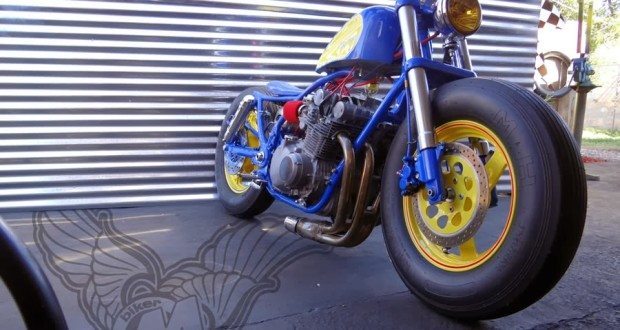 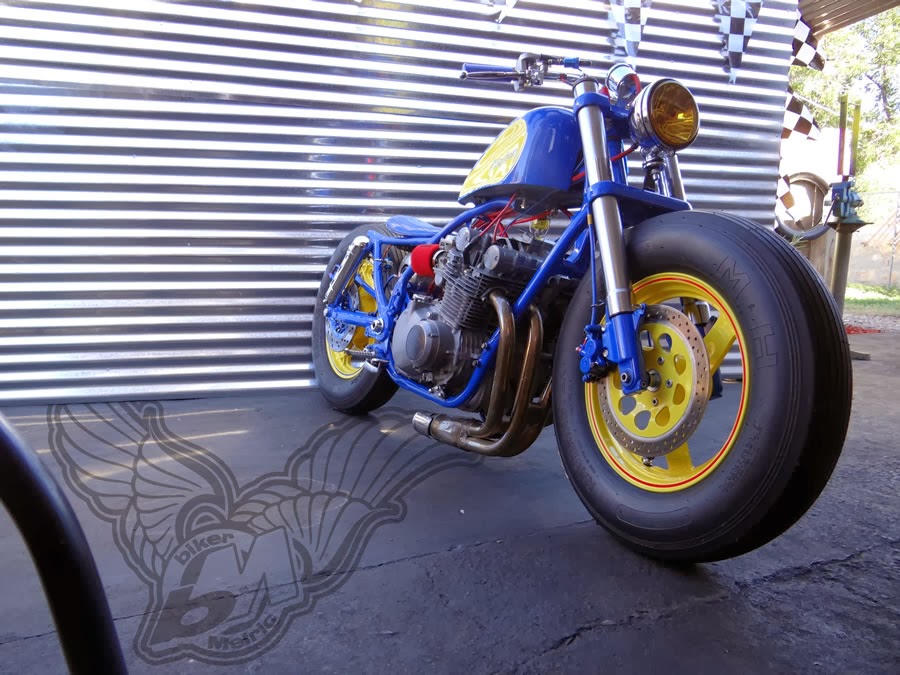 1980 Hairy Canary GS850 – Brotherly love, and the bike from a pistachio farmer.

Jenny and her husband Mark are El Paso, Texas natives with a custom bike built for his brother, and and equally cool story to go along with the build. Mark’s brother Rick, a resident of Florida, wanted to have a bike built to remember their father by – and Hairy Canary was the result.

Their father was a passionate motorsports enthusiasts with plenty of wicked and wild toys. There dad had many cars but one from the mid-60’s was the most memorable for the brothers. It was an old Chrysler station wagon that was chopped and shortened. It was painted a vibrant yellow with blue tinted windows.  The doors were welded shut.  It had wide sand tires front and rear, no fenders in the front, and emblazoned on the door on either side of the car was a big cartoon-style canary.  Above each canary were the words Hairy Canary in blue to match the tinted windows. Once the plan was set for a tribute bike Mark’s brother and he did some brainstorming to refresh his memory as to exactly how the car had looked all those years ago.

Mark and Jenny got the bike for the build from Chapparral, New Mexico, after traveling down desolate dirt fire roads to meet up with the nice couple selling the bike who were retired pistachio farmers.  Piling into the farmers pick-up truck they drove out to the GS that was among other vehicular relics from the 80’s left out in the desert sand and sun. Mark came across the tired Suzuki up to its wheel hubs in sand and in completely stock form. 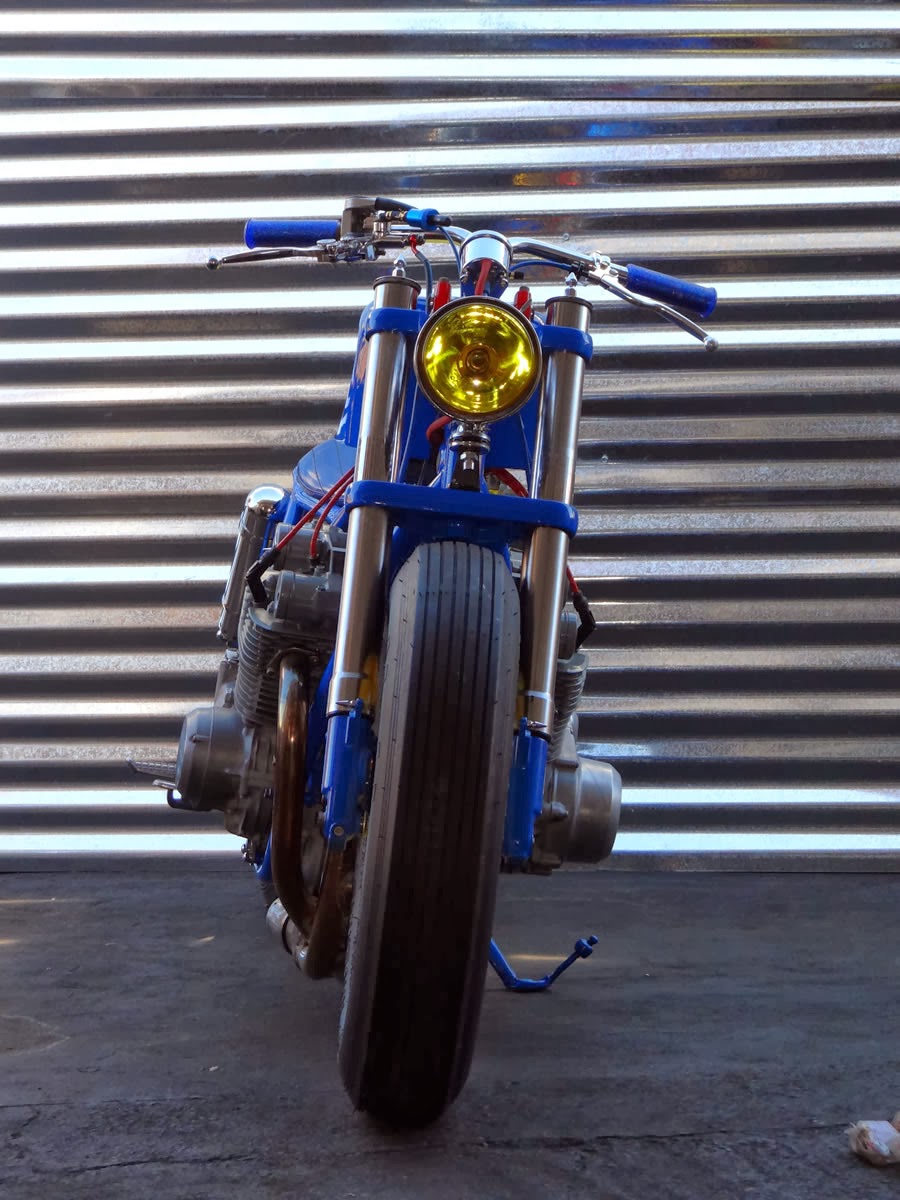 Building up the bike in honor of their dad started by stripping it down. Mark took the motorcycle complete apart, sandblasting many parts that had been roughed from a couple decades of decay. Once smoothed to satisfaction he repainted everything with Omni urethane and PPG clear coat.

The frame was altered slightly at the backbone to accommodate the Sportster gas tank, and was shaved at the rear by removing unneeded tabs previously used to hang bodywork. The utility box under the seat is used to store the battery and the electronics for the bike is actually a re-purposed ZX-14 exhaust canister. The graphics were skillfully designed by local shop Rigo’s Graphics. The handlebars were hand built in-house and the front master cylinder is a billet fuel filter of the spin-off variety.

The tires are M&H drag strip style front runners meant for a car. The front forks demanded heavy fabrication as they were sourced off a 2002 Suzuki Marauder 800, sometimes you’ve got to go custom and other times you can achieve the look you want by modifying a bit off a different bike. The headlight was ordered right from Harbor Freight that was given the personal touch of yellow lens tinting. All of the cables; throttle, clutch, etc. were skinned and painted to match the frame for that ‘clean’ look. 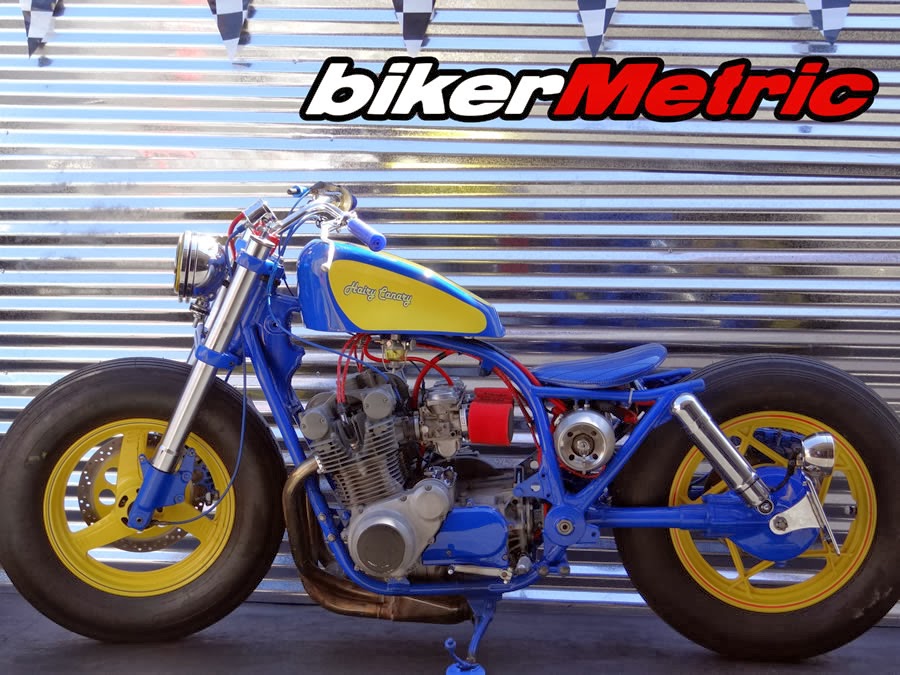 The petcock was originally from an old farm tractor, when Mark saw it he knew the clear bowl-look was what he wanted.  The bottom of the Sporty tank was tapped in order for the petcock to be fastened in place. Matching the headlight the petcock bowl was tinted yellow as well – its subtle differences like this that make the difference.

The Carbs were cleaned with new kits installed and off-road style UNI air pods were matted to the bike.  Overall the bike was dropped to improve the look and stance, which worked really well with those oversized tires and vibrant livery. The header pipe is a donor from a 1999 Suzuki Bandit 1200, which gives the bike a very nice deep sound.  Has a very nice sound.  Very low, deep sport bike sound.  Lastly, the grips, seat and bobber-style chrome taillight/license plate holder were all purchased through Ebay.

Speaking with Mark and Jenny their passion for motorsports is clear, and the bike itself is evident of Mark’s ability with a wrench. We like that this GS is different from most other builds that start life as the same three decade-old Suzuki model and it’s really cool that this bike is literally built off found memories. Kudos to you Mark. 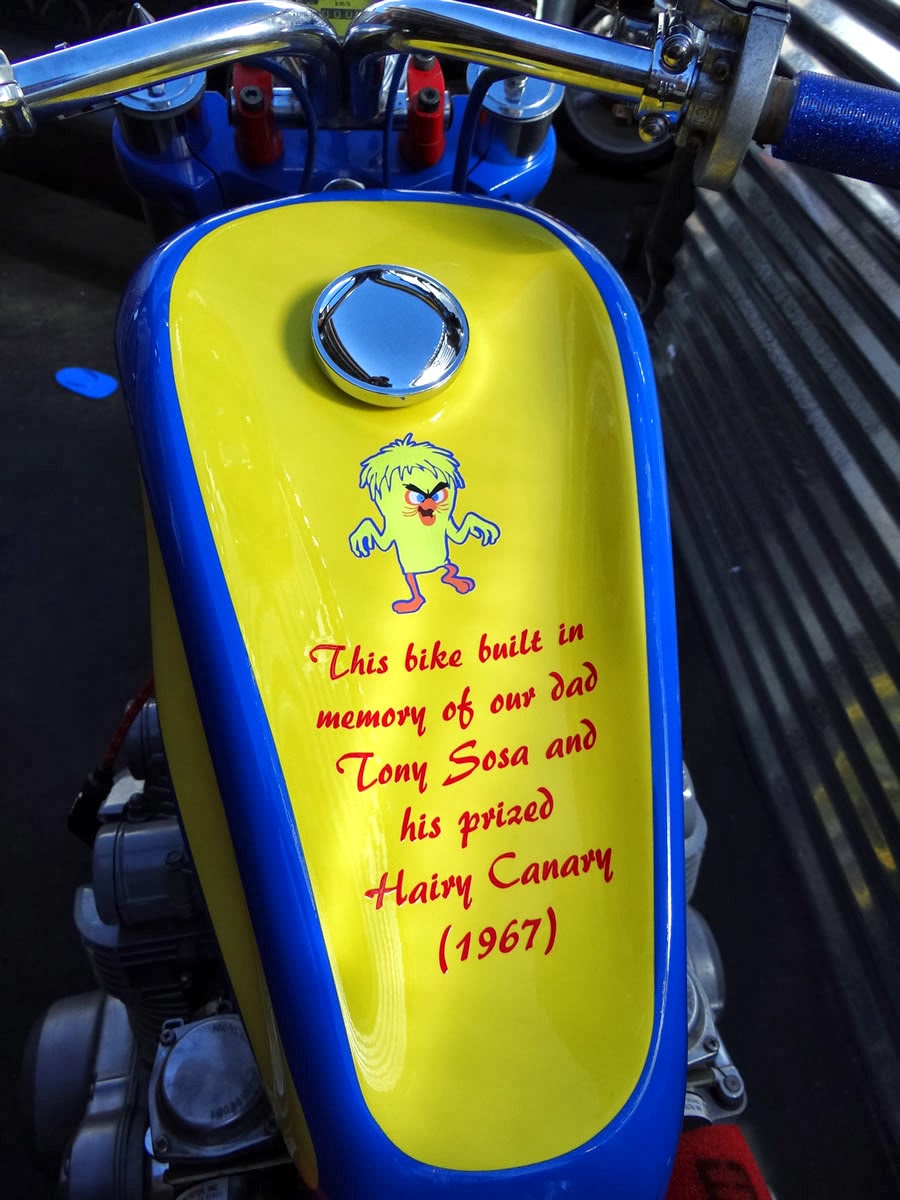