Home / Friday's Post of Cool Stuff / friday’s post of cool stuff #58: the pimp & ho tour, godfrey vintage, and the end of the world 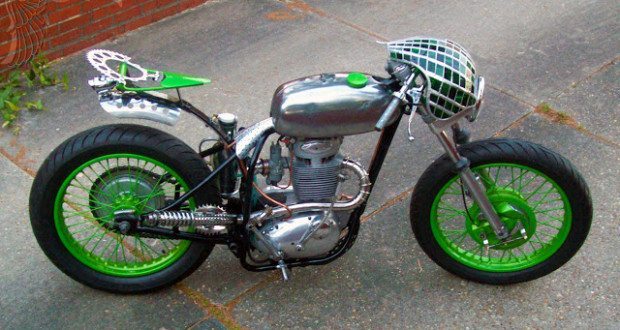 friday’s post of cool stuff #58: the pimp & ho tour, godfrey vintage, and the end of the world

well, motherf***ers, i made it. working off my philosophy of selective brain cell death means that now i am smarter than before. how so? well, when i drink and kill brain cells, i concentrate on killing brain cells that are not using energy. it’s eugenics of the mind. the myth that we “only use 10% of our brain cells” is a lie. ever seen a c.a.t. scan of a brain? everything is firing. everywhere. what i do to be smarter is focus on the portion of my brain that, um, what was i writing? i forgot. anyway, go brain! 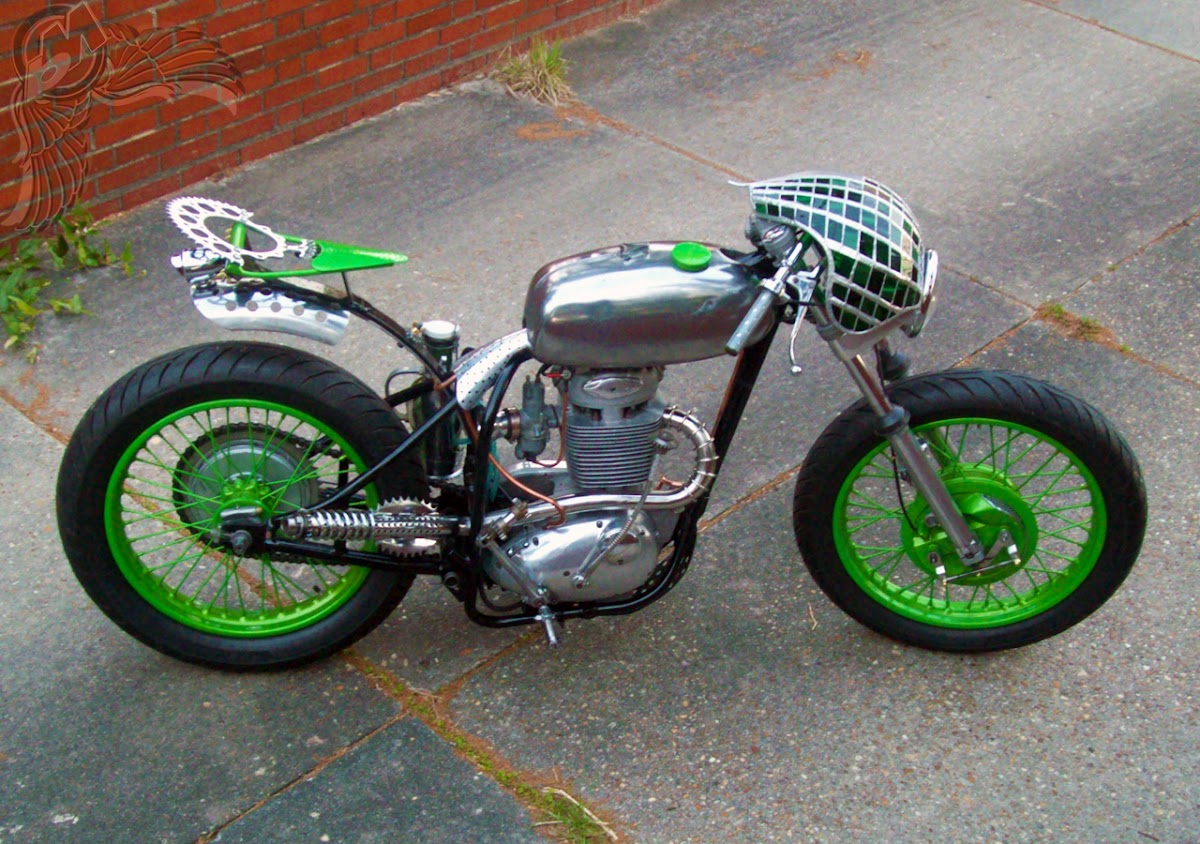 oh yeah. the the bikerMetric Pimp & Ho Tour! we had a blast and i will try to tell a story while reminding you that the end of the world is happening as you read this because the ***/father/clone of jesus is gonna rapture (or is that rupture?) a bunch of people to heaven and f**k up the earth with vengeance starting with earthquakes and ending in cannibalism.

please. like the army corps of engineers, bp, and your bank doesn’t do that to you already. besides, with all the rich, soft, white christians raptured to heaven, i’ll have to kill pigs instead for soft, white meat to eat. and i’m jewish! it’s a nightmare! **** on earth!

if it happens, i am so looting a church. 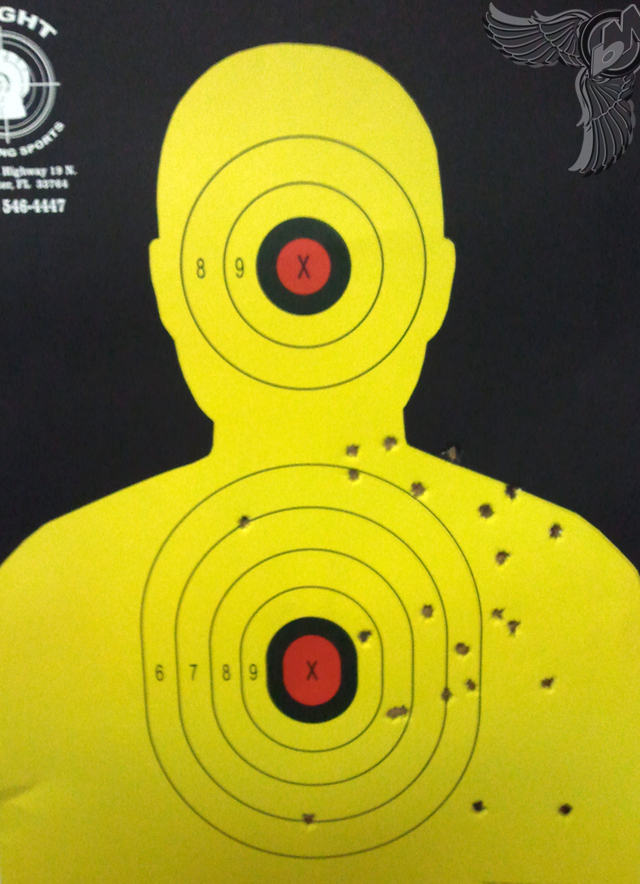 speaking of jews, i shot a few bullets at the neck, a few at the heart, and a few at someone i pretended was right-handed at this target from 30 feet away. or so it seems. thanks to mark, the owner and former paramilitary madman from israel at knight shooting sports. he let the ho, eric, chris, and me shoot tons of semi-auto handguns, mostly .45 and 9mm, full and mid-sized weapons, until i began shaking in anticipation of tagging a banker or some executive from an oil company. for all you second amendment mofos riding anywhere near tampa/st. pete/clearwater, there is only one place to either bring your own or rent a weapon, and it’s mark’s knight shooting sports. tell them the dumba*s madman at bikerMetric sent you and get treated to an upsell and a lecture on how french canadians suck. 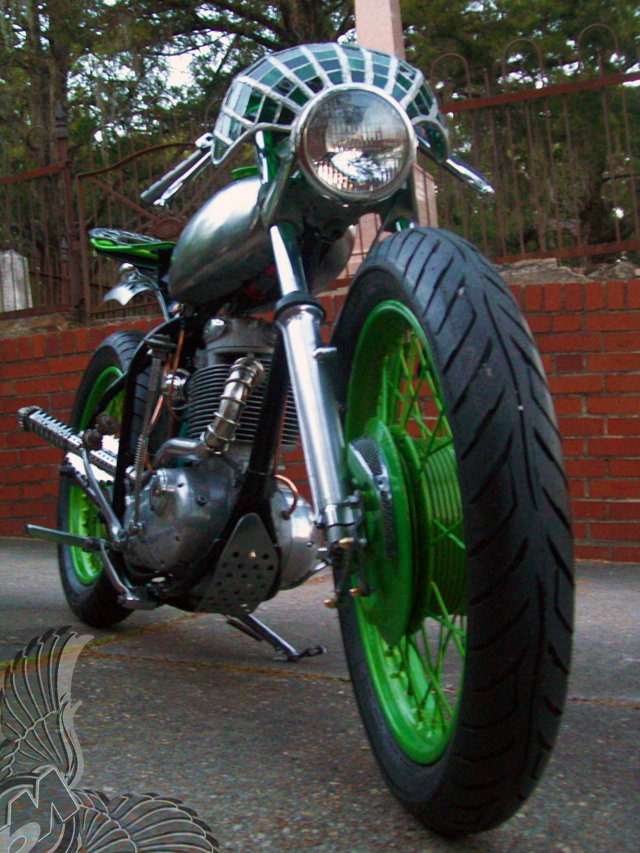 if the life of yeshua the messiah proved anything, it’s that *** loves and forgives us. the days of reckoning in the face of ***’s wrath is the myth of a dead religion and a dead ***. my *** is reborn. my *** forgives me. my *** says it’s easier for a camel to pass through the eye of a needle than a rich man though the gates of heaven.

so stick it to the corporate man, motherf***ers. cancel your accounts at chase, b of a, wells fargo and all the big banks who you know damnded well are ripping you off if you take the time to go through your statements to see. go local. go with a credit union where the bank is owned by those who set their money within their walls. oh, and buy silver. buy silver now. it’s gonna go up, then down, then back up. watch. 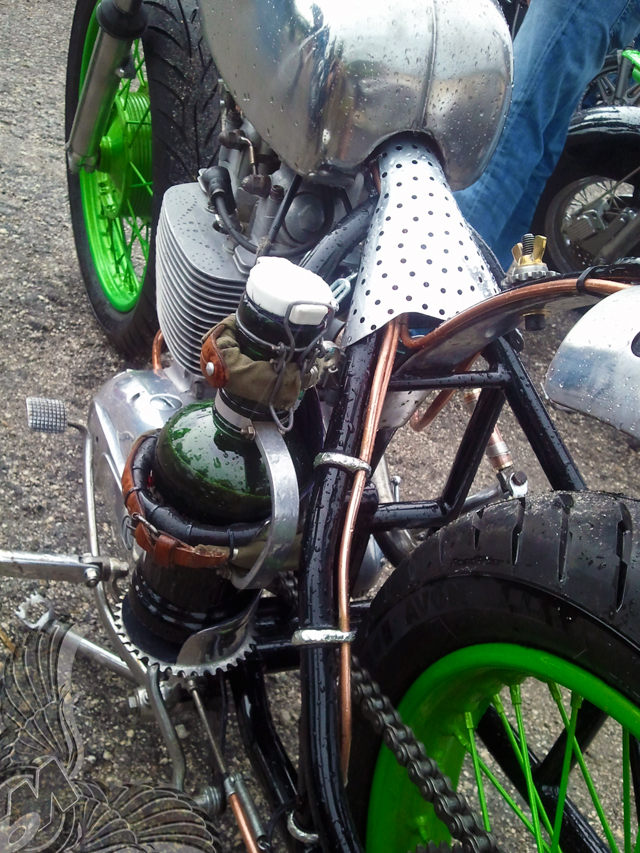 now for the most radical metric motorbike i found at the dime city something or other, if you haven’t noticed already, the bsa recycle bike by godfrey vintage. it’s actually called the “godfrey recycle” because what you’ve seen here has only $700 worth of expenditures, including the donor bike. it’s the bike of the apocalypse because all your paper money will be worth nothing and the builder, scott taylor from jacksonville, florida, traded and bartered for most of what you see here.

i may have posted that vid before but i always wish to remind my readers to stick it to the corporate man, and tonight that man is the irs, motherf***ers. stick it and remember, they use your own money to enslave you. avoid credit cards and even atm cards at all costs. use cash and did i say “buy silver” yet? yes. i did. because paper money is just paper. it was once worth silver or gold but now it’s bulls**t that will burn. f***ers. it is my not-so-humble belief that the only way humankind will survive is to start trading skill for skill, product for product, leaving money out of it and surviving in communities where we all work at what we love and create things our neighbors want, where 40 hours on any project is worth the same as 40 hours on any other project. 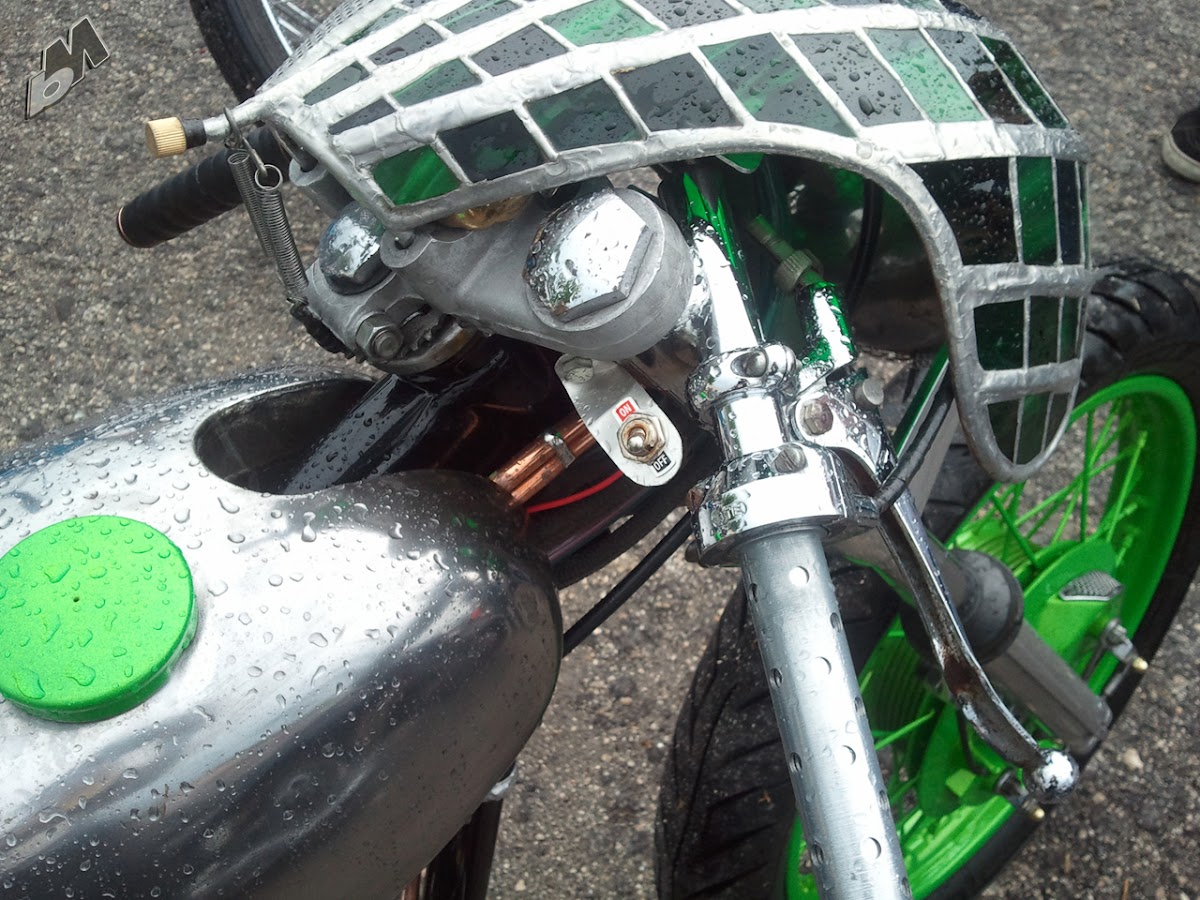 you may say i’m i dreamer. 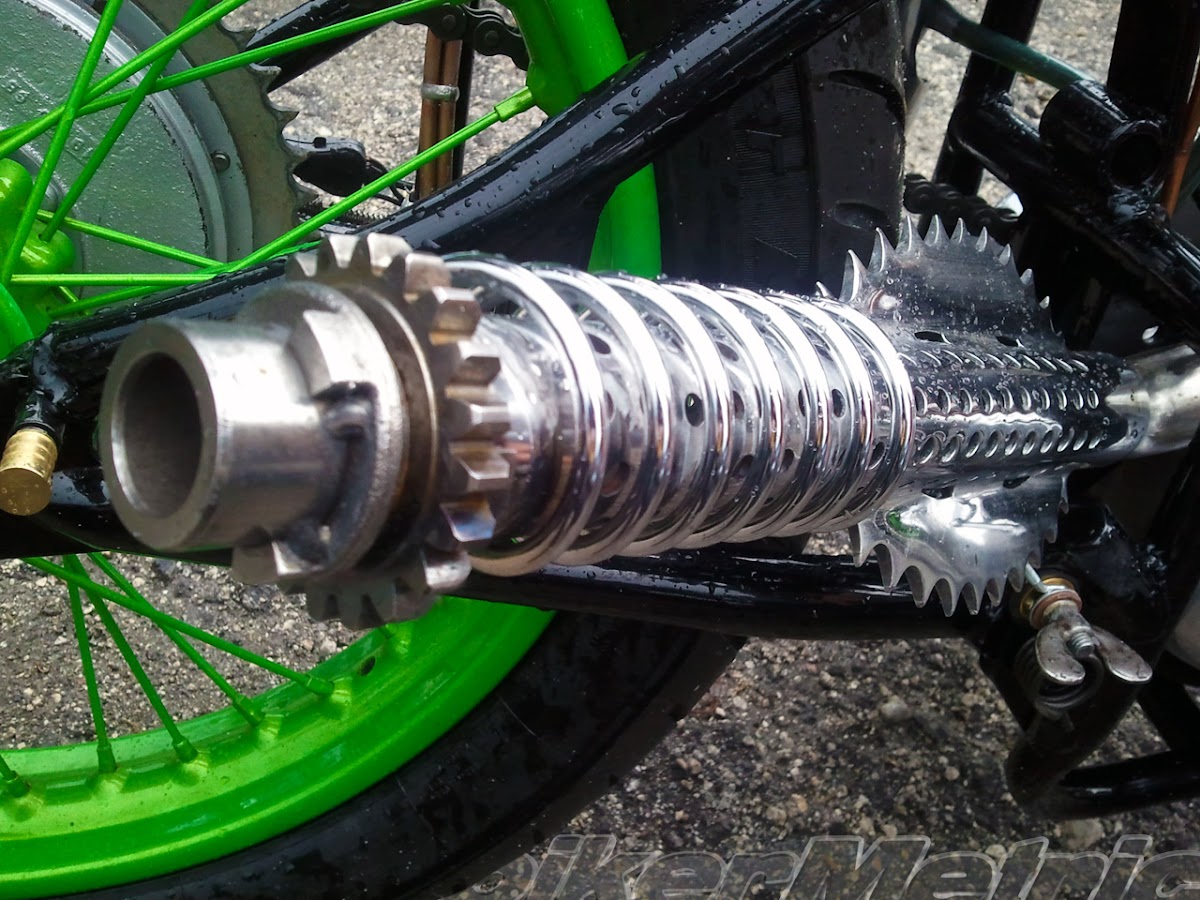 where else can you see this bike? where else can you find that no, godfrey vintage has no website and i am not giving you scott’s number? what i will do, because i love you and wish you’d rise up and start hurting your corporate masters, is give you his email: godfreyvintage at yahoo. if you can’t figure that out, click this link and screw off. he is a good man so don’t be a douche. 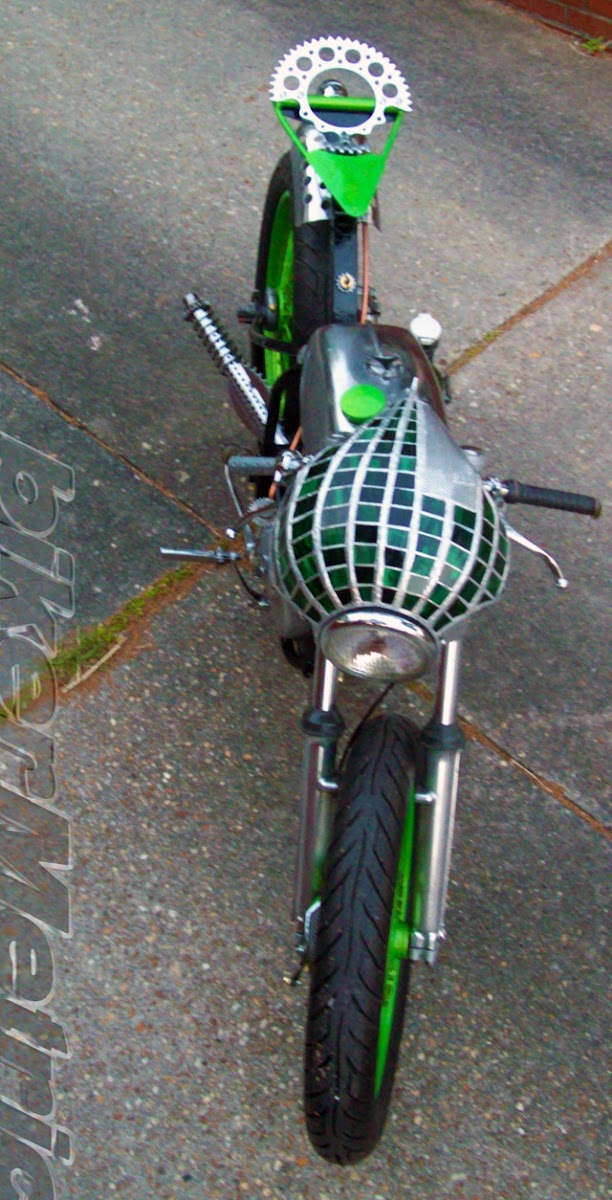 according to scott, “when i got the bike it was a very stock looking 250 enduro with a 441 victor engine. i rode it that way for a while, but hated how it handled off road. i got the bike for taking a tree down and from the start it cost me no money, only labor. i have always been frustrated with what’s available for custom motorcycle parts so i made everything myself from items other people felt were landfill worthy. i’ll try not to go too crazy, but here it goes:

the seat was the first item i made and it was out of an old compressor tank, a scrapped sissy bar, and a trashed renthol sprocket. when i was walking through my friend’s yard one day, i found the leaf spring in the bottom of his burn pile. i f***ing fell in love. then i made the oil tank out of an old bottle and the piece that holds it was out of scrap metal that was left over when i chopped my 64′ chevy van. i rolled it on the english wheel to fit the bottle and the base is out of the drive sprocket of a yazoo lawnmower i got out of the trash.

the fairing was a crazy idea i had after salvaging stained glass out of a garage that had been crushed by a fallen tree. it doesn’t seem like it would work, but lead, glass, and copper together are suprizingly strong. when i modified the frame i used all the recycled metal to build the new frame. the many fit and finish pieces i dressed the bike in were all out of old kitchen items being thrown away. the transmission out of a suzuki dirt bike with all the gears and kickstand foot.

finally, i made the exhaust out of another old sprocket, another transmission gear and an old seat spring. they were welded to a scrap piece of exhaust pipe i got from a muffler shop. the 700 dollars spent was on a set of avon tires, green powdercoating, brass hardware, and a few other small items to make her run. the clip-ons were given to me by a friend.

i hope this helps you out, trent, and thanks again for your interest.”

dude. you created the interest by building this bike.

i have so much more to tell you metric mofos, but it must wait until another day. tomorrow, hopefully. the life of the gypsy has bitten me and i like it. i still have to tell you of the dirtiest strip bar in the south, where the hottest chick was cross-eyed and involuntarily spasmed in withdrawal as she did her best to get me to, um, yeah…. 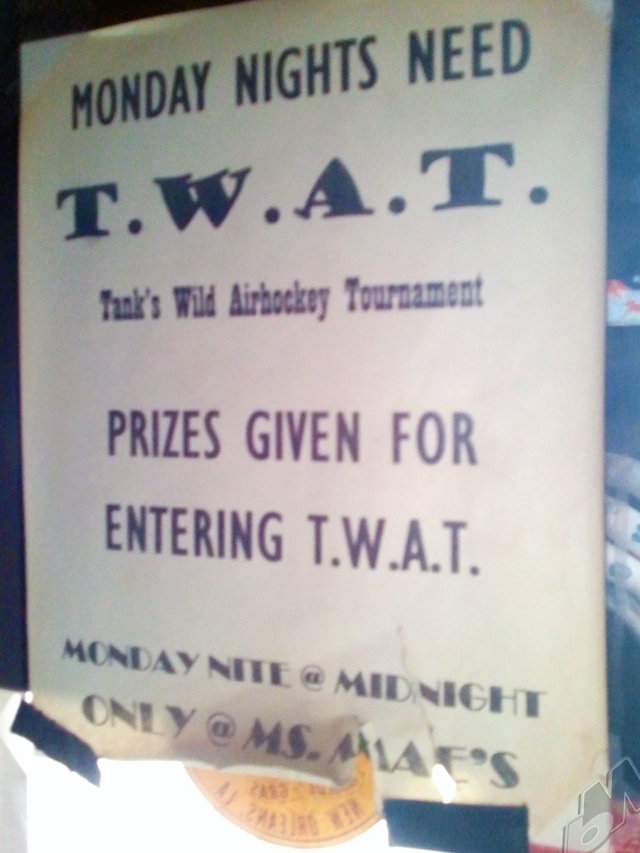 Previous: no new posts?
Next: hanging out in a garage 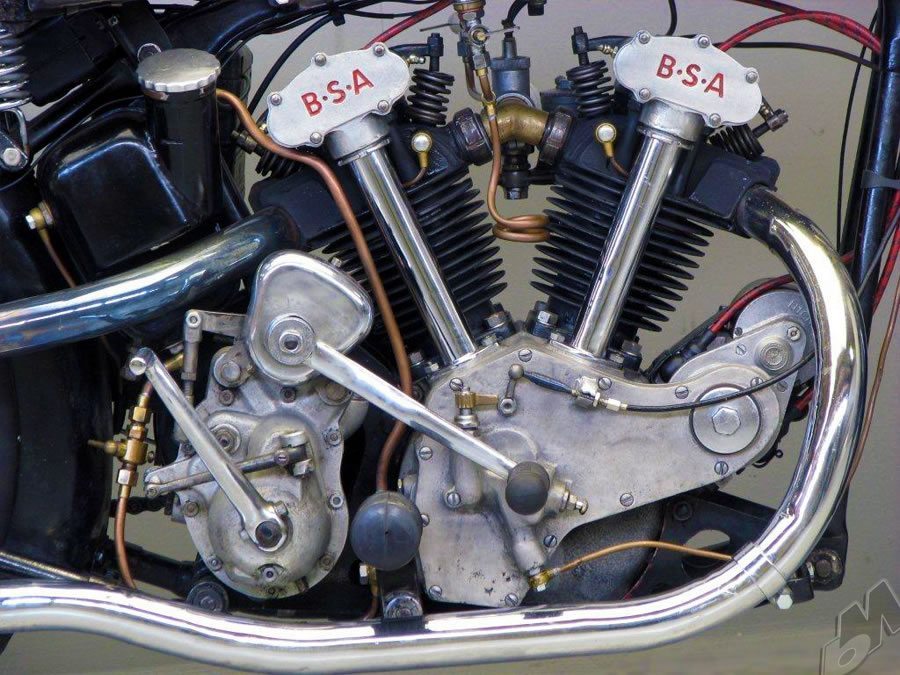