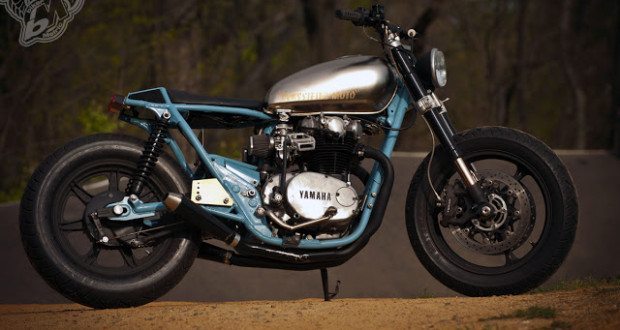 i like john ryland very much. we’ve been acquainted for over a year and he even sent me a classified t-shirt last may. he stays in touch and writes nice things to me, which baffles me greatly because i am often such a smartass or simply rude because there are moments when i am fed up with bulls**t and take it out on the unsuspecting who first appear. poor john, he’s always true, no matter what. 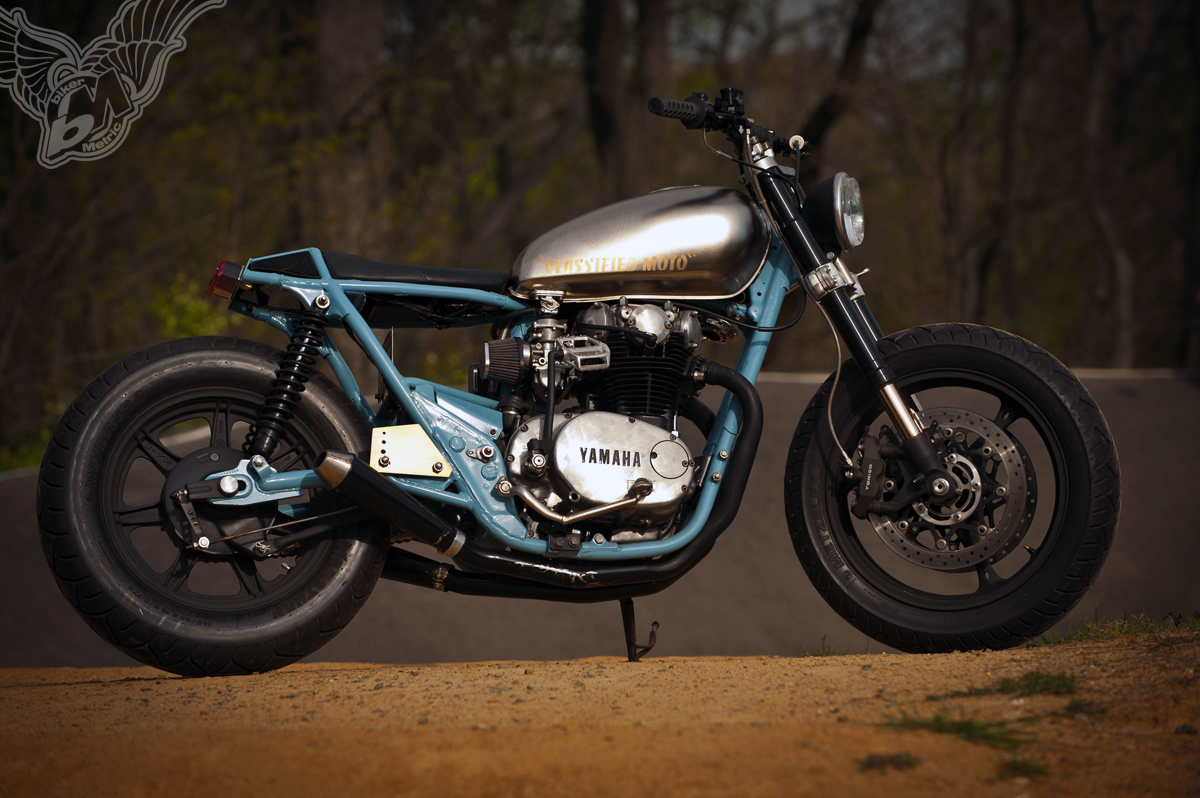 last month i noticed he was building an xs650 that didn’t look like the standard classified moto fare, and i asked if i could put it online first. yeah, right. chris hunter had already snagged it and this site is a fraction as popular as his. probably because i often take charles bukowski’s or hunter s. thompson’s bad advice instead of sticking to repetitively clean motorcycle post after motorcycle post. it’s really what the masses want. they want sanity. i speak to the fringe who understand the motorcycles on bikerMetric are merely a front for revolution.

so here it is, “the ripper,” two weeks later but with some original photos taken by patrick biedrycki and a bit more to the story of classified moto’s xs650 build. 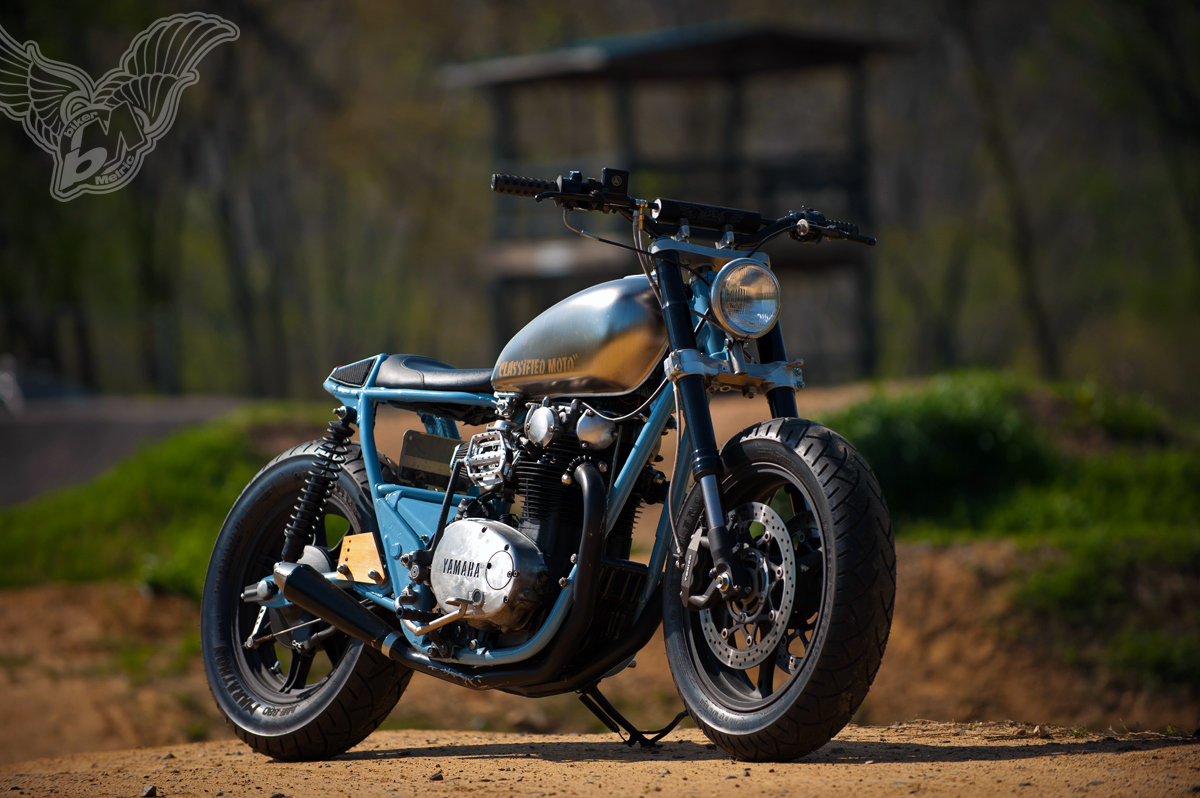 as john tells it, the bike happened to be finished right as he was celebrating his one-year anniversary of getting laid off from his old ad job. what is it with ad guys and motorbikes these days? i bet there are at least 20 custom builders – and websites – run by current or former ad agency wanks. regardless, if any build ever made john doubt his new moto career, it was this one. the process was a drag.

that is why it was extra sweet when they finally got to have some fun and shoot this thing. john and his lovely and collaborative wife rounded up their kids and their friends and headed to a local bmx track with a bunch of camera gear and no real plan. john promptly wiped out on a bicycle twice. it was the kind of sheer joy needed to be released after the pain of the build. the bumps and bruises metaphor…. 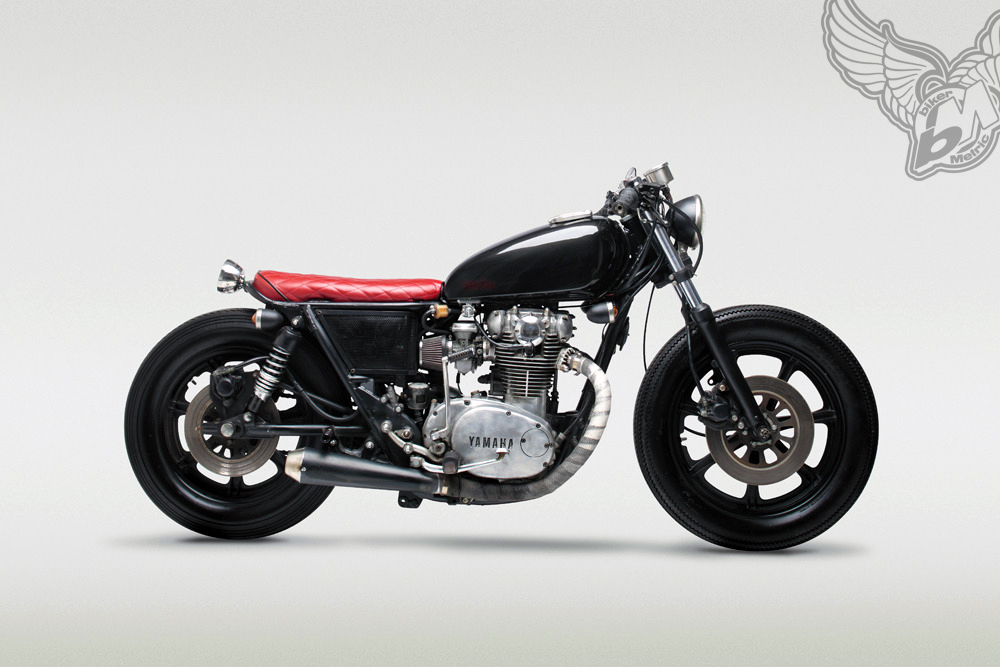 the bike is a 1981 xs650 with a late model suzuki gsx-r front end. john jetted the carburetors and made a low-tech custom exhaust fitted together from pieces off their friend cindy’s now-wrecked classified xs650, “lefty lucy” (photo above). john slapped on metzeler me880 tires, relocated the battery and electronics to give it the classified “skeletal look” to mimic the feel of a bicycle. they also added two custom-machined anodized aluminum plates for mounting cameras down low on either side. i imagine we’ll see a fun video utilizing that setup relatively soon.

the frame was powder coated baby blue to match se racing’s “mack daddy of all bmx bikes,” the “p.k. ripper.” john wanted one badly when he was a kid and a little notoriety got him one to match the xs, thanks to bmx legend todd lyons at sebikes.com, who also hooked classified up with graphics and artifacts for this build, which, to remind you, sucked. here are some reasons why…. 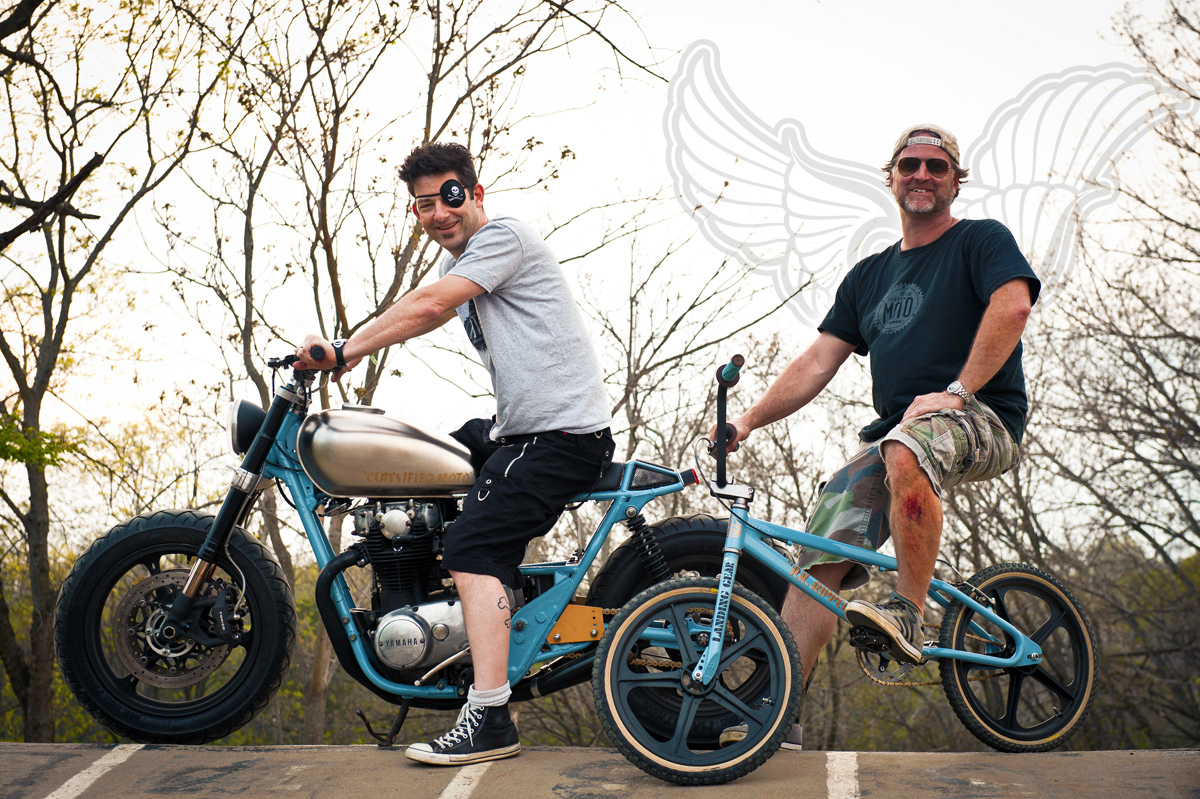 after agreeing on a direction with the intended customer, “things started to go off the rails.” john already stood to make very little on the build, and with suggestions coming in on a steady basis about tanks, paint schemes, bars, upholstery, tail sections, and more, the classified crew was starting to wonder why they were building this one. the original bike was supposed to be the raw, classified style in black and nickel, but now one of the suggestions was a baby blue painted frame. instead of rejecting the idea as he normally would have, john thought it could be an homage to that childhood memory of the pk, which came out in powder blue in 1981. 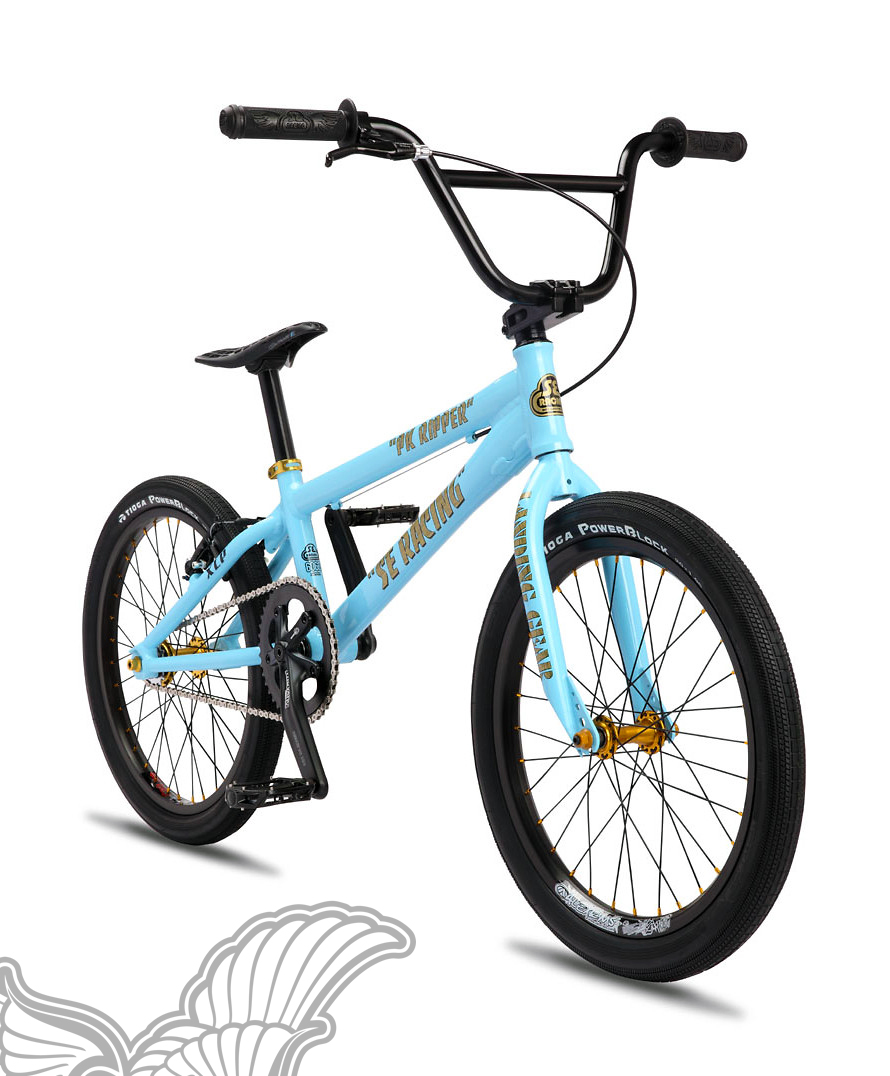 running with that as more new ideas continued to stream in from the client who realized the more the classified moto crew loved the way the bike was shaping up, the less he did. it was almost finished now and he thought it was beautiful, but “it just wasn’t him.” he wanted an all black cafe bike, something john had been resisting making since the build began back in the photoshop design stages.

the customer had all but paid for the bike and had asked for all these changes so it would have made sense to stick it to him and say “you got what you wanted.” i’ve done that to design clients. we start off with a conversation about their needs and wants and i take notes. i then write an email to the client to verify i have a firm idea from them. they reply, “yes,” and i send them a contract stipulating what they will receive. the contract states that they get three revisions total. after that, it’s $50 an hour. can’t tell you how many clients have gotten upset at that point but that’s what they get for being indecisive and not letting a professional do his job in his style, which attracted the client in the first place. i’m feeling for john. it is a crappy place to be when you’ve done all you can to please a client and it isn’t enough. fortunately for me, i’m an ******* and the client gets what they got so far or starts with some more cash before i do anything else. 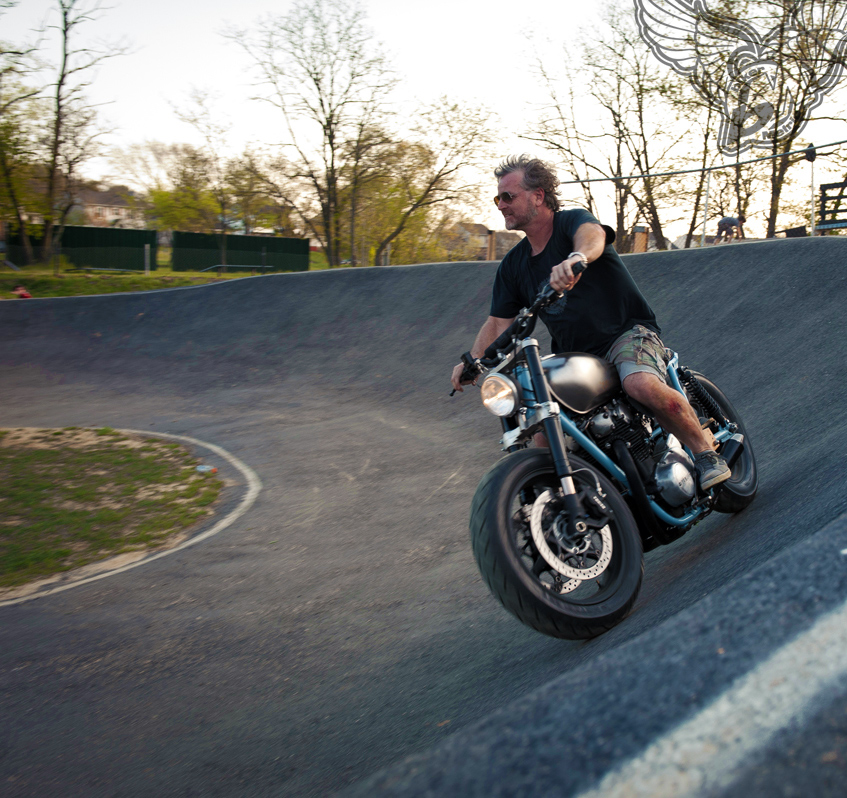 as i mentioned at the start, john is true and a bit nicer than i am. he didn’t want the client to be stuck with something he didn’t like, and he wasn’t going to start demanding more money, so the classified crew shuffled a bunch of stuff around. the ripper now belongs to photographer adam ewing and now john owns adam’s classified-built “yamazuki.” 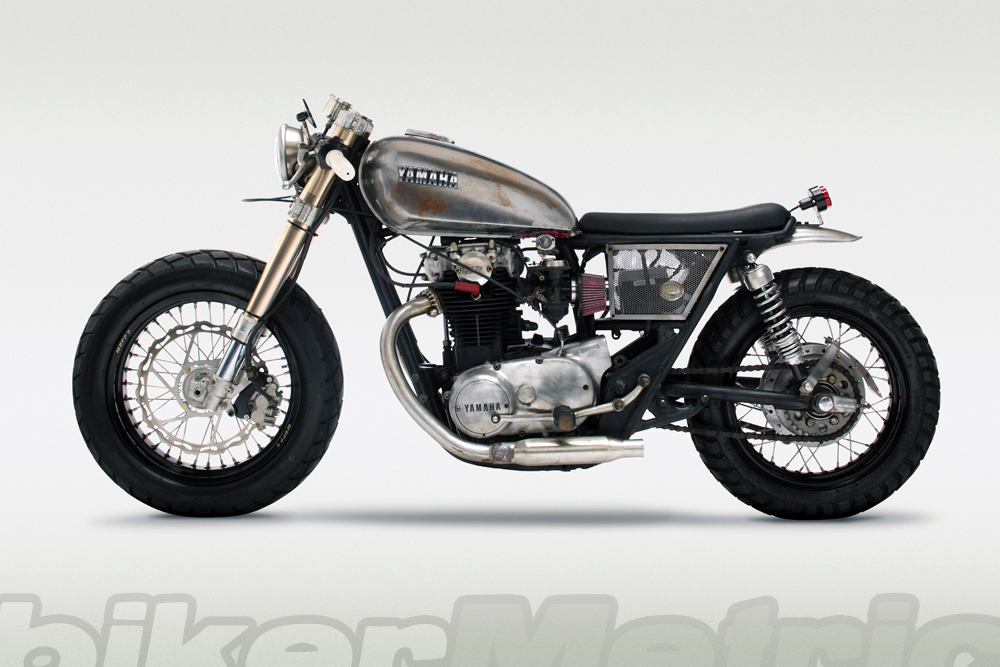 the customer got a blacked out ducati monster 600, the one john rode to pike’s peak, but now more black than before.

everybody is happy now. 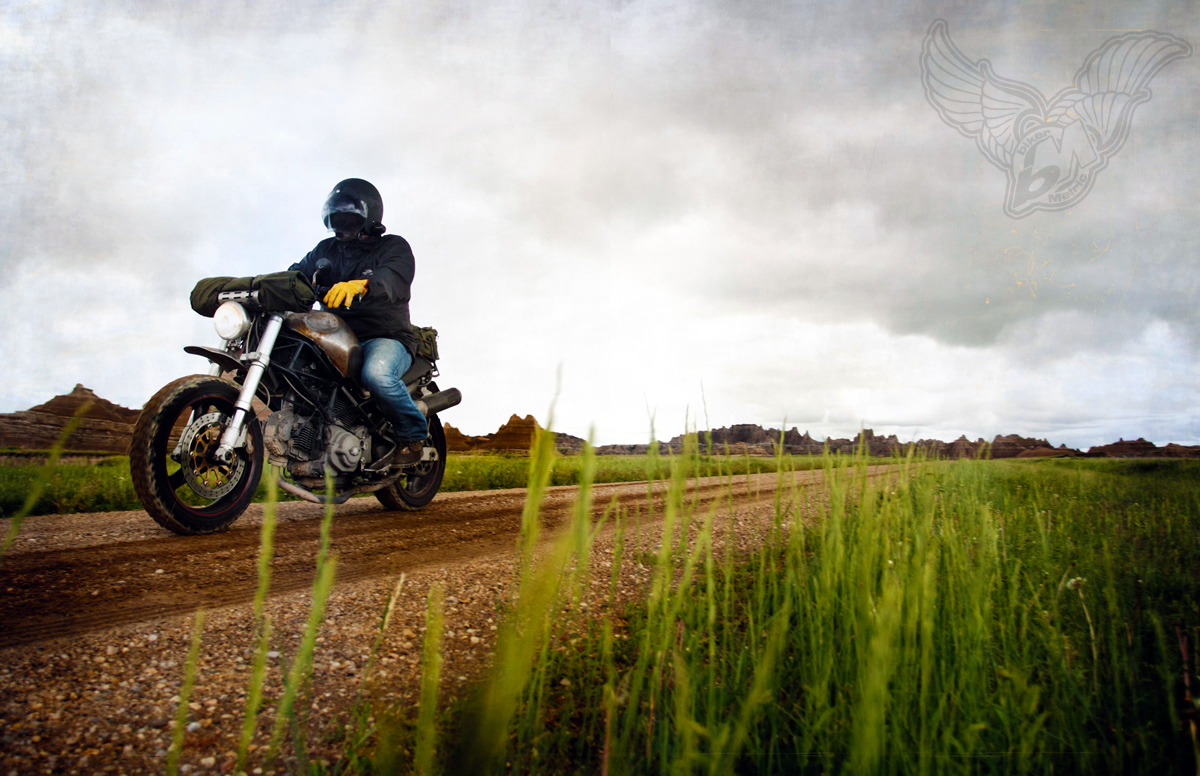 take a gander at classified moto’s website, there are more than motorbikes there and if you see anything you like, tell ’em that madman from bikerMetric sent you. 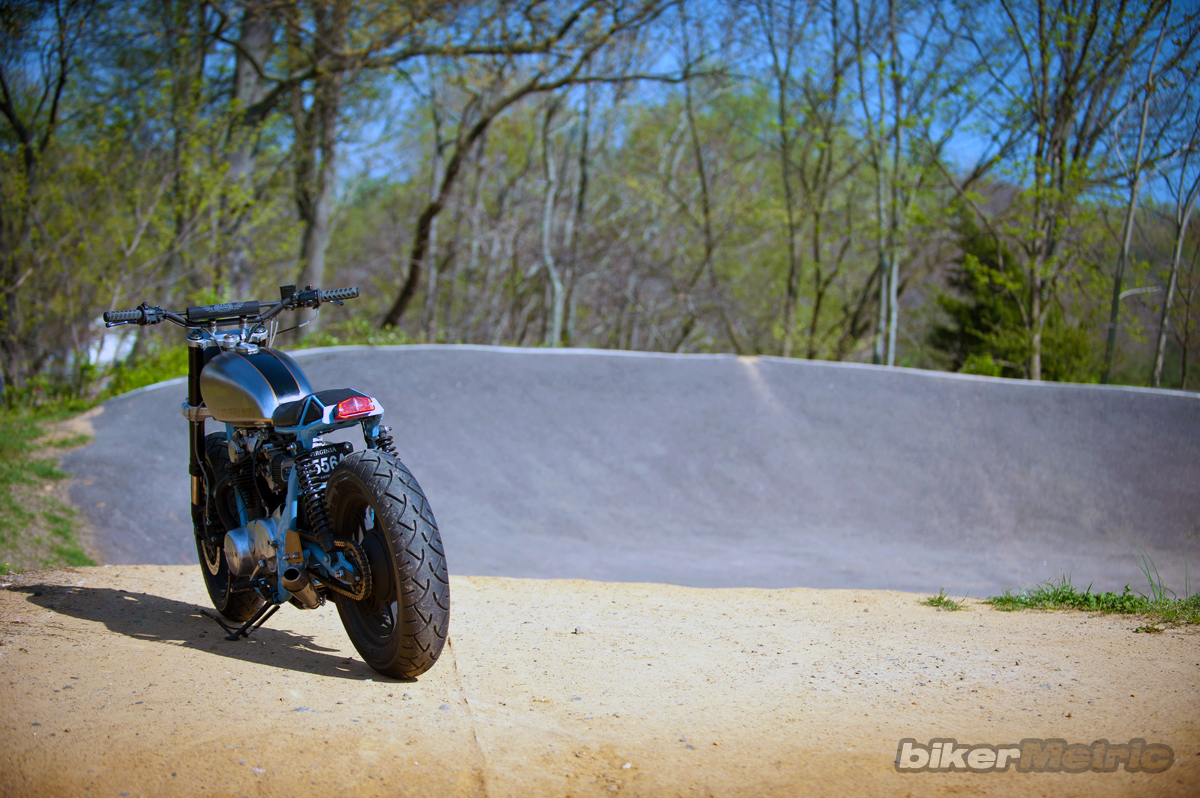