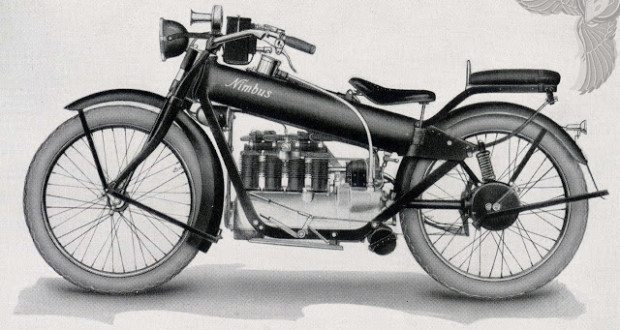 nimbus motorcycles was a partnership between peder a. fisker and h.m. nielsen from copenhagen, denmark. the bike was a 750cc inline-four. 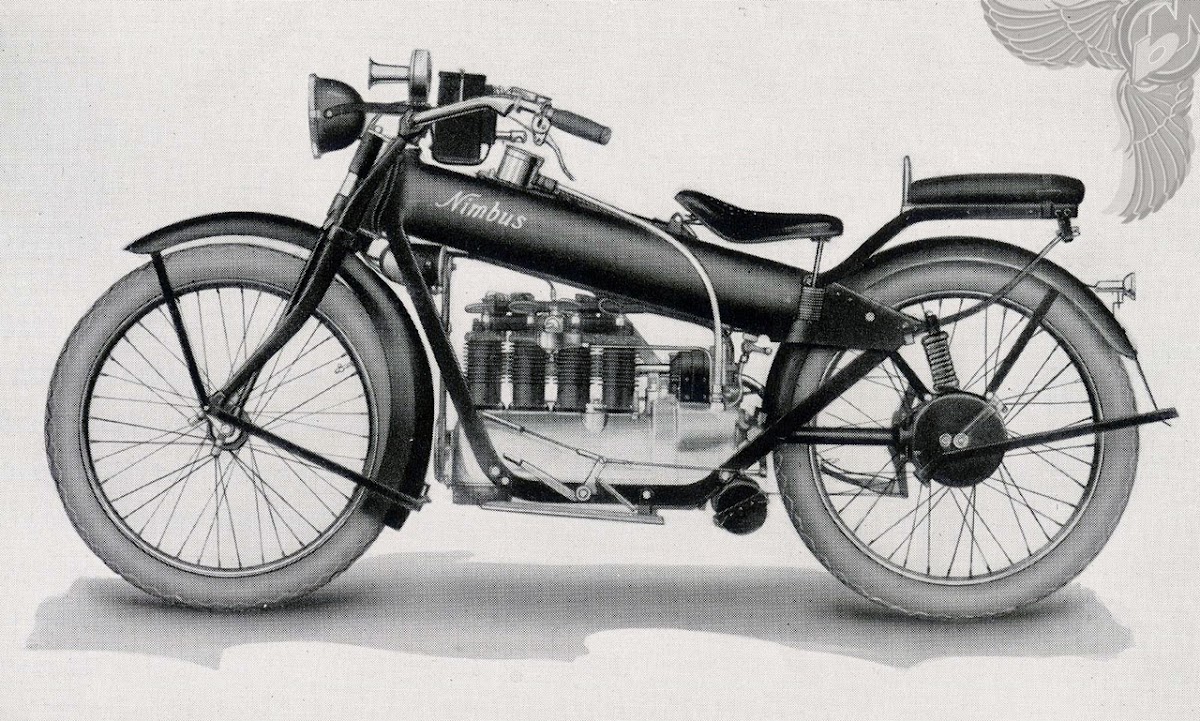 the company was formed in 1905 to manufacture electric motors and in 1910 their “nilfisk” electric vacuum cleaner was made. it was a great success and sold all over the world.

after being particularly offended by seeing the engineering of an unknown motorbike parked on the street, peder fisker believed he could develop a motorcycle that had superior form and in late 1918 decided to construct a prototype of his own. it was the model a/b and had a four cylinder inline engine of 746cc (45.5ci).

some of the rare elements on this bike included the shaft drive rather than a belt or chain most often used at that time. it also had both front and rear wheel suspension.

it was an innovative design since no steel tubing was used in the frame. flat steel strips were used with a long and cylindrical fuel tank welded in place instead. this led to it’s nickname, “stovepipe.” the bike made almost 10 horsepower, a decent amount for the time, and it’s top speed was around 50mph/75kph. 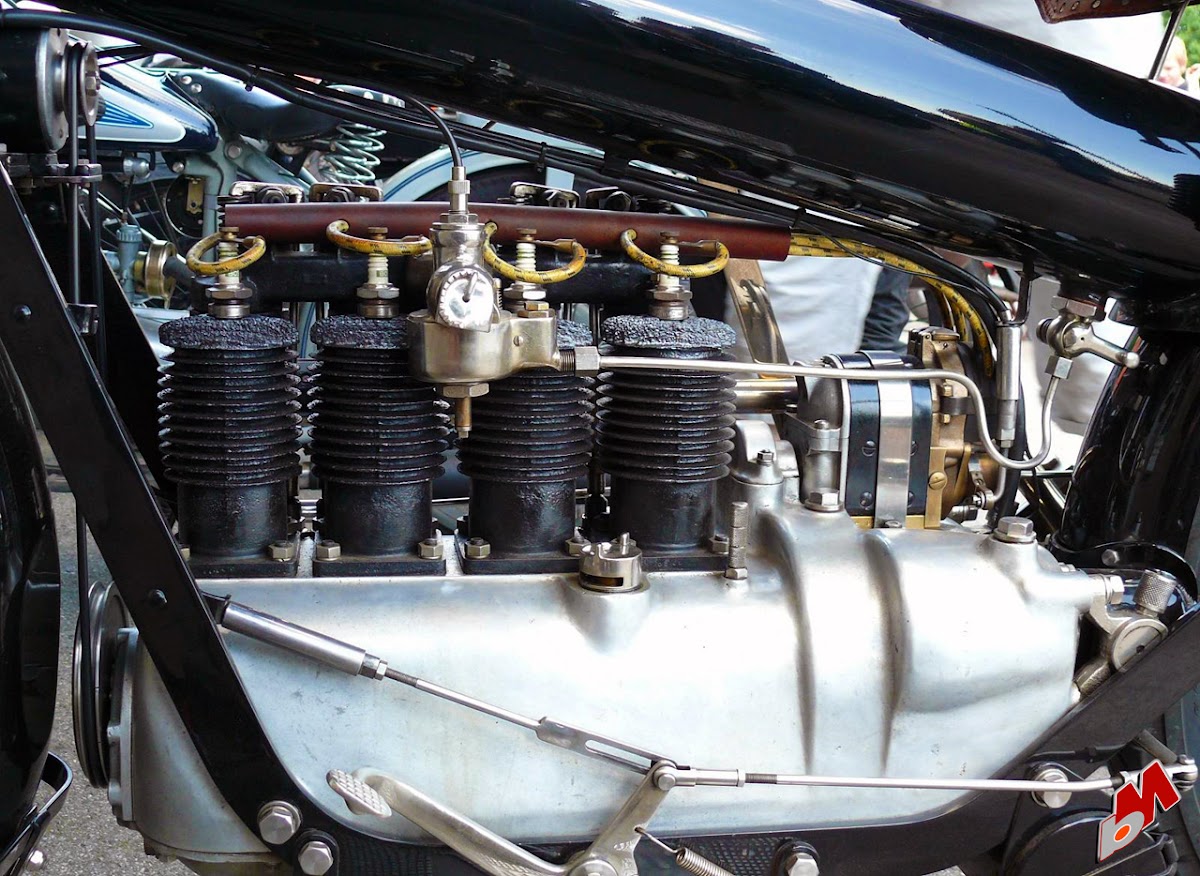 two more machines were constructed in 1919, but mass production did not begin until 1920.

sales were disappointing so fisker began entering the stovepipe in as many races he could, often with a sidecar attached, building a good reputation for the machine. however, the introduction of a large sales tax on motorcycles in denmark in 1924 and an economic recession resulted in production being gradually phased out by 1926 after 1,300 machines had been produced.

in 1932, with his son anders, fisker started designing a new motorcycle and in 1934 they unveiled a new nimbus motorcycle, the type c. it had a completely redesigned overhead valve and overhead cam engine of 18 horsepower, and a frame made from steel strips riveted together, which were shaped to go around the gas tank. it was the first production motorcycle to have a telescopic fork, and the type c continued to utilize the shaft drive from the stovepipe. 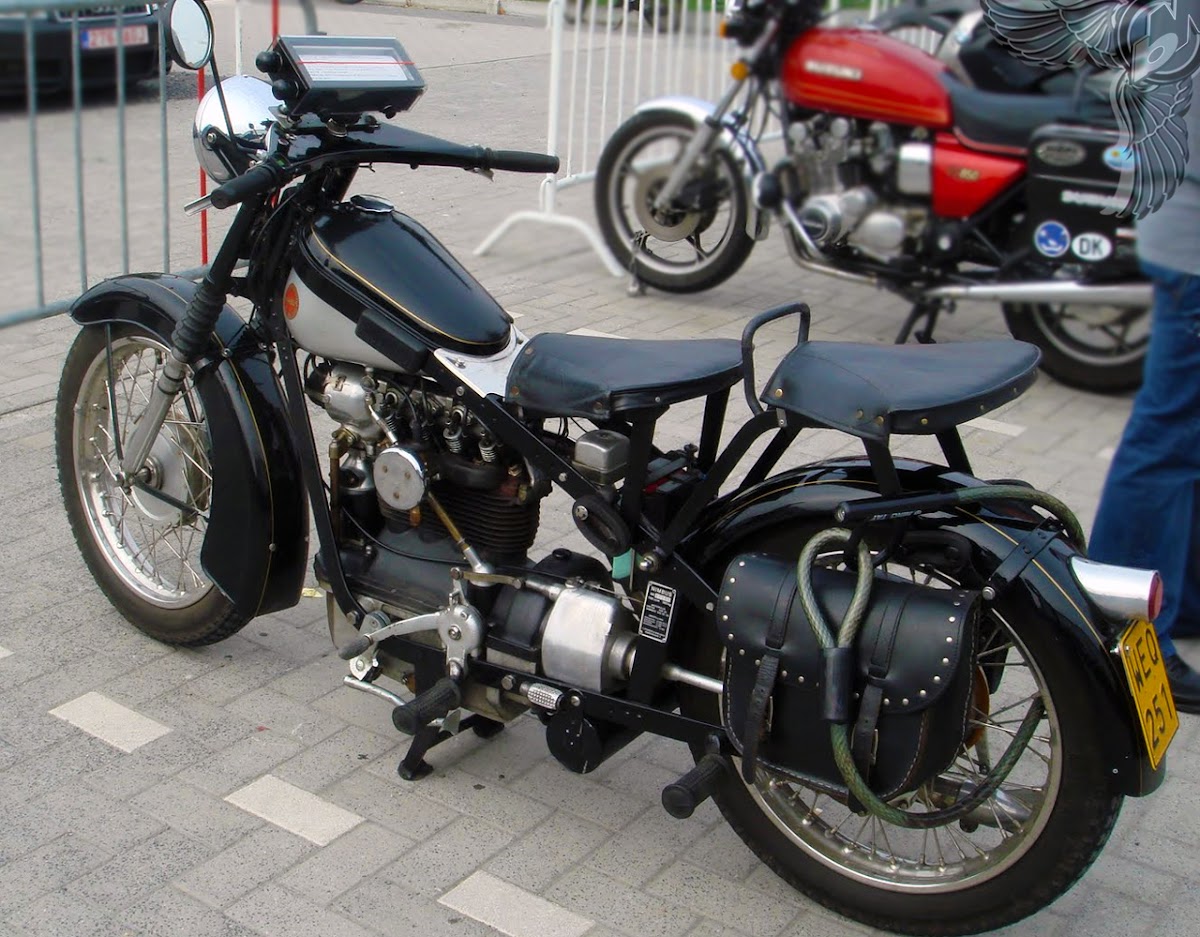 almost 13,000 type c motorcycles, also called “the bumblebee” due to it’s humming exhaust note, were produced by nimbus between 1934 and 1959. the handlebar was unusual in that it also housed part of the electrical system and the speedometer until after the war. the frame was made of strips of steel plate riveted together so it would be easy to repair if damaged. the danish army, postal service and cops were large purchasers of bumblebee motorbikes.

world war two made it difficult to manufacture the cycles, but nimbus managed to hold on and stay in business making tools. after the war, no major changes were made to the original type c while minor changes were periodically implemented, such as raising the horsepower to 22.

as time went on, these bikes became outdated by their slow speeds and obsolete technologies. even so, they were known as reliable and strong runners. in 1960 nimbus delivered it’s last motorbikes to the army and closed shop forever. 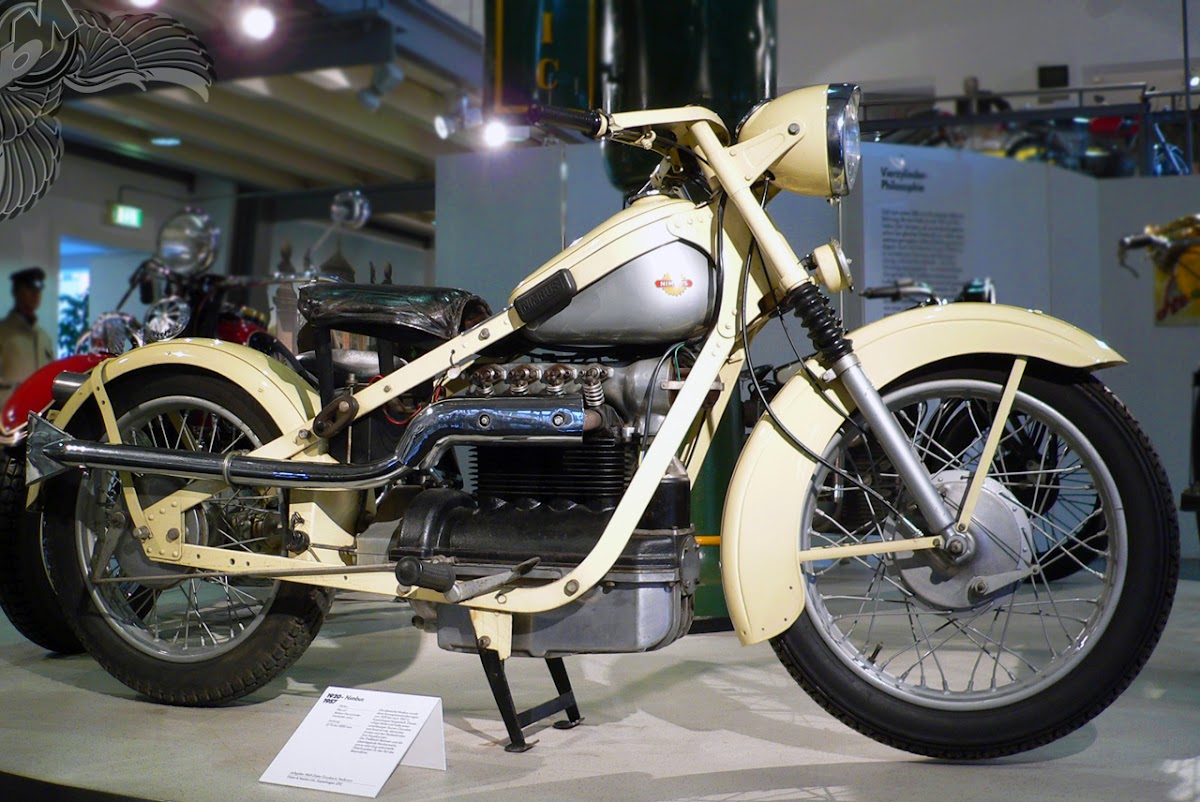 leading to the company’s demise were four major developments:

first, customs barriers introduced after the war which protected the expensive-to-produce nimbus against foreign brands fell so one no longer needed import permission for buying vehicles. second, the model c design was “hopelessly outdated” by that time and would probably have died a natural death years earlier had it not been for the import customs tax. third, anders fisker was now seriously ill with sclerosis and retired. since it was the enthusiasm of his father and him which had kept the motorcycles in production in the first place, there wasn’t support within the factory to continue spending money on what was their least profitable product. vacuum cleaners and the tool production had kept shareholders happy for many years. lastly, inexpensive cars such as the beetle, the mini, and the nsu prinz had become widely available, dropping motorcycle sales.

today it’s estimated between 4,000 and 8,000 bumblebees exist, most of them in denmark, germany and the united states. it’s fair to say that only a handful of stovepipe bikes are still around, mostly in museums and private collections.

but every once in a while, someone takes theirs for a ride… 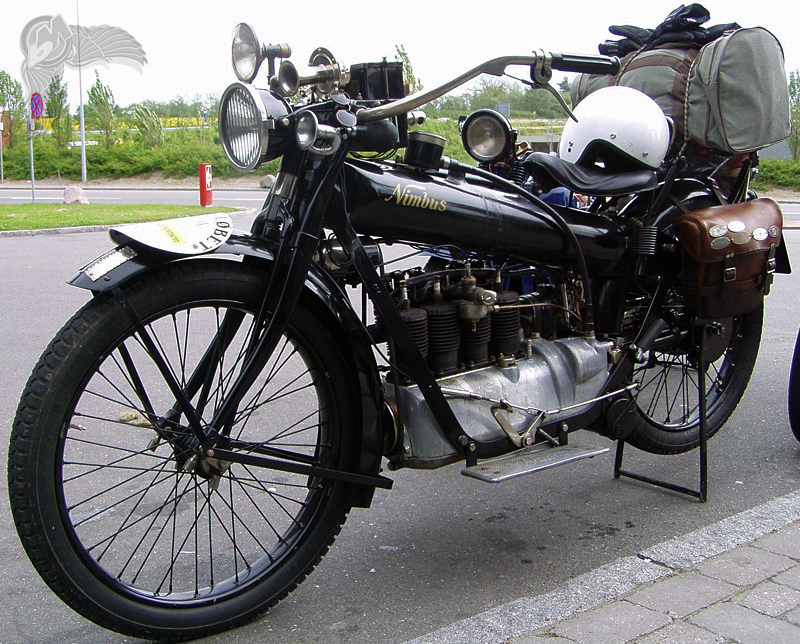 our friend fuzzygalore hipped me to something she had no idea was like a snake in the grass, it was so close it could have bit me.

she wondered if i knew about that dudes were touring the world on old bumblebees. **** no i didn’t know, but she wrote it was called “the dumb way round” and i realized some dude in a bar in austin gave me the sticker and told me to check it out probably nine months ago. i just stuck it on my ‘puter and forgot about it. 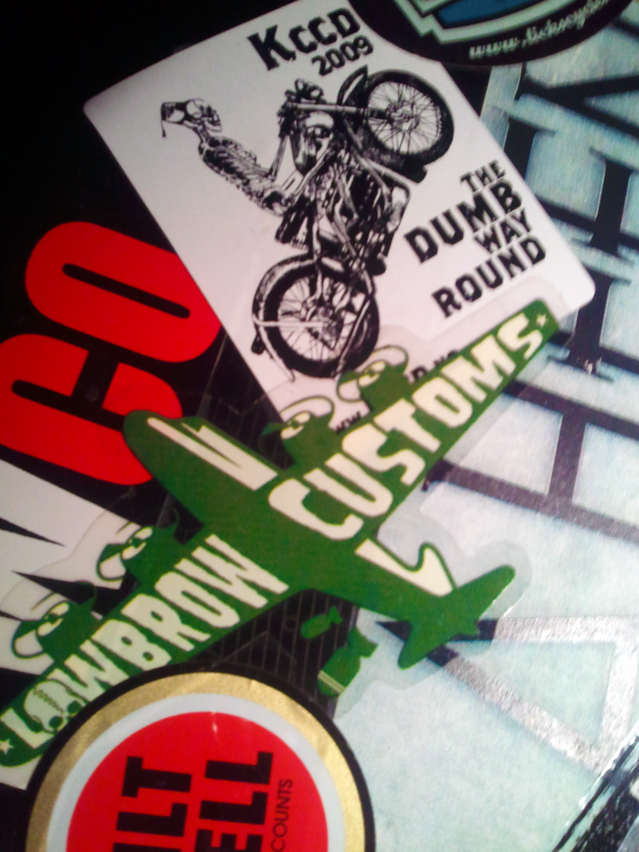 it may not be obvious to you with my sloppy camera phone photography, but the bike the skeleton is riding cannot be mistaken for many things other than a nimbus bumblebee 750 inline four. and those many things are because you’ve got to sober up.

seems this trip is taking longer than they thought….

check out the dumb way round on their blog to see they drink beer, pet cheetahs and get stitches because vikings don’t use band-aids any more and suck it up. disappointing. and it was only three stitches. i could have gotten five last week when drew brees was intercepted in atlanta as my flailing arms caught the lock on a door and tore my knuckle off.

oh, and plastic surgery, too.

thank *** i had some duct tape, scissors, and paper towels.

kick ***, mofos. i agree that compared to you, mcgregor and boorman are wussies. just quit seeing doctors unless you stitch yourself. then that’s cool. 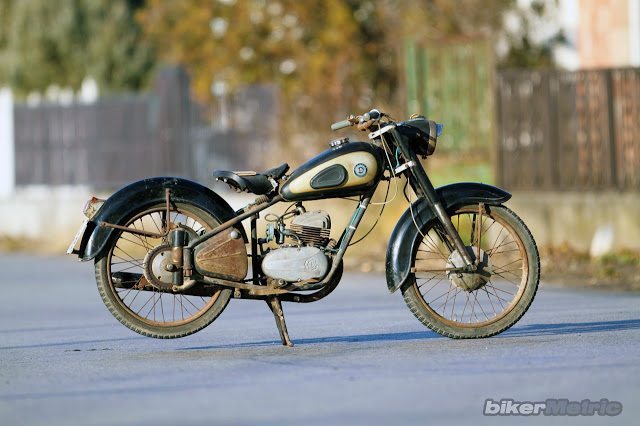