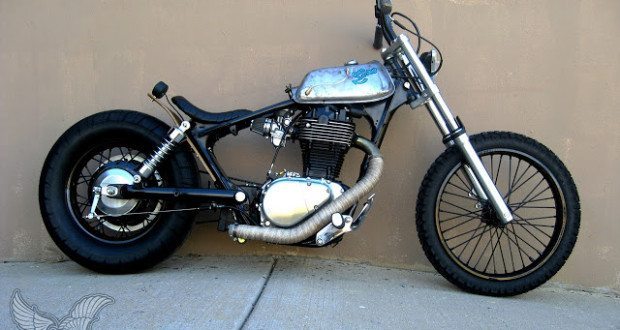 received a text today from zack over at machine-13 in phx. zack is a talented tattoo artist and when he isn’t ripping into people’s flesh, he’s ripping apart little motorbikes and bobbing the living sh*t out of them. his text stated that there was something on his blog i might be interested in. i checked it out and he was right. i asked him to email some info. 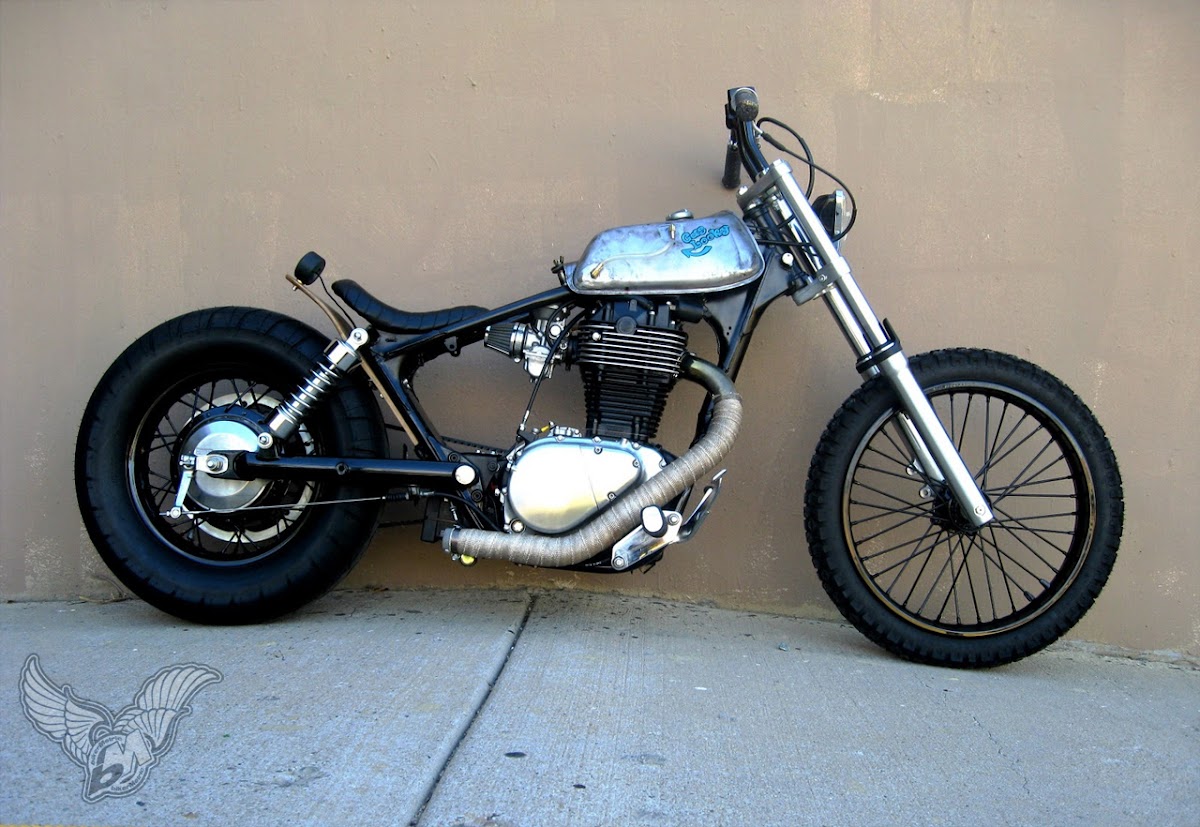 according to mister zack, the bike started life as a 2007 suzuki s40, something that “is a pretty ugly bike.” it’s just a 655cc thumper dressed as a beginner’s cruiser. the dudes at ryca are making a good living using the same motors as the base for their socal cafe racers, the cs-1.

after zack’s bike was stripped down he found himself “up against horrible frame geometry.” the biggest part of the build for him was to find a gas tank that would fit the extreamly small down tube and still look nice and sleek. he found what he was looking for on a 1970’s honda mini bike in a junk yard. as zack tells it, “it was the shape and size i was looking for.” 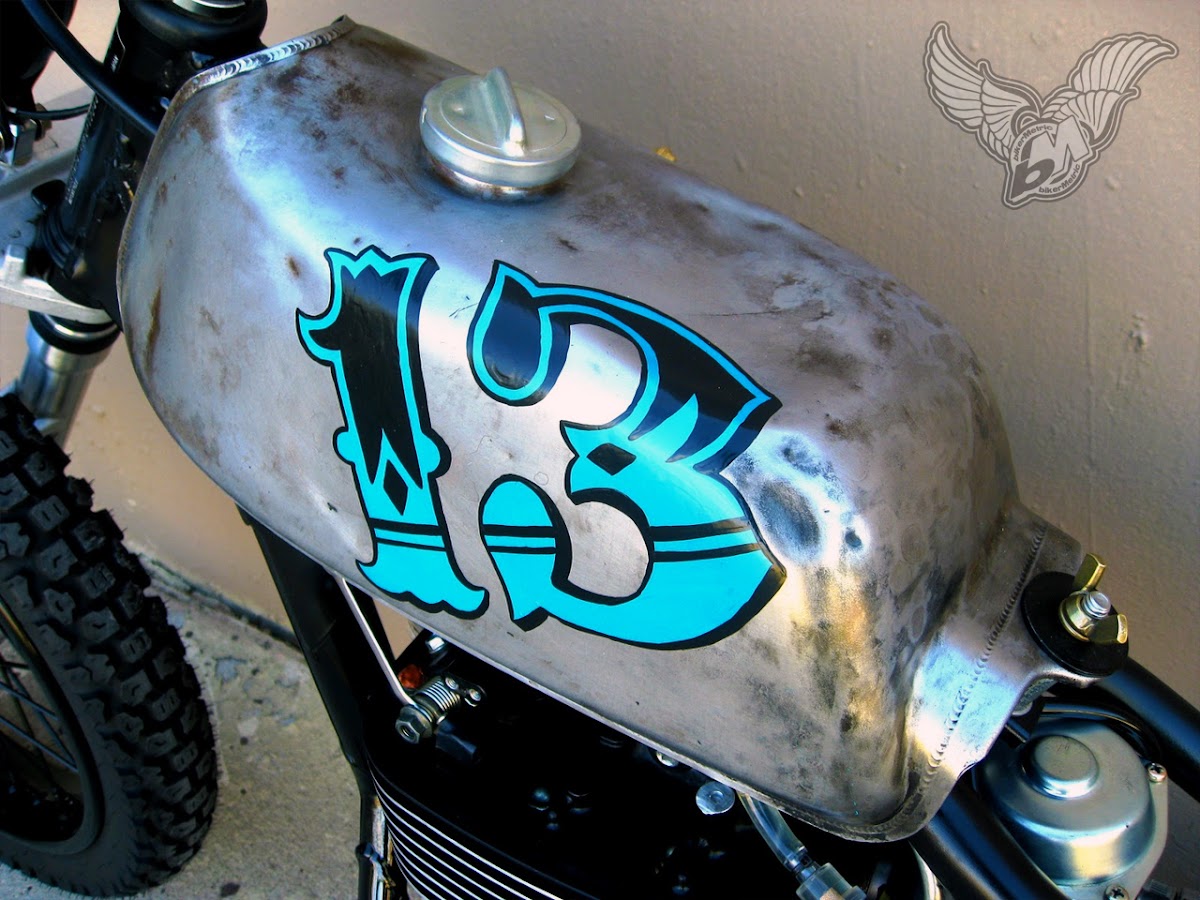 as far as other parts of the build he decided to bring back the old skateboard rear fender section he’d built in the past because “it seemed to fit the frame design perfectly.” like all his other bikes it features a skatewheel tail light.

it seems that for him, there was trouble making a new wiring harness and finding a place to hide all the electronics and battery. to remedy his problem he created a box under the bike to house most everything as his goal was to make it an extremely minimal machine. 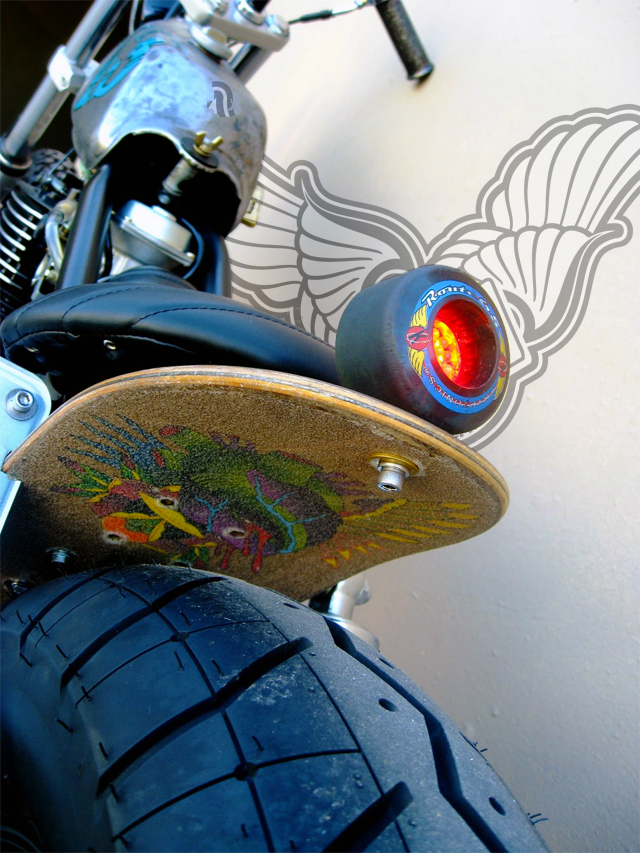 zack discovered another issue with these little one-lungers: fuel delivery. seems the s40 is “pretty finicky” and he spent plenty of time jetting and tuning the little beast so there were no flat spots in the power curve. i bet he had a twix or two during this part. now that he’s finished the bike he’s found it’s “awesome to ride, with gobs of tourque.”

it’s a featherweight like many of his other builds, which are often honda rebels. a sight gauge was a must on this bike as the tank has only a gallon capacity. this is where the bike’s name, “looky looky,” derives it’s origin. 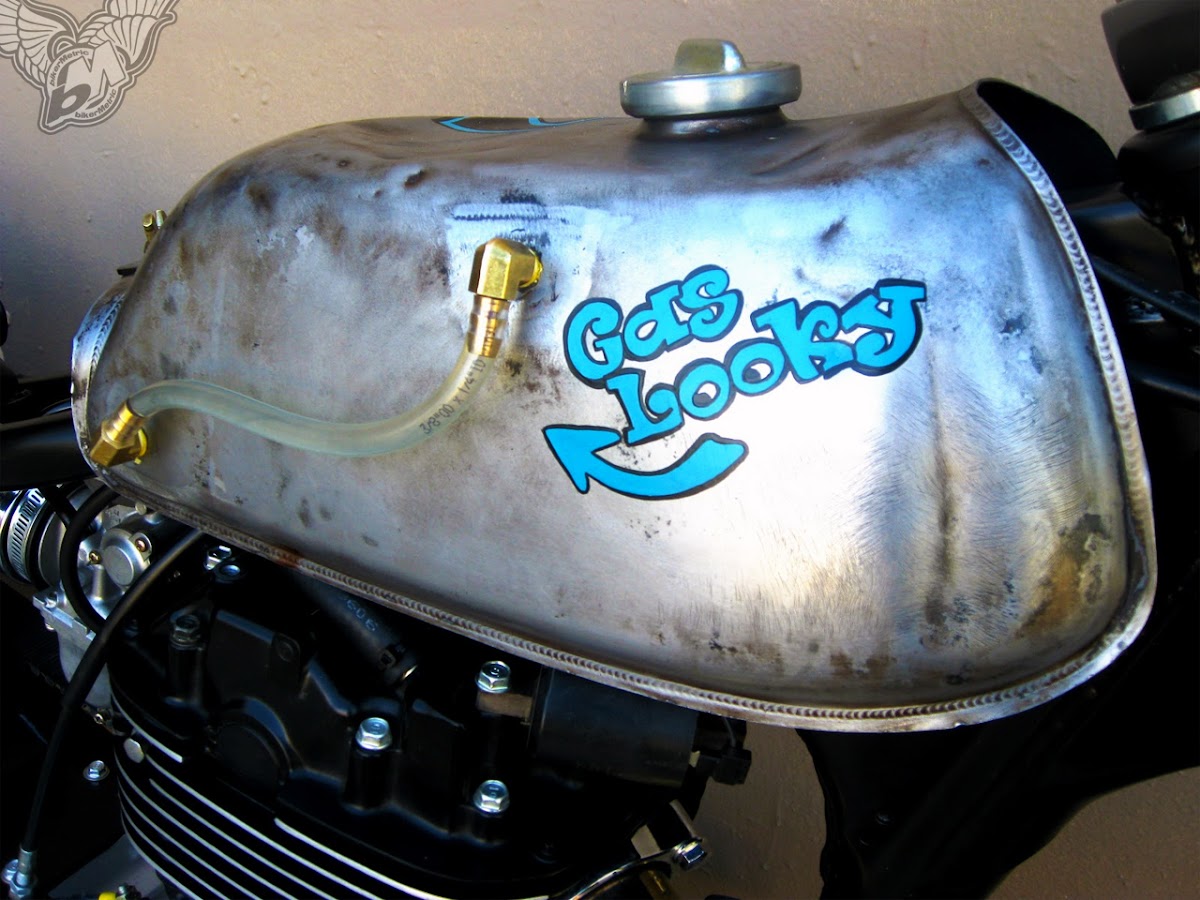 zack builds these little brat bobbers and sells them for five grand. with the innovative design ideas derived from the skate culture, his hand-painted elements, and the clean and tough style he creates, i’d call that a bargain.

did i mention he’s an artist? 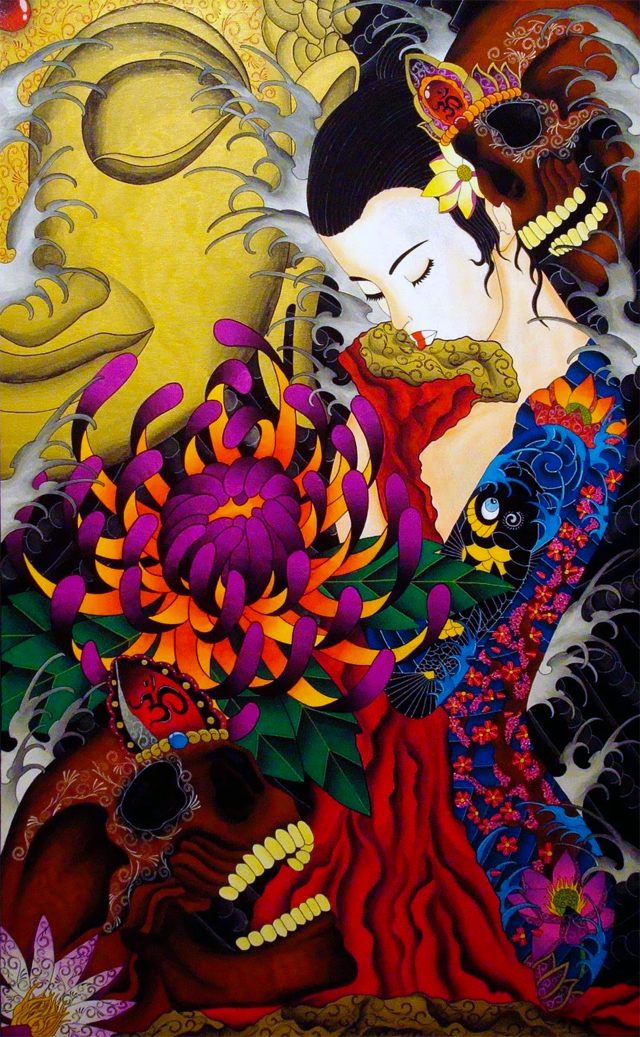 thanks for the heads up, man. here’s wishing you continued success. 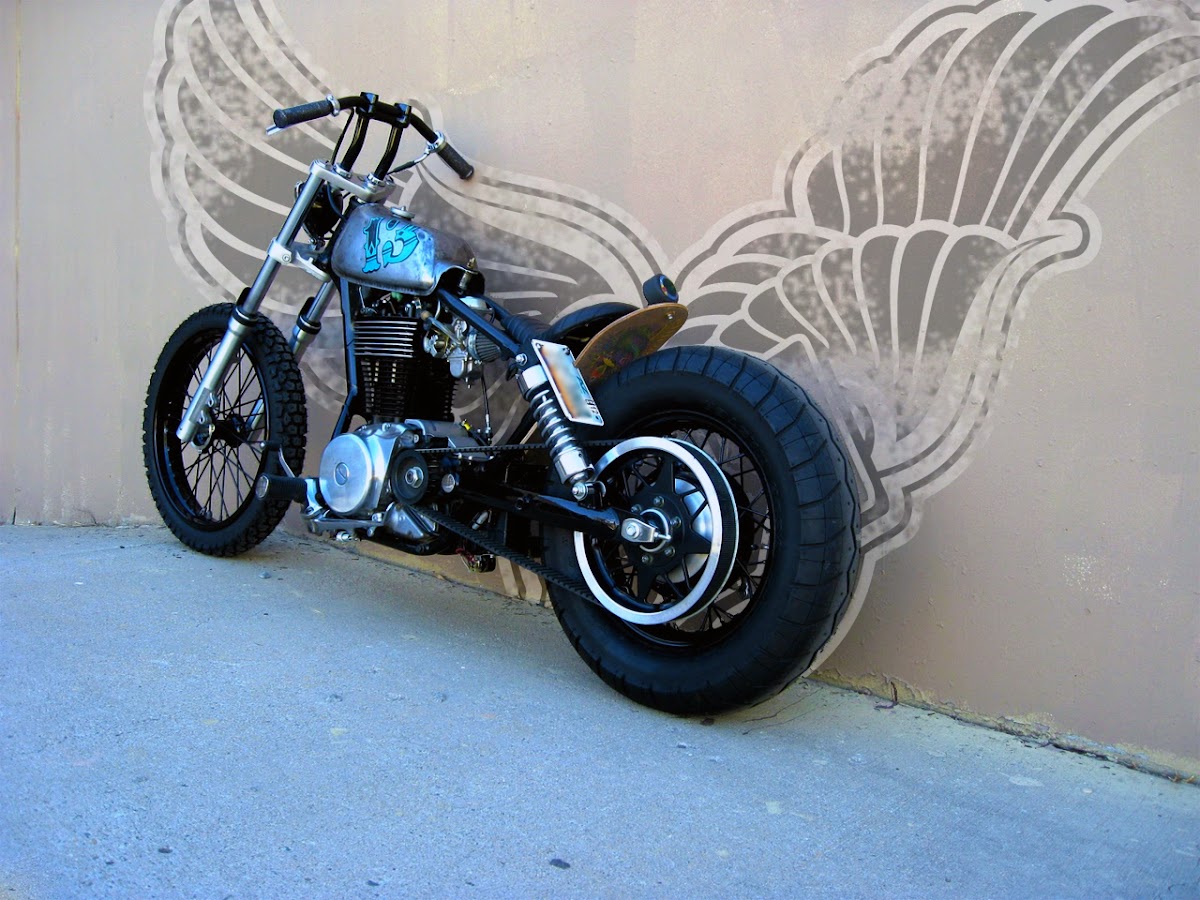