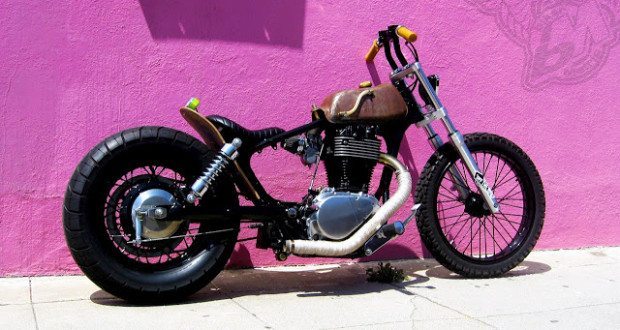 for sale. yes. you can own this s40/savage/boulevard/whatever they call it now brat bike for only $4,000. it’s worth every penny for a one-off custom that doesn’t look like every other brat on the streets, or any other suzuki thumper for that matter. race it against all those ryca cafe racer douchebags with the same engine and see:

1. who looks most cool and original.
2. who paid more to look like everything else.
3. when they catch up to you, tell them “your bike was cool two years ago but now it’s a manufactured fad.”
4. read the intervew with casey from ryca anyway. it’s one of the best and ought to provide you with a few chuckles and a head-scratcher if you’re unfamiliar with quantum physics. 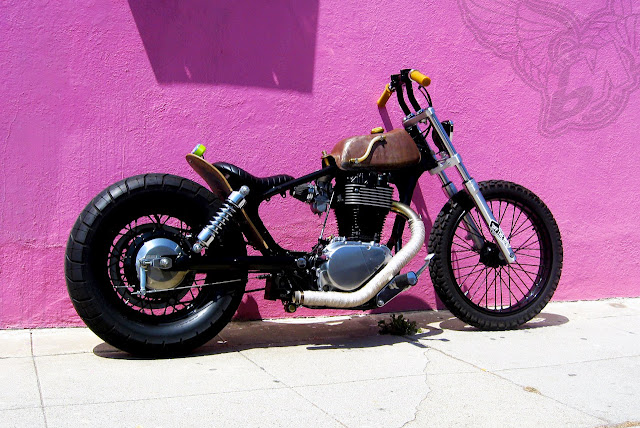 bling, mofos. yes, i was there two years ago before they were on tv and all that. don’t know how long i can keep it up because this is not only getting boring because few are doing anything i haven’t seen a hundred times by now. i am also weary of well-known bloggers following me around and posting s*** i did a week earlier without giving bikerMetric any credit for the original machines and builders i work too hard for too little to uncover.

if that does not matter to you, go back to whatever blog you came from, pansies, to see the same s**t-different day “custom motorcycles” before i tell you how you are led to slaughter with your next vote, as if there is a difference between a corrupt democrat and a corrupt republican.

did i say “douchebag” and “pansy” yet? okay okay. let us settle on “sheeple.”

to make a long story short: bM profiled this bike nine months ago but s**t happened, things change, obama isn’t what you thought, romney won’t be either, but jesus loves you all the way and misery is the path to understanding ***. hm. *** seems like kind of a party pooper although i understand jesus will bring the wine. i don’t understand…

anyway, zack took the tank off and did a classic “oil rub metal treatment.” 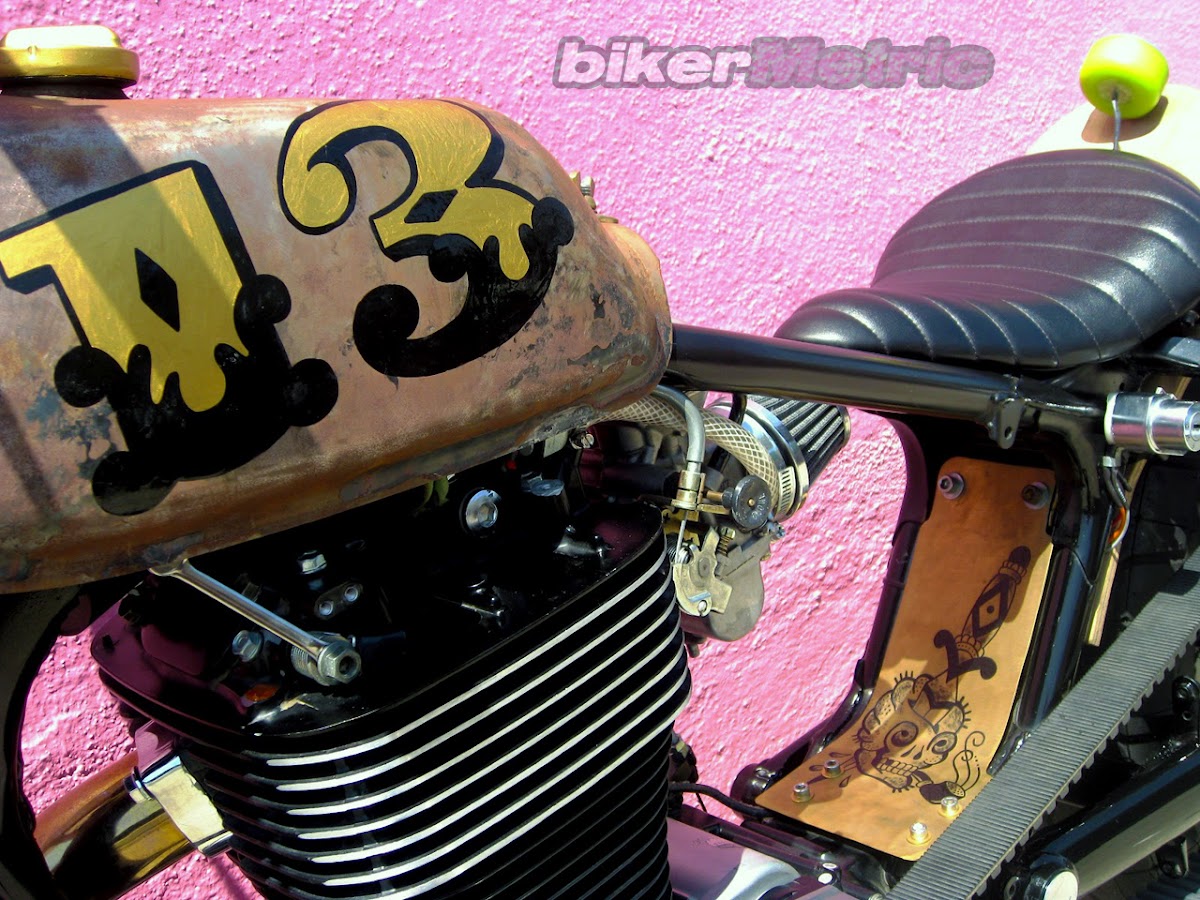 venice beach does the rust-stuff-up trick quite well it seems and once the tank is rusted and you think it’s all f***ed up, take a scotch bright pad and some old dirty oil and rub it clean. at that point you are left with a nicely dirty and extremely weathered look.

following that treatment, zack broke out my favorite colors; black and gold, and created a “new western 13” on the tank. he wanted the bike to have natural, weathered-looking colors and it looks like he accomplished that feat very well.

he scored some kung fu grips from biltwell and created a new brass plate to cover up the electronics. then zack burnished the finish and if you look closely, you can see a classic piece of tattoo flash from the early 1960’s. 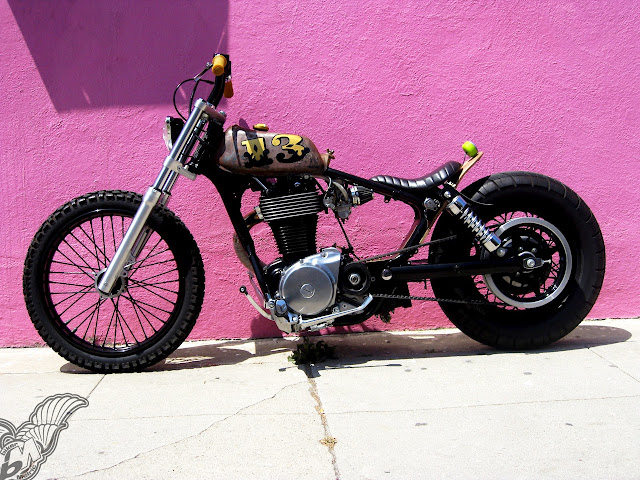 other changes include narrowing the bars, making the bright green skate wheel brake light which zack ran on his lathe so he could “put all the l.e.d. guts in it.” he also added a few brass wing nuts here and there.

one drastic change from the origingal looky looky bike was lowering the front end three inches. zack did it to give his bike “a more compact appearance” but he admits that “it was a pain in the *** and required fabricating a special tool.” even so, it seems the ordeal was worth it in the end.

zack has left the metro phx area and is in now living and working in venice beach, lost with angels, creating sweet bikes and tattooing like jesus escapes from tombs.

you can buy this bike for only 4k or get a killer tattoo by emailing zack, who can be found working in the shop founded by suicidal tendenencies lead singer mike muir. all you have to do is figure out what loveandinkart at yahoo dot com means and tell him bikerf***ing Metric sent you. remember to write “f***ing.” otherwise, you lose. 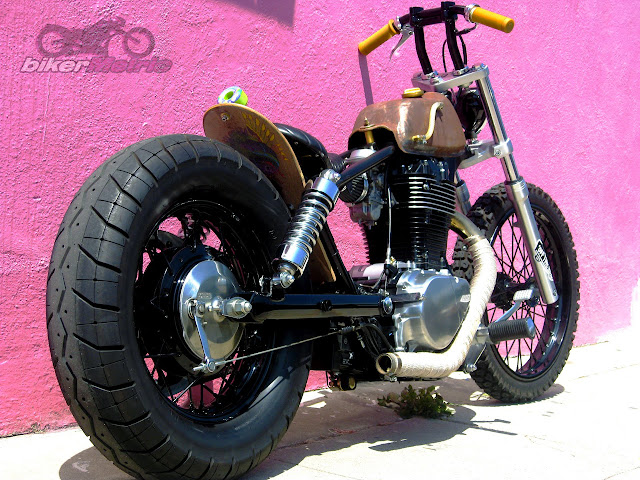 Previous: lest we forget, bp sucks and oil is still leaking into the gulf coast
Next: this is what i want to be