Monday I posted a teaser about it with an ugly before shot and a nice sleek after shot that only revealed part of the bike. Tuesday I posted the same teaser pic on bikerMetric‘s Facebook and asked if anyone would like to see more. It got 22 Likes in 2 hours. I guess that’s a yes.

It’s now Wednesday. Time to give you what you’ve all been waiting for.

bM: How did you come to own a 1974 BMW R90/6?
Erik: The motorcycle was owned by a now 82 year old German immigrant who moved to Alaska in the 1940’s. The gentleman toured the state on this motorcycle before giving it to his son, whom I bought it from. 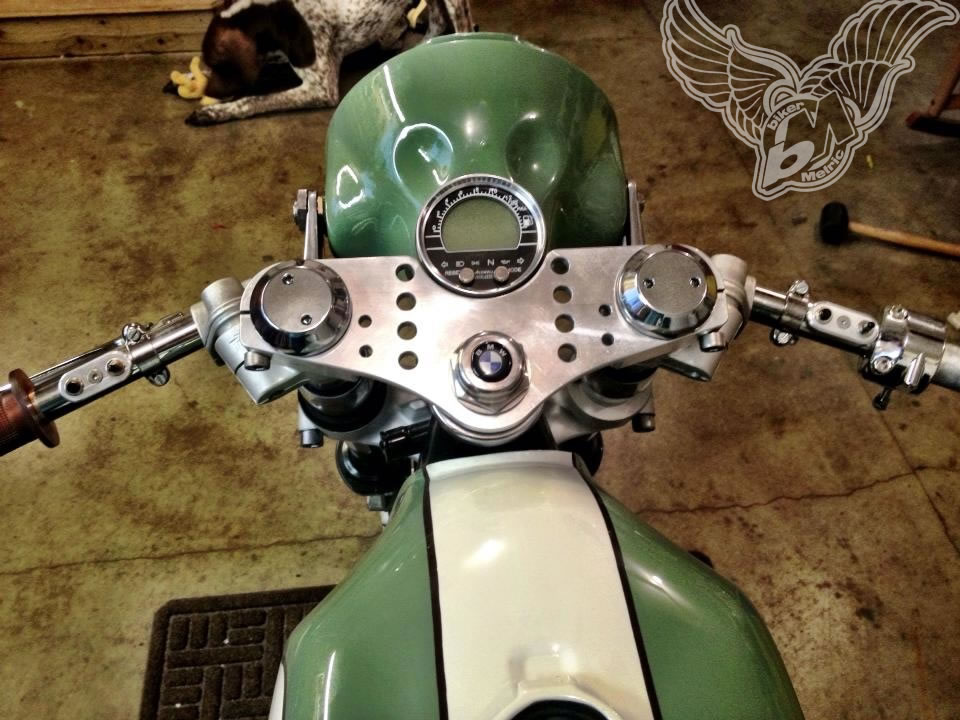 The great part about the seller is that he’s the retired owner of the BMW dealership in the town 10 miles from my house. When I arrived to pick up the bike I had the opportunity to walk through his 3 connex containers full of BMW motorbikes & stuff. He has several complete pre-1970s motorbikes and an authentic German sidecar rig. He despises the color I chose and what I’m doing to “perfectly good German engineering.”  We laugh about it and I tell him, “Jesus, ill trade some good engineering for a little more style!”  He and his son have been a great source if knowledge.” 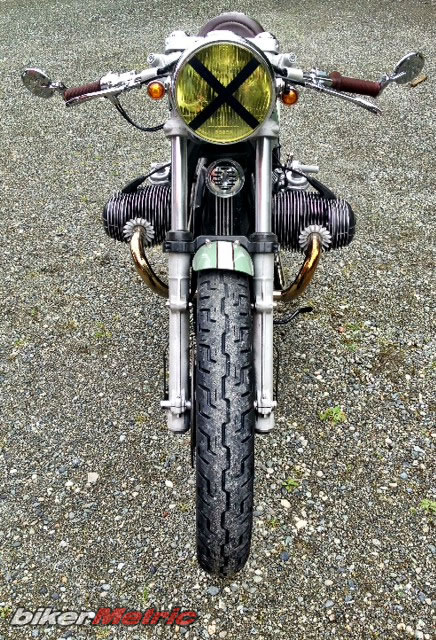 bM: What was the idea behind the bike?
Erik: “I wanted the theme to be “New Vintage” where every nut, bolt and seal was replaced along the way but it still retained its vintage look. Custom tail & LED tail light give it a fresh look but then I swept the paint lines back to give it an old school race feel.”

I think he nailed it.

bM: How much did you pay for the bike? What happened with all of the extra weight it lost?
Erik: “I thought I could sell the unwanted luggage, fairing, fenders, lights, etc. to offset the $2,300 purchase price.  ****, was I wrong. I couldn’t PAY someone to get it out of my garage. The fairing became part of the kids’ tree fort at the cabin.  I didn’t plan on tearing into the bike until fall but, after 17 beers with a buddy in my garage, history was made.”

bM: Ain’t that how it always starts? Then what happened?
Erik: “We disassembled the bike during one all-night session with the help of some rap music. I parked it the beginning of June and just put it on the road last week. Approximately 13 weeks.”

bM: Tell us about airheads.
Erik: “I’ve been in love with airheads since I first rode a friend’s in 2002 when I was in college.  The opposed cylinders and perceived width was so different and eye-catching. When I saw a BMW cafe bike in a random magazine, I was hooked.”

bM: Hey, what a coincidence! We rode a lot of freshmen airheads in college too! None of them were from Alaska though. On the off chance Erik spilt the milk on the Tea Party, bikerMetric just wants to say way to go buddy! We love those Alaskan cylinders too!

Of course, there’s always the chance that these were what he meant by airheads: 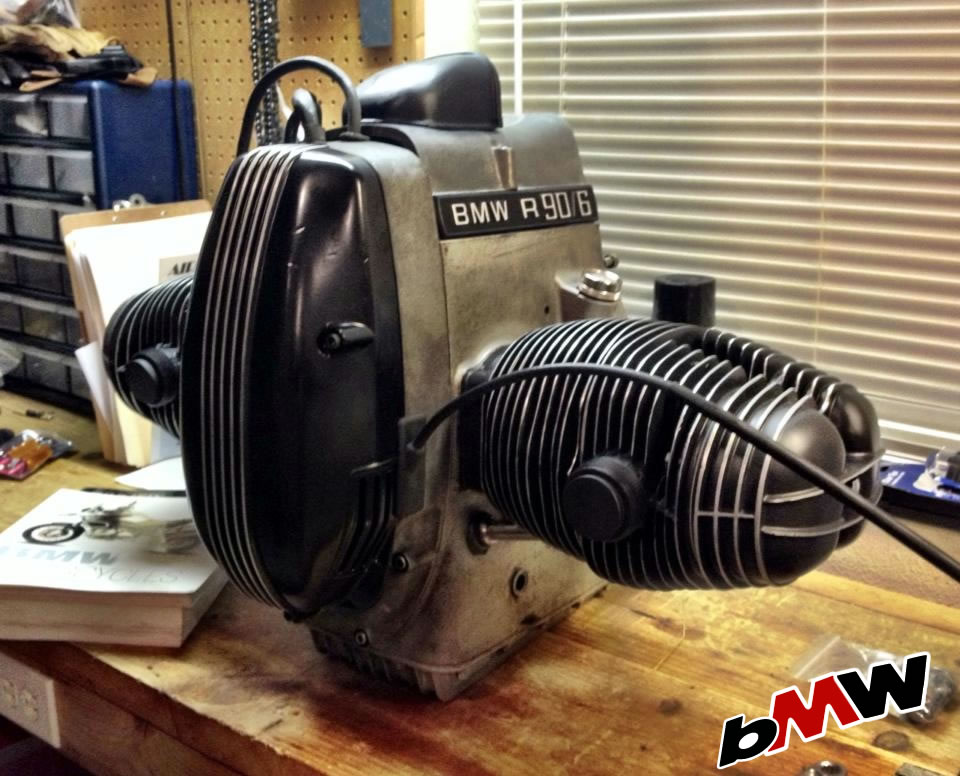 Yeah… this is probably more like what he meant. Oh well. 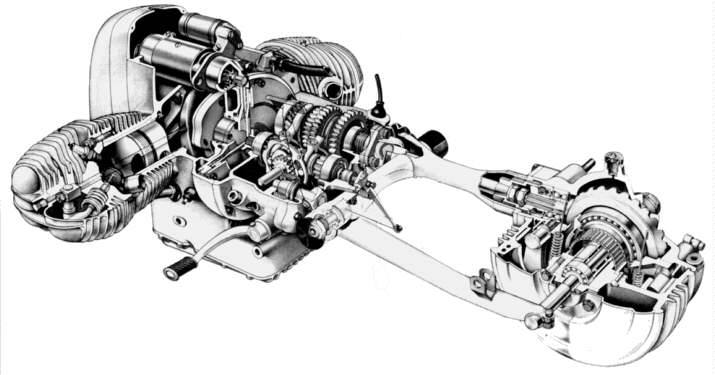 bM: Does it have a name?
Erik: “I think I’ll name the bike Catalyst. Every slightly-overweight, late 40’s man who stops to chat about the motorcycle seems to be on the verge of their own midlife crisis. Their eyes widen and they share all kinds of ideas on what they’ve always wanted to build: hotrods, motorcycles, etc. but they have too many excuses for why they haven’t yet taken action. I hope our fun chats in front of the coffee shops give them enough motivation to begin their own projects.” 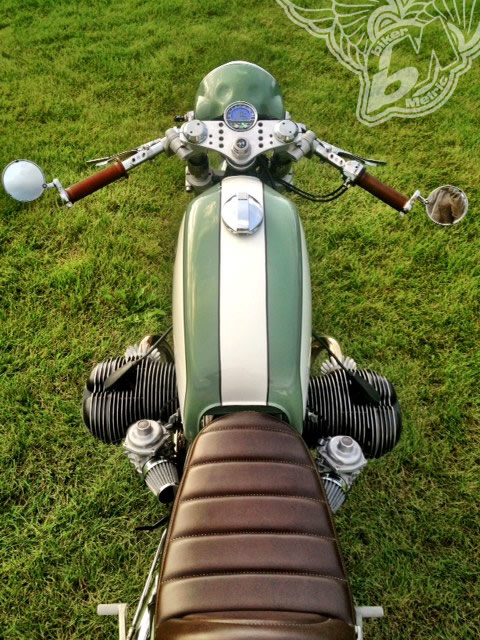 Biggest PITA was wiring a 40-year-old harness to a modern digital speedo/tach and all the functionality it offered.”

bM: Any favorite modifications on the r90/6?
Erik: “(1) the posh Japanese switches.  A major PITA to order but, luckily, I lived in Japan and spoke with the manufacturer.
(2) the flush-mount of an Acewell speedo
(3) Ceracoated Cylinder heads.  After 13 beers and a few hours of staring at the bike, I thought of what women say regarding stripes; “If you want to look taller, wear horizontal stripes.”  After coating the heads I stripped the edge of each fin to give it a layering effect.”

Erik took a 39 year old motorcycle and in 13 weeks had it looking better than new. F*** yeah!
Thanks for sharing your bavarian beauty with us.

Previous: sneak preview | bmw r90/6
Next: just a day in the life