Two years ago Erik Christensen sent in some pics of his build, a 1974 BMW R90/6 he built up in Alaska. Erik uses his completed motorcycle builds as props for family photo shoots. It’s a great way of his whole family involved. The Norton itself has 9,000 original miles and has spent it’s last 20 years in storage.

bikerMetric: Alright, let’s get the new readers acquainted with you. Who are you and what do you do?

Erik: I’m Erik Christensen,  from Palmer, Alaska. I own an insurance & financial service agency by day but I play in the garage by night. 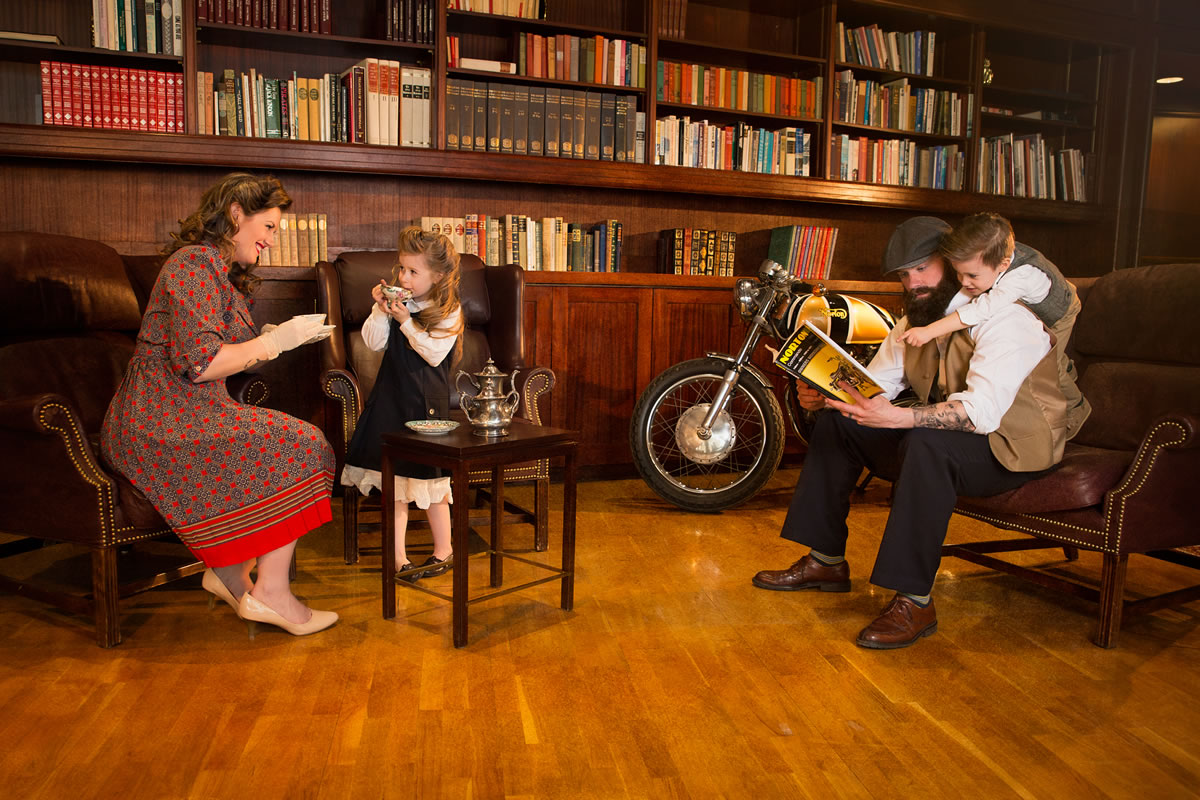 Erik: What makes me ****** rock is my kids. With each bike I build they’re more involved. They are only 3 & 6 but they’ll be fabricators by the time they graduate high school. Layered with an education in manufacturing or design and they’ll be unstoppable. I fully anticipate riding a bike one of my kids designs for BMW when I’m in my 60’s.

bikerMetric: We heard you’re on the big screen.

Erik: Friends of mine own a small production company and we put together a short film about the joys of legacy building. The film is in the Motorcycle Film Fest the end of this month and then we’ll release it to the public. 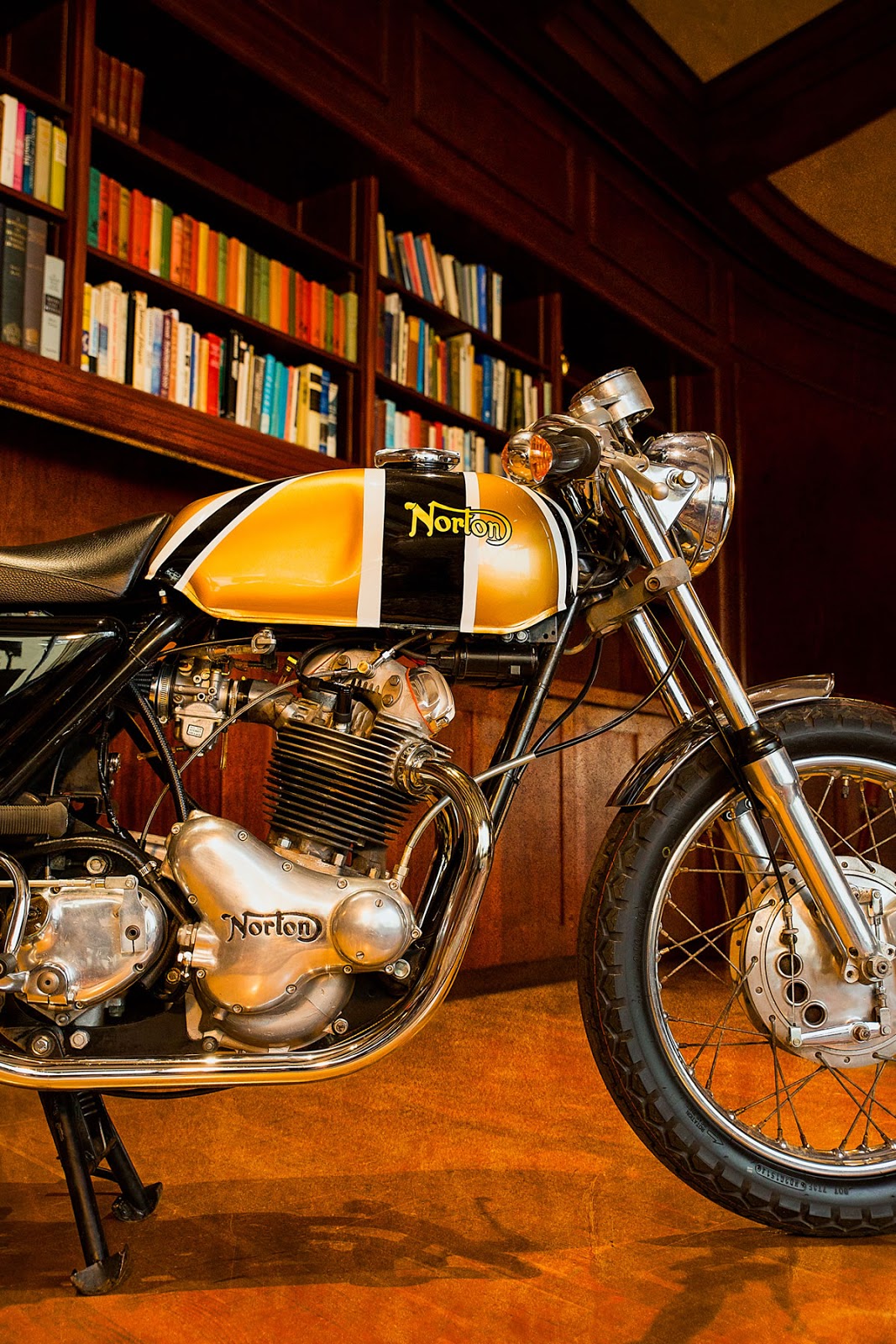 bikerMetric: Nice! Looking forward to you sending it our way. Let’s talk about this build. What inspired you and what was the look you were going for?

Erik: Truthfully, this bike wasn’t expected. I had a few other builds I wanted to get to this year but when a 71′ Norton with a beautiful vented drum front break shows up you don’t pass. As a result, the build was quick & dirty. Motor & frame are untouched and I tried to complete it before roads dried-up here in Alaska. Just as I finished the bike and started back on my 58′ BMW, a 64 Panhead Chopper surfaced…”*** **** it I love these interruptions,” I thought. Between my building, the Alaska Vintage Motorcycle Show I organize, and having coffee with old guys who don’t know what the **** Facebook is, I’ve turned into Alaska’s Motorcycle Picker.

bikerMetric: What modifications did you? 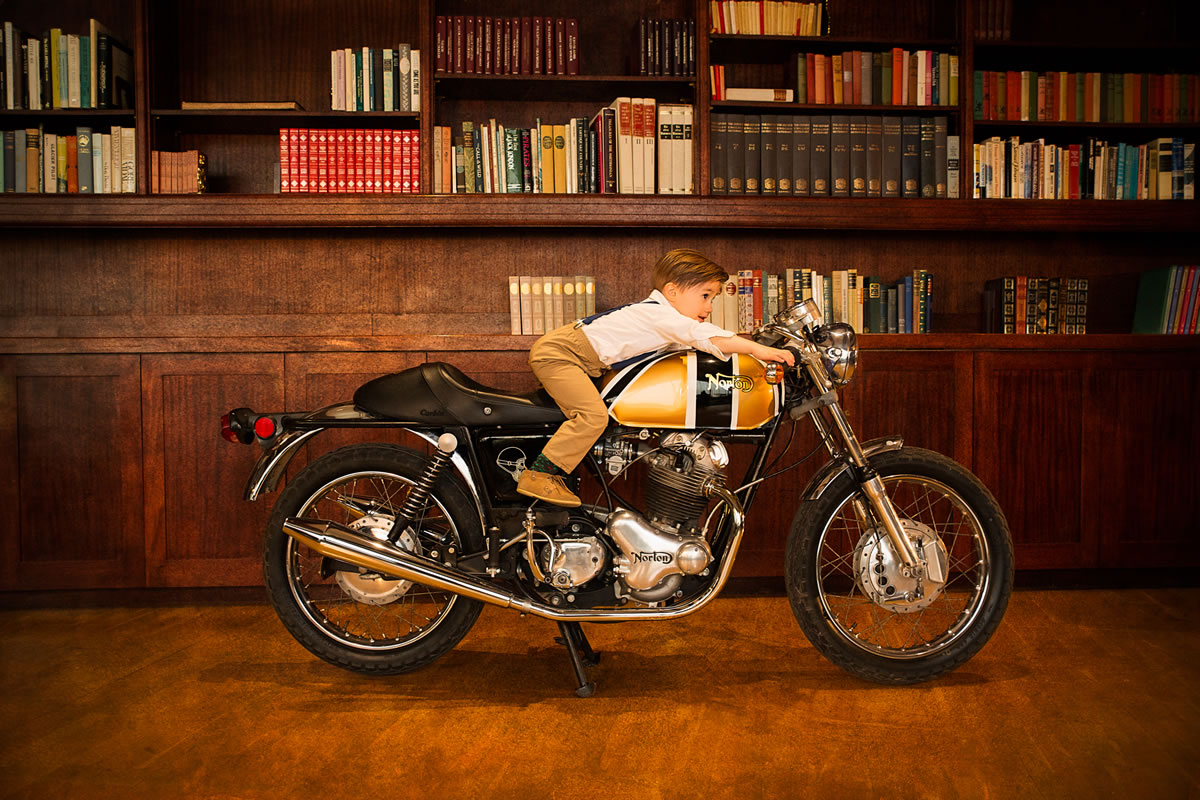 bikerMetric: What was most difficult part?

Erik: Keeping the oil from the British bike off my garage floor.

bikerMetric: Get out the kitty litter. What’s something that came out really nice in the Norton cafe racer build?

Erik: Had fun with the Union Jack draped across the tank. I Kept the colors and it’s an easy way to make the bike British without doing the Austin Powers thing. 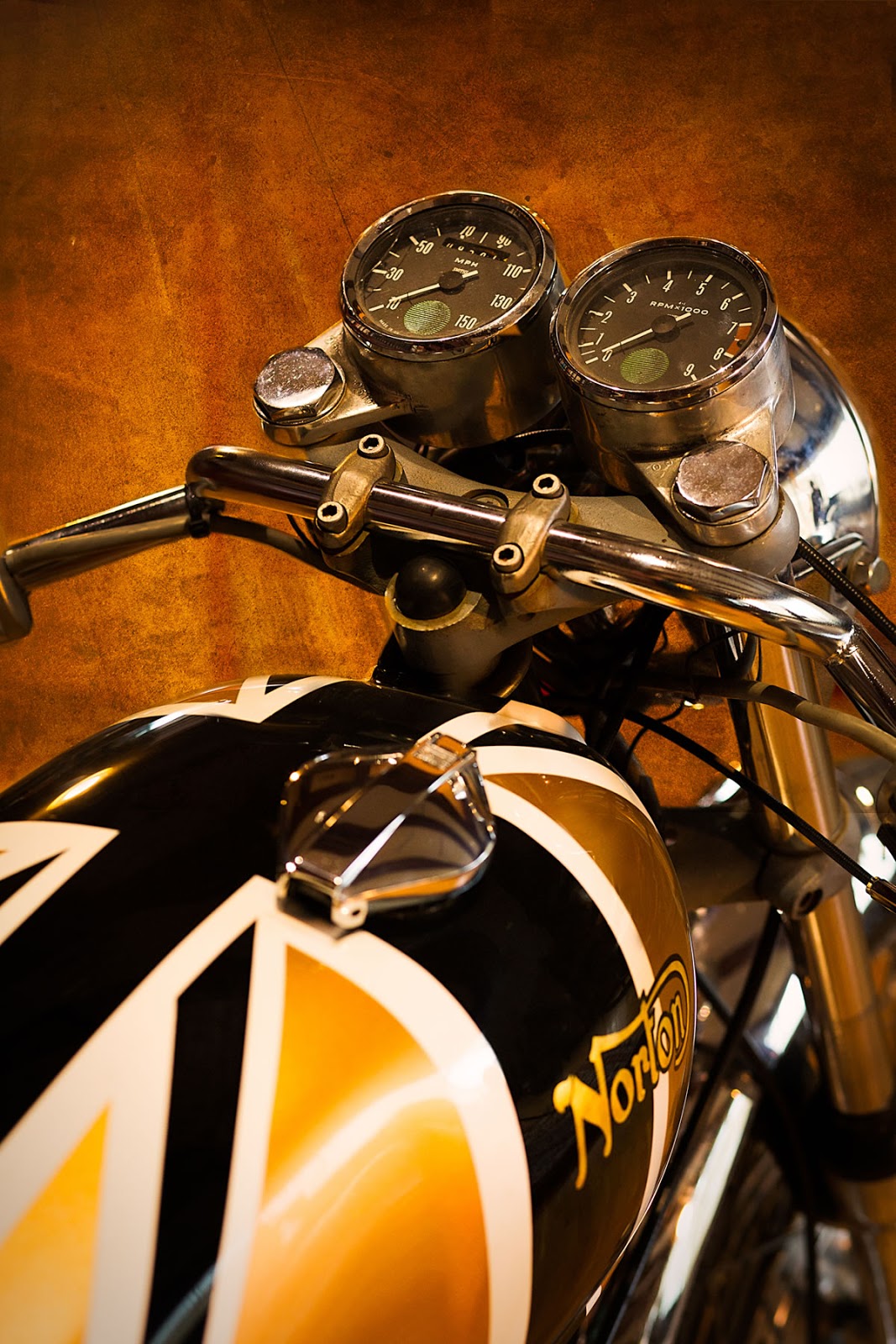 bikerMetric: Any hesitations on starting the project?

Erik: I had the bike on my trailer within 30 minutes of learning of it. I also bought a low-mileage Triumph TR6 that went to a friend of mine. When the storage unit door rolled up I knew I’d be sleeping on the couch that night…and I loved it.

bikerMetric: Tell us about the shoot.

Erik: Every bike I finish I do a professional photo shoot with it. My wife, kids and I get dressed-up in period appropriate clothing and we find a location that fits the theme. I’ll have the coolest family photos ever over next 30 years – none of that static **** standing in front of a tree, mountain or waterfall. 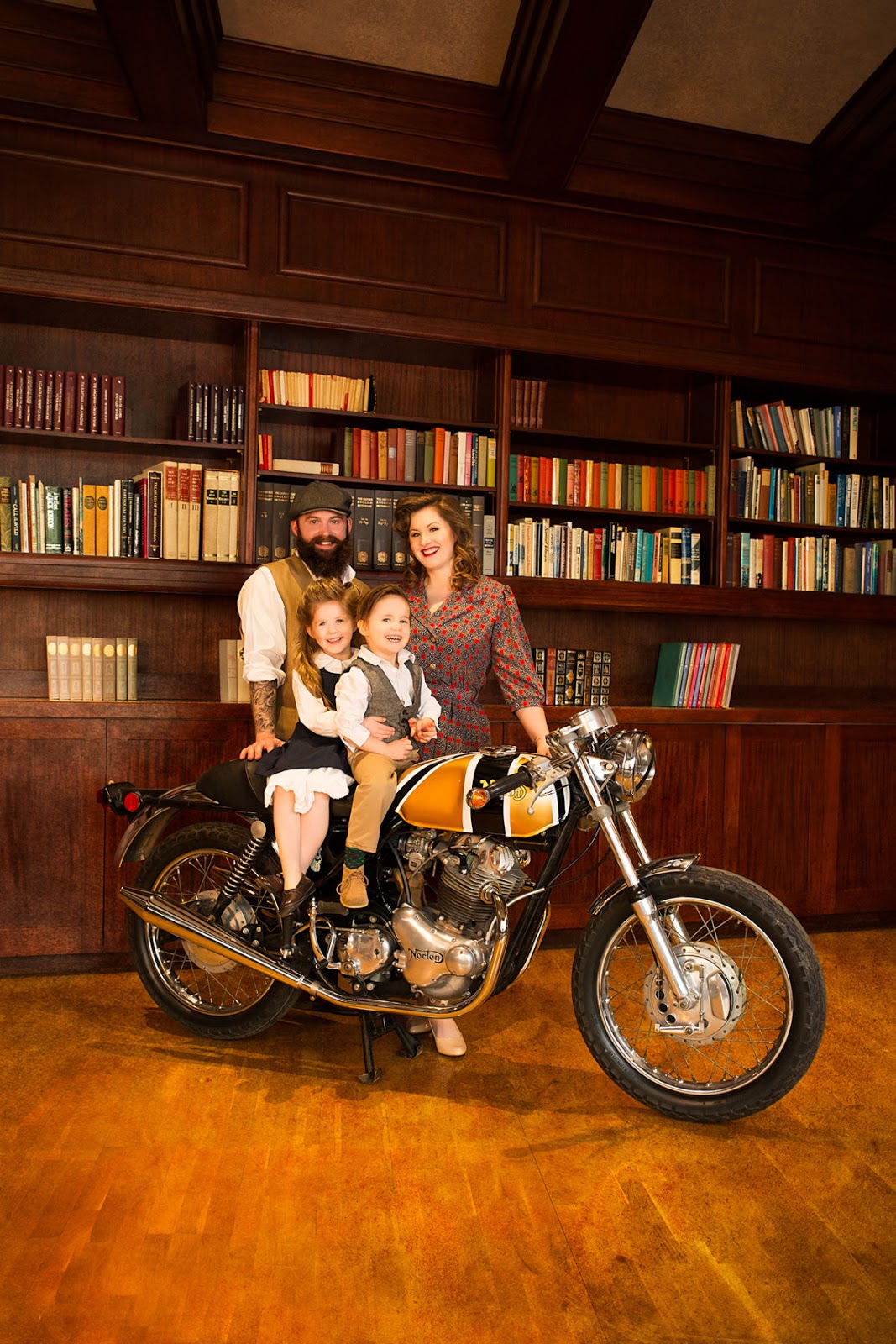 bikerMetric: Is the Norton up for sale? What’s next?

Erik: I don’t sell any bikes. I have a 64 Panhead chopper frame, springer front end and 12 boxes of parts. I’m going to make something nasty with it and I’m also building a Honda CB550 café for my wife. My long-term, highly custom project is a BMW R100/2 conversion like nothing before. It will have brass, leather and cocobolo wood accenting the bike. Look for it next year…and when I say next year it will probably be 2017 because of the beautiful interruptions.

Erik: I call my motorcycle obsession Northern Café Racers on Facebook and Instagram. We’ll probably be rebranding in the near future because I may want to restore/customize old signs, barber chairs or something else in the future. The moment I scared myself silly riding my 12-over chopper down the road, I knew I was going to work outside the “café racer” box. 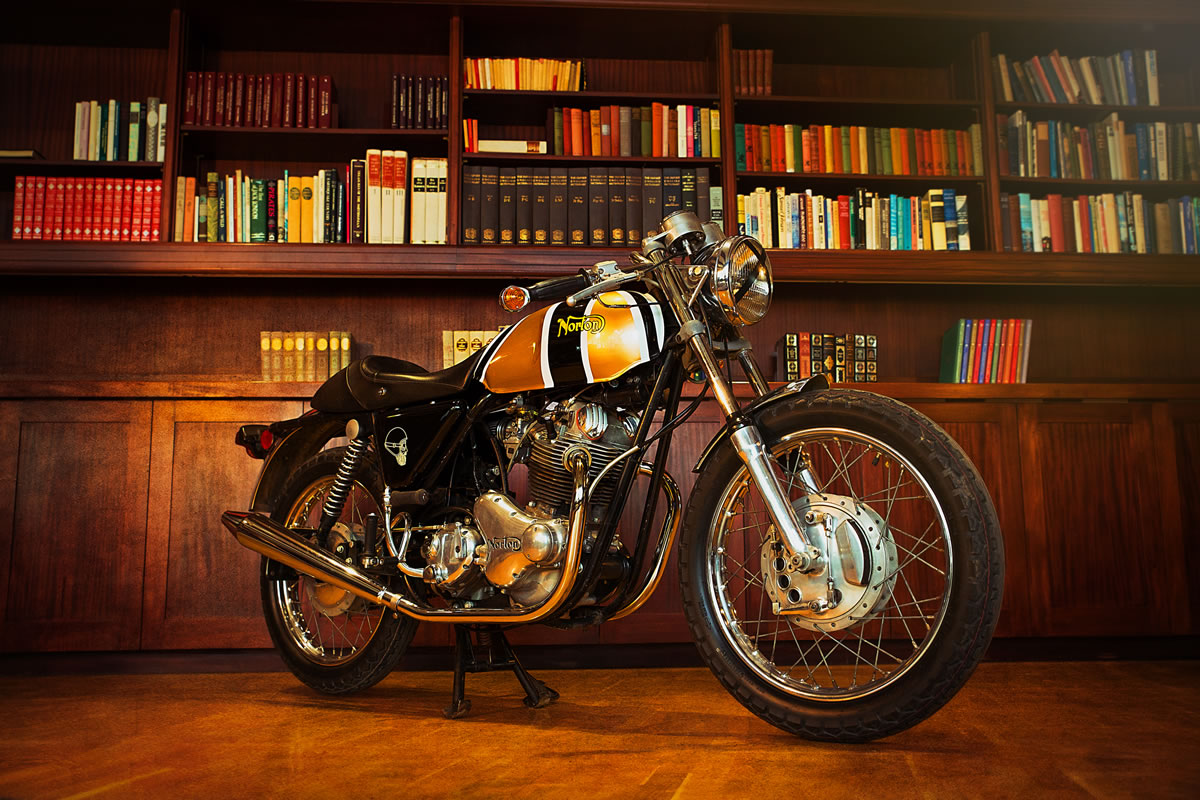 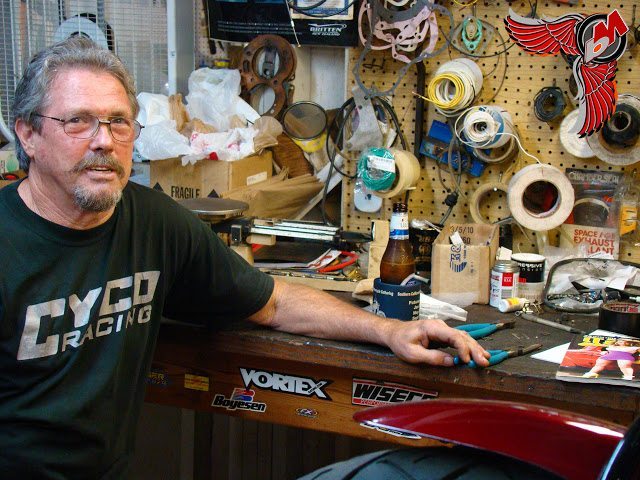 stan keyes from cyco cycle at his home garage

renowned wera and speed racer mister keyes allowed me into his personal ... 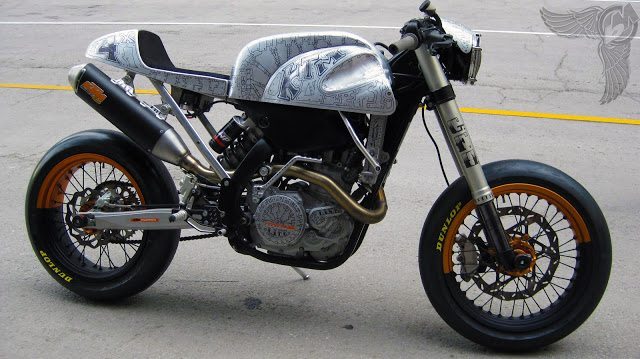 just a few bikes from around the world with a shout out ...