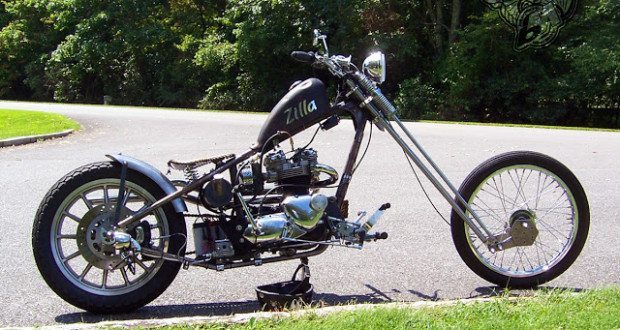 mister don snow emailed recently with some pix and info of his first attempt at a custom build, a 1973 750cc triumph tiger five speed chopper build for his eldest son, don jr. seems junior showed up in don’s driveway with several boxes of trump parts about a decade ago. the motor was about 90% complete but don had to find electrics for it. it’s got an electronic ignition, electronic charging system, new pistons and cylinder unit. 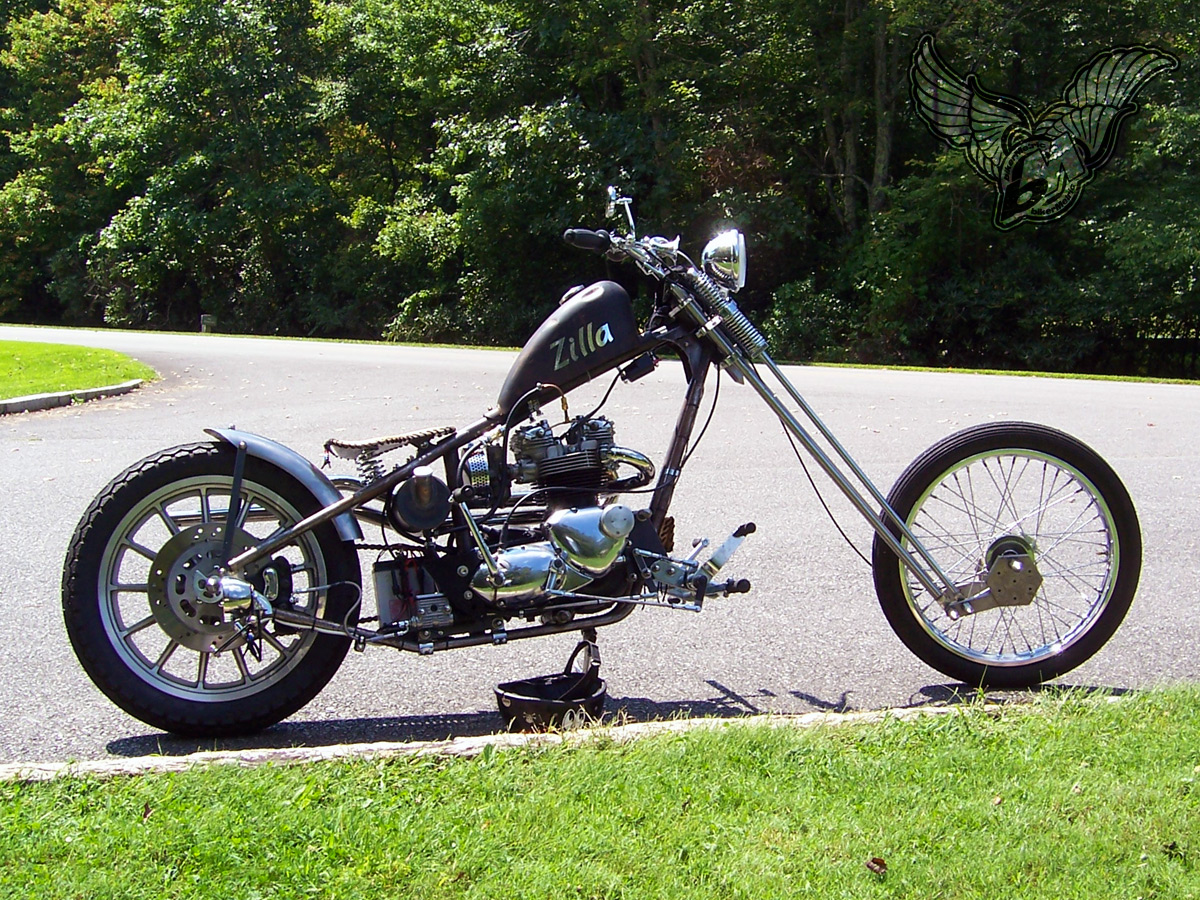 it’s got a 10 inch over springer front end, a hardtail frame from “a company in canada,” a 21 inch front wheel with a former sportster front wheel at the rear. the bike runs on avon speedmaster rubber.

don fabricated the foward controls and battery tray using stainless fasteners throughout the build and finished the bike this summer, delivering it to his son to what i suspect was a great smile. 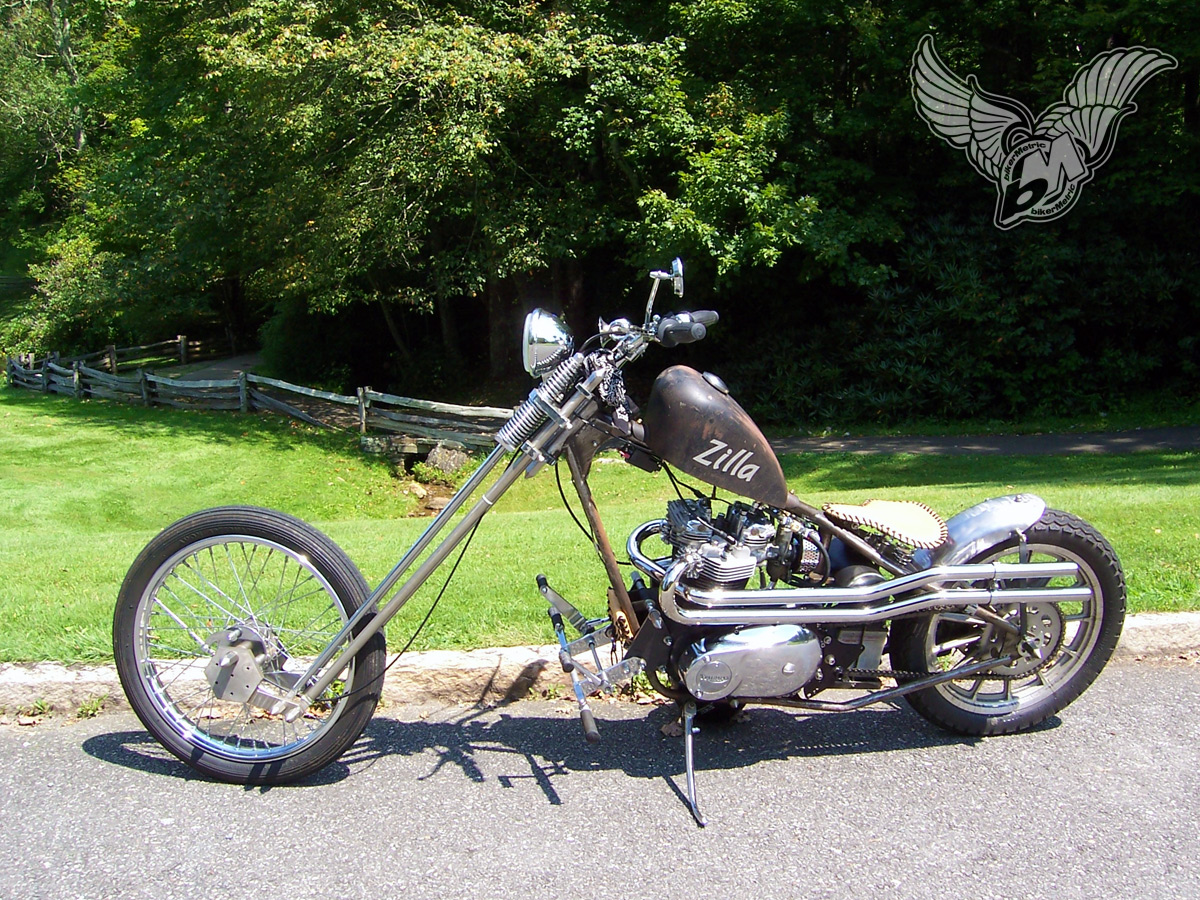 on the last day he was there, mike somehow coaxed don over to his ex-wife’s house where mike had the bike stored. he had done some work on a bike for some guy “that didn’t know which end of a screwdriver to hold.” when mike was done, the guy was so pleased with the work he offered mike this cz for nothing. neither mike nor the owner knew anything about the bike and it was thought it might be good for parts to be used on other chops and bobs.

bob’s first impression was “this will be impossible,” but it turned over and had compression. what intrigued him was the way the kicker and shifter worked. seems that one must push the shift lever in and flip it back to kickstart and then flip it forward to shift. bob decided to load it up and the adventure began. 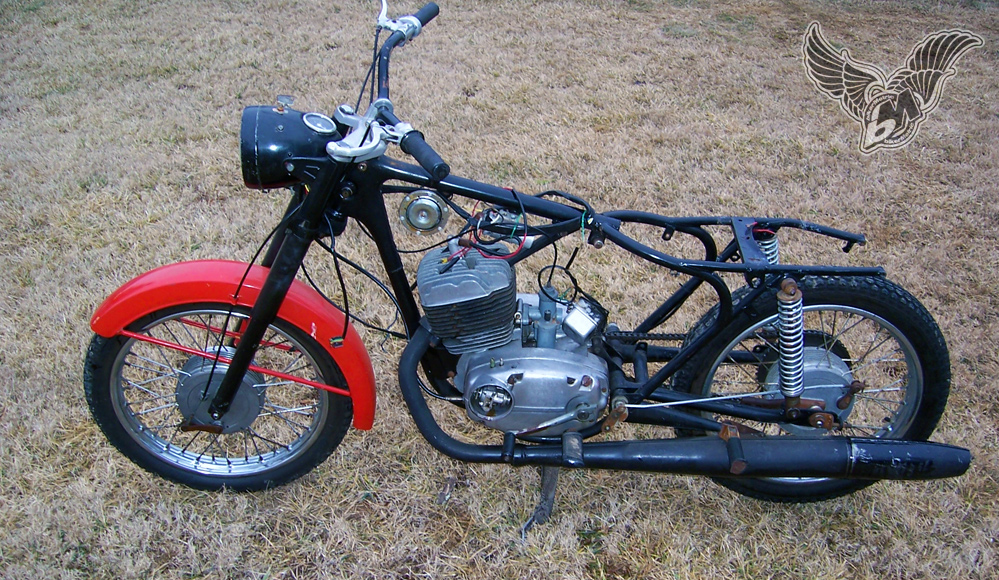 the bike was about 99% ready to ride but the right side battery cover and the throttle and oil pump actuator cable was cut. when bob got home, he tried to get her to run. he has never trusted any oil injection system on any bike, so it was immediately dispatched for a 32:1 oil and gas mix directly to the carb. a new battery was purchased to match the existing points ignition. the machine then started on the second kick after sitting for over 20 years. bob wrote that at the time, “the hair stood up on my arms.”

along the way don made the acquaintance of a gentleman nicknamed “Terence20001“. it seems that if it was not for this guy, don’s cz project would still be sitting in the garage, or even the dump. terence gave so much helpful advice, pointed don in several good directions, and even went out of his way to mail several carburetor jets and slide needles to properly tune it. with terence’s assistance, they discovered it has a rare aprilla head light housing, which turned out to be a nightmare to fit with a 12 volt lamp as this model never had a 12v lamp application. don lucked out and found a halogen 120/90w sealed beam that fit perfectly using the original clips as well as a “power dynamo” brand combination ignition/alternator system to replace the stock unit. he says it was “a bit pricey but worth every penny.” 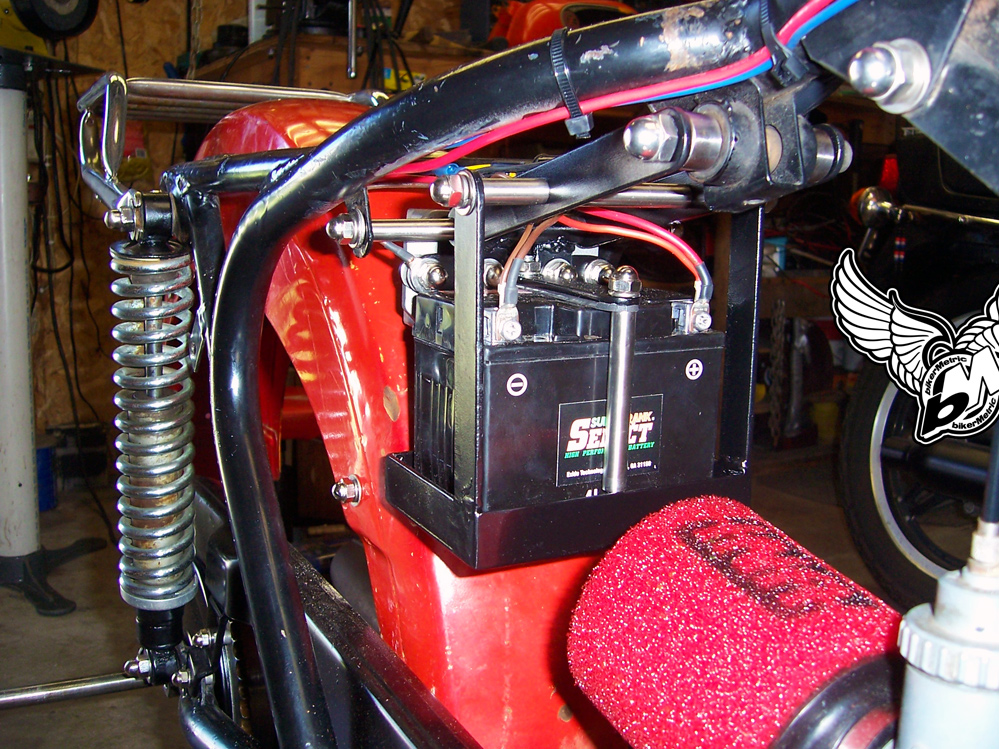 don then eliminated the stock air box, knocking off at least 15 pounds, and replacing it with a foam type “uni-filter.” as with his triumph chopper, he had to fab a battery tray, this time out of some scrap steel and an old bed frame. the old barum tires were dry rotted and were replaced with a pair of michelin gazelles. everything else on the bike is stock, including the original paint.

since delivering it to mike in august, his son has added over 2,000 miles to the orginal 1,097 that showed on the odometer when he got it. 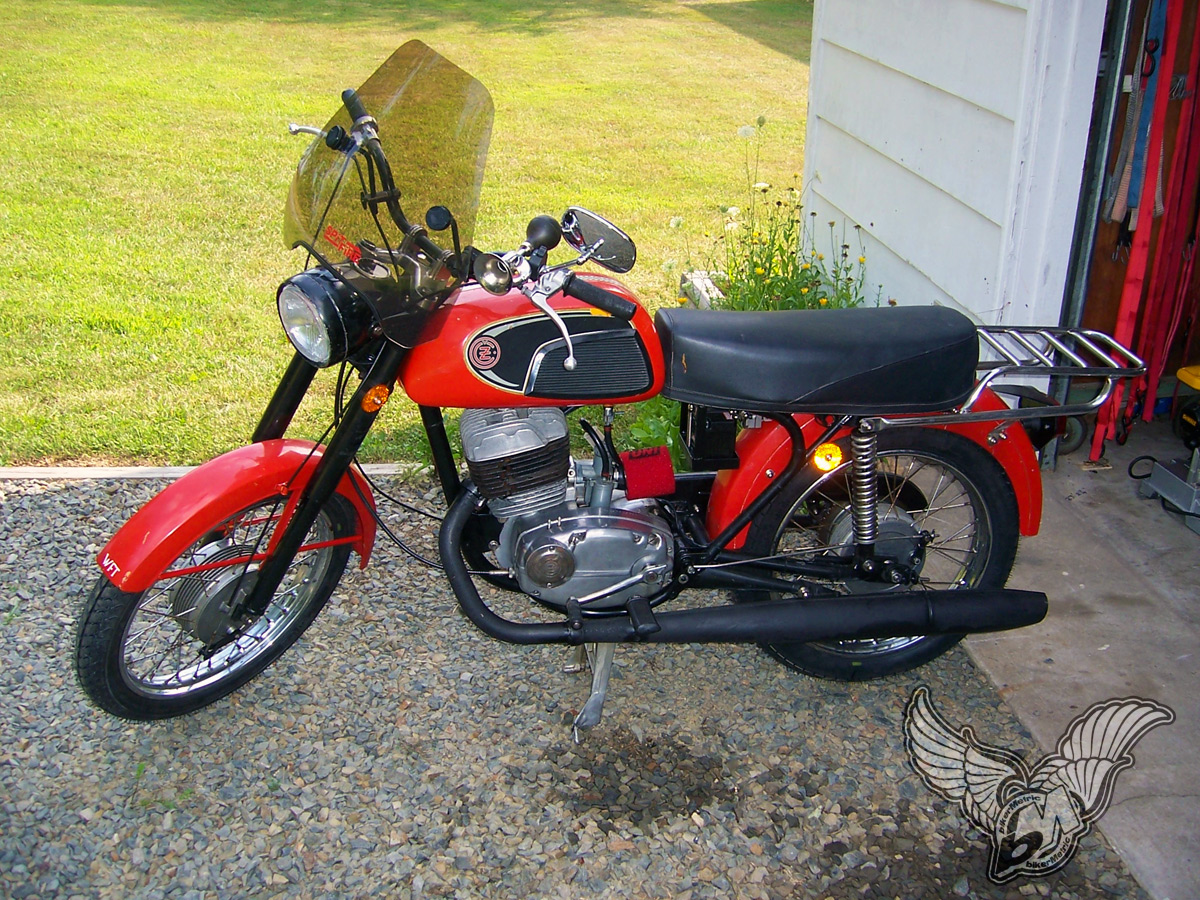 according to don, “it was probably the most fulfilling project i’ve done because of who I was doing it for.” you can check out some vids on don’s youtube channel at zip343.

finally, don wrote that he has spent many hours on bikerMetric and believes “it is the best bike site on the web.” that gets a great big… **** yeah!

thanks for the flattery, plus all the pix and build info, don. can’t wait to see the next machine you create. 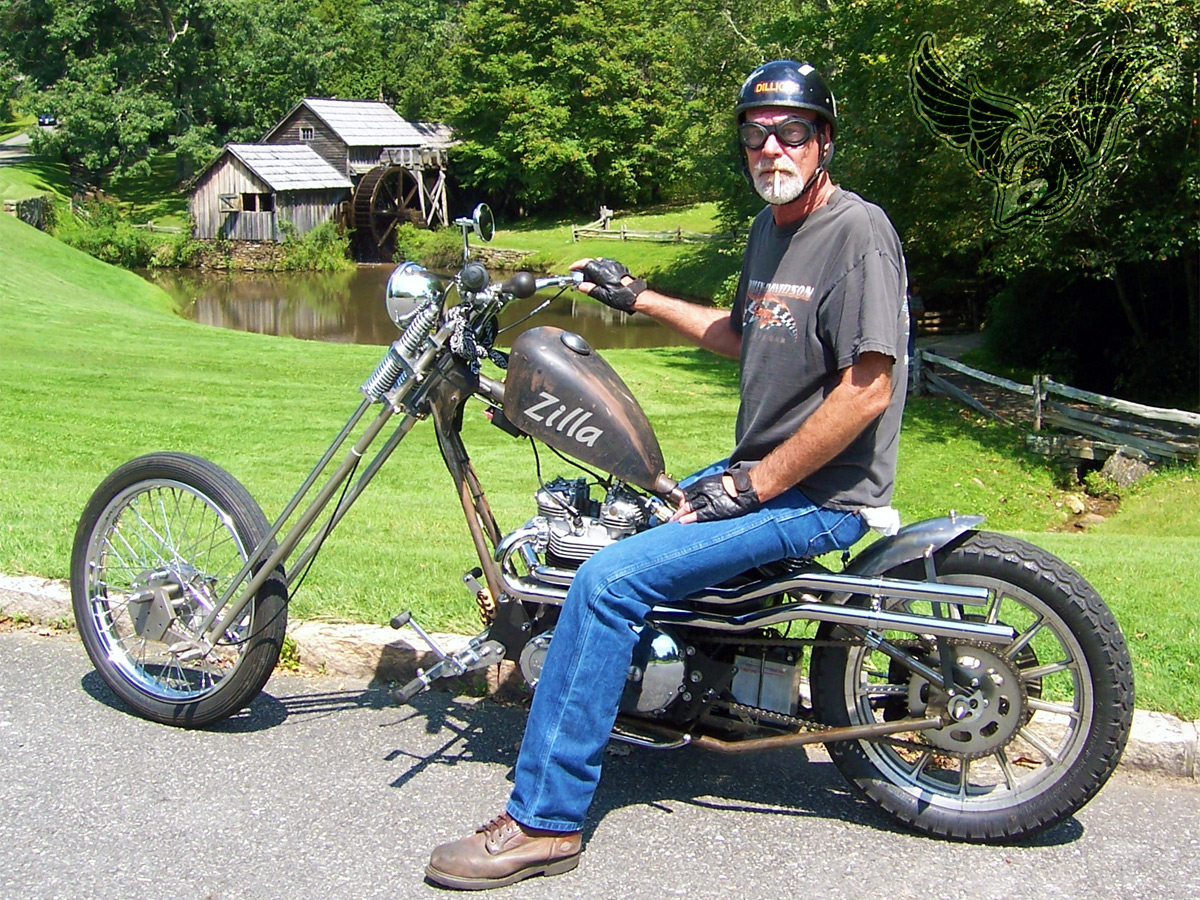