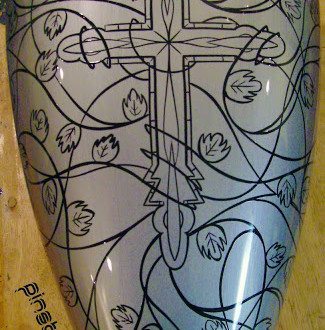 I first discovered the paint and pinstripe work of a young man who calls himself Pinstripe Chris through my association with Jeff. He had just striped a tank for Jeff and it was impressive. I asked Jeff if Chris would like to be profiled on bikerMetric and the following series of questions and answers ensued. 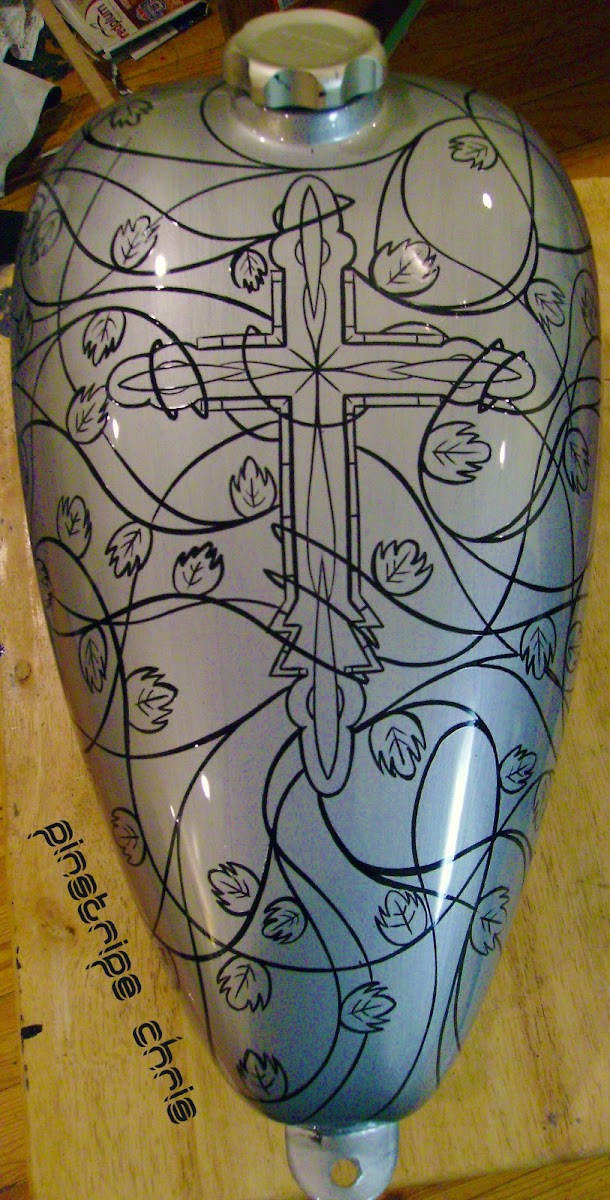 bM: What got you into painting, airbrushing and pinstriping?

PC: There are three different answers: About five years ago I started out as a painters helper at Advanced Collision in Frederick, Maryland to try and learn hands-on what the job is like. I worked under a painter named Mike Gill. Mike is well-known in this area and was an excellent teacher. He had many years of experience along with many stories that were hilarious, but always had a lesson attached. After working with him for a few months he suggested I try out airbrushing. I’d never been a fan and it seemed like a lot of work and very difficult to do, but I attended an airbrush seminar with him where simple but very effective basics. As an attendee of the seminar, I was given the opportunity to buy an Iwata airbrush kit at a reduced rate,so I went for it.

I didn’t enjoy it right away because I came form a drawing background. The changes were both big and small. I practiced on everything I could find and anytime I could. That was almost four years ago.

Pinstriping is another story. I moved to St. Louis after working in Frederick and after eighteen months of that nonsense, I moved back to Maryland and got a job at Hot Rod Refinishers. One of the owners, Jeff, suggested I try pinstriping. I thought, why not?  I practiced on everything I could, whenever I could. That was almost two years ago. It seems the best suggestions come from from the people I’ve worked with and I love trying new things and practicing them like crazy until the next suggestion.

bM: Did you know you were an artist before you began this career?

PC: Not exactly. I’ve been drawing pictures of cars since the sixth grade using mostly gray and colored pencils, but it seemed that all the art classes I participated in wanted to gear things in a direction that I didn’t want to follow. I tried to make every art question turn into an automotive answer. I remember in tenth grade we had to do a self portrait using pastels and mine was of a Ferrari F50. Didn’t help the grade, but it was more important to enjoy what I was doing and be happy with myself, which is still true now. Things have progressed since the pencil years, but it wasn’t until the Sharpie Cadillac that I felt that maybe I was an artist. I don’t call myself an artist though.

bM: Even though you just did? (laughs) It’s okay to be an artist, man. Some of the baddest motherf***ers who ever lived were artists and poets and philosophers. 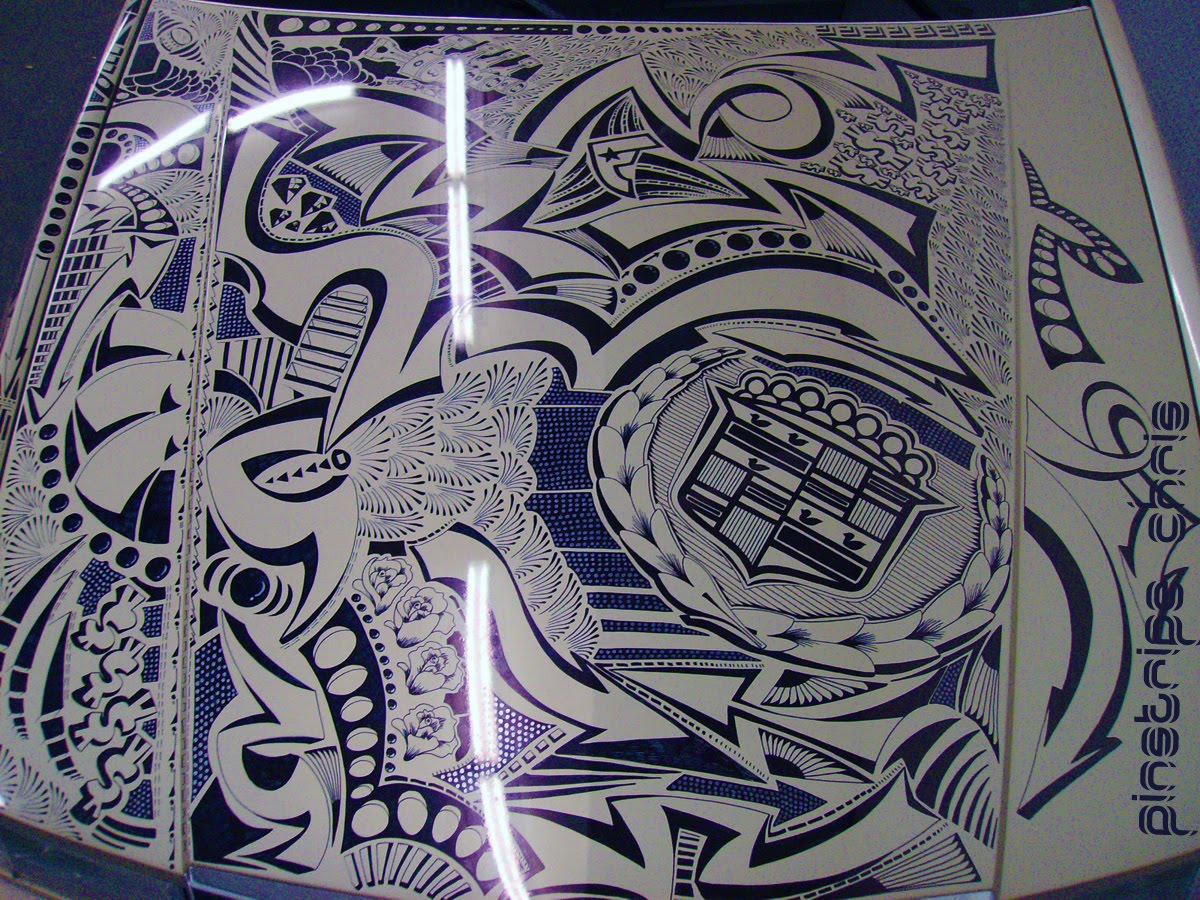 bM: What part of airbrush and pinstriping do you like most?

PC: I’m not sure what I like about airbrushing. It’s a whole lot of fun but it can still be very frustrating. I suppose the best part is learning new things and being able to make things better and better with time and practice. I like pinstriping becasue it’s really challenging and there aren’t many people doing it anymore – certainly not at my age. The same goes with pinstripes; learning new things and progressing is what i like.

bM: Who and what are your influences?

PC: One of my first influences is H.R. Giger.  He’s the guy that did the artwork for the Aliens/Species movies and is an amazing airbrush artist with visions that make you wonder where the **** this guy came up with that stuff. Patrick Guyton is also an amazing airbrush artist as well as Craig Fraiser, Steve Driscoll (the teacher at the airbrush seminar) and Mike Levallee, the original Real Fire guy. I dont really have any pinstripe influences, but I love looking at the artists on the Pinhead Lounge to see what’s being done and whats considered good so I can keep up! Jona Cerwinske is the guy who did the Sharpie Lamborghini and it’s absolutly amaing. He was my influence in getting started with the Sharpie art. Jeff Yarington is always suggesting things to try, or color choices or what I should look into next. I honestly don’t think I’d be where I am today without him. 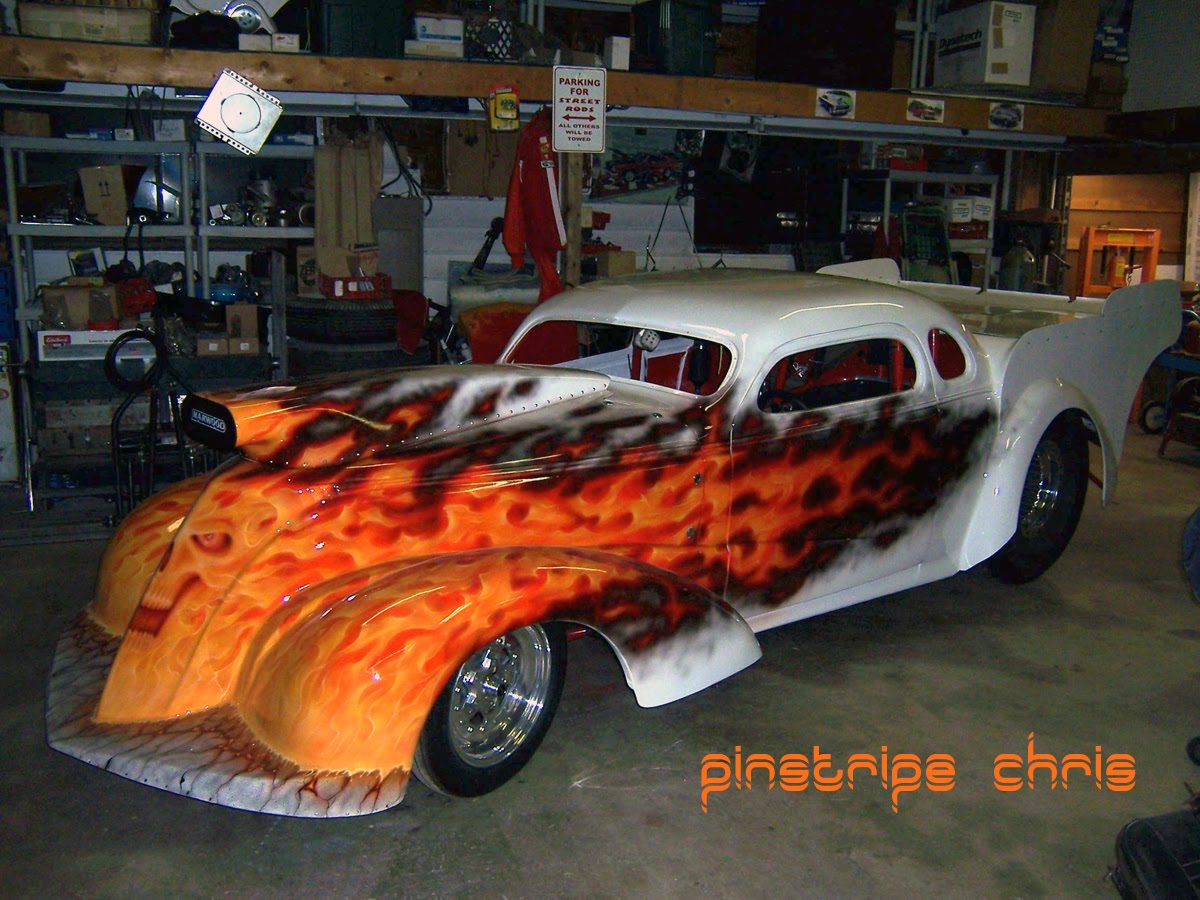 bM: What style do you prefer to work in (ie: pinup, tribal, skulls, flames, etc.)?

PC: I love doing Real Fire; maybe too much. I try to talk people out of doing traditional flames becasue that’s what they are; traditional. I’m slowing enjoying skulls as I practice them more and more, incorporating them into something else. Generally, I like to airbrush things to look organic and natural, like wood, fire and brains; things like that. 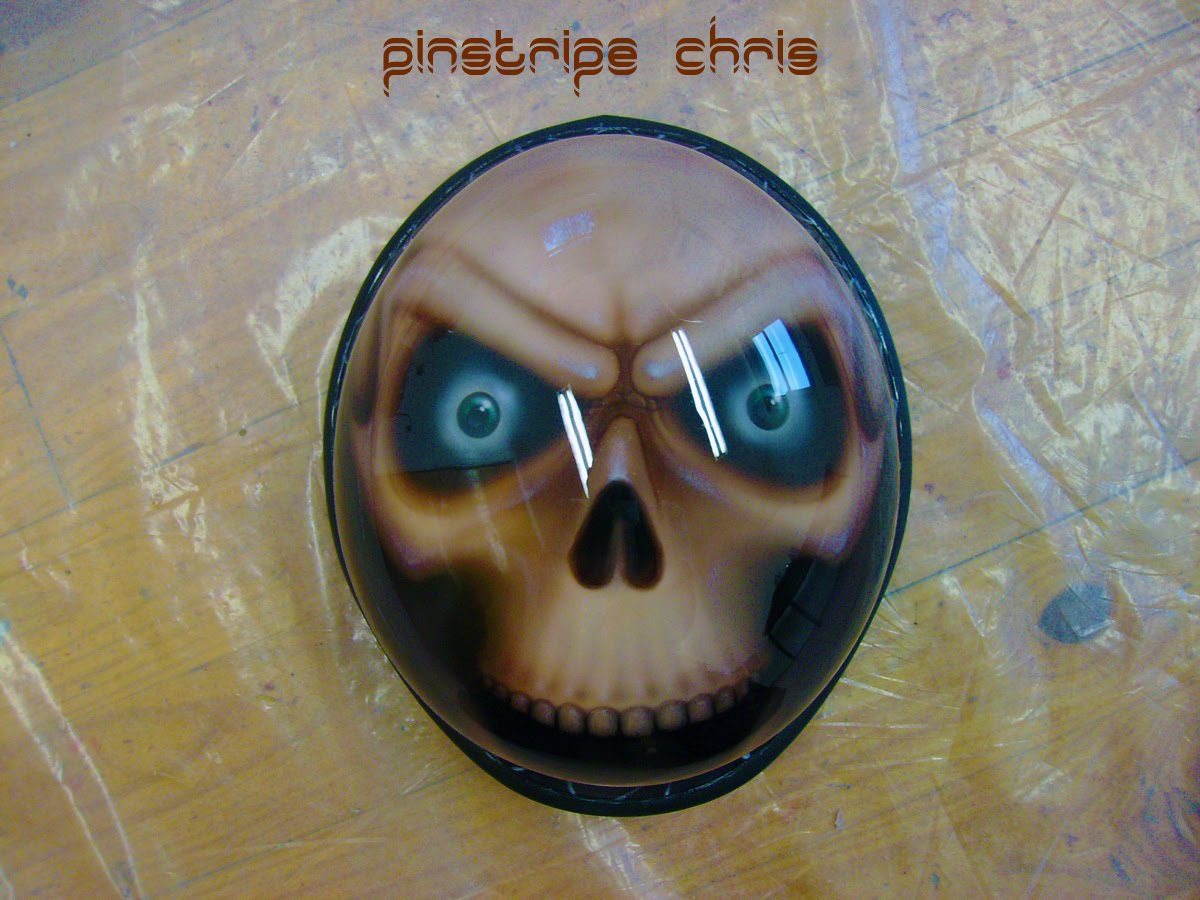 bM: What has been your favorite or most unique gig so far?

PC: Definitely the Sharpie Cadillac. That’s my favorite right now. I took a vacation so the guy could fly me out to Ukiah, California to look at the car and see what we could do. He originally wanted green candy with big sparkly flakes, which is cool, but I’d need to mail my equipment to do it or come up with a new idea. I told him to buy a box of industrial Sharpies so I could show him something. I put a design down that was about 16 by 16 inches on the hood and I said, “now, imagine that, only everywhere.” He was sold. I put about 30 hours into doing one side and the hood before I had to come home. I have to fly back to finish it up but man, I love it. It’s a lot of fun just drawing on a car, whatever the theme or style is, and just flowing with it. No over-spray, no dry times. 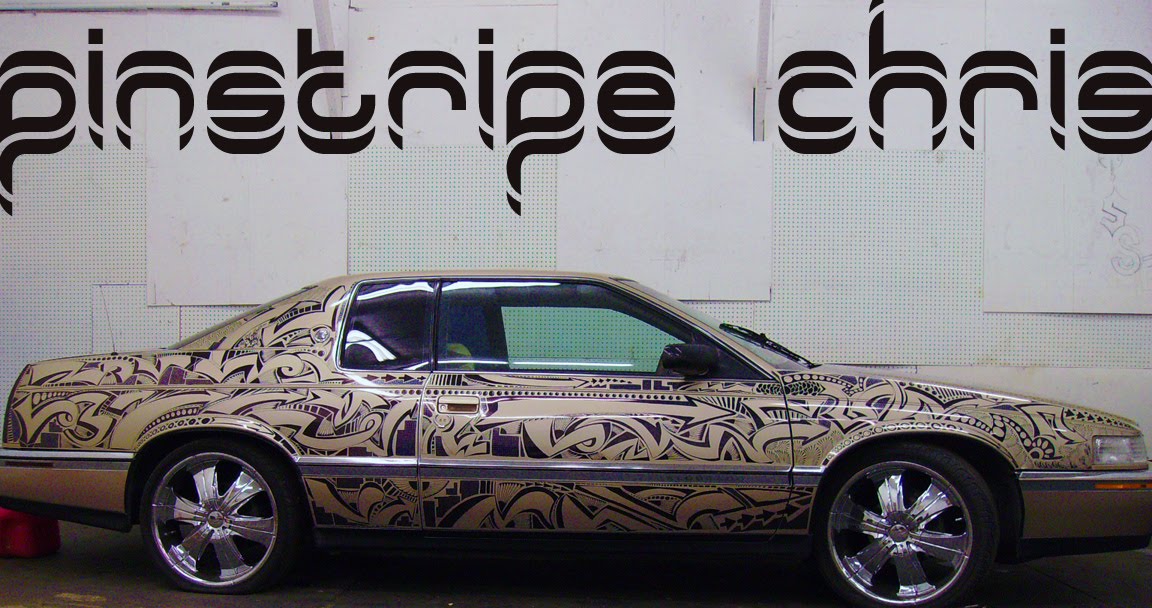 bM: If you could do any project, what would it be?

PC: I want to meet someone that has a Ferrari or Lamborghini that they want crazy artwork done all over. That would be sweet. 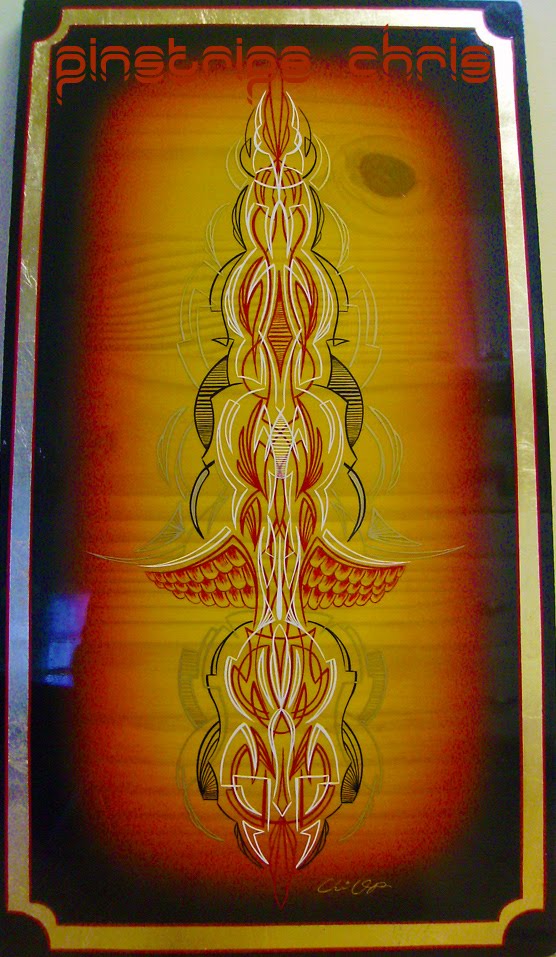 bM: I’ve seen photos of you and you look like a punk kid. Are you old enough to drink? What is your favorite beer?

PC: Yes, I’m 23, but I can’t stand the taste of beer. When I was 14, my neighbor offerd me some beer and I tried it. I have no idea why I drank it, I guess I just wanted to be cool. I didn’t know at the time that Miliwakee’s Best is nastier than most, if not the nastiest beer of all. But because of that, I can’t even stand the smell of beer. Besides, drinking isn’t my style and I’m not sure I could do what I do if I did!

bM: Yeah. Our founding fathers fomenting a revolution in pubs over pints were crazy, huh? (smirks)

Sorry to hear about your unfortunate first taste. I’ve heard Milwaukee’s Best described as smelling of “old couch cushions” and tasting like them, too. I do not disagree. Regardless, the famous quote from Ben Franklin that “beer is proof that *** loves us and wants us to be happy” is a thought traced back as far as 4,000 years ago to the Sumerian “Hymn to Ninkasi,” the goddess of brewing. The hymn is also a recipe for making beer. No one knows exactly how beer was first discovered, but these early accounts, with pictographs of what is recognizably barley, show bread being baked, then crumbled into water to make a mash, which is then made into a drink that is recorded as making people feel “exhilarated, wonderful and blissful.” As far as archaeologists can tell, the Sumerians were the first civilized culture to brew beer. They had discovered a “divine drink” which certainly was “a gift from the gods.”

I could go on with historical references to the importance of beer in relation to great moments of civilization over the past few millennia in art, religion, phiolosophy, and even the trading for goods and services; but instead I’ll suggest that one does not confuse the drink with the inability to moderate it’s consumption. Maybe one day we’ll find a beer you enjoy and we’ll share a pint or three and laugh, man.

Thanks for taking the time to tell us about your skills and talents, Chris. Good luck!