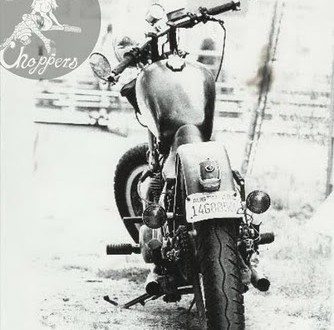 It’s After Hours Choppers, ladies and gentlemen (cough). Excuse me, I mean, show me yout **** and gimme yer money. ***, I love strippers and boobies. So does Gabe, the proprietor of AHC, a little shop in Newcastle, Northern California. He’s been cranking out whatever he feels like for dudes who aren’t fools and babes unafraid for many years.

I’ve gotten to know Gabe a little bit through some emails and a phone call over the past ten weeks and I have to say that he does it his way and I approve. You got a Sporty? No problem. An XS? Cool. He isn’t the type to care what it is as long as it isn’t some overblown chromed-out extension of how small your ***** is. He’s honest and affordable, easy to talk to and quick to offer his knowledge while professing to need to learn more. Here are a few words from him and some photos of the work he creates.

After Hours Choppers…. what to say? It’s a one-man company that isn’t about to get any bigger. I hate the idea of waking up at a decent hour to chatty walk-ins, employees I’ve got to babysit and the financial burden of big insurance and all the bull***t that goes with it. 3 years ago I lost my job and instead of collecting a check that I didn’t earn, I went full time with my hobby. Since then I’ve learned how little I want to go back to that kind of job and how much I love riding across the country meeting cool people and seeing what makes this the greatest country on the planet…. That’s something we forget. 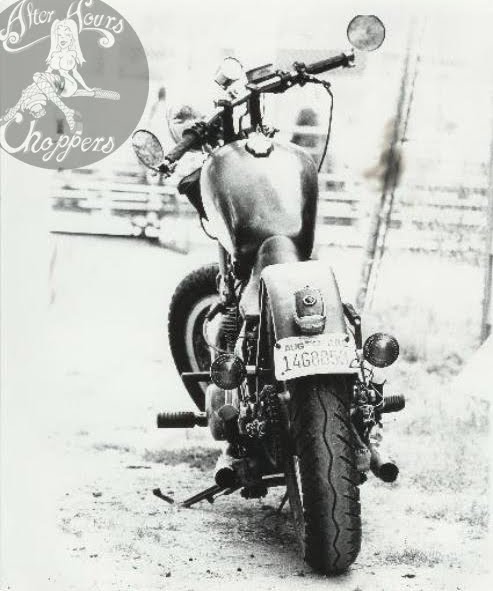 My first bike was an XS650. I strutted the frame and stripped it down a bit, not nearly as much as I would today. Back then I had a flux core MIG and a hacksaw in a 4×8 room meant to store a lawnmower and no internet to copy everyone else’s ideas. A lot of dudes getting into bikes just can’t imagine a world where you have to figure things out on your own and just do what YOU like. There was no popular chopper craze and nobody else really liked what I was doing.

My next bike was an Ironhead that a buddy had in a wall locker in pieces. My girlfriend Lois (now my wife) drummed up the $1500 and bought it for my birthday, which was pretty cool s**t. That bike has seen three complete builds and almost no road time. I used it as a canvas for years as I changed my mind about everything on it. Soon enough it will have the first Spartan Ironhead frame and an early Springer and king & queen seat that I bought a recent swap meet, along with an old Wassel who’s paint is beautifully cracked. For years the bike sat in a spare bedroom with a mountain of collected treasures. I think some decent seat time will finally be in order. 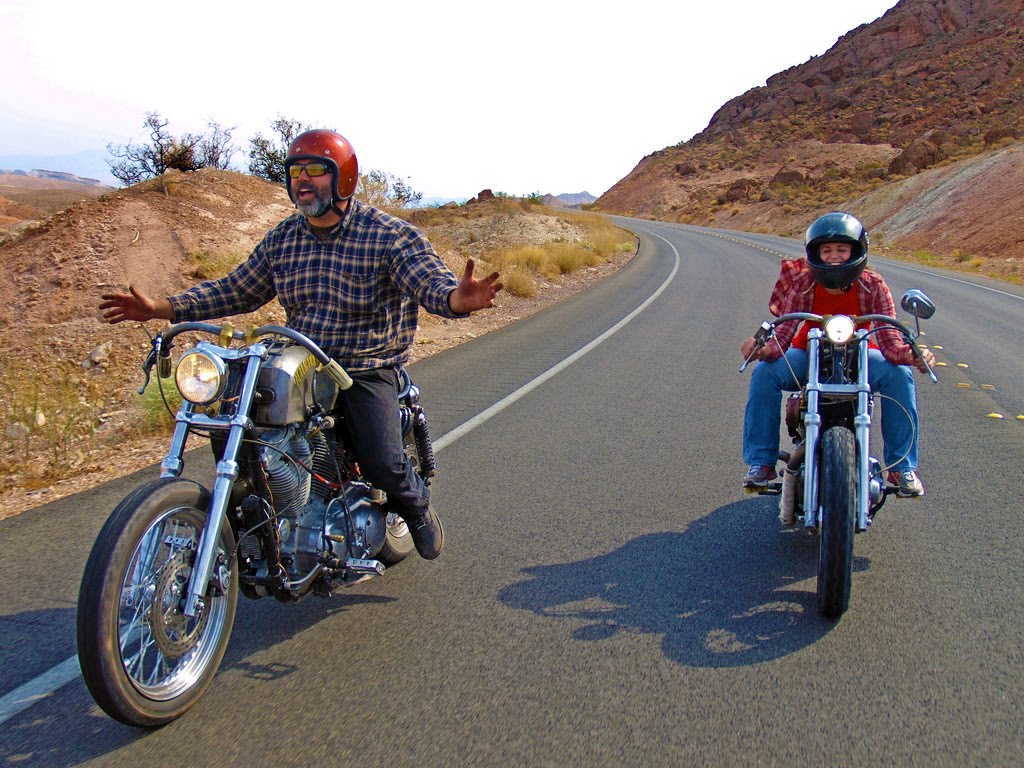 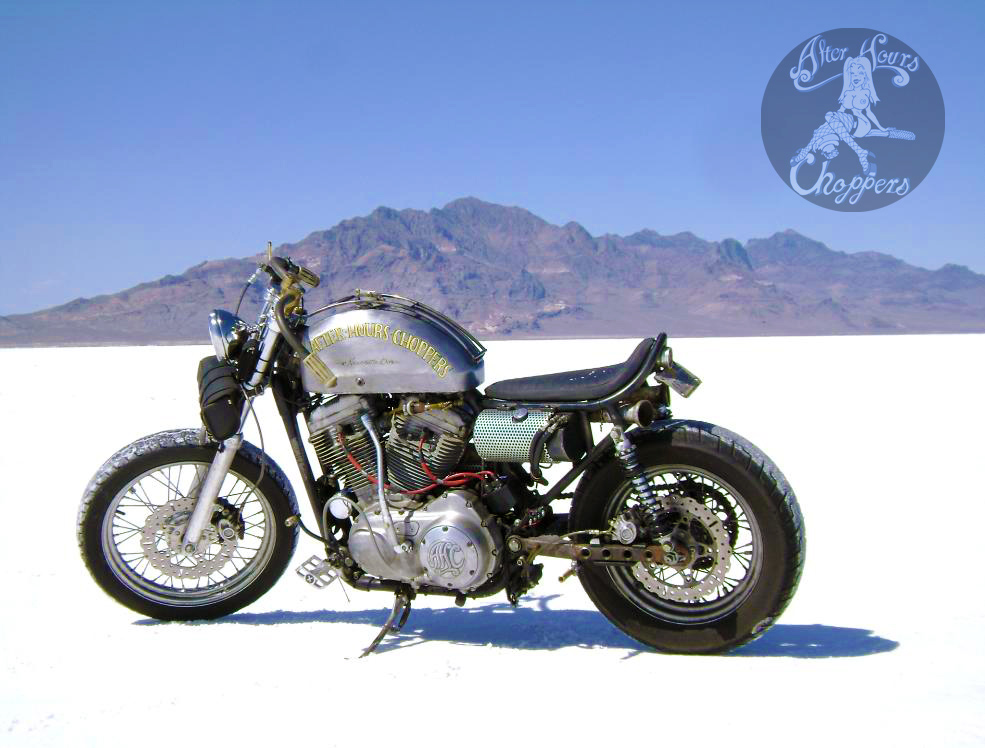 Most of my work has been on Sportsters. They’re cheap to find and the easiest bike to build and for the most part will still be worth what you have in it. Some of my future parts will center around five speed, solid mount Sporty’s and mostly a full suspension build like Clyde. For me that’s the true purpose of Harley’s little race bike. I love a rigid lane-splitting Ironhead and some of the skinny evo chops that guys are building, but if you go to any show you’ll see a definite “how-to-build-a-sporty-chopper” percentage of redundant-looking bikes. Thank you, internet. I have seen some great one-off builds that were based on the inexpensive bike and am always excited to see what dudes can do with their passion for motorcycles and fabricating. Because I do this for a living I can tell that I sometimes get caught up in the “time is money” equation, and I’d like to lose that mentality as it limits my work at times. 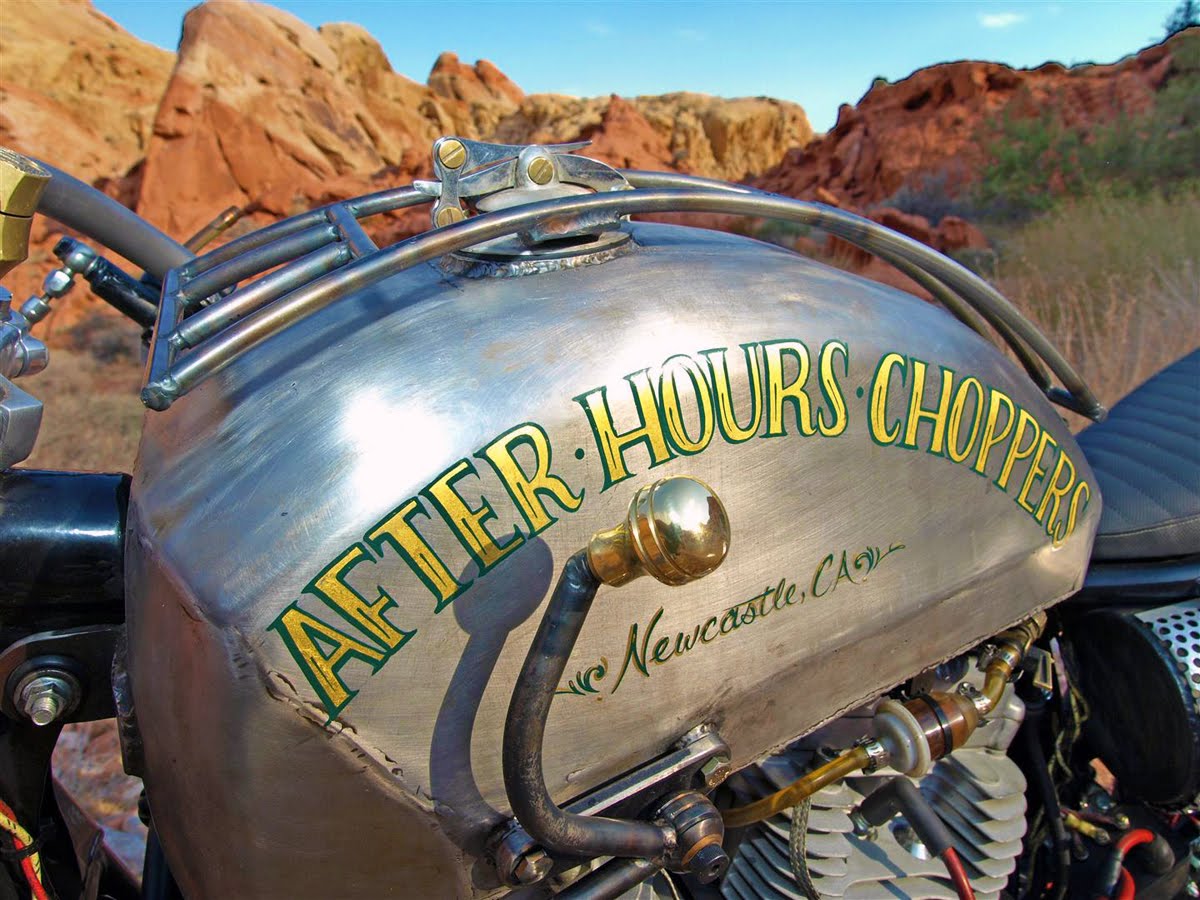 All my parts came from disliking what I saw on the market. I think most dudes that have original parts started the same way and have sprouted out of the ground in the past five to ten years. There are plenty of great shops around these days. The first part I made were shorty brass risers. It took me over six months to get samples dialed in and when the first Smoke Out West came around I still had only one unfinished riser to show. I rode out and carried it from booth to booth asking dudes if they’d buy them if I had them to sell. Chica was the most influential and seemed pretty excited about it. Luckily for me I ran into Jim and Ed from Justified Defiance and we hit it off pretty well. They were the first to carry my stuff and have been a great help over the years. I also met Joe from Crime Scene Choppers and FabKev at that show and we’re all pretty good friends and bounce ideas off each other now & then. I’d have to say that the first Smoke Out West was the single best event for AHC. I had the website up for about two years prior to that and it seemed that a few dudes out there had been on the site and got a chuckle out of it. I’ve actually met lots of good friends because of the site and yes, I’ve had to listen to many whiners cry about getting ****-hurt as well. 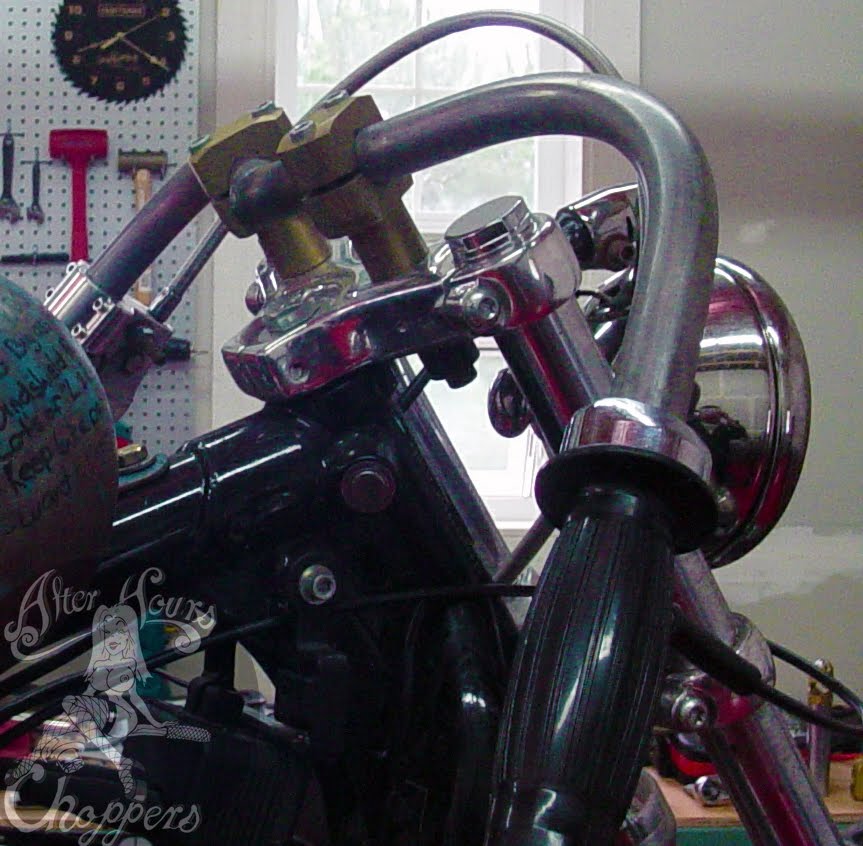 Although I was making the parts manually at first I just couldn’t keep it up. I now have some parts made by a local CNC guy but I still finish every piece myself in my little shop. I make many parts by hand and a large part of my job is sitting in front of a lathe for many hours doing repetitive **** that I hate but gotta do. Maybe that’s why other dudes hire an employee. Some of the cool handmade things I make get engraving done by Steve at Lillian Rose Choppers. He’s been doing some great work with riser caps and air cleaners and more that really set a bike off with a bit of personal detail. He’s built some really clean bikes and many of you have seen his work on my own bikes and parts.

It wasn’t until I met George from Spartan and saw some of the bikes that he’s put together that I realized that I had to step up my game. AHC is a parts company and not a bike building business, but his “War Pigs” ride was off the chain and I knew that my scroungy bikes were fun to ride but sad to look at in comparison. The same went for Atomic Trent, his bikes stand apart from anybody’s and I do my best to absorb good influences and ideas. Spending time with these guys gets my mind right and puts ideas into play. Hopefully I can make what’s in my head a reality after the big move in a year. 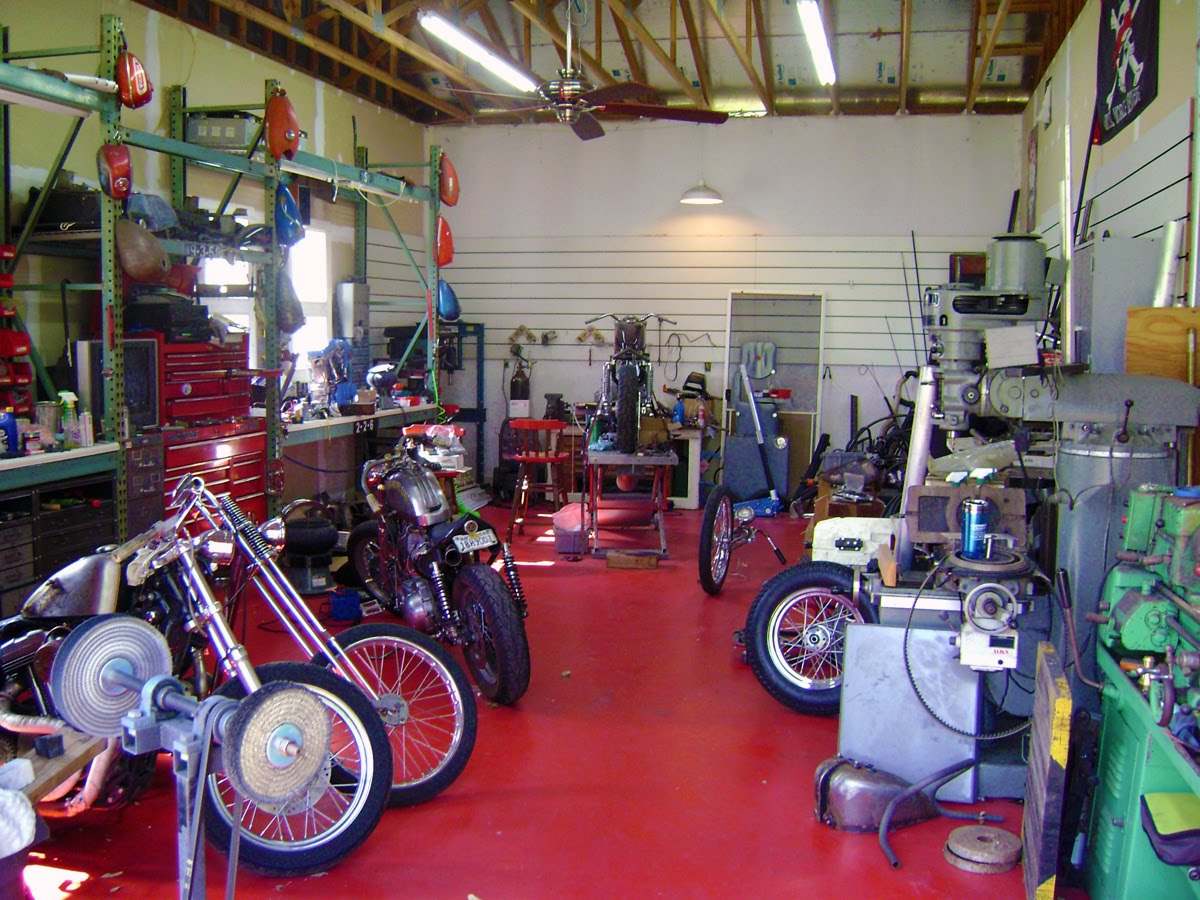 With a dual Linkert Panhead and a ‘45 waiting for much love, I hope to put together a couple bikes that keep with tradition and have lots of handmade details. I try to evolve as a motorcycle enthusiast, but I still f***ing hate baggers.

I’ve got a ton of plans for the future for both available parts and bikes that I’ve been collecting for the past five years. With the economy the way it is, we’re downsizing the homestead and remodeling an old house that we were fortunate enough to pay for outright. We hope to be able to have it liveable in the next year and the shop done soon after. The place is truly a “barn find.” I mention this only because it’s the means by which many of my ambitions will be realized. Hopefully you’ll be able to check out the AHC website in a couple years and see many new things that I just haven’t had the time or money to accomplish. Soon enough I’ll be able to reach for that brass ring and live the good life, or at least as good as any working man can expect. 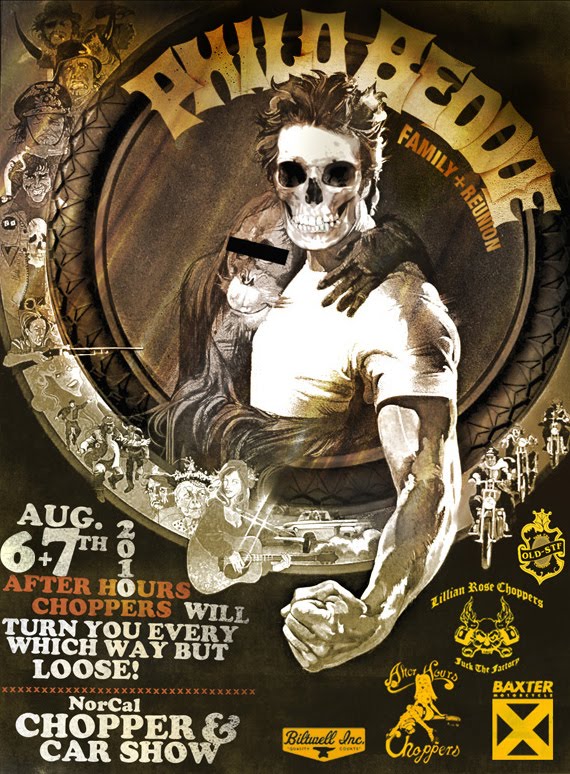 This year the only bike I need to get done is my long haul bike that will keep me happy for a month on the road at a time. My friends like to ask “how the bagger coming along?” I get a laugh out of it but it’s still the real deal; a rigid with a jockey and modified Alice pack that holds enough to keep me comfortable through the seasons. With an 88″ Evo and a six-speed with a sissy bar to lean against, I should still be able to walk upright after a 1000 mile day. This bike will be the s**t for what I’ve come to want out of life. The Long Road will be fun and after that the Ground Zero Throwdown will be a great trip as well, it’ll be my fourth year cooking at this cool event and I always have a great time. We’ll be having a party (thePhilo.com) a couple weeks before I head out to Trent’s, so if your readers are close enough, come spend the weekend with us in NorCal.

With knuckleheads out there proclaiming to be top builders and getting by with pseudo-fame brought on by the internet buddy system, this can be a trivial business. There are so many truly great little shops that aren’t part of the chopper stroke fest and then there are names that get mentioned over and over who have done almost nothing but play the cool guy role. I have done nothing great, nor do I plan to. I’m going to make some cool parts for a small percentage of dudes and build my own bikes that I can’t get out of my head. I will keep learning about all things motorcycle and hopefully continue to grow as a builder and parts maker. I don’t have another job that pays the bills and I can’t think of what I’d rather do other than own a honky tonk & grill somewhere in Mexico. The baddass biker bull***t image is for punks and posers. We were brought up in the biker world with great BBQ’s, running around drunk and naked, and just having fun in life. 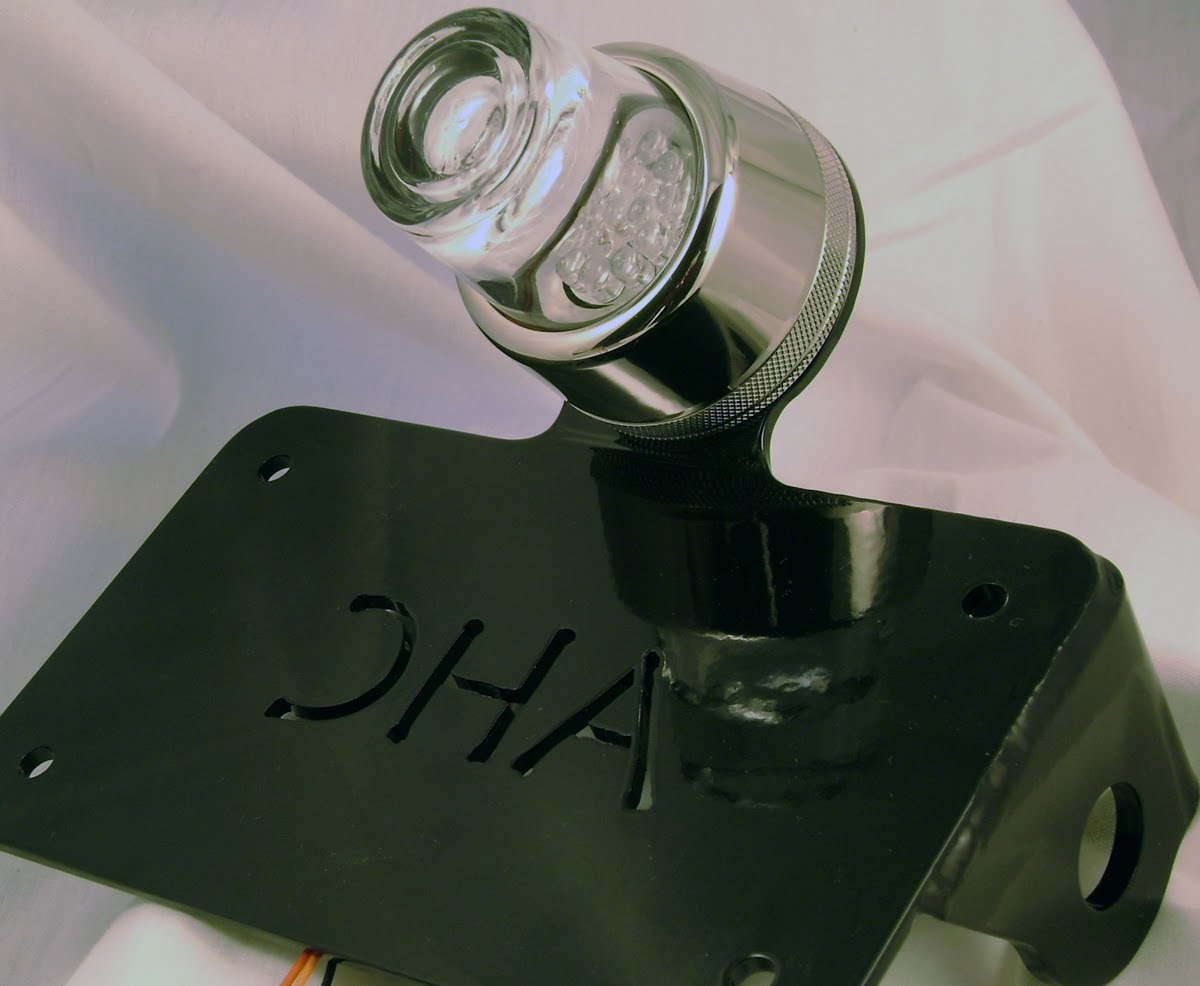 Don’t be a stranger at the Smoke Outs, come by the booth and bull***t a bit. By all means, swing in and get an AHC sticker for your toolbox. If I’m scowling or in a bad mood, it’s just that I’m hungry or sober, don’t take it personally. 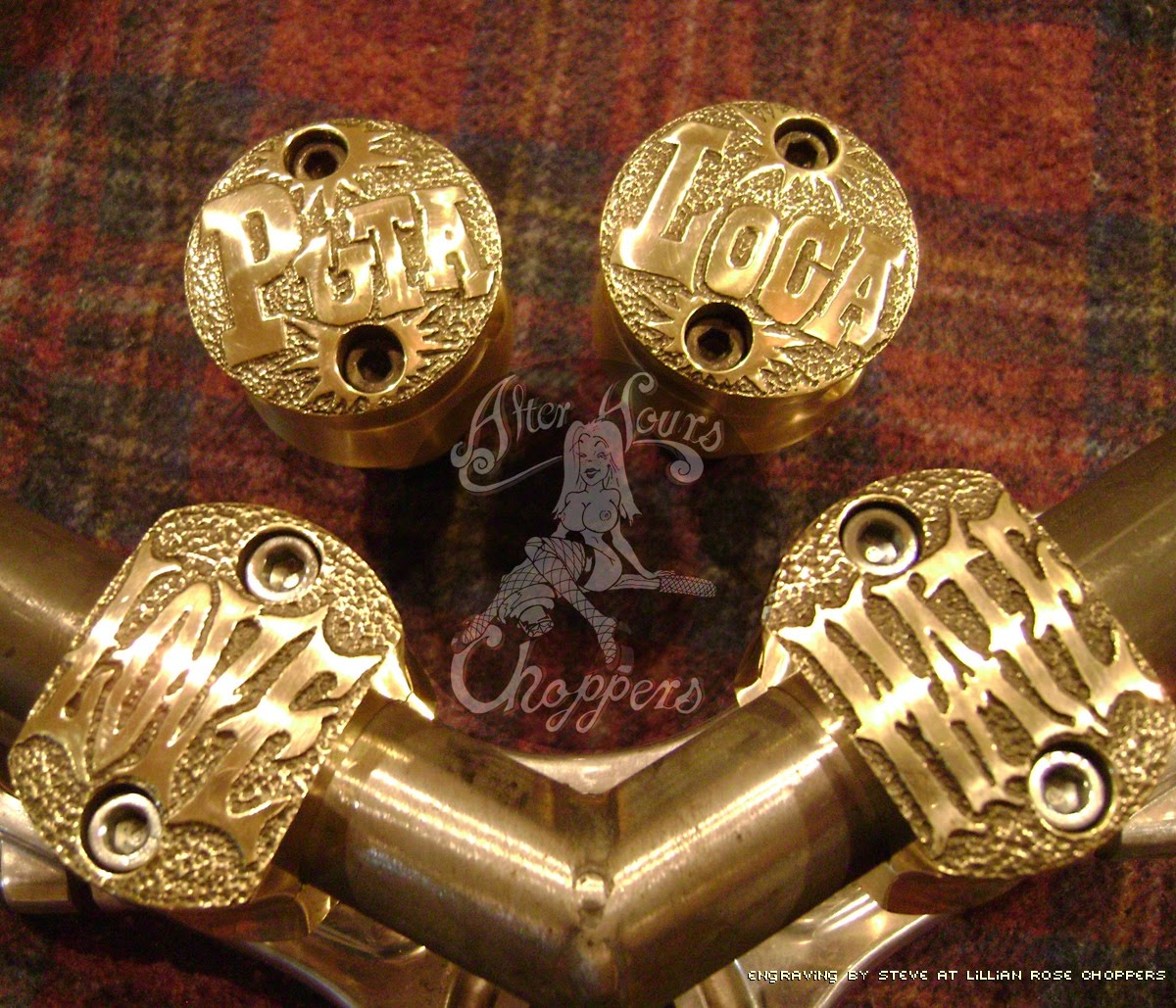 There you go, folks. Gabe’s ride throughout old mining towns in Northern California, The Philo, is basically a get-together of like-minded, hand-built chopper dudes who are out to have fun, ride, eat and drink beer. It doesn’t matter if you’re riding a metric or a Harley. If you’re in the ‘hood, contact Gabe at After Hours Choppers and let him know you read about his ride and party on bikerMetric. We’ll post the route and more info about the Philo ride soon. 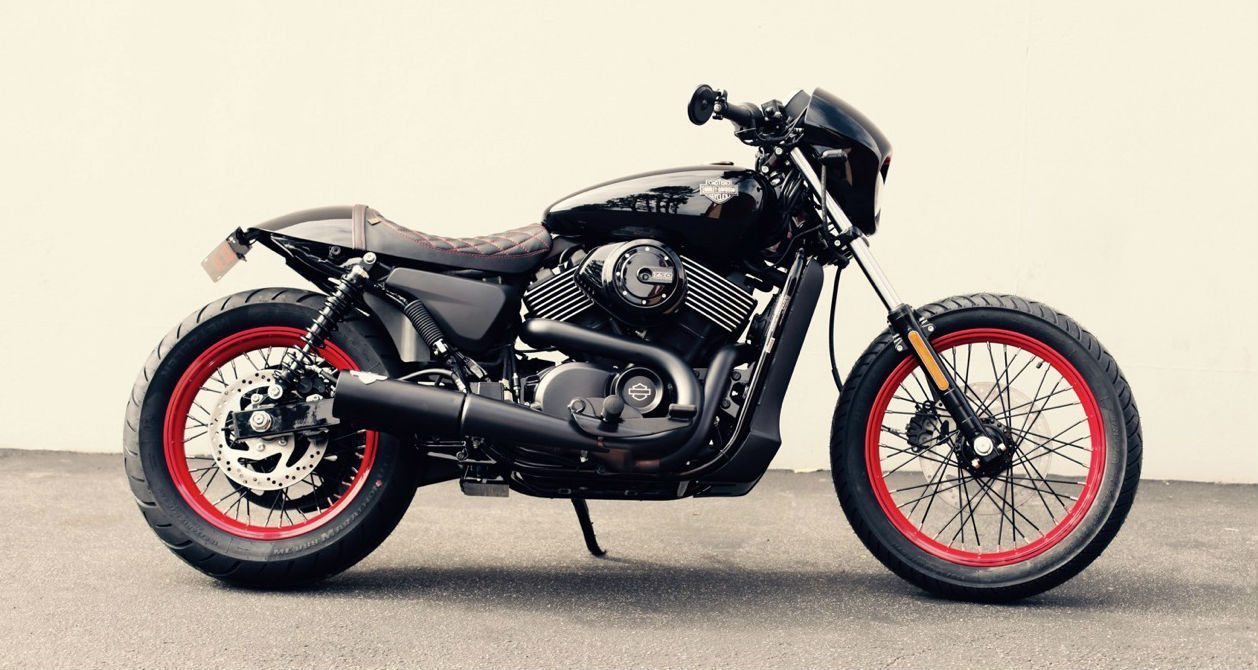 bikerMetric is the land of Metric bobbers, choppers, cafe racers, and a ...