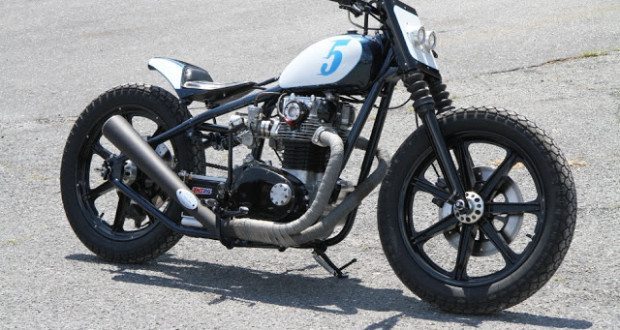 Here is another patented bikerMetric interview. It’s our 12th and I’m pleased to present you with Jeremy Cupp, the mastermind behind LC Fabrications of Grottoes, Virginia. I’ve been a big fan of his work for years and am very grateful for his thoughtful and humorous responses to my purposely agitating questions. That’s the deal with an interview on bM. I screw with you with good nature and you go off.

So crack a brew, sit back, and learn some stuff you didn’t know about Jeremy and LC Fab. 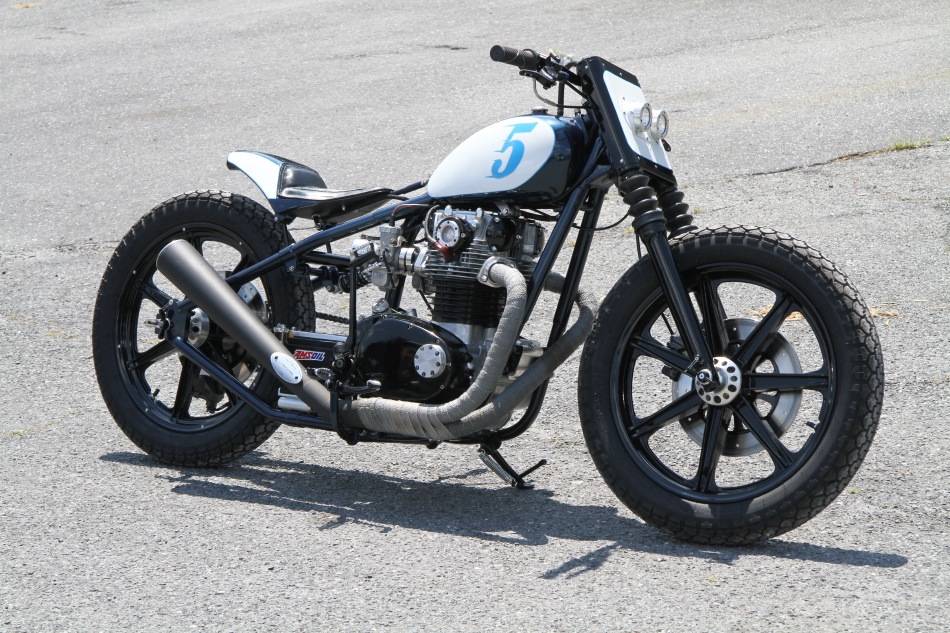 TR: Please tell us about the history of LC Fab. What made you want to build custom motorbikes? How long have you been doing so?

JC: I’ve been working around the fab/machining trades since I was a kid. I always wanted to be a welder when I grew up (not sure when that will be). I had a bunch of old Japanese bikes but always wanted a Harley and couldn’t afford one, so in 2004 I built one from a pile of early evo 883 stuff. When that was finished I thought I could do better and the cycle has kind of continued since then. Eventually, building bikes started to get expensive, so I started LC Fab to try and fund the addiction.

TR: When you started, did you plan on fame, fortune, or just enough to own a clean home while providing for some hot babe and the kids you made?

JC: Ha Ha… no. Fame and fortune equals less time to work on bikes, which is the whole point; to make an honest living and feed the kids by messing around with bikes all day. Can’t think of much more a man could want. 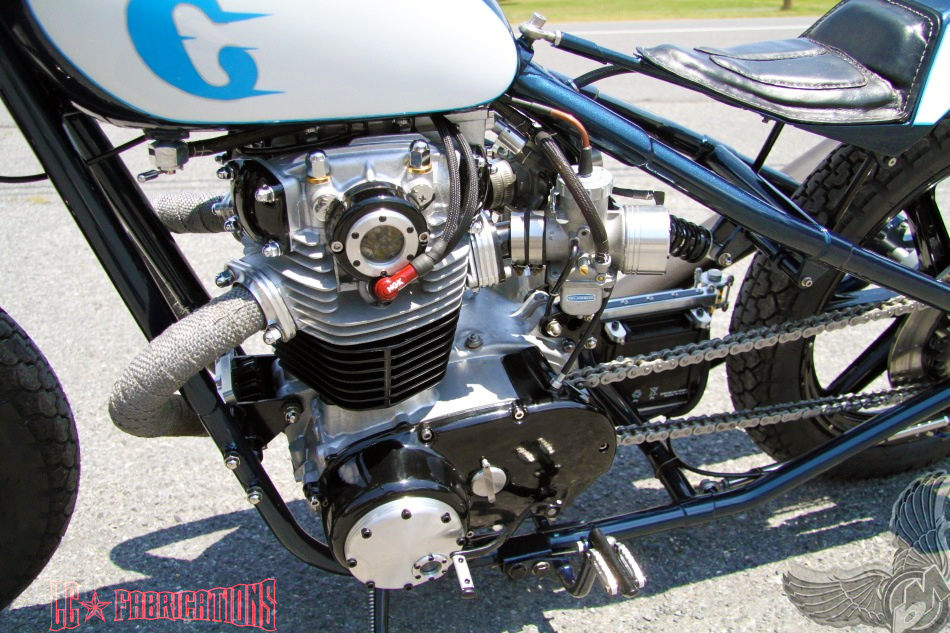 TR: Oh, I can think of stuff a man could want, but I’ve vowed to make this place a little cleaner. You build all sorts of customs starting builds with BSA, Harley, and even metric bike motors. What engine or manufacturer do you prefer to work with? Is there a style you dig most?

JC: I really think every manufacturer has done both great bikes and total ****. You’ve just gotta sort through it all and find what you like. I am incredibly fond of the modern Triumph twins, it’s a well-engineered machine but still feels like a motorcycle, ya know? As far as style, I like anything 1930’s or older, from buildings to machines to all sorts of transport. You can really look at each piece and see a man’s labor and his passion going into it. Now everyone wants to do as little as possible for as much as possible. In those days a man really had to want to earn his dollar. 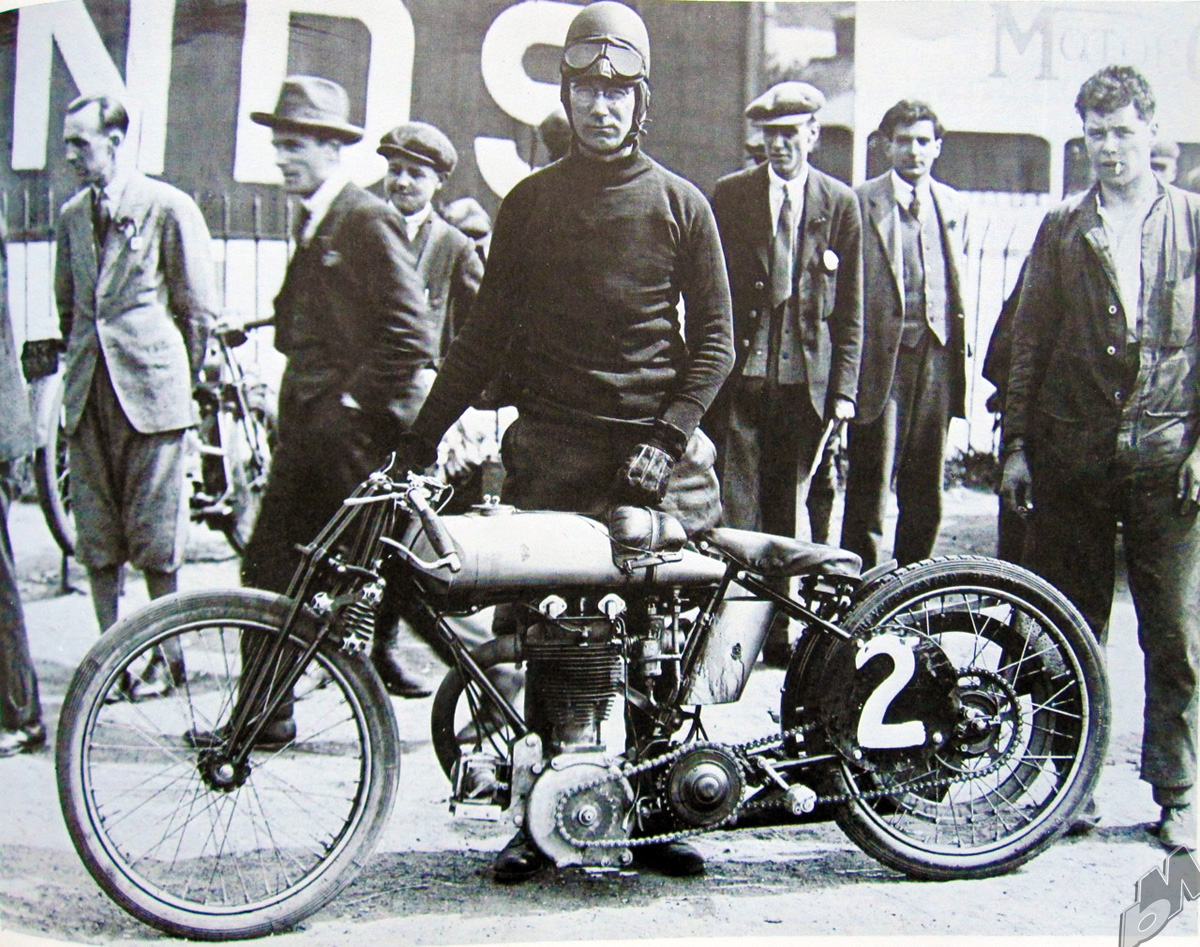 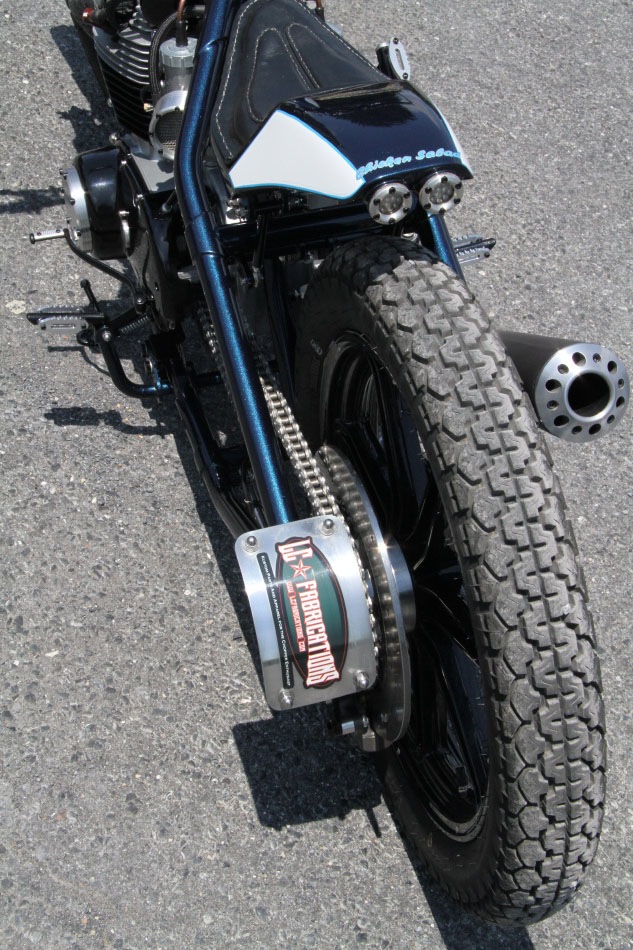 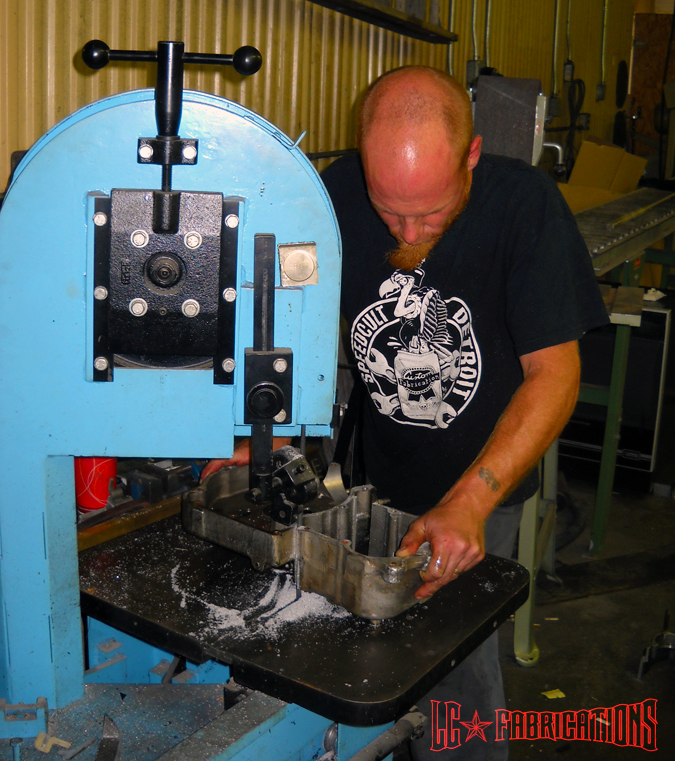 TR: Yes. Welcome to one of the realizations of why Western society is collapsing

. We’ll get to that later. What financial factors determine what you build? Do you only work for paying clients, or do you do whatever you want and see what happens?

JC: I build what I can get my hands on cheap. Most of my bikes started as great salvage deals or a freebie from a buddy or whatever. It’s interesting to see if I can make some unwanted junk turn into something really nice. I really don’t like working for customers that know what they want because I don’t want to do what they want. When I go to a tattoo shop, I say “give me a cool tattoo,” and leave the rest to the artist. It is after all what he does for a living. It’s nice when someone says “I want a disc brake setup for my Indian plunger frame, you figure it out.” 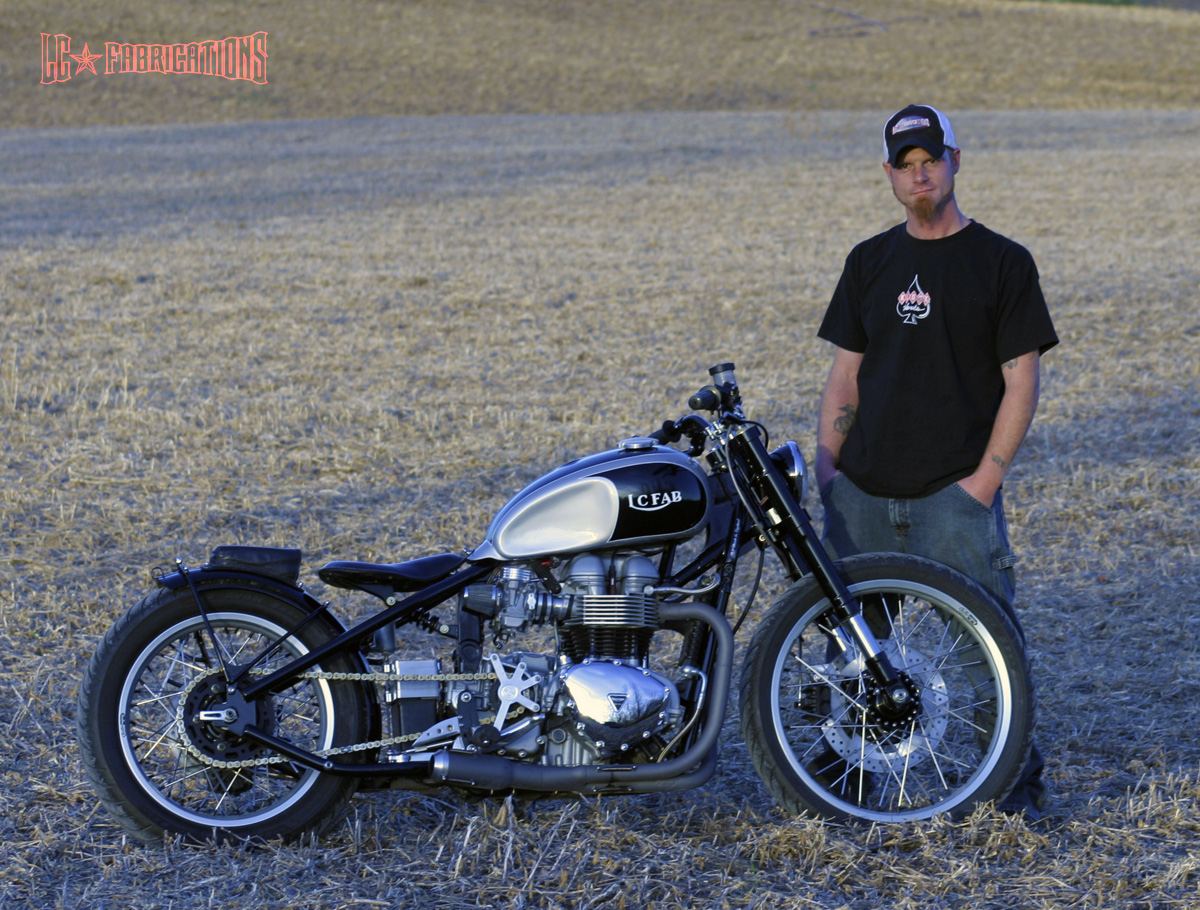 jeremy and “the bonnie”

TR: Oh man. When I get a tat I’ve meditated upon it for six months. That’s my motto. Except for the times I didn’t. You wanna build a bike for me? I know exactly what I want! Okay. End of the world prophecy prep time. It’s December 20th, 2012. Are you loaded with canned food, ammunition and alcohol, or do you think numerous prophecies of the world’s end on the following day are bull***t?

JC: Well, the real truth of that matter is that no one shall know the day nor the hour, but if you fools are right and Dec. 21 is the day of Armageddon, me and mine will already be gone! Besides, ever stop to think that when the Aztec calendar guy is making this thing for thousands of years ahead of time that he eventually decided, “screw it. If they make it that far they can finish it?”

TR: Not even the angels in heaven, man. But “you fools?” Come on, man. Religious fanatics thinking, “screw it?” Dude. Religious fanatics kill for their definition of truth. Also, it’s the Mayans that created the calendar that ends on that day. And some crazy mushroom philosopher deciphered the i Ching chronologically and determined that it ends on the same day. You don’t assume I believe everything I lay down here, do you? It’s all a setup for heated discussion, but I always vouch for the madman.

“Beware, the Lord is about to take firm hold of you and hurl you away, O you mighty man.” Here is a self portrait of me smirking: 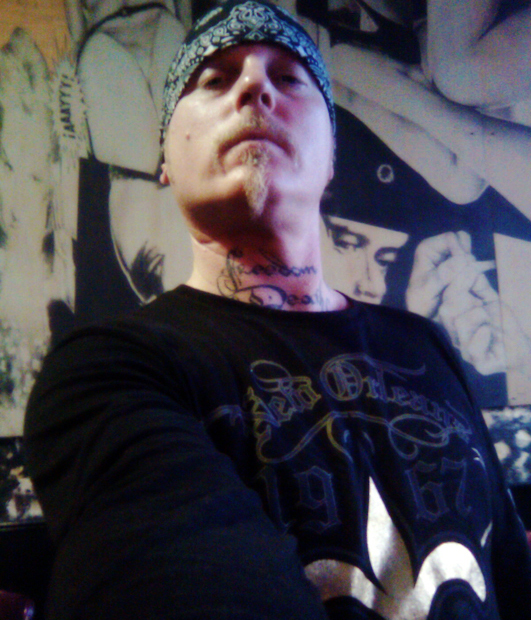 Jeremy, you recently built a slick XS650 tracker. It’s your first foray into the metric world after numerous British and American bikes. A builder of your stature rarely goes from classic Trumps to cheap Yamahas. What factors played into making the “Chicken Salad?”

JC: Ha Ha. My stature. Not sure what to think of that one. I just make a few motorcycles now and then. Chicken Salad started because I was spending all of my money developing and manufacturing some new parts and really didn’t have the cash to put up to start another bike. My buddy Bruce shows up with this Yamaha that he’d cut in half with a Sawzall and then lost interest. He donated it to me and I figured “why not, it’s here and it’s free!” As I got going I got more and more into it and I think that old Yamaha came out pretty nice. 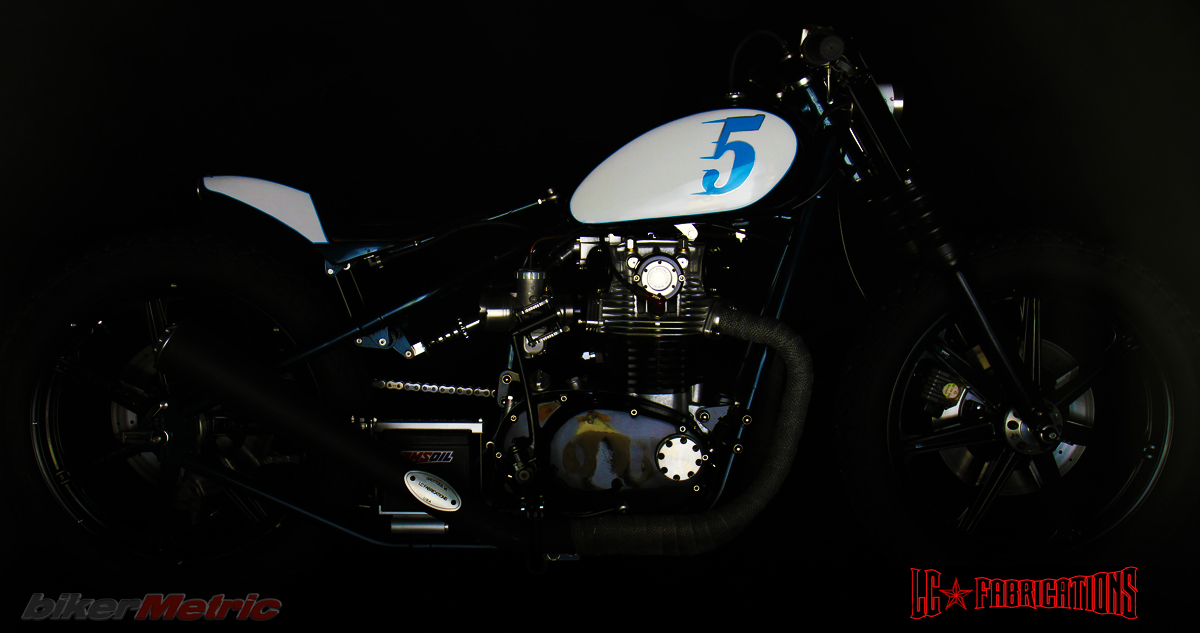 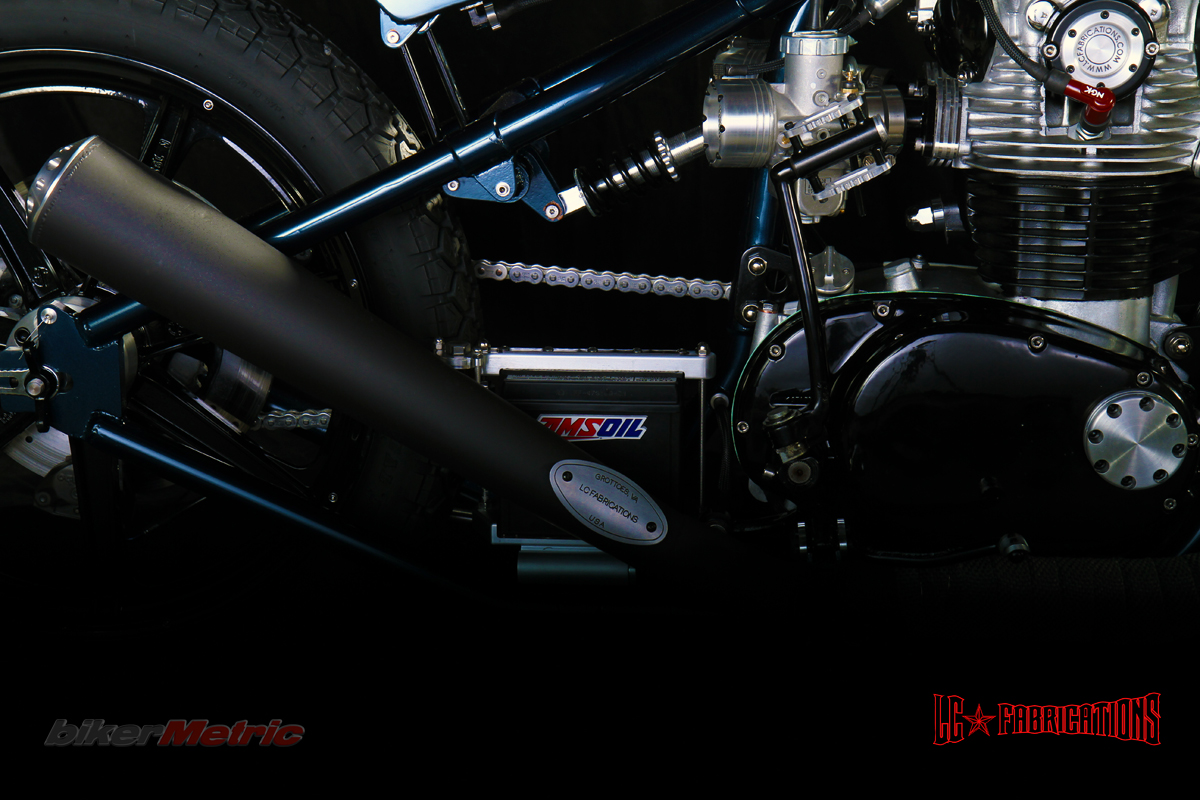 TR: Indeed, man. There are so many interesting fabricated elements to it, much like all you do. The Birmingham Bee-liner is the most incredible BSA custom I have ever seen. Please tell us about some of the fabrication elements that are unique to this bike; ones that have never been accomplished by anybody else in the world, and also what is rarely done, such fuel in the frame, the front end design, mechanical modifications, and whatever you can tell us that hasn’t already made print because hey, when you read bM, you get something you can’t get anywhere. Motherlovers. 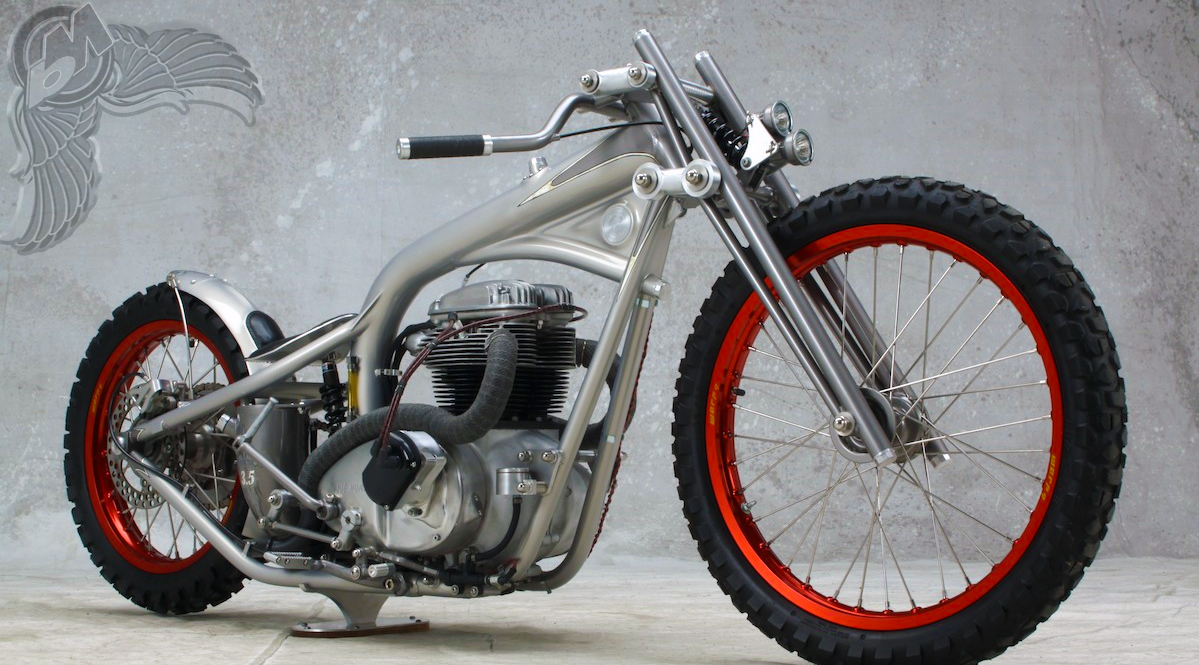 JC: The frame was a donor. Nobody likes the OIF (oil in frame) so I thought I’d try to make one cool. Really, I don’t like to spend money on new parts or time waiting for them to ship, so I try to figure out how to use what I have or can get my hands on easily. This really forces you to get creative! Don’t get me wrong, sometimes stuff winds up in the scrap bin the next morning but sometimes this method works out really well. As for Bee-liner do-dads that haven’t made print; the fuel is fed to the carburetor using a vacuum-operated fuel pump from a John Deere lawn mower, the other question of the day is it holds exactly 1.5 gallons of gas. 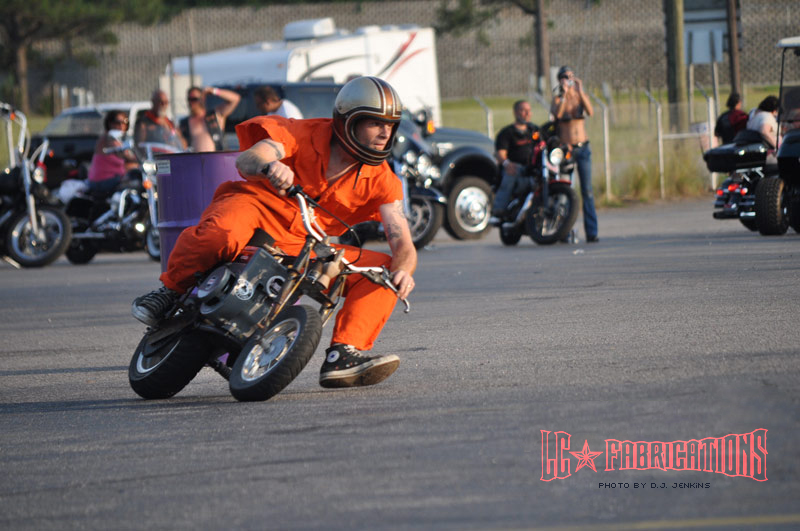 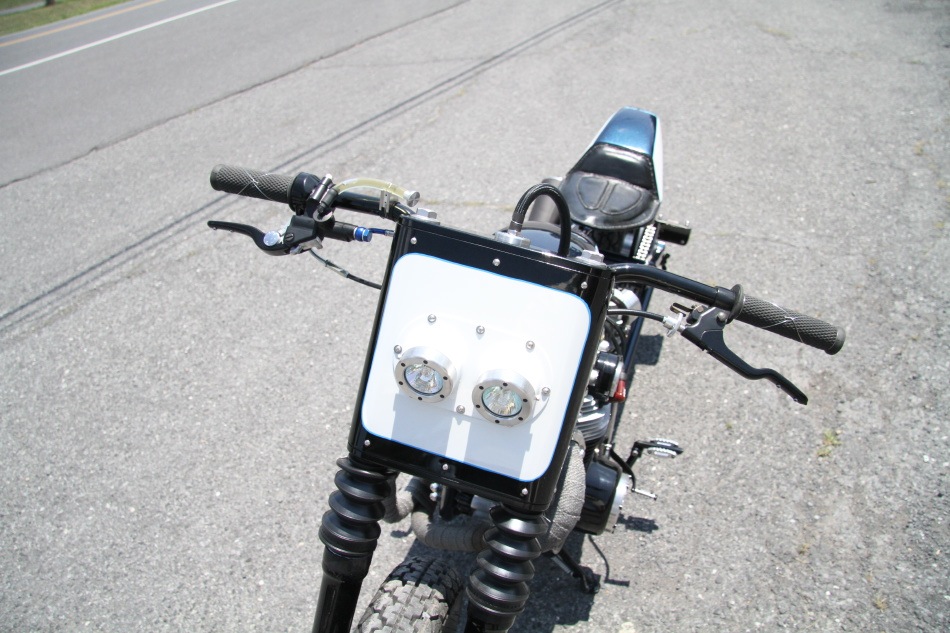 TR: B**chin’. Chris at Limeybikes did something similar on the ForD except the pump is off a snowmobile. You are located in “the hills of Virgina, where the history and traditions of the past still thrive.” You know the North won the war, right?

JC: Oh man! You’re the kind of of guy who likes to hit a bee hive with a rock to see if there are any bees, aren’t you? Ha ha! I have a question for you: How do you like your strong central government now?

This was of course what the war was all about, NOT slavery. Did you know they taught my first grade daughter that the whole thing was a slave issue? They failed to tell her that the Union had it’s own slaves, nor did they tell her that the Union kept their slaves for another three years after it was abolished in the South! So if you see my flag I hope you don’t immediately think racist redneck. The things the South fought against are the very things causing all the trouble in the US today. And just for the record, the Union won due to superior funding/logistics, not superior fighting skills. Ha!! 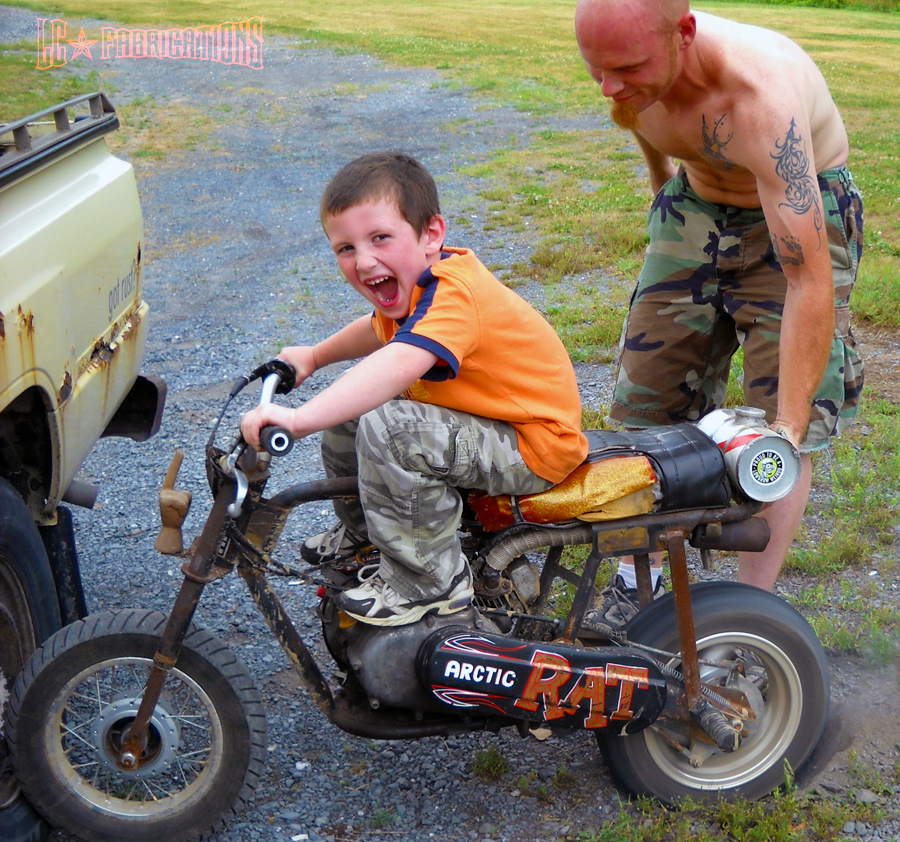 TR: I’m Libertarian. Regardless, slavery was an issue and had the South won, the USA would have accepted slavery for much longer. I’ve spoken with you, Jeremy. You love people and are not racist. Your arguments are valid but do not take into account how the Southern economy was run. Rich white guys. Black slaves. Let’s have this convo another time but we agree that it was more than slavery. It was economics, and much more than “rich white man and black slaves.”

The Civil War was the industrial revolution stomping it’s feet.

Do you have plans to make other metric bikes (Honda, Yamaha, Kawasaki, Suzuki) in the future? 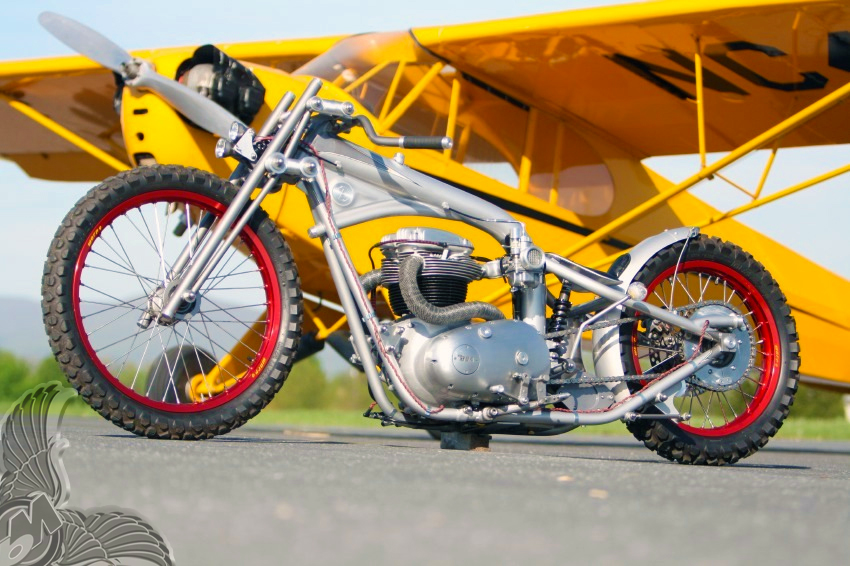 JC: I’d like to get my hands on one of those new Yamaha V-Max engines. I did just buy eight vintage Brit bikes, so some of those getting cut up! Oh, if anyone at new Norton reads this….. I NEED one of those! 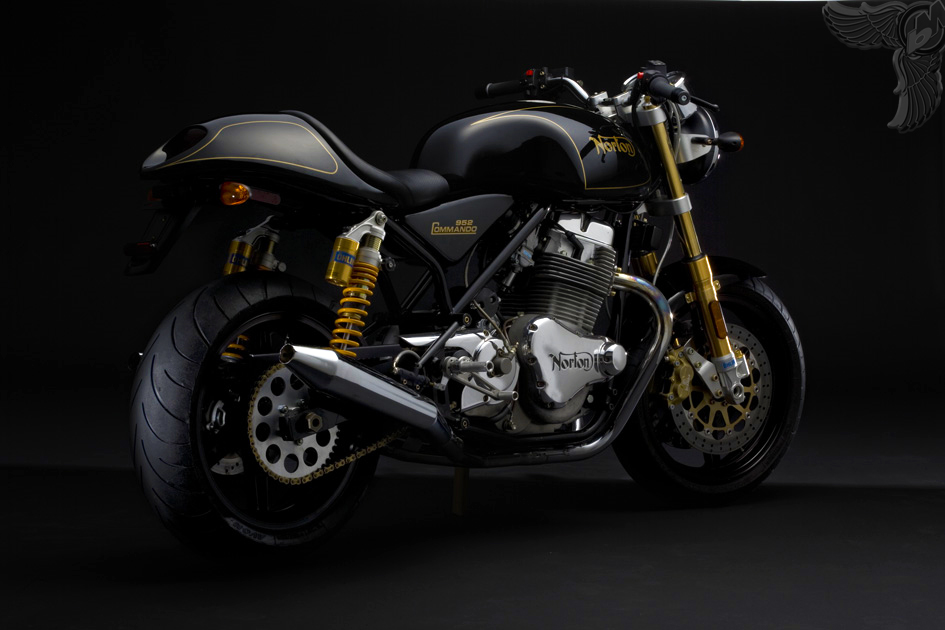 TR: Is there anything you’d like to say that hasn’t been said? Vote Independent? Eggplant sucks? Remedy for torn knuckles soaked in oil?

TR: Oh man. That’s so freaking wonderful. Congratulations on the love of an amazing woman.

JC: Thanks Trent, that was cool, so much nicer than the typical boring blah blah blah. Also, thanks for letting me release some steam. Feels good!

TR: Flattery will get you somewhere, Jeremy. Thanks for playing. We’ll be looking forward to your next killer creation while wishing you continued success.

Previous: vintage bike of the day and a new member
Next: the good news 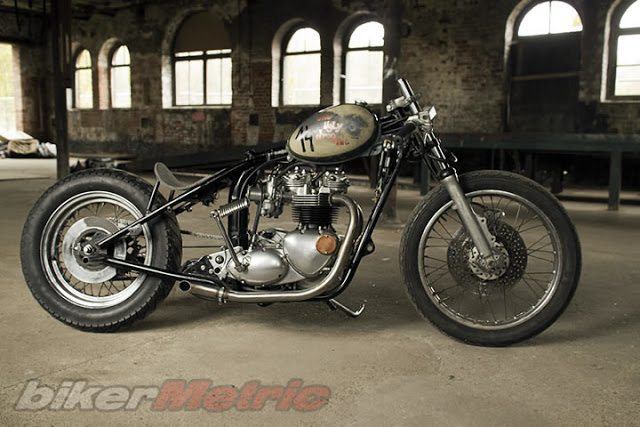