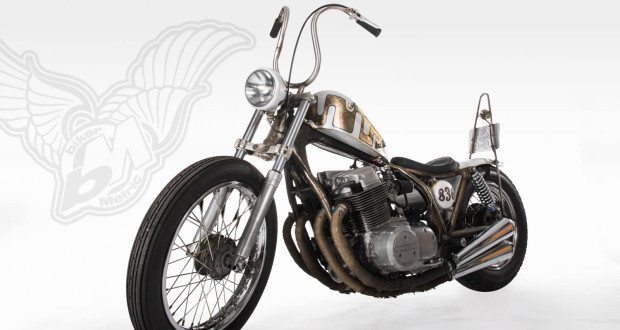 We got an email last week from Chris Dekker at Tin Can Customs. Chris calls it a Honda CB750 bobber with some neat tricks to it.

Dekker at Tin Can Customs did all of the work himself. There wasn’t a real plan to it from the get go, but everything turned out alright.

Here’s the story behind the bobber, in the builder’s own words:

The inspiration to this Honda CB750 bobber, well, I have to give credits to my girl. Her character is exactly what this bike is, ferocious and nimble. Next to that, my friends, music from the 70’s, and the works by Short Cut Choppers. I didn’t really look that far for inspiration, to be honest. 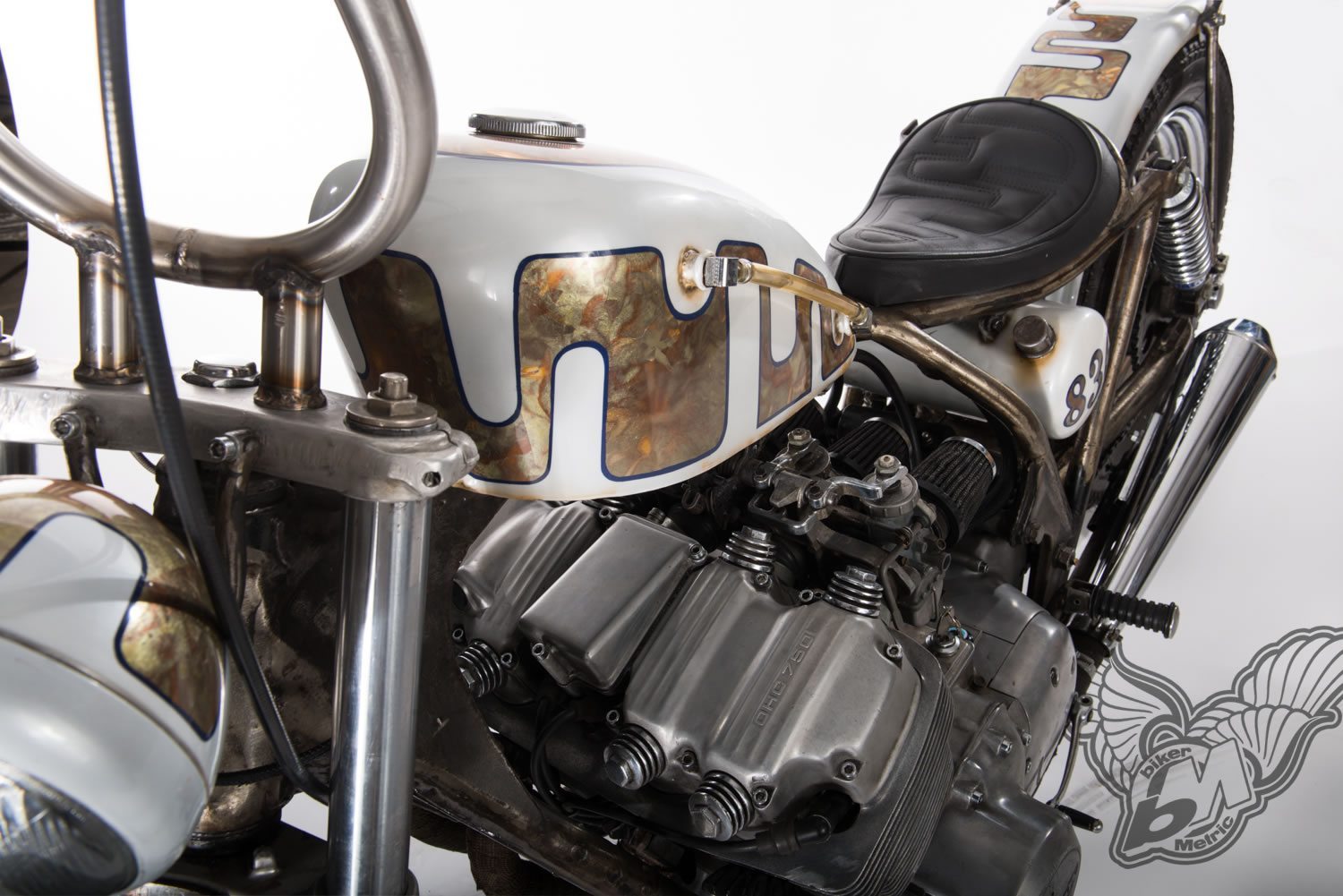 When I started the project it was basically just a frame. Bought that for 50 bucks, and it was all hacked up. The engine was a gift from a captain who had it lying around in parts in the hull of his ship. Had been there for 20 years, together with a lot of aftermarket 70’s stuff. That’s when I started my collection of rarities, haha. Scavenged and traded all the parts, and saw the build go as I went.

So the original goal was to build a motorcycle that was a challenge to me; I didn’t know how to weld when I started, but I knew I wanted to. Needed to, really. That learning curve was pretty steep. I overhauled the engine, put a big bore kit in, built a sandblasting cabinet to blast the engine, learned how to weld, etc. I guess the goal has been reached. On to the next. 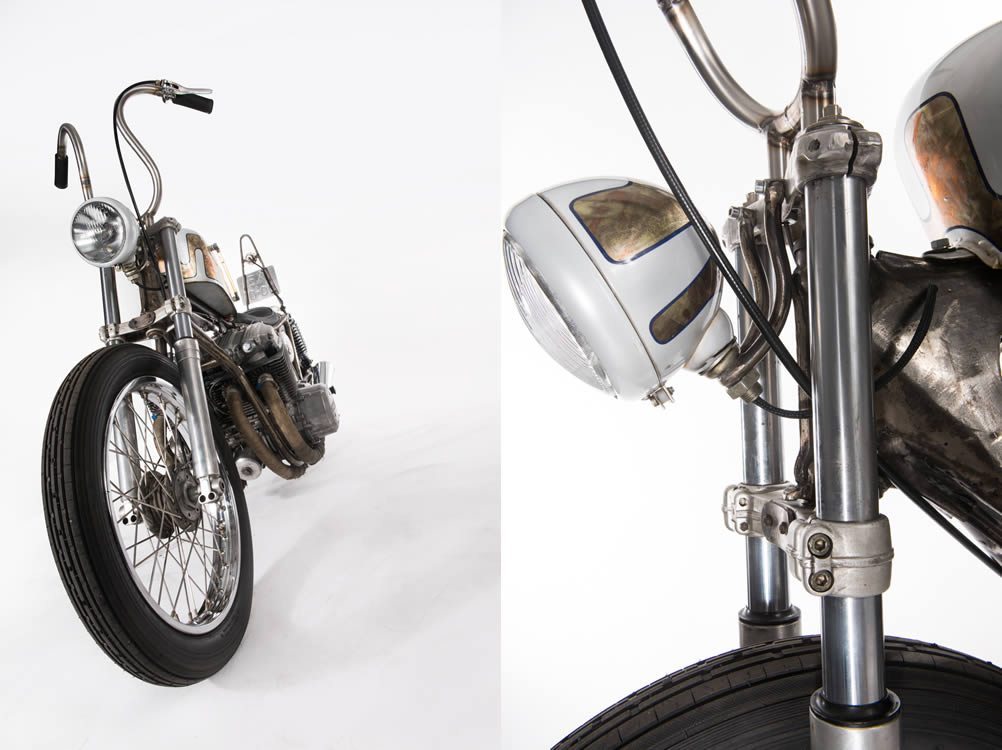 But the favorite is the handlebar. That was just the tank shape, but then inverted. And the seat shape is the tank but then flipped over. This is what I mean, these lines created themselves. I didn’t really draw it out up front. 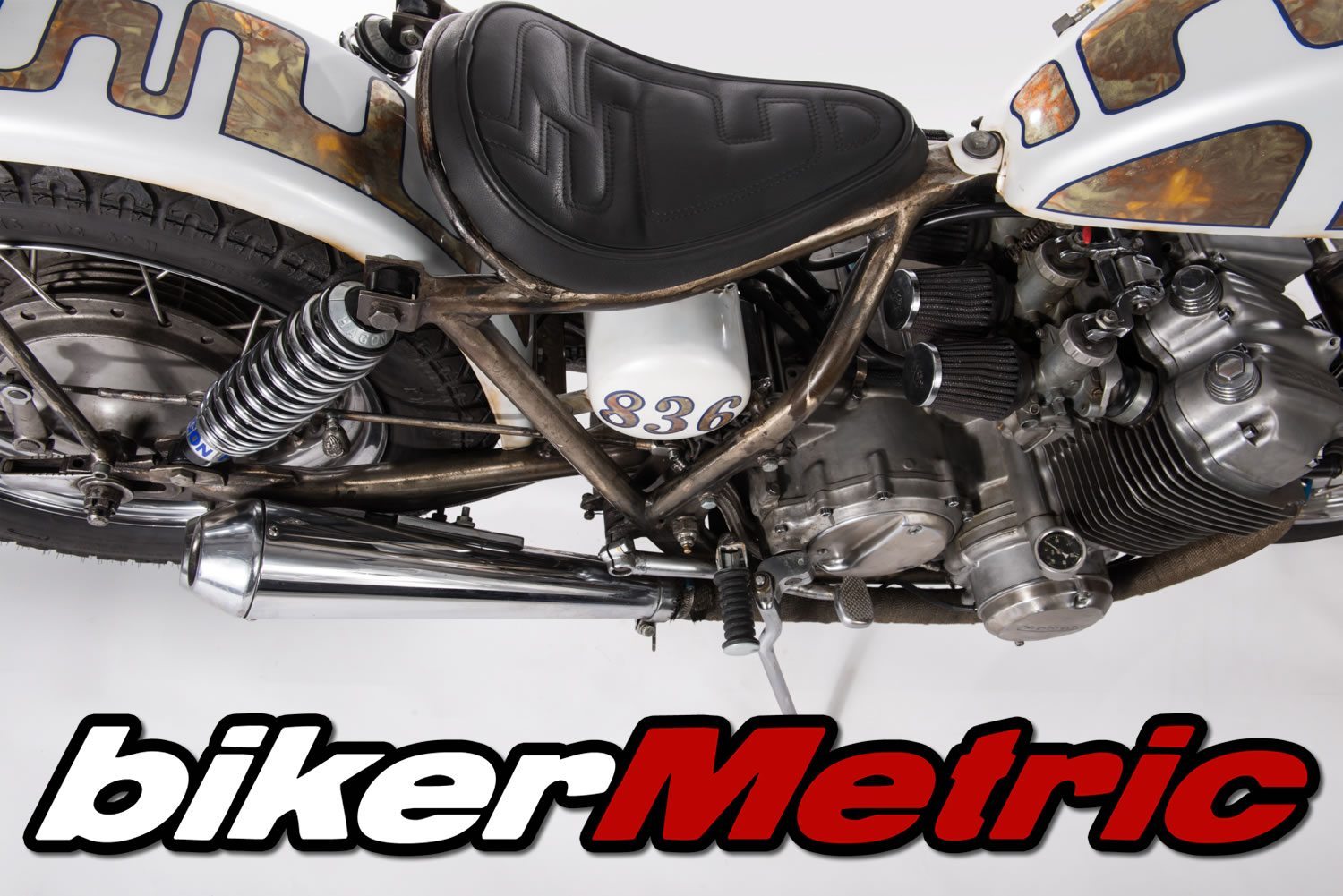 I guess my style is to work with old stuff. Old parts, with a background, a story. In a way to pay homage to the pioneers, in a way to educate the kids buying new stuff, in a way because I really like rust. That’s where the name of my shop came from: Tin Can Customs, kicking old rusty cans’ around as a kid, playing with garbage.

Words of wisdom. DON’T BEADBLAST THE ENGINE CASES SEPERATED. It takes ages to get it all out and then you’ll still be anxious for grit! And have fun! The CB750 is a solid base for a lot of things, just think out of the box. 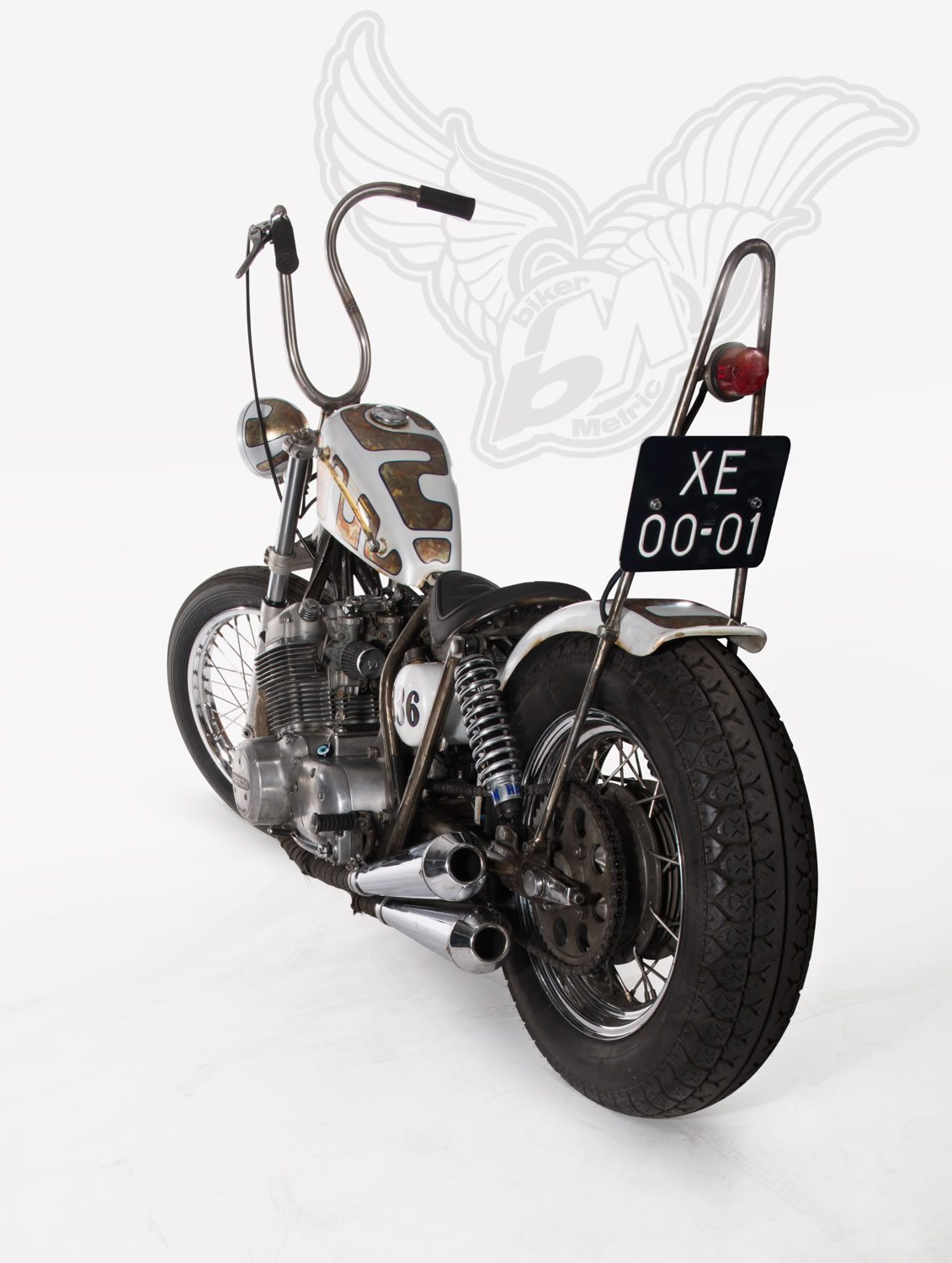 Selling it? I guess. It’s a love/hate, and I enjoy building more than riding. Didn’t expect that, but after finishing this one, I immediately moved on to the next. A hacked up CB550, hardtailed, inspired by the 30’s, with a brit front, a german tank, some sort of a boardtracker/bobber/chopper.

I definately want to give a shout out to Tjeerd of Short Cut Choppers. Thanks for your patience. My girl, my friends, the naysayers, the yeasayers. And Bastiaan van Ederen for the photo’s. Thanks! 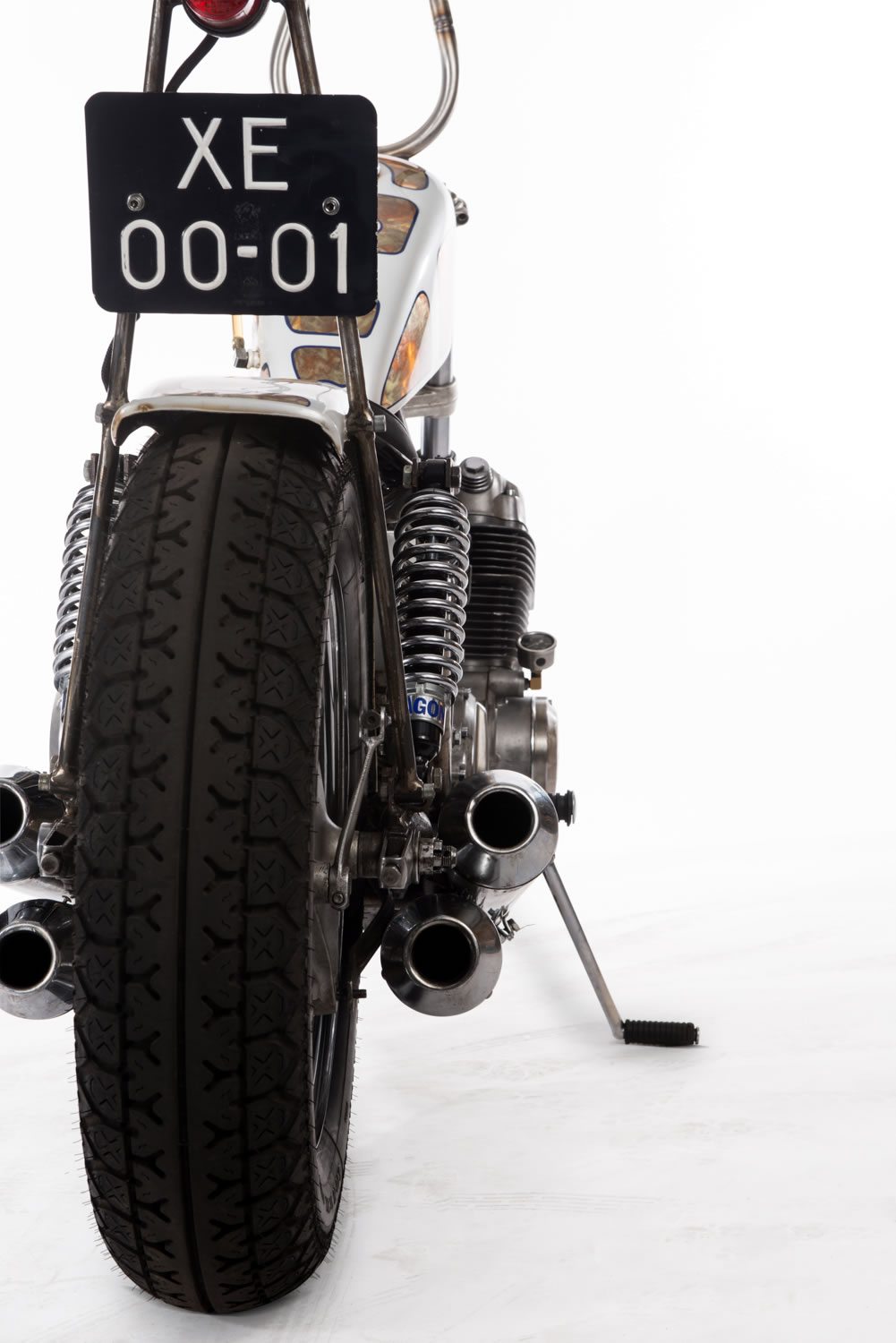 Thanks for coming out, Chris! Ride safe, brother!

Ladies and gents, be sure to check out Tin Can Customs.