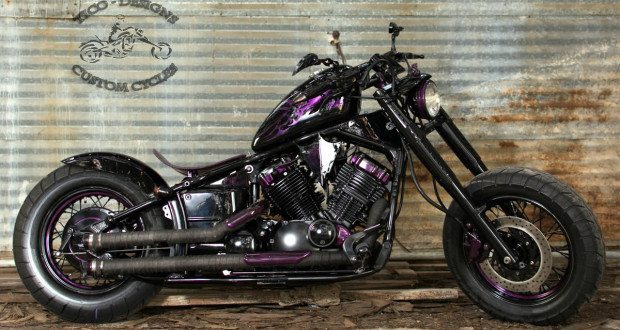 Mauricio Mora wasn’t born on the back of a motorcycle, but close enough. As a young Costa Rican Tico, Mauricio’s been around bikes forever. Sneaking out of the house to go the motorcycle shop across the street was a part of growing up. These days Costa Rica’s far off in the rear view mirrors, and Mauricio’s got a son of his own, who took a special part of this build. As soon as I took a look at what Mauricio sent me back in September of 2013 I could tell this guy had talent. He sent in teaser pics of his Yamaha V-Star project, leading to the building of Dead Man’s Hand: one **** of a first step into the custom motorcycle scene. Check out that build here. Beauty though she may be, Dead Man’s Hand is old news now. Tico Designs has a new baby.

bikerMetric: Tell us a little about the build. Is there a story here?
Tico Designs: Yes, this is another of those stories. I picked up this bike about 5 months ago from a guy who had it in his backyard under a tarp for over 4 years.
It did not look good but I negotiated a fair deal that made me ignore all of the rust that was building up on it. The guy had one of those fairy tale stories that was hard to believe and had taken some things apart but he had all of the paperwork for it and that was good for me. bM: Another V-Star 650 Classic bobber project. Are you starting to like these?
Tico Designs: This is a Vstar-650 Classic.
After my last project I really liked how this motorcycle offers a good canvas to start with and I was happy to find another V-Star, but this time I wanted to take it to a totally different level and did a lot more fabrication and modification to it.

bM: So just what exactly did you do?
Tico Designs: I guess the question should be what wasn’t done to it? That being said, here is a good try to enumerate the work done. Absolutely all work from Metal Fabrication to Leather work and Custom Paint was done by yours truly. bM: Purple Death? What up with that?
Tico Designs: LOL. That was my 4 year old son named it… After a mean Dragon out of one of his books called The Purple Death. I liked the idea and started to work from there. Five months later the Purple Death Bobber was born. bM: What’s next?
Tico Designs: I’ve done the bobber deal and I loved it but now I want to go to the other extreme and build a mean Bagger out of a regular metric. bM: Last chance on the microphone, what’s on your mind?
Tico Designs: Thanks to Adrian & bikerMetric for the chance to show the Purple Death… Love the job you do!

Also thanks to Oscar Campos Photography at www.oscarcampos.com for the great pictures.

If you want to see more pics of this and other bikes check out www.tico-designs.com

2014-06-25
Adrian S
Previous: this commercial gets me every time
Next: honda cb750 bobber by tin can customs