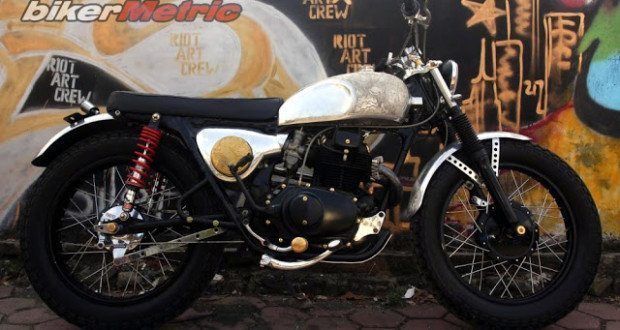 According the Google Translate when you first click over tothe Brodonolo Garage website, the makers of this ride, the homepage professestheir love is for the “Art of Motorcycle”. Regardless of the accuracy for thistranslation it’s clear that these guys have some serious talent. Honda’s littleCB200 isn’t a common starting platform for a custom build, especially here inNorth America. Its tiny 200cc mill powering this bike isn’t going to rip yourarms off as you accelerate through the gears, but this solid light-weight bikeproved to be a good starting point, if in the right hands. 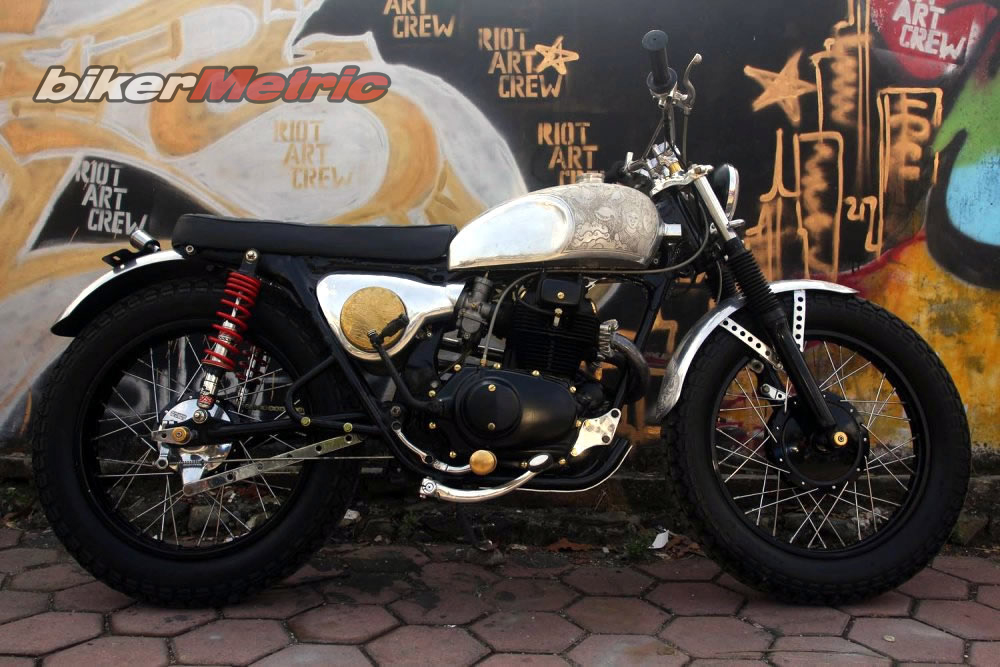 Completed in only a month the initial vision for this build,titled ‘Prengkald-Prengkold’, was to strip the bike down to its essentialswhile maintaining a sporty, classic and elegant look and ride. The originalframe was used with only a few chops and modifications here and there to achievethe intended design. 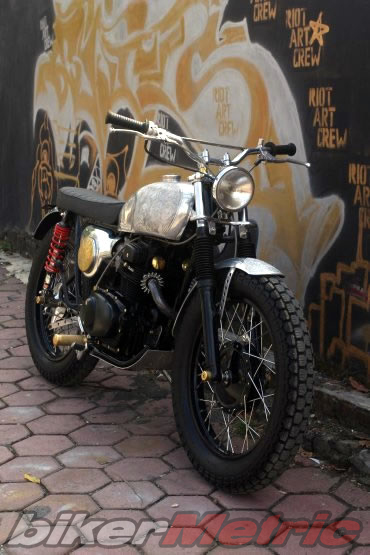 With the frame complete the fun began. The majority of theengine and wheels were given a liberal dose of black paint, the stock pipeswere ditched for an awesome set of high pipes that were shorter than stock.Although the front fork-boots were retained (along with what looks to be theoriginal rubber from the kick-start lever) almost everything else was modified.
Chrome dual rear suspension springs were replaced by aftermarket-looking red coils,while the clunky stock taillight/license plate mounting bracket was binned inexchange for a tidy brake light and small plate holder. 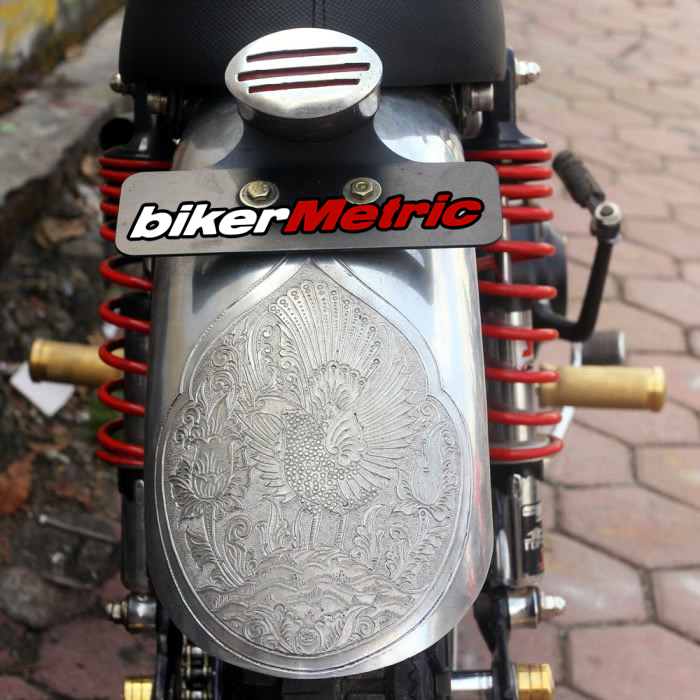 Next the tank, fenders and bodywork were all fabricated outof aluminum. Starting from the front; the front fender was cropped and heavilyengraved while the mounting brackets were modified and repositioned achieving amore symmetrical look. The larger stock headlight was replaced by a shallower and slightly smaller diameter headlight in keeping with the minimalist theme.

Finally we come to my favorite part – the gas tank. The almost square original tank wasreplaced by a much more curvaceous one which was fitted with a custom gas cap.Beautiful and ornate engravings adorn most of the tank depicting images ofharmony between humans, plants and animals. Both side panels are also aluminum and are also heavily engraved, which was an amazing alternative to an intricate paint scheme. Lastly, the rear fender was also cropped and given a healthy helping of artistic engraving over the most rear portion of its metal surface. 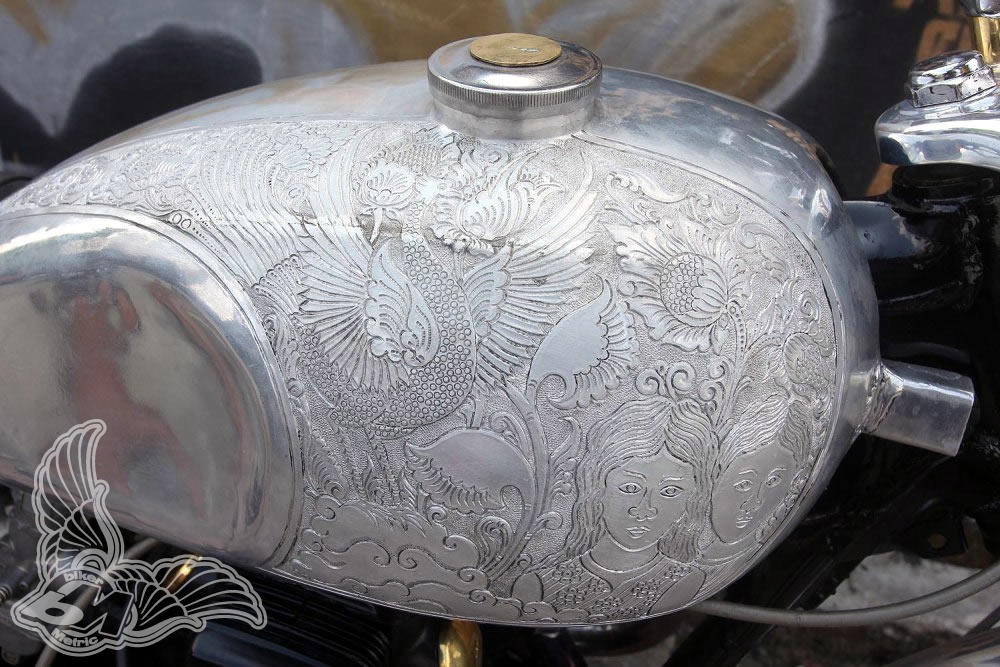 To achieve the comfortable street-tracker-style ridingposition the OEM seat was removed and a slimmer, yet still comfortable looking,aftermarket unit took its place. MX bars replaced the stock one, and barraisers were added for a straight-armed stance. The bike now rides on muchthicker rubber, which we assume would add to its comfort without noticeablysacrificing handling. 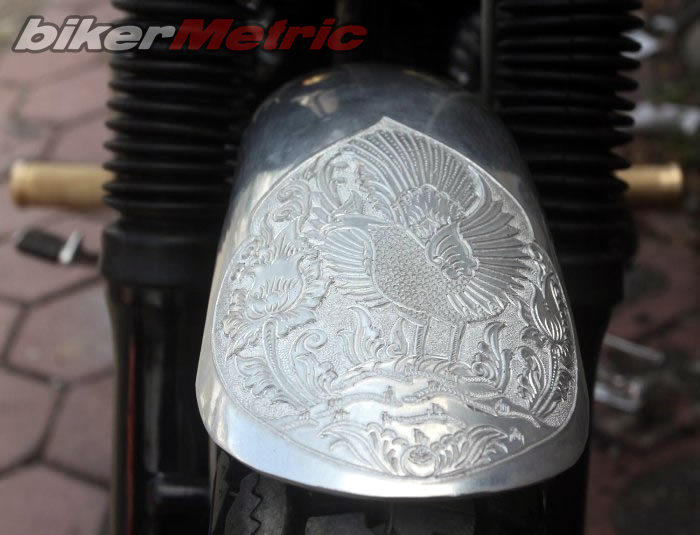 With the build nearing completion and things shaping-up wellthe CB was given bits of gold here and there. All over actually. The gas cap,foot pegs, engine bolts and side panels all received the gold treatment.Unfortunately we were never told if the gold bits were real or, if not, whatthe material actual is. 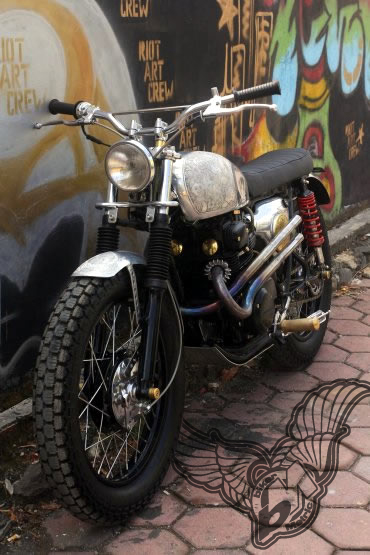 The CB200 was only in production from ’73 to ’76 adding to the exclusivity of this ride. The CB200A (or ‘K’, depending on which area ofthe world you’re in) was the model name given to the ’73 – ’74 bikes which wasfitted with a drum front and back brake. Then in ’75 and ’76 the bike was then given the code CB200B (or T) of which the most noticeable change was that the front drum brake was replaced by a cable operated disc.
What’s interesting is that this is a 1976 model fitted with a drum brake. After a little internetsurfing we read that the disc’s cable operation was loved by some but hated by just as many – I guess we now know which side of the argument the good peoplefrom Brodonolo Garage are on. 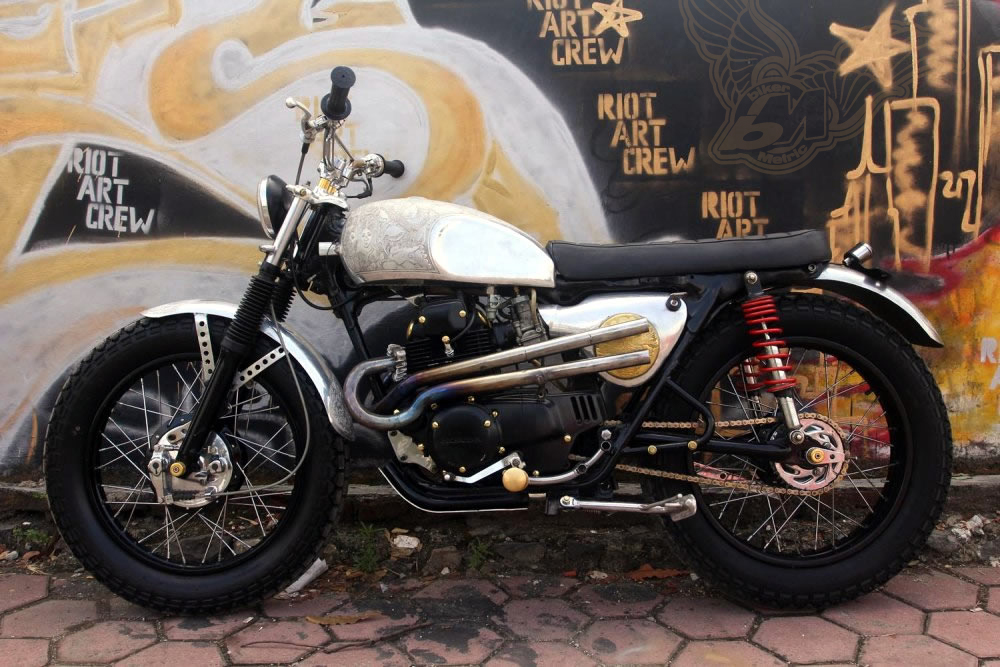 Opinions aside this bike is a great example of what can bedone with a little time and an artistic eye.

Previous: yamaha v-star 650 bobber by tail end customs
Next: borile b500 ricki and b450 scrambler