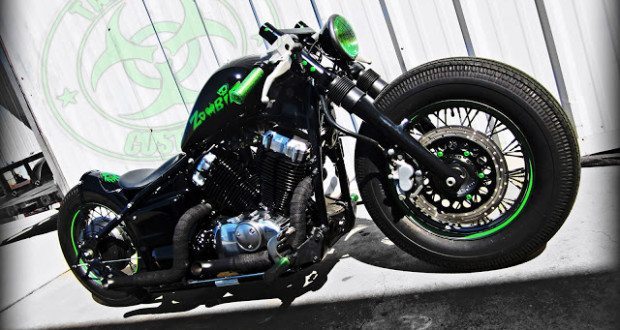 As promised, here is another one of Josh’s builds – Zombie! Now although any newcomers to bikerMetric might be drooling over this latest build from Tail End Customs, the more regular visitors are likely to have a double-take.

spoke wheels wrapped with old-school rubber, which gives them the perfect amount of simplicity at the wheels so that that big and bold V-twin can be the center of attention. Another similarity which I dig is the mix of disc and drum brakes. Both bikes are equipped with a drilled rotor up front, while a drum brake is given the stopping duties for the rear wheel. Each bike also features a solo seat and a bobber-style rear fender. Another fine piece of custom metal that both motorcycles share is the speedholed fork tube covers. The similarities begin to fade there. In Josh’s words:

“This one was a stocker I picked up and wanted to do something a little different than my normal. I decided on a fat, low, and mean look.” 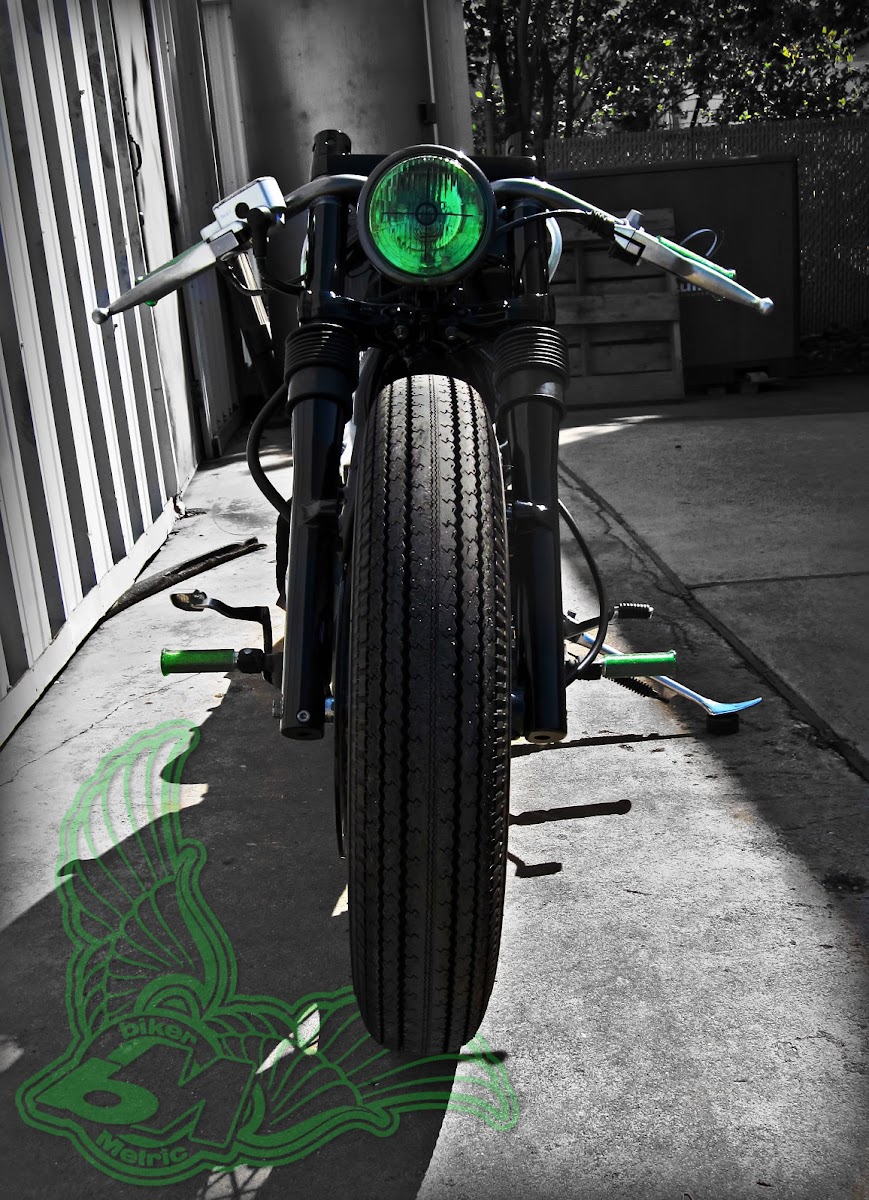 The mean and low look was achieved by mounting clip-on bars that droop down low, a meaty front tire, a lower and wider tank and tons of glossy blacked bits. To further emphasize the bikes low profile it was slammed front and back. The Zombie theme was achieved by adding lime green foot pegs, grips, wheel trim and even a lime green brake line and headlight lens. 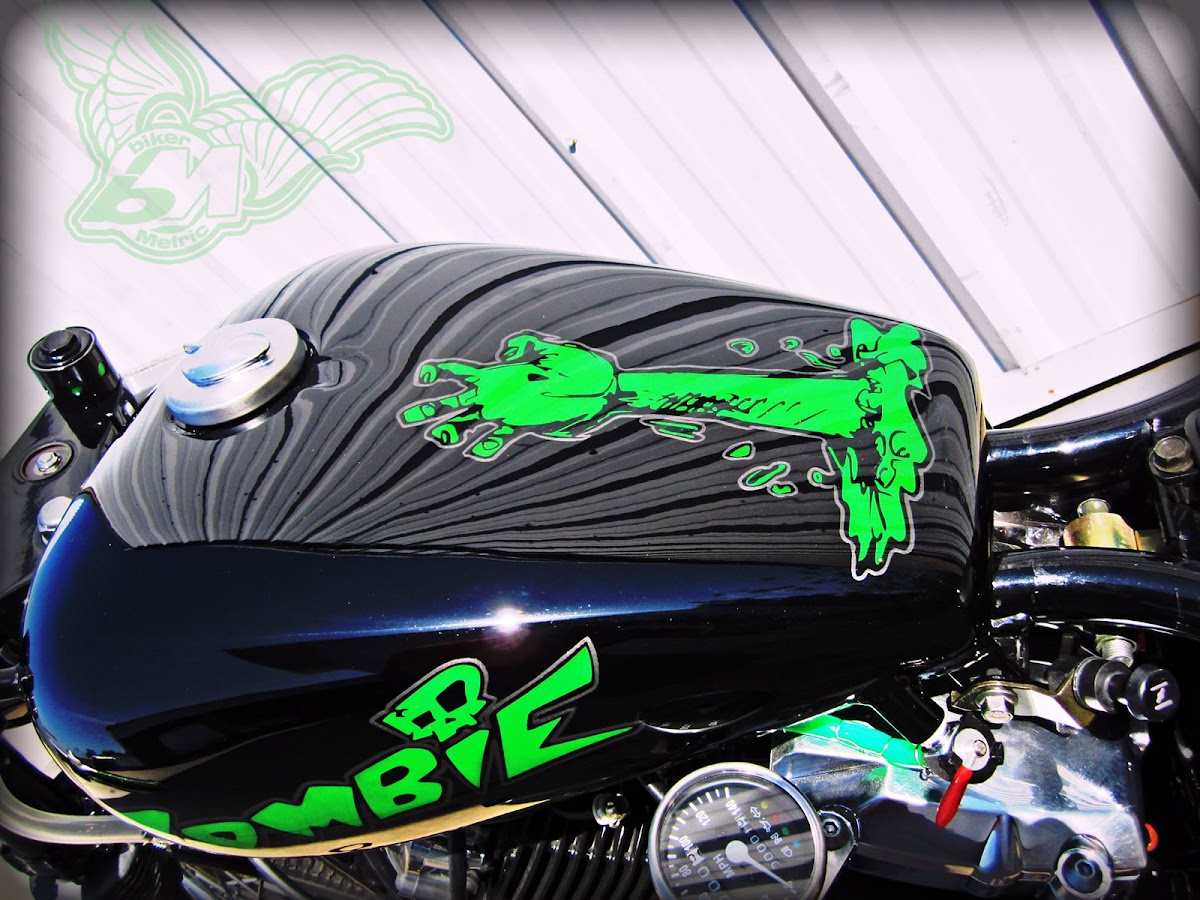 Now for tank I had mentioned earlier Josh ditched the Sportster tank sourced for the previous build and used a Honda Rebel tank this time around. Adding his personal touch Josh customized it by chopping of the bottom portion and fabricating his own. Of course Tail End Customs’ own Power Piston tail light was used as the brake light and license plate holder and was customized with lime green in the piston ring grooves.

Throaty pipes were custom created for this Yamaha power plant and wrapped with black exhaust wrap to maintain the sinister appearance. And man does this bike sound mean! In fact, you can hear it yourself by hearing it run in the video below. 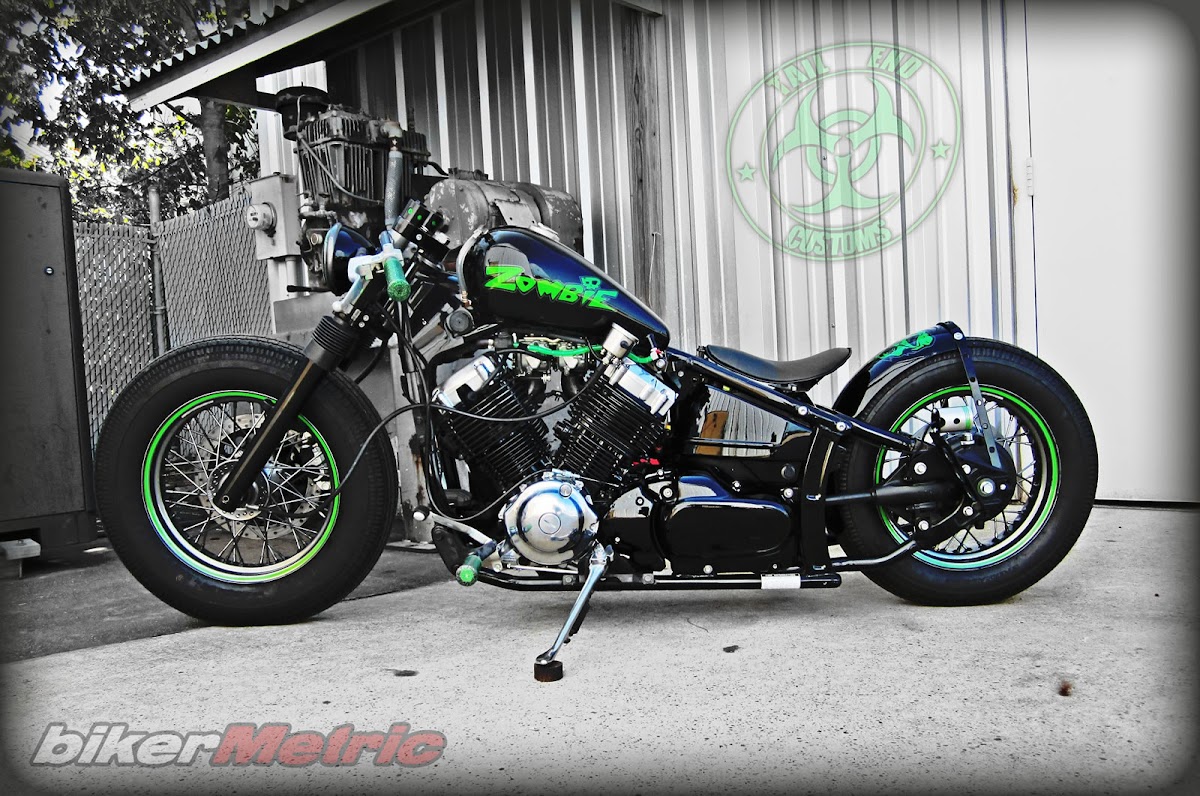 Overall I think Josh accomplished exactly what he had hopped when he built this bike fit for the undead. Personally my favorite part would have to be the rudimentary gas gauge fabricated by mounting a section of clear tubing vertically on the tank. Awesome build Josh, we can’t wait to see what rolls out of your shop next.