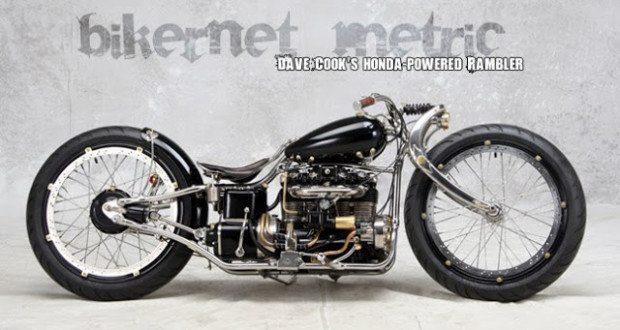 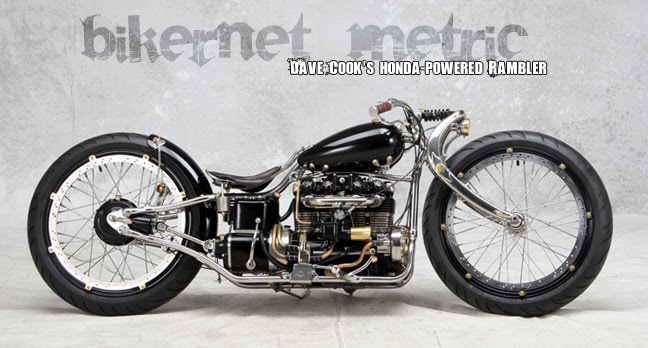 This bike is one of my all-time favorite custom motorcycles. It is called the Rambler and it was built by Dave Cook of Cook Customs. In August, Milwaukee-based Dave became the first American to win the AMD World Championship of Bike Building in Sturgis. It took him three years to win after deciding it was his goal. That’s decent focus and determination. It’s obvious why he won.

First, his mechanical skills are surpassed by none. The motor is a highly-modified Honda CB550 inline-four, or what Dave calls a “550 International.” It’s an amazing mix of stock metric and one-off fabricated components made in-house:

1) The CB550 powerplant has radically reworked cases to allow the engine to be mounted longitudinally instead of transversely.
2) The oil tank and oil regulator are custom-made by CC.
3) The timing assembly is a one-off design.
4) The bell housing and clutch assembly were hand-made.
5) The transmission housing is an old three-speed BMW gear case. Dave managed to massage a BMW R75 four-speed gear set inside.
6) The shaft drive is adapted from a Yamaha Virago. 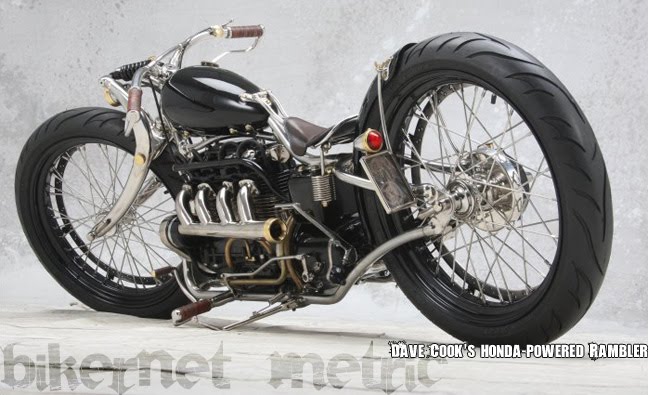 And that’s just the engine, transmission and drive. It’s there that the Japanese and German parts end. For the rest of the bike, Dave and his two-man crew built everything.

The wishbone frame is a one-of-a-kind, like the swooping front end. Dave calls it a “banana girder extreme.” Indeed. The mounts for fenders and tanks are specific to this bike only. Same with the saddle.

All of this together makes for an incredible design. The perimeter rotors open the wheels up for a look that makes the bike look lighter and the calipers are hidden so well they can barely be spotted in these photos. The matching 21″ tires and wheels give the Rambler a symmetry that exudes grace when mixed with the minimalist shaft drive. There are no chains, belts or visible gears.

The copper tubing runs tightly over the mechanics of the Rambler. The tubes are offset on black with small brass elements repeating on chrome with the exhaust endcap, headlamp, brake light, forks, rotor, handlebar, and tank mount parts. Even the fender struts have brass wingnuts. This kind of accent throughout the bike adds another element that sets it off from most others.

The entire motorbike truly is a rolling piece of art. Is this what they call “steampunk?” I believe it is, whether Dave Cook meant for it to be or not. This is a motorcycle Jules Verne would have written about. If only he only could have envisioned the motor being made in Japan. 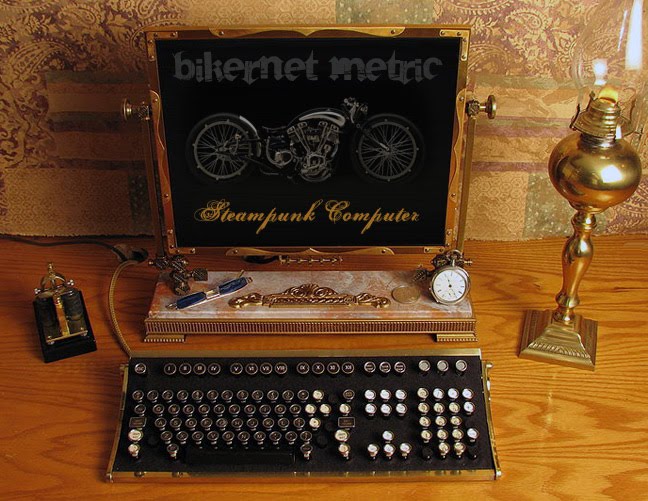 The short and wide exhaust system looks like an ear-jammer and the longitudinal engine placement is reminiscent of a Glenn Curtiss and other motorcycle engines from a century ago. The minimalist wiring adds to the clean look of the bike, even with so much exposed, it’s tight. Literally.

To top it all off, it’s black. Black rims, black tanks, black motor, black transmission. That’s my favorite color and to me, motorcycles come in one color or none at all. 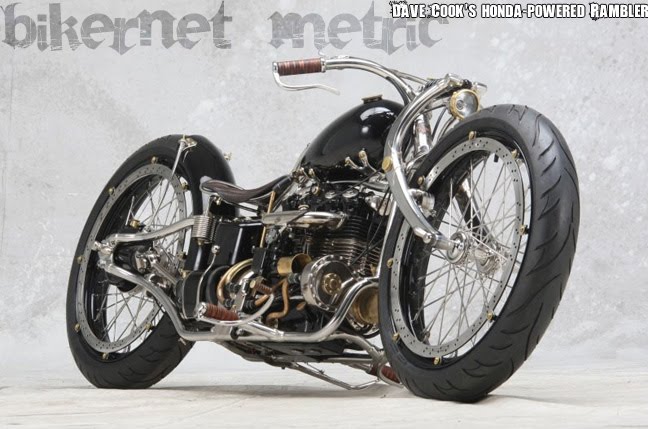