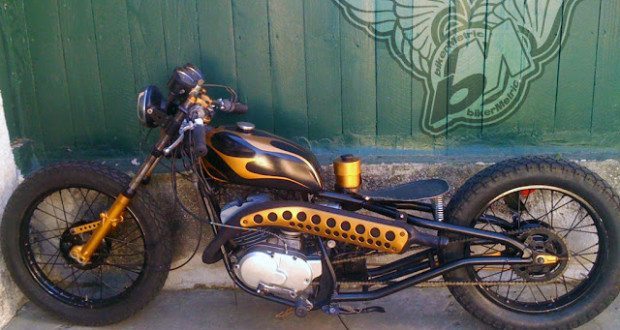 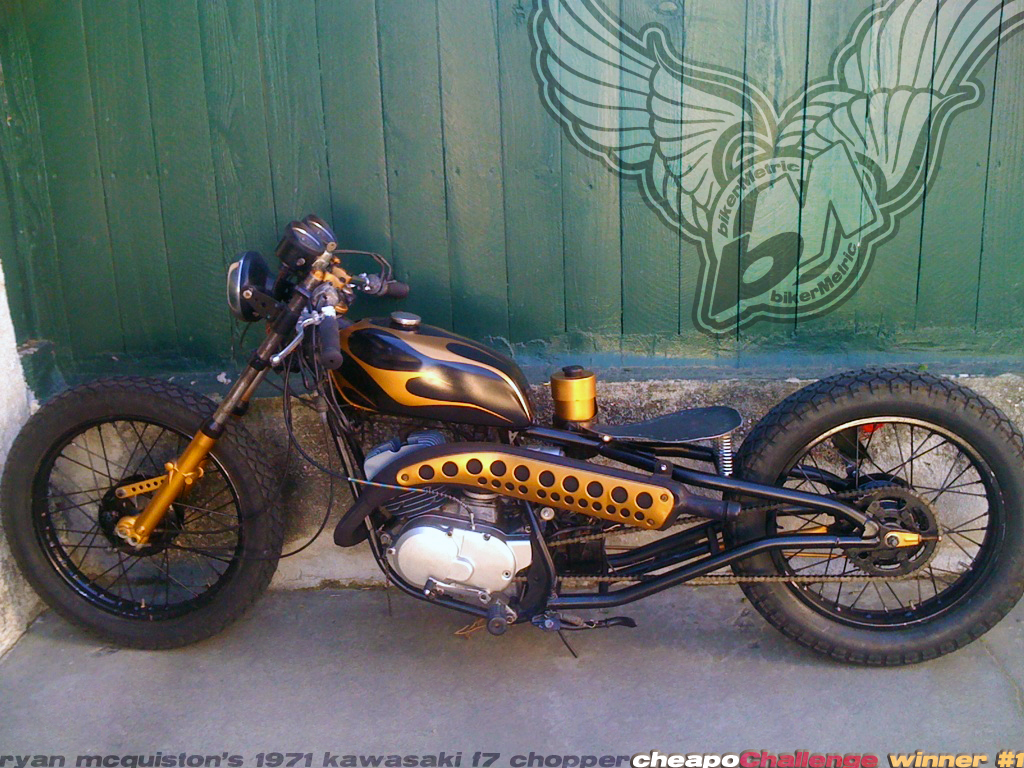 the f7 was a two-stroke 175cc “dual-purpose” motorcycle. that’s what they called motoretards back then. that’s the word, right? motoretard? the kind that go on the road and in the dirt? yeah. that’s right. wikipedia says so.

there are three reasons why ryan’s bike won the first bikerMetric cheapoChallenge: 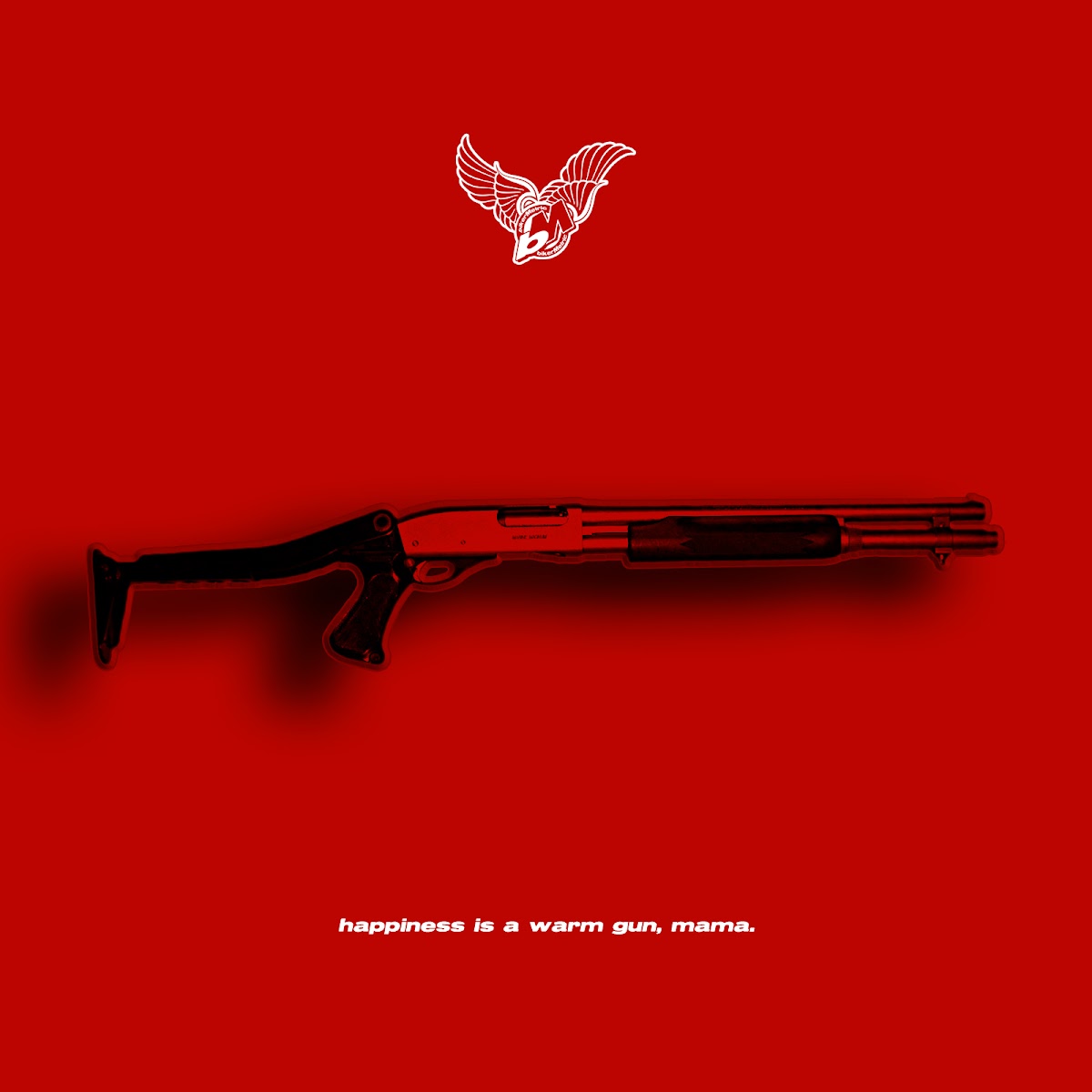 3. he was the only one to send me the required information. 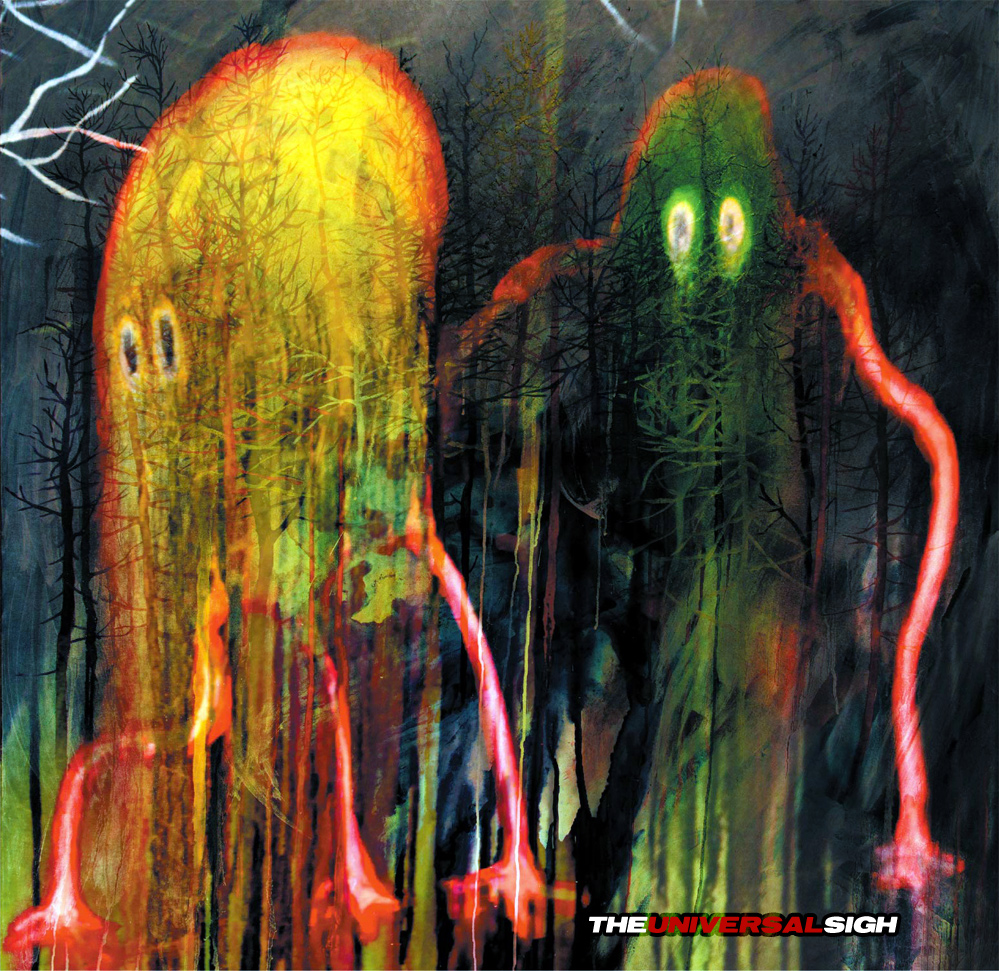 ryan had no idea this lump of coal would turn into a diamond, but he figured since the build was going to show people how they can work with a tight budget to make something anybody can be proud too ride, he decided to buy this “vintage piece of sh*t” that did not run. it had compression and deep inside, a spark. 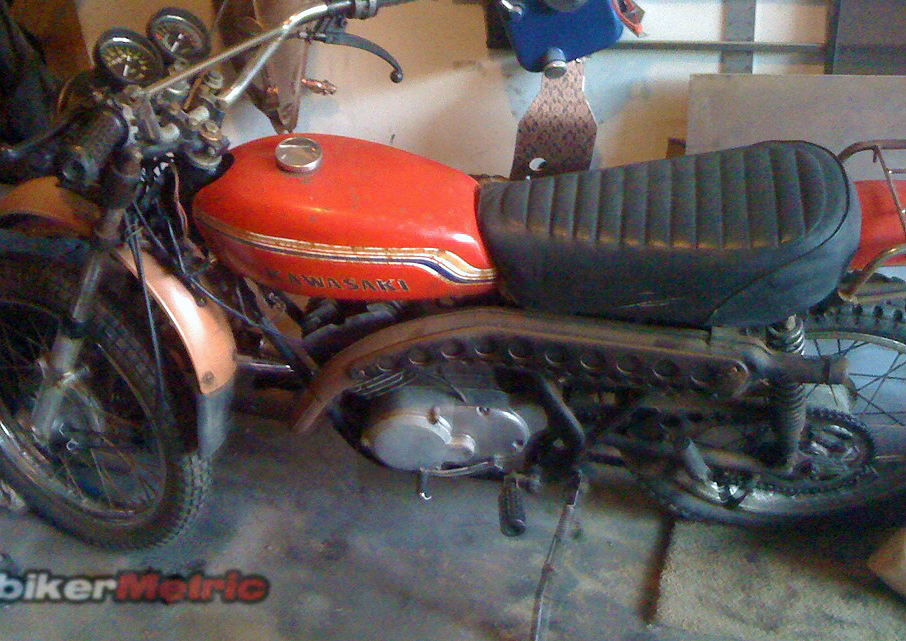 once ryan got it home, he noticed it has some cool characteristics such as the internal carburetor and how the forks had an extra axle hole so he could easily change the rake on the front end. realizing these things, he “got more pumped” to start tearing it down and began chopping the rear end off. 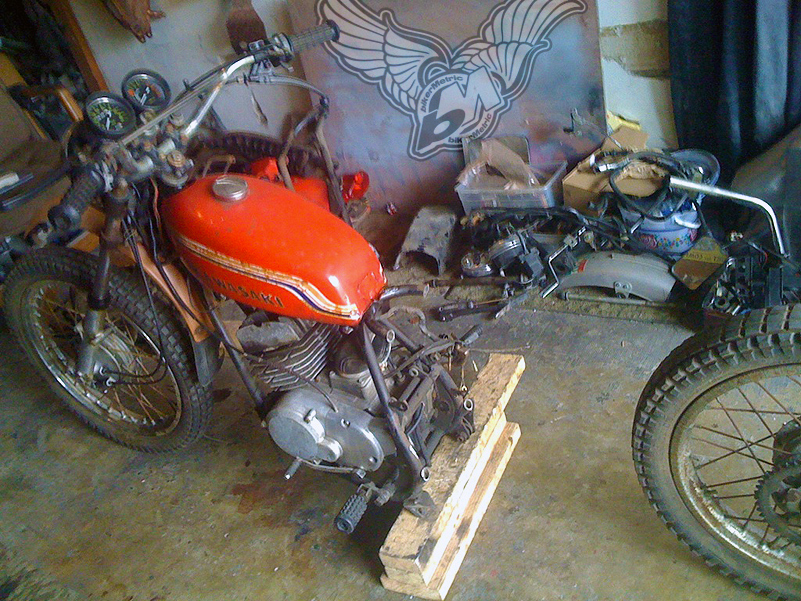 he then took some measurements and used the axle plates from the swing arm for his new hardtail. 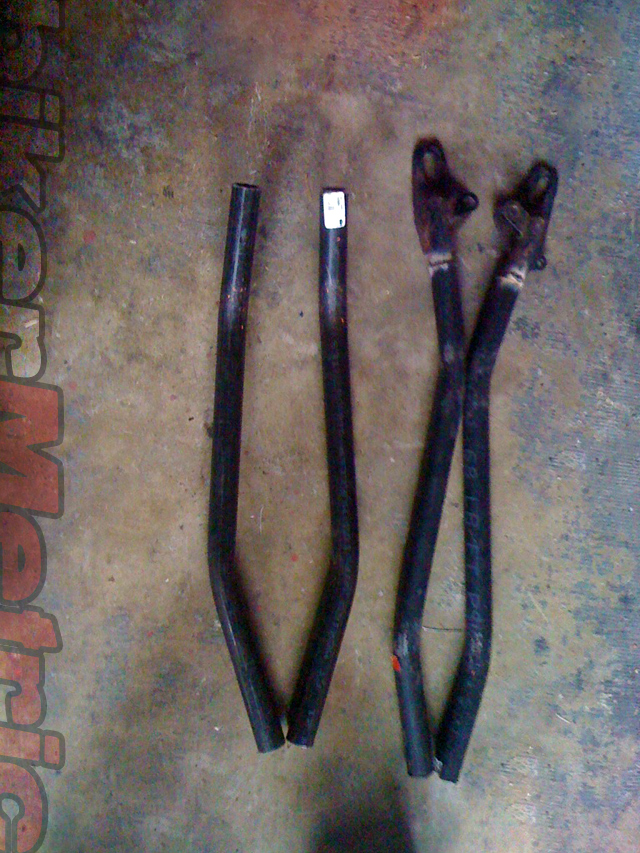 after taking measurements to decide how low he wanted the chopper and what rake it would possess, ryan slugged the loop of the f7 frame, attached the hardtail and started welding. 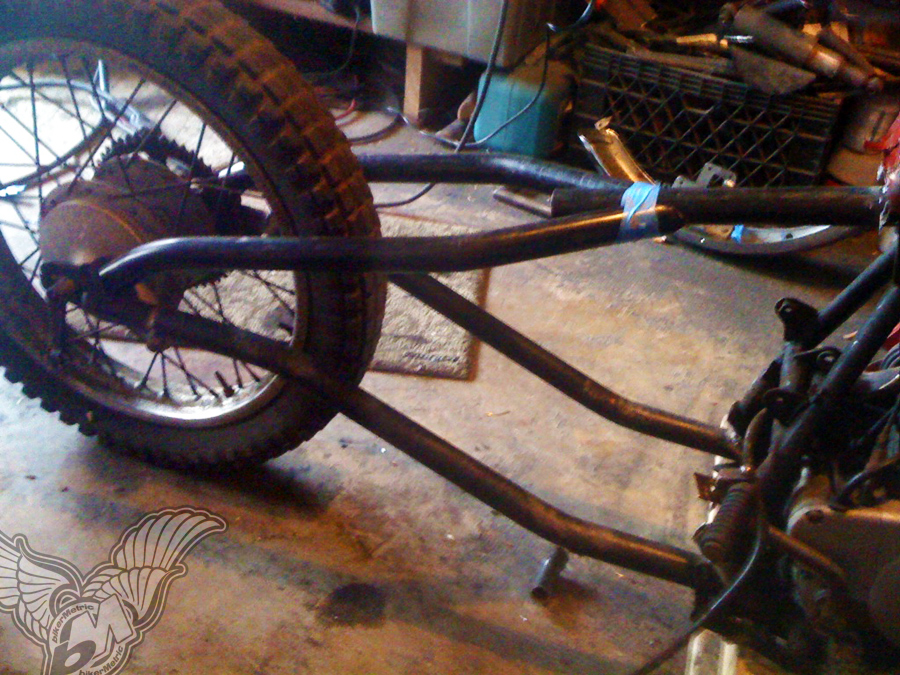 with the frame welded together, he cleaned up his welds and commenced “operation slimbob.” 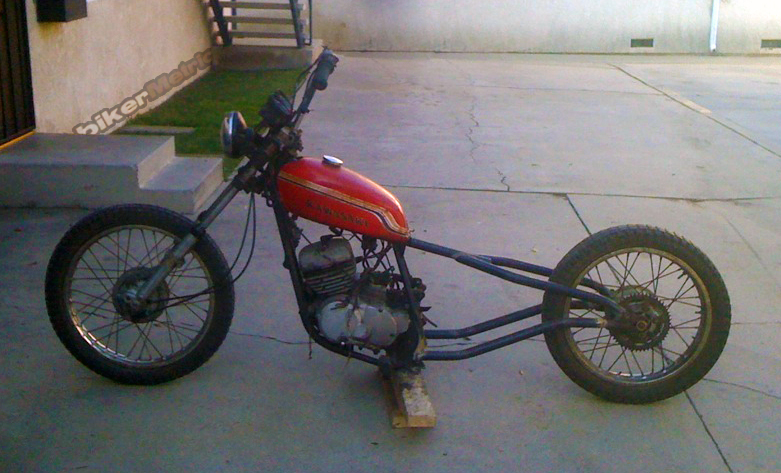 the bike was disassembled and he began to paint slimbob with high heat engine paint in aresol cans, or as the beer-swilling garage-built custom metric motorcycle industry calls it, “a rattle can paint job.” 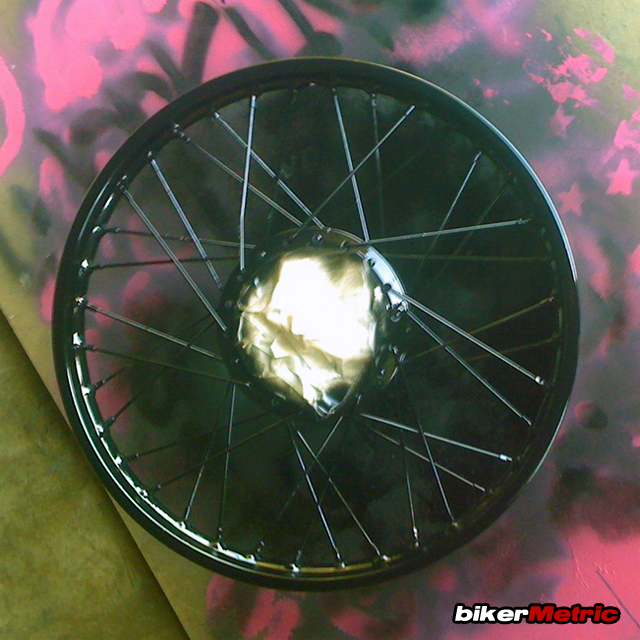 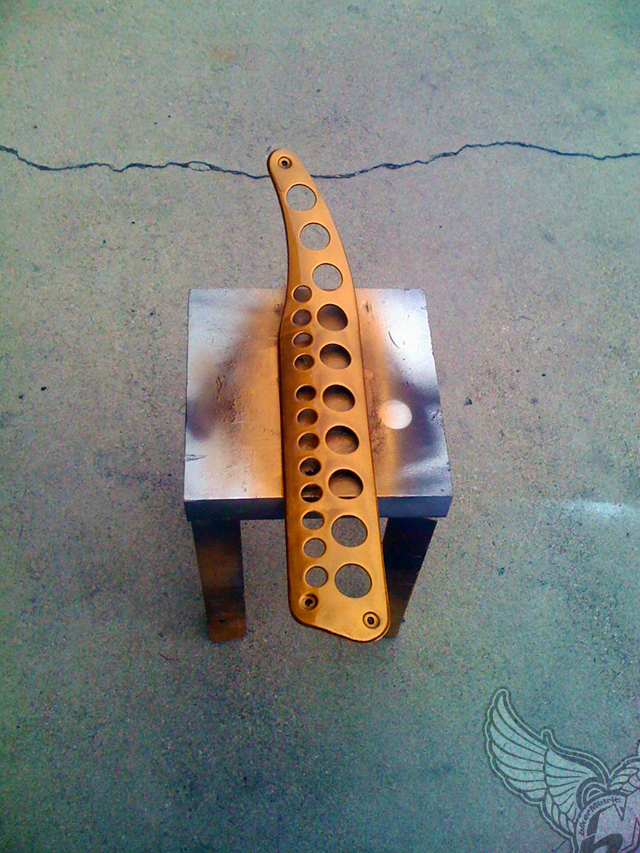 after getting the motor out of bike, ryan knew he had a clutch issue so he took it apart and got it moving again. after cleaning the motor, he slapped on more spray can paint, making a nice satin finish. 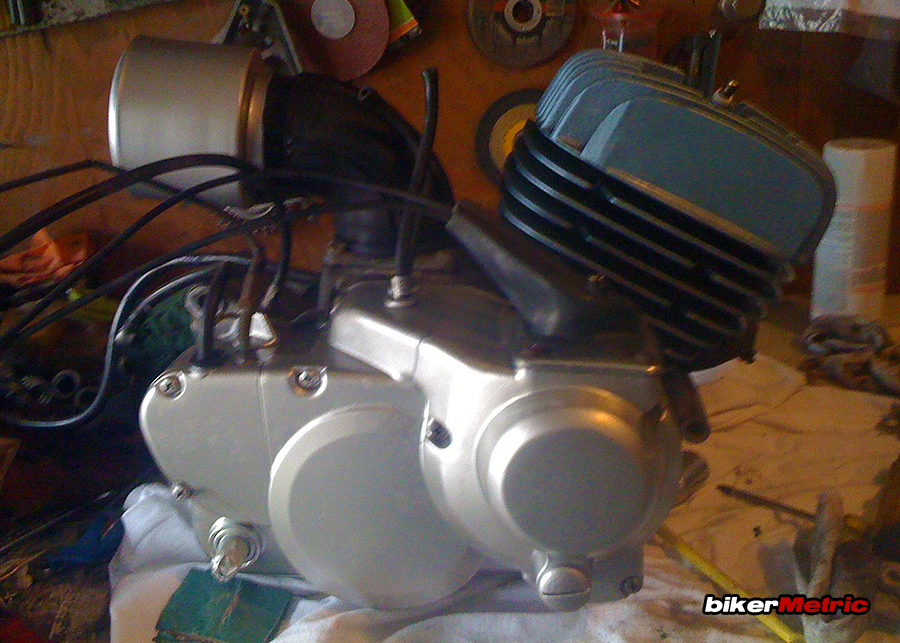 now it was time to visit one of the oldest bike shops in the united states, century motorcycle shop in san pedro. ryan spoke with the owner, tim, who hooked him up with some goodies for slim at a more-than-fair price. 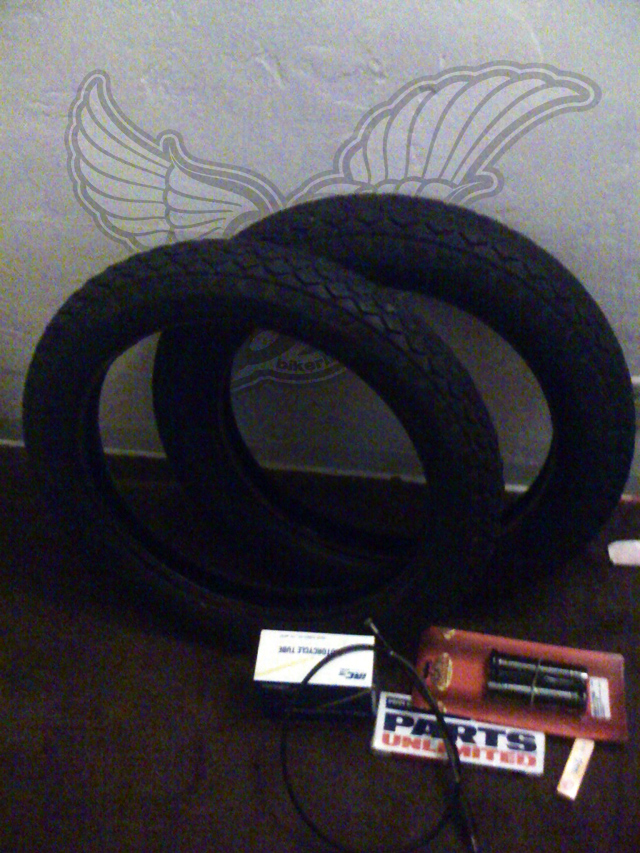 an oil tank was needed and since he was on a budget and the original tank “looked like sh*t,” ryan got creative and decided to build one. because the bike is a two stroke and didn’t need an oil return, he used some pvc pipe to fabricate a couple of endcaps and grabbed some fittings, a large oil hose and a clean $1.25 oil cap from the auto supply store. he glued it all together and bam! he had a one-of-a-kind oil tank that “looks like it cost a arm and a leg.” 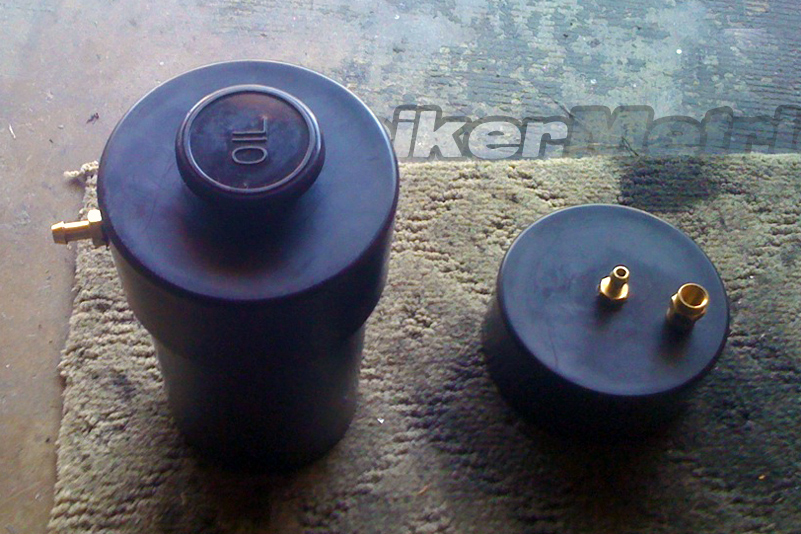 to mount the tank, ryan used the existing chain guard from the bike and made it work by “hitting it with a hammer for ten minutes.”

at this point slimbob was starting to come alive. ryan had originally decided to leave the original gas tank unmolested since it had a “cool vintage look,” but he had a change of heart and stripped it down, primed it, and with his rattle can mastery, created the gold-on-black flame job you see here. 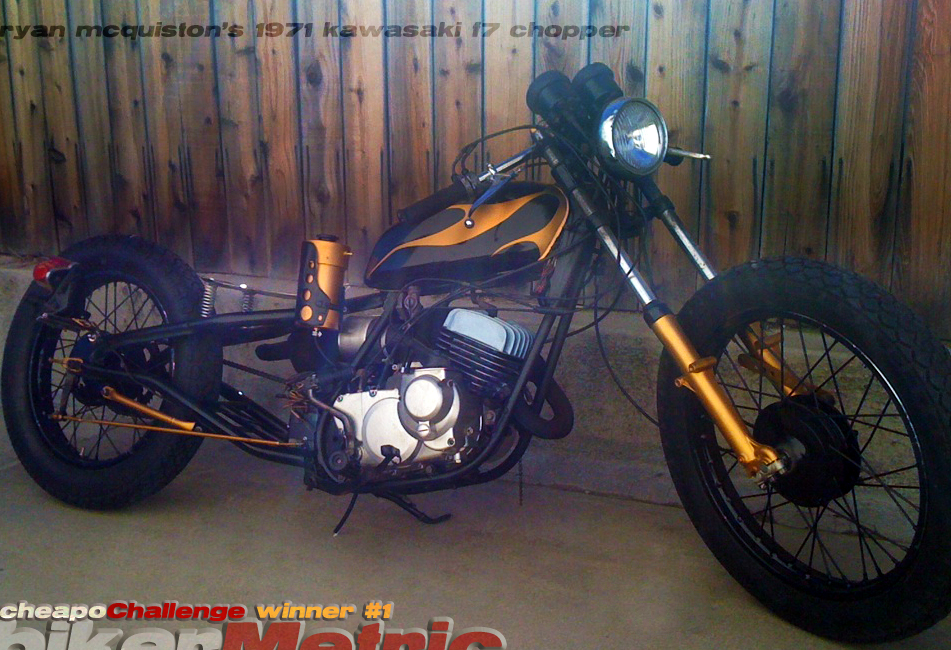 one case of bud, one full bottle of tequila, and one-half bottle of vodka (mixed with rockstar energy bilge) was consumed by ryan’s gullet during the build. arr!

best of all, the entire build – including the bike and beer purchases – came in under $650!

here are videos to prove how cheap metric custom choppers and bobbers can be rideable machines, even if built by some drunken poser in hollywood.

thanks, ryan! your stickers will be in the mail soon, maybe with a brand new “FREEDOM OR DEATH” bikerMetric t-shirt…

check out the rules for the cheapoChallenge here to enter and gain fame, glory, and free stickers, mofos. 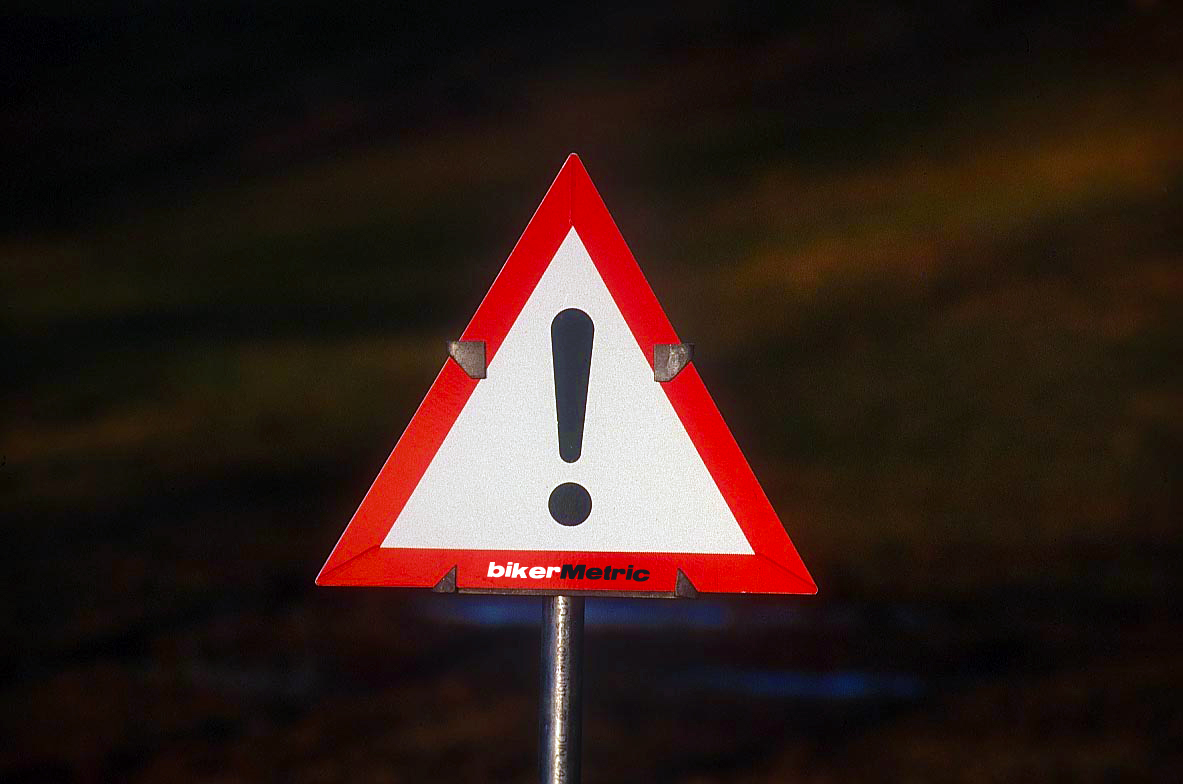