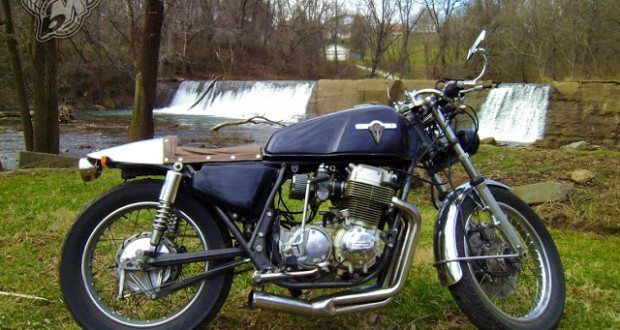 bikerMetric supporter and reader TOOLS1 helped this reader ride post happen. he knew the builder of this bike, eric eller, but the dude didn’t think his bike was worthy. cue wayne and garth. tools convinced eric his bike was indeed worthy, and photographs were taken. here are eric’s words about the build: 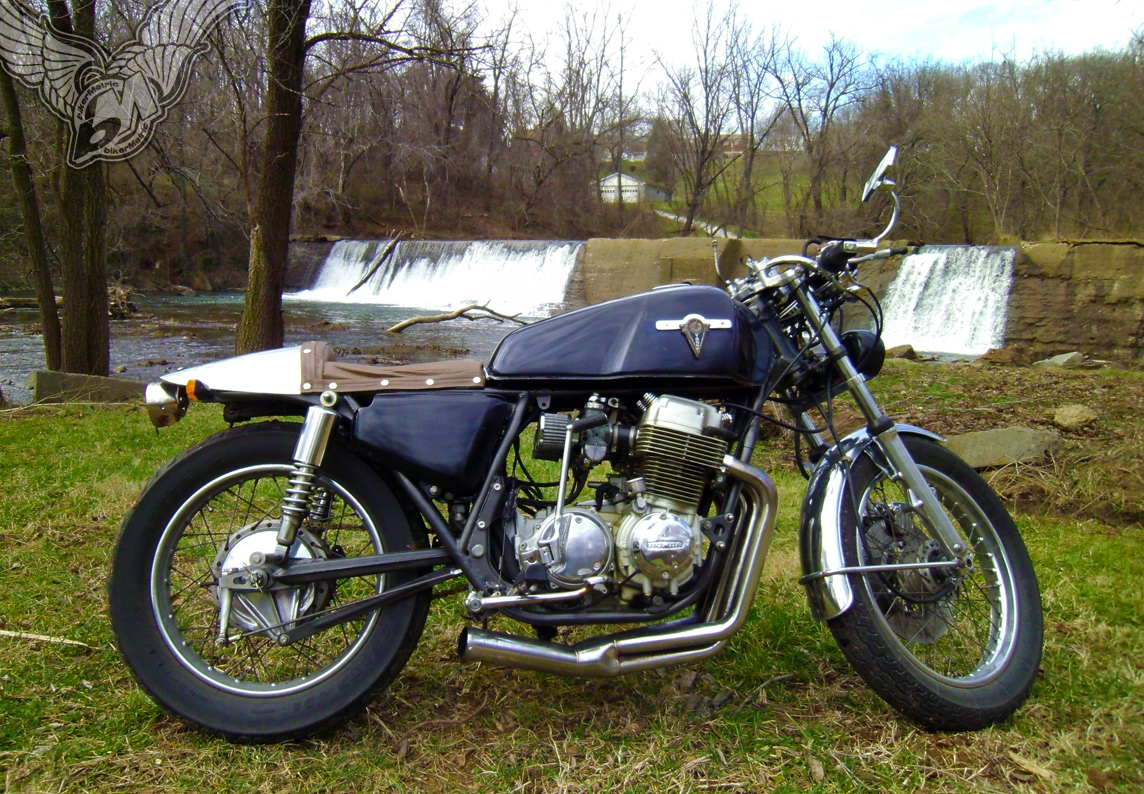 It feels like i am bragging and I don’t like doing this, so I’ll try to make these words a “thank you” to everyone who helped me with my bike. Thank you for your time and interest, it means a lot to a guy like me.

My dad used to ride motorcycles as a young man and started out with two Triumphs, a Cub and a Tiger. My uncle owned one of the local Harley dealerships in town at the time but Dad never owned a Harley. When he sold his last Triumph he went to Honda CB750’s and owned four in a row. The last one was a brand new 1975 CB750 that mom bought him as a birthday present. When mom turned up pregnant shortly thereafter, he sold it with only 357 miles on the odometer. He did not ride again until his kids were grown but his stories about the bikes made me want a CB750, even though I had never seen one in person until I got mine.

For the past few years I have been drag racing cars and wanted a winter project; something new to me, not a car or a truck. At first the idea was to buy an engine/tranny assembly out of a wrecked crotch rocket and put it in the ugliest looking motorcycle I could find. I’d had never even considered the fact to just get an old CB750.

One night while talking on the phone with a good friend and racing buddy about what changes we were making over the winter to our race cars, I told him I was burned out on cars for the time being and informed him of my two-wheeled pipe dream. He said he had an old Honda that he had parked years ago and said if I wanted to use it to just come and get it. Cool! A few days later I went to pick it up…. Four pipes across the front like a CB750 would have. “No way! Is that a CB750?” 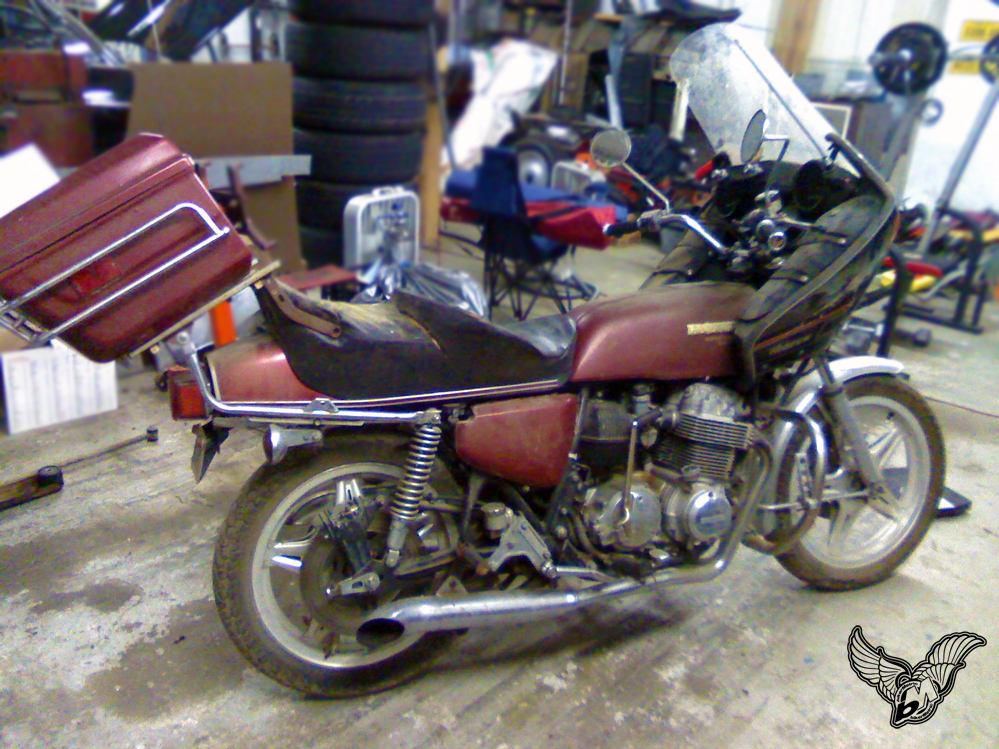 As it turns out, this bike never ran right and one day it just suddenly lost all power. A local shop told him compression was down on one cylinder so he stuck it in the shed. I got the bike home and did a compression check. All was good at 120 psi on all four. Then I made the standard fluid changes and the tackled the carburetors. There was the cause of the sudden loss of power. One of the jets had fallen out of the main body and was lying in the float bowl on the number four carb. I cleaned thm, got a battery, rigged up a temporary fuel source and touched the starter button. She roared to life instantly! Man, what a beautiful sound. This was the first time I had ever heard one of these inline fours run and I was in love.

The poor thing looked pitiful with the fairing, crash bar, the trunk on the back, and out-of-place aluminum wheels so I stripped it all off. Once I got it down to being a motorcycle again, I realized how pretty these engines are and thought to myself, “you’ve been wanting one of these, why on earth would you cut it up?” After researching I found a Honda CB750 forum. Everyone was – and still is – super eager to help with anything I needed to know. I also stumbled across the cafe racer craze that up until now I was unaware of. There was my new idea; “I’m gonna build a cafe outta this thing.”

The guys at the forum were on every day answering my questions, sharing advice, and telling me about all the best places to get parts .They even had the factory service manual for my bike available as a free download. I shared my plans to build a cafe and the advice kept coming. I came up with a design for a tail piece that the guys thankfully told me was hideous. Tools was paramount in the success of this build, especially considering the budget I had. 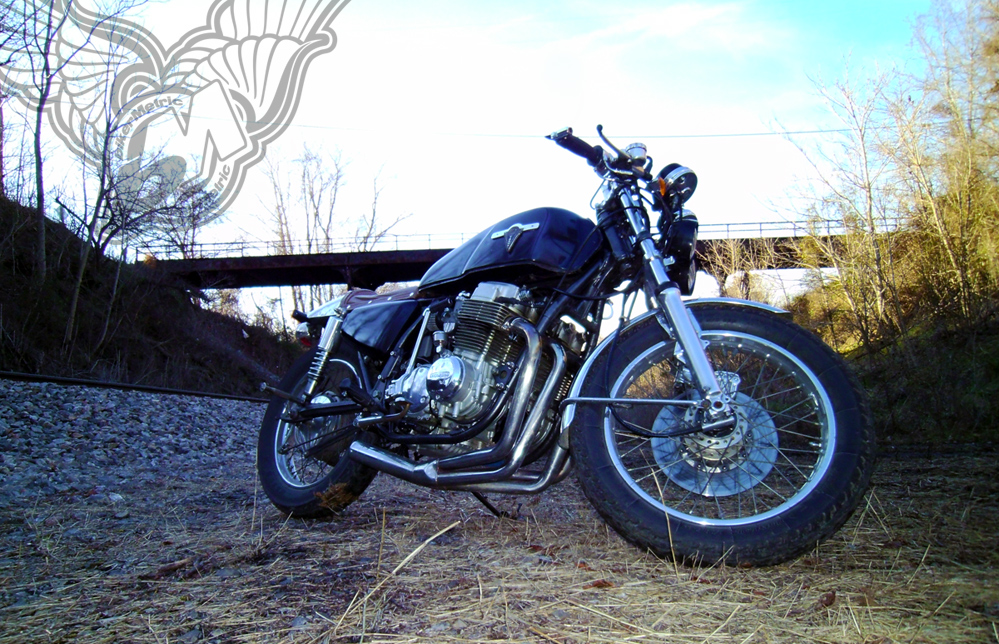 After deciding that $750 was all I was allowed to spend on this bike, I needed new rear shocks and Tools gave me a pair of used – but pristine – shocks. I needed a valve cover breather cover and Tools gave me one. I needed a new gas tank mine was rusted out and Tools hooked me up with a 1987 GS tank he had been holding onto. I traded a set of pods for it. I couldn’t use my existing chopper pipes on a cafe so Tools suggested another trade. The man has everything! Tools got my chopper pipes for the four-into -ones the bike sports now. I had everything needed to build a cafe except a set of spoke wheels ’cause cafes gotta have spokes. The look of the rear disc setup wasn’t to my liking, either since cafes gotta have drums. I found a set of spoke wheels on craigslist with new tires on them for $300. I went to get them without knowing where I would find the rest of the parts to convert to the rear drum setup but the guy had it all; the entire rear brake assembly, the correct swing arm, and even the right pedals. He threw it all in with the wheels and tires for the same $300! 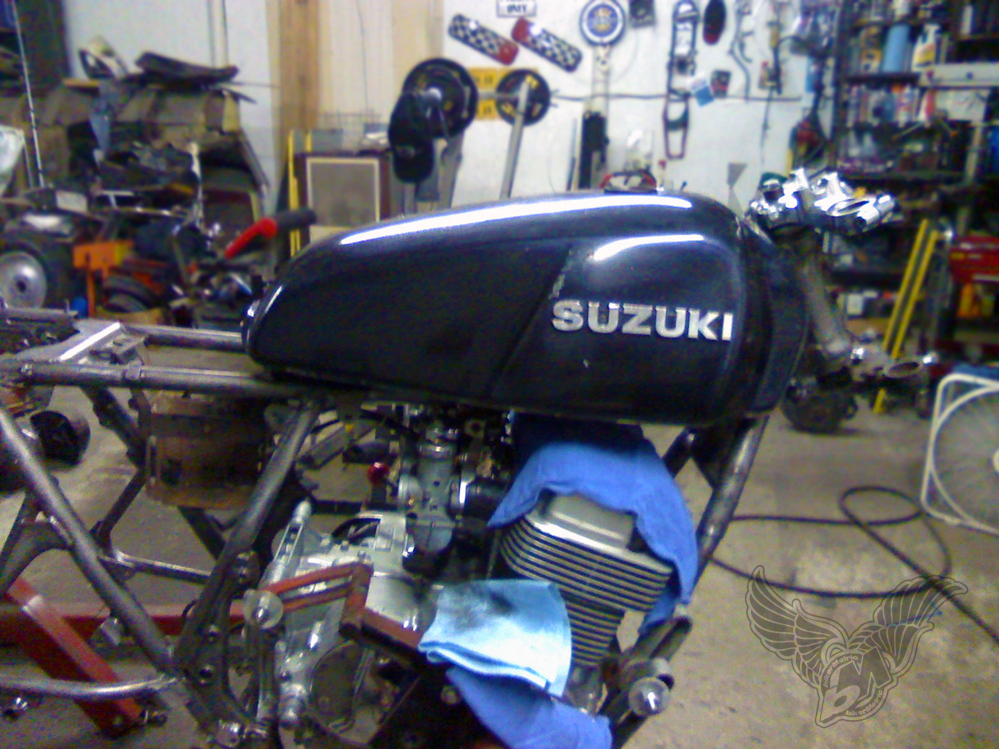 My buddy Chunky from High Impact Coatings in Roanoke powder coated my frame, swingarm, gauge bezels, and every other bracket that went on the bike for a grand total of $150. With the purchase of parts so far I had $450 in the bike. I picked up a chain off eBay for $70, new swingarm bushings for $50, a $40 battery, new valve adjustment caps for $30, and a set of gauge decals for $15. Now I had $655 invested and was running tight with the budget. After a $40 tail light and $15 for a new rear wheel bearing, I was at $710. Getting close! Clamps to hold my new pipes were needed…. $28. Dang it! $738! I was gonna go over budget.

It didn’t matter now. I painted and polished the engine, stole the front brake assembly off my dad’s old VW trike, hung the front end on, wired everything, placed the swingarm and rear wheel and got the gauge faces on. All I needed now was something to sit on. I cruised around close to home with no seat on the bike and didn’t care. I was just happy to be on my own CB750! Chunky let me borrow his English wheel and cut up and old sign and made a seat pan/rear fender for the bike. $20 was spent the upholstery shop across for foam and vinyl. Add the $20 to paint the engine and the total spent was $778. Well, I guess I cant enter the biker metric cheapo challenge now. Dang it. 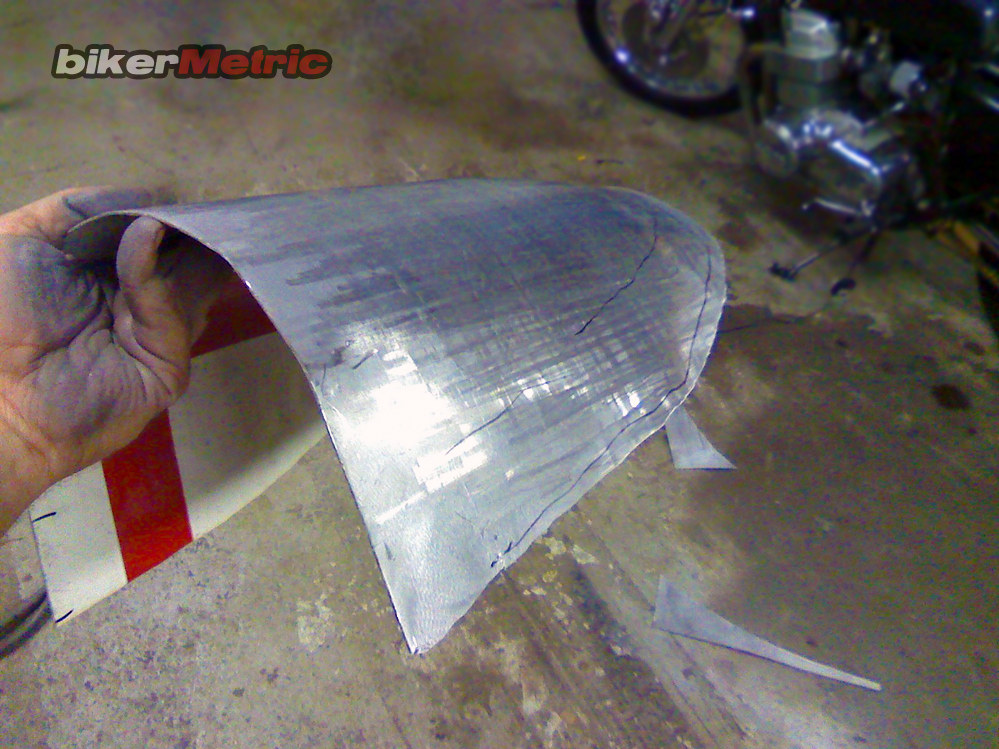 [editor’s note: dude. i’ll give you second place for this ride because it came in under a grand. them’s the rules.]

the tank emblems are a pair of badges I stole off of an old chest freezer headed for the scrapyard. After getting so many parts from Tools, who lives in Kansas City, I started joking around by referring to him as “The Kansas City Motorcycle Emporium.” When I noticed the badges said “Kansas City” on them, I knew it was the perfect fit.

I’ve ridden a little over 1,700 miles since the bike was completely finished in October, and named it “Water Buffalo.”

In an attempt to stay on budget. I decided that clubman bars were an unnecessary expense, so I flipped the stock bars upside down and took off like that. My dad came up to the barn to take a look at the bike one night and stopped dead.

“You’re bars are on upside down.”

“I know,they’re supposed to be. I didn’t want to but new ones.” 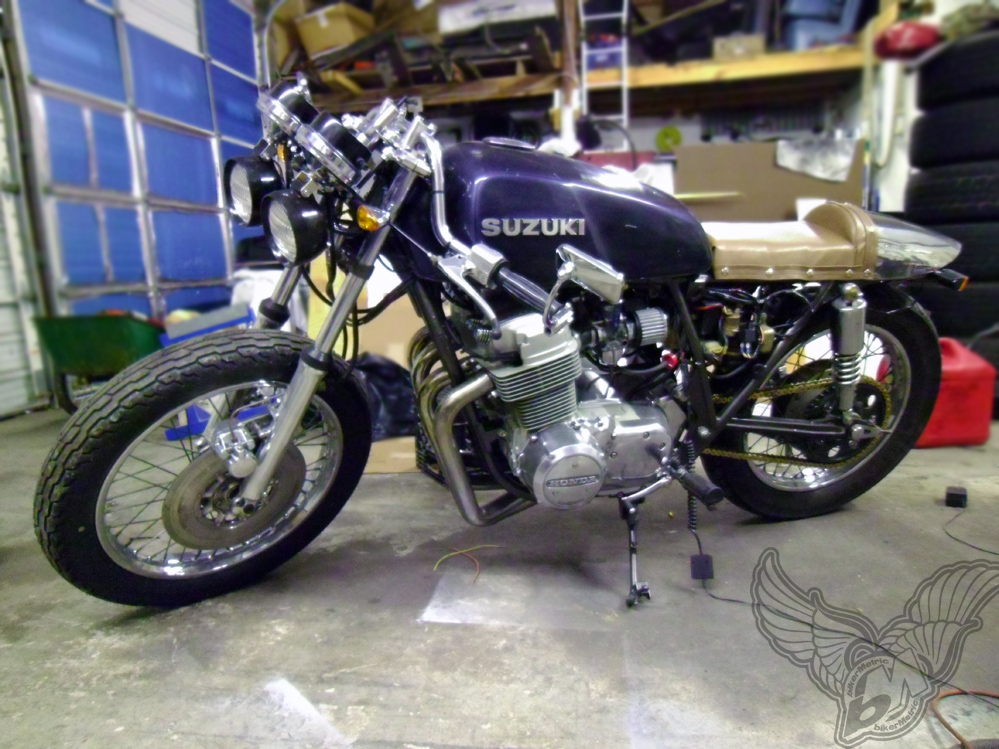 After riding a few hundred miles with those bars, the fun of the new toy wore off and I realized how uncomfortable they were. A trip to town and $25 later and I had a set of clubmans. Much better! 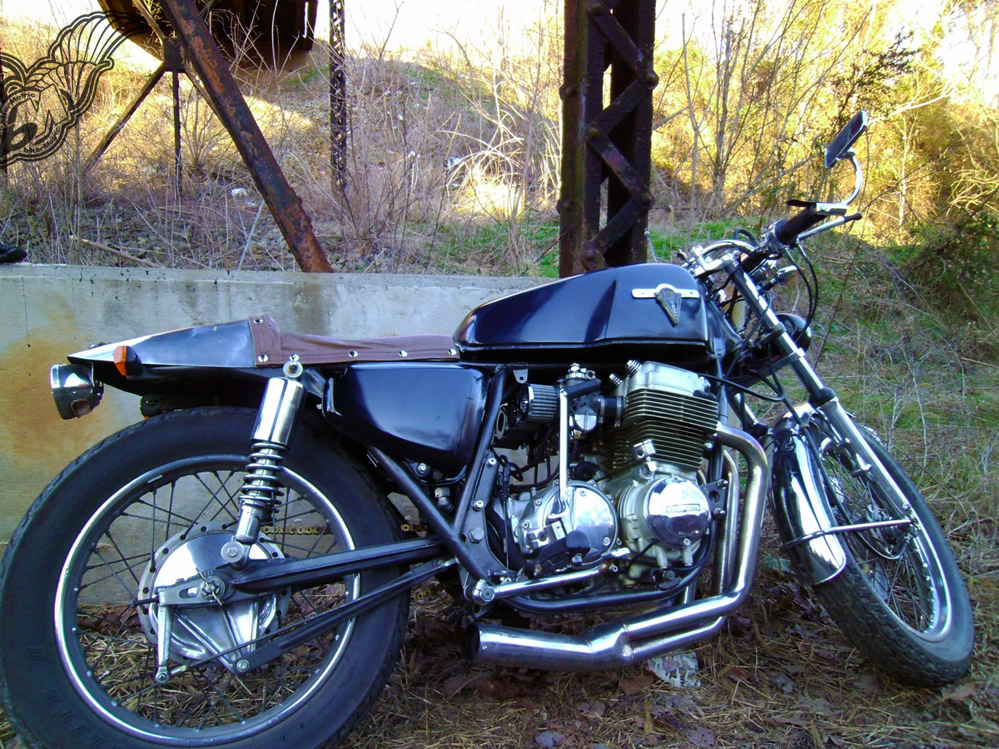 There it is. The bars put my total dollar amount at $803. Oh yeah, add the headlights, grips, bar end mirrors, and turn signals. in all, the cost to build the Buffalo is $900 on the nose. Oh well, you can’t win them all. I’ve had an absolute blast with this thing, learned a lot, and met a bunch of really nice people thanks to the Honda CB750 forum. Without them I would probably still be tinkering aimlessly and searching for parts. Between Tommy, the forum and Tools – who saved me numerous times – there are many people to thank. I’ve enjoyed building and riding the bike but it has been an absolute pleasure meeting some really good people.

right on, eric. it’s a purty motoscooter. look for your stickers in the mail next month, ****, and happy trails. 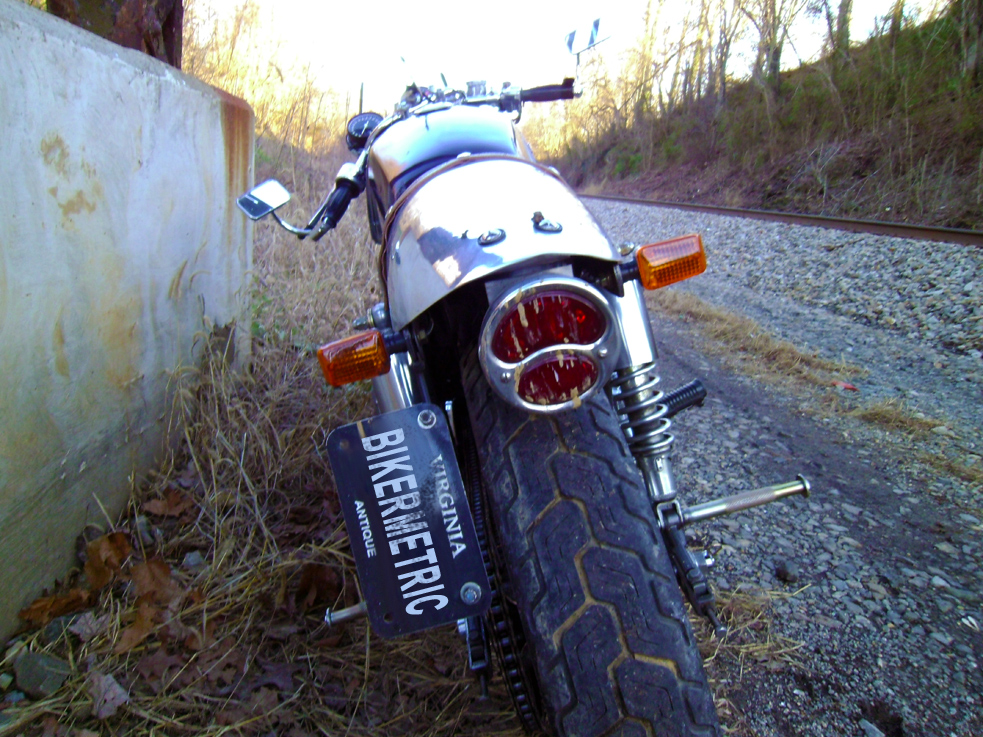