… but secretive intelligence personnel and their devices are everywhere. that tree with new green buds? there’s a camera in there. that woman smiling? an informer. the quicky mart dude from pakistan? a terrorist planning to blow you up. that star you see tonight? spy satellite. it’s watching you through your window as you lean over ever so tactfully and fart.

it can only mean one thing: an epic noobs post. a post about the f***ing new guys. the “hey trent, let me buy you a beer” dudes. the messengers of the word i lay down here. the metric mafia. the cool cats. the douche dampeners. the smiling brothers of revolution.

it’s been a couple weeks since i thanked the noobs and we’re averaging about one a day. that’s good. first, a WARNING:

+  bikerMetric may cause you to tell you boss, bank, lawyer or a cop to f**k off.
+  do not take bikerMetric too seriously unless prescribed by your doctor.
+  bikerMetric is intended for mature audiences only and the views expressed may not be those of your friends
and family.
+  bikerMetric is best when taken with a six-pack of beer or a bottle of moonshine.
+  consult your physician if you visit bikerMetric more than five times a day.
+  in rare cases, bikerMetric causes paranoia, anger, dead bankers, and thoughts of taking off on a motorbike for
a personal and individual understanding of freedom and adventure.
+  call your doctor if agitation lasts more than four hours after your first dose of bikerMetric.
+  in an emergency, treat bikerMetric overdose with a long ride and a sandwich made by a woman.

now that you are aware of the risks, let us proceed in no order of importance:

o.cerna:  no pic. no info. but i managed to discover the killer photo booth image you see below of waylon jennings and buddy holly from 1959 through one of the links he follows. this spy doesn’t follow only biker sites. he’s an intelligent and fashionable spy and probably works without much supervision. unless he has that app. then superman is jealous. i can see o.cerna in my minds eye now, clicking links, taking notes, analyzing the complexities of a myriad of cultural phenomenon to gauge how close we really are to hurting a bunch of bankers and overthrowing our corrupt government. try and catch me, o! 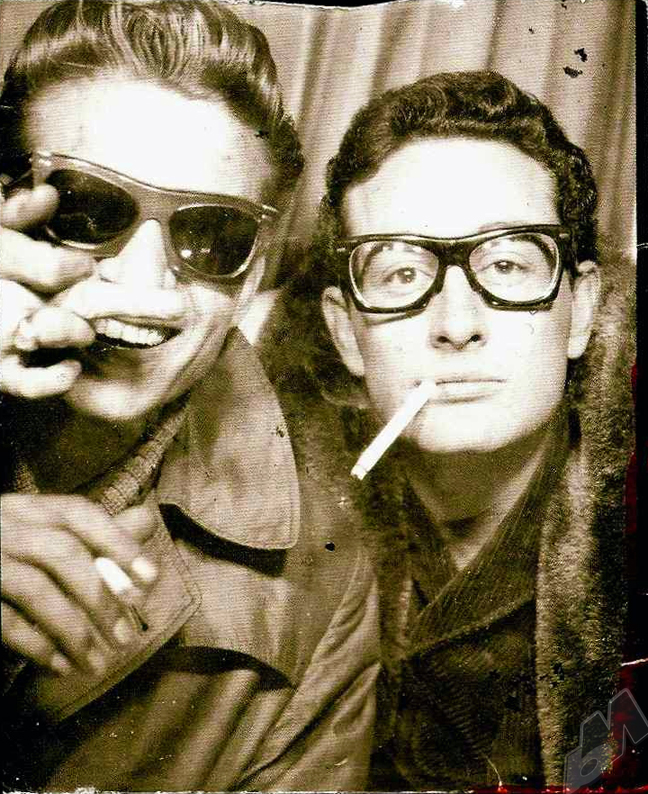 Brian Rucker:  no pic. no info. follows only bM. spy. 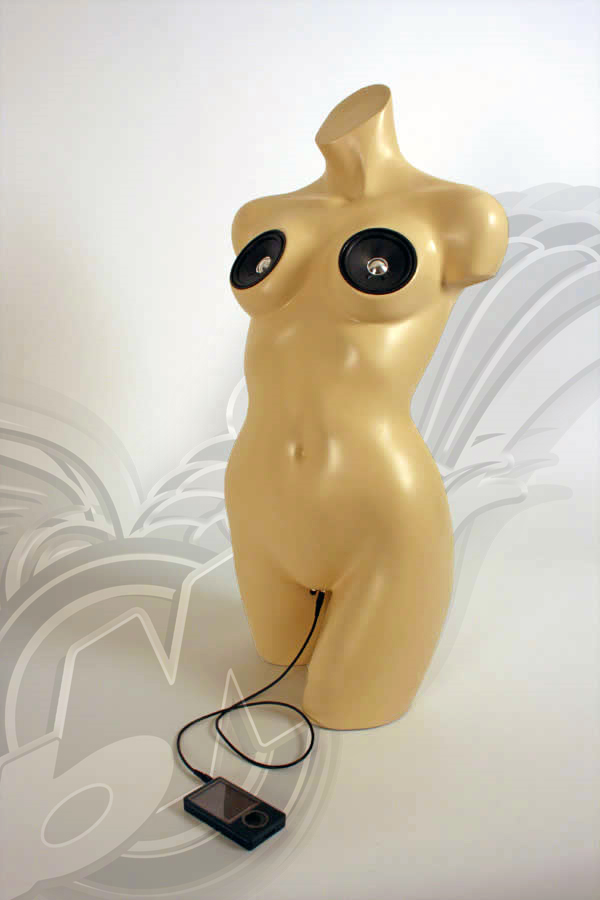 tobitwix: no pic. no info. but his name was easily found in my labyrinthine database of counterspy information. he’s an approximately 35 year old married german dude who loves bicycles, snowboarding and motorcycles. welcome, tobitwix.

Bobbydeville:  no pic. no info. some links. just a guy who likes motorcycles. welcome, bobby.

ljmulalley:  no pic. no info. follows only bikerMetric. spy.

Sopa:  a designer from amsterdam. unclear exactly what he designs. weaponry? furniture with hidden compartments for weaponry? candy that looks like weaponry? i dunno. i think he likes, beer, though. thanks for dropping by, man.

Eddie Bonilla:  eddie is a regular on the bM fb page. he set himself up with a new blog just today. check it out. thanks for clicking the button of your demise, eddie.

ZRN: zrn is zoran popovici, the romanian man behind the outstanding “two stroke to pipe smoke” blog, dark’s mill. he describes it as a blog about “motorcycles, architecture, design, pipe smoking, and Friday Bike **** Pin-ups.” He’s a member of our little facebook clan and he also does complete vintage metric and eurobike restorations. his site, the socialist garage, will tell you more. additionally, you know who makes good spies? romanians. good vampires, too. not sure about pirates, though. thanks for dropping in and turning on, zoran! 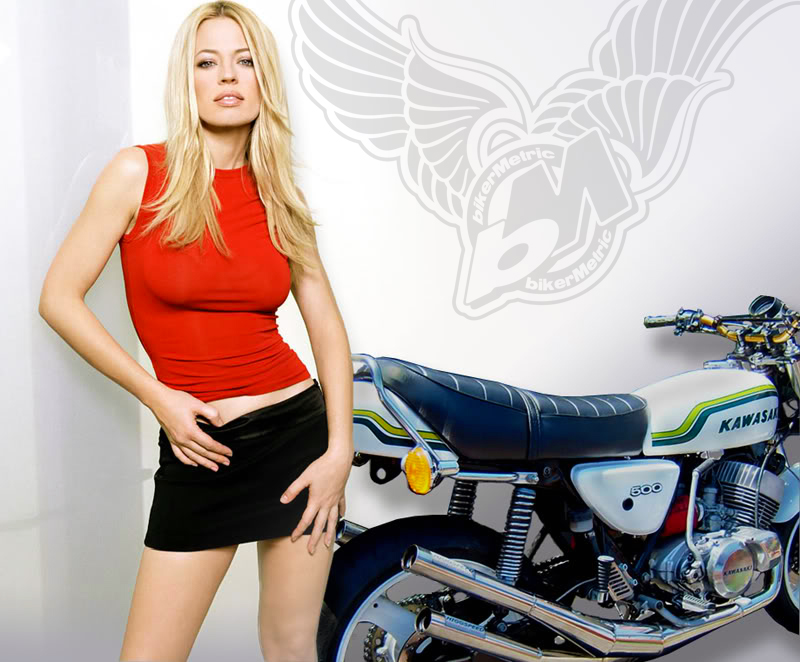 rtwort: this is a great contributor to the bM fb page, robert timmerberg. he’s got a great sense of humor because he seems “like” most of my rowdy jokes, and he offers great opinion and links as well. he does stuff in german, as you can see here. it’s an ad agency and he’s a co-owner. you can find robert on facebook as well. obviously.

Joe: i am not sure who joe is, but he follows two blogs, ours and a political blog. f**k yeah. thanks for fearlessly getting your own homeland insecurity file by joining the metric madhouse, motherf***er!

SACKMAN: excellent and welcome, mister. sackman is a friend of juan’s which makes him a friend of a **** of a lot of people that hang out here and on our fb page with regularity. check out sackman’s blog and dig the “back yard bike building” he lays down. here is a photo of his 1984 honda cb750 nighthawk chopper. gotta love the trucker girl emblem: 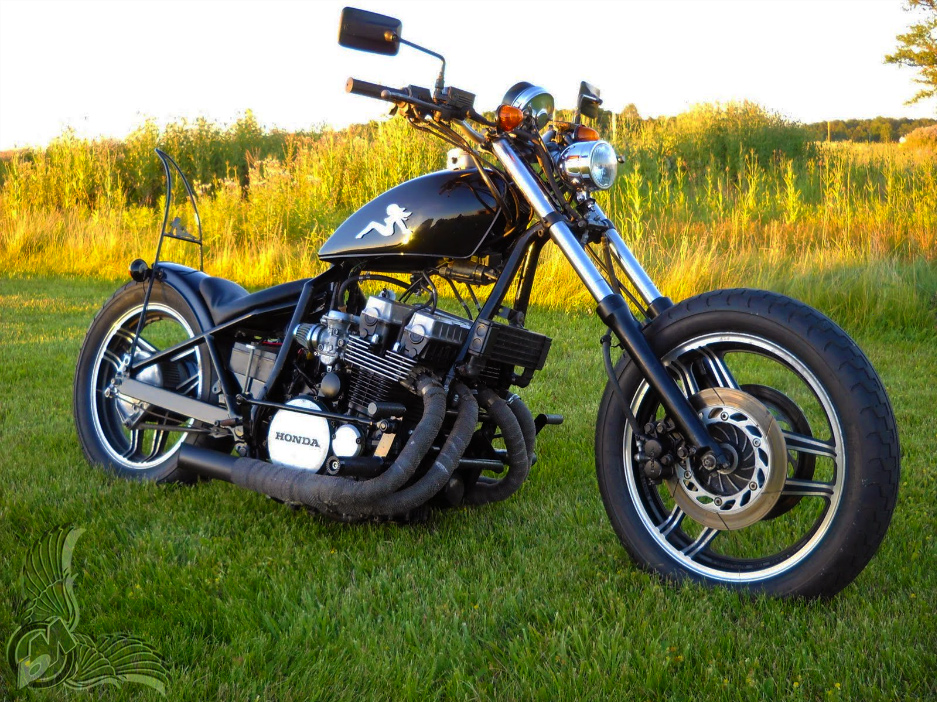 steven:  likes cake and motorbikes and this:

GARASI-KUZTOM-WORKSHOP:  this a group of motorcycle enthusiasts from yogyakarta, indonesia that build killer chopper bicycles. check them out at garasi kuztom workshop. thanks for digging bikerMetric, guys. i wish you great success. here are a couple of nifty pix from garasi kuztom workshop’s website: 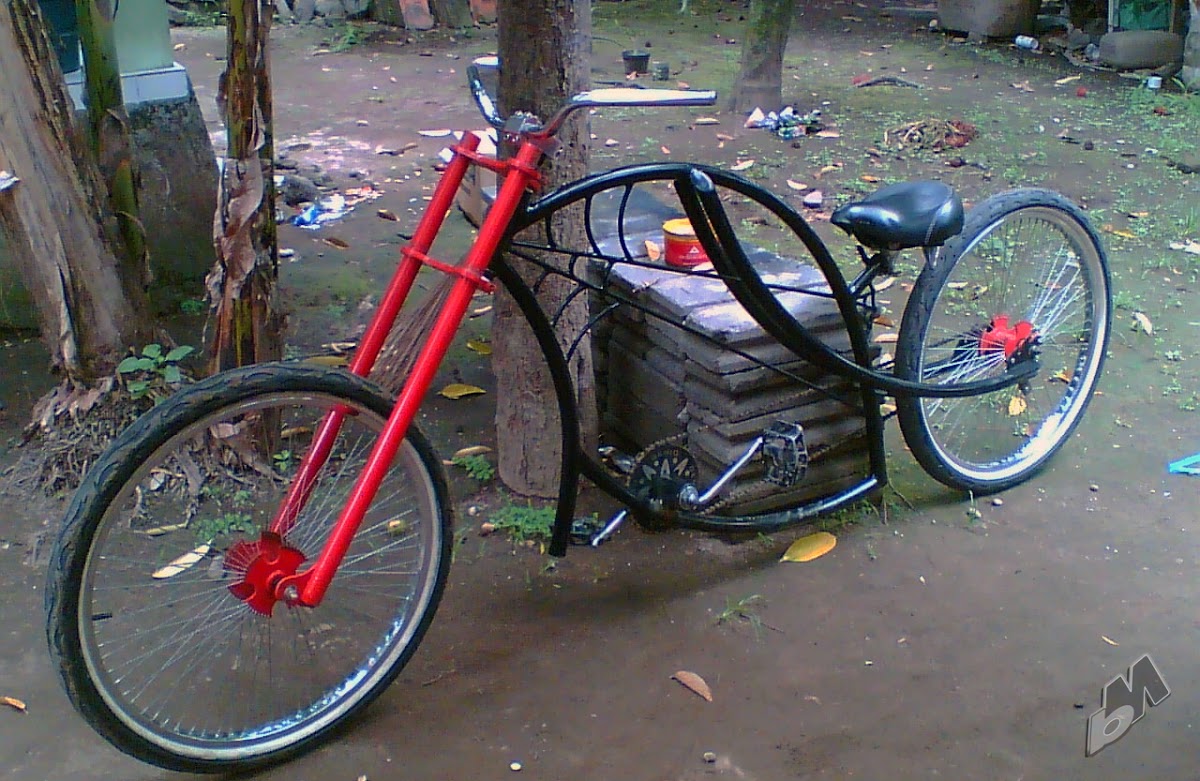 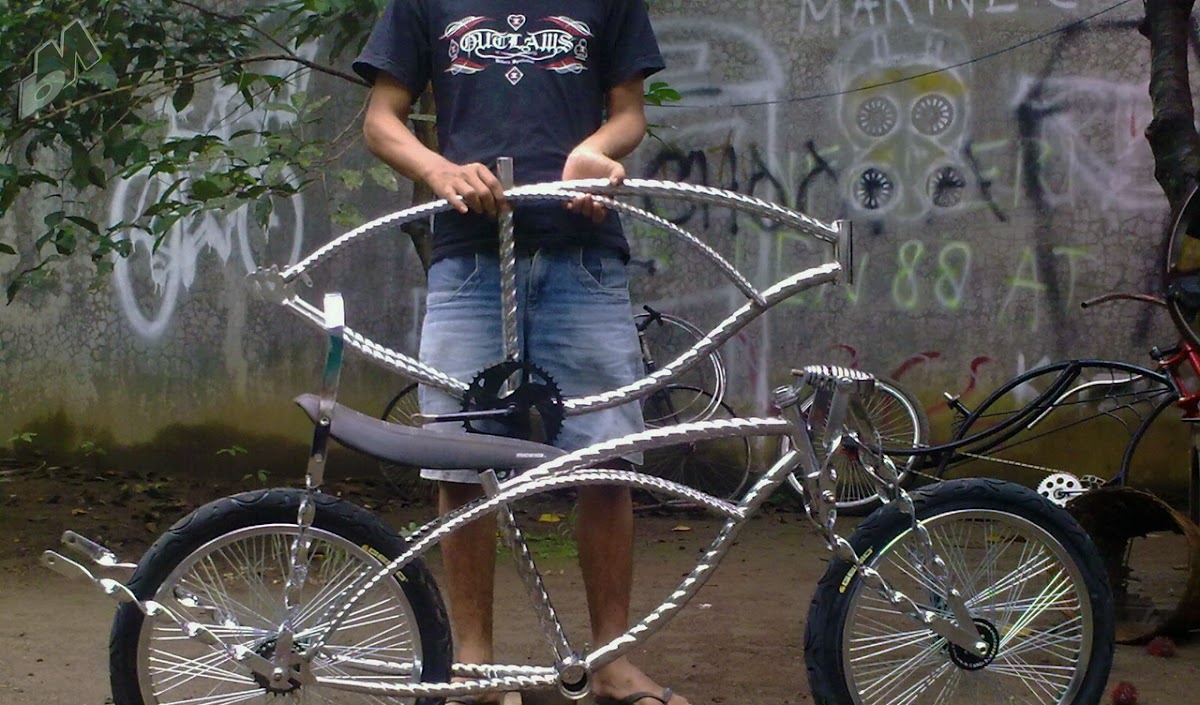 JP CHOPPERS: this was a nice thing to find the other day. jp choppers is another bM fb member and either they or somebody else posted the video of their killer xs650 chopper this weekend, which i immediately yoinked and posted here. they thought that was nice and reciprocated by finding stuff they like here. we’ve got a lot of cool spaniards watching us and it’s all right by me. thank you, jp. can’t wait to see your next build. here’s another by jp choppers, a yamaha xj600 cafe racer named “cafe ole:” 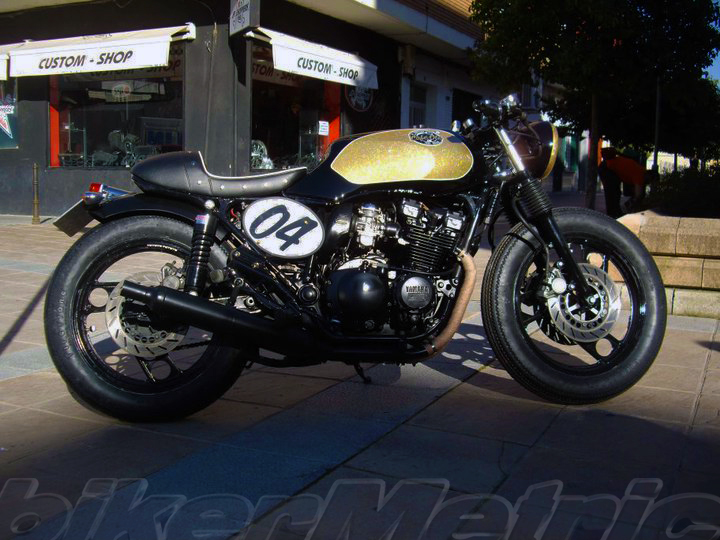 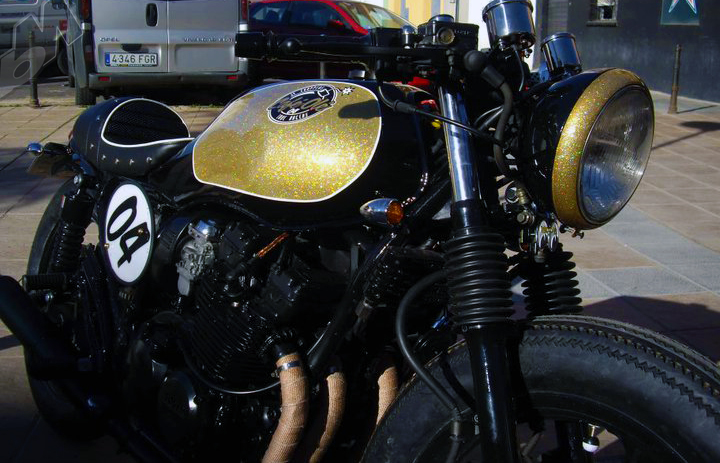 jj:  jj martin follows a handful of biker blogs and is an anchor scratcher. he knows what i mean. just don’t scratch my anchor and we’ll be fine. now swab the deck and we’ll share a jug o’ grog, matey!

there. now that everybody has been introduced, i’d like to give a big ol’ F**K YOU to bp. there is another f***ing oil leak/slick off the coast of louisiana, 100 miles long and 12 miles wide. but it’s hardly being reported between the great suffering of japan and oh, let’s start more war! bankers love war! war is peace! hooray!

f***ing bastards. before i die i’m taking a thousand bankers with me. ka-BLAMMO™

also, who is a hacker and wants to f**k with these guys at noiseoff.org?