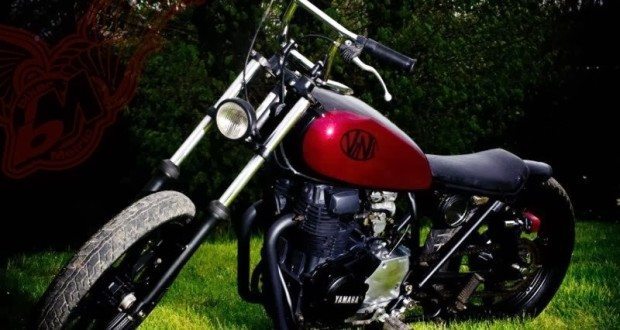 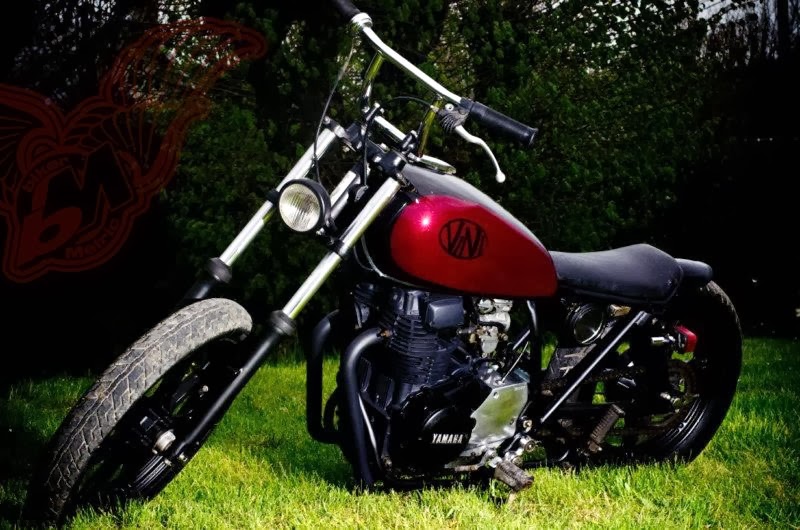 Vini, from Vini Garage Company, reached out to bikerMetric to share his personal bike and introduce his shop to the bM community.

The French builder said that Vini Garage Company, also known as VGC, is about motorcycles first and foremost but that their passion extends to everything in the custom world. This includes music, tattoos, cars, clothes, photography, videos and more. Poking around their website the passion for unique and creative work is obvious, and their 2013 calendar and various videos are worth checking out.

The shop owner, Vini, rides a Yamaha XS400. It might not be the best-looking XS you’ll find on this site but she is ridden daily and still has gobs of curb appeal. 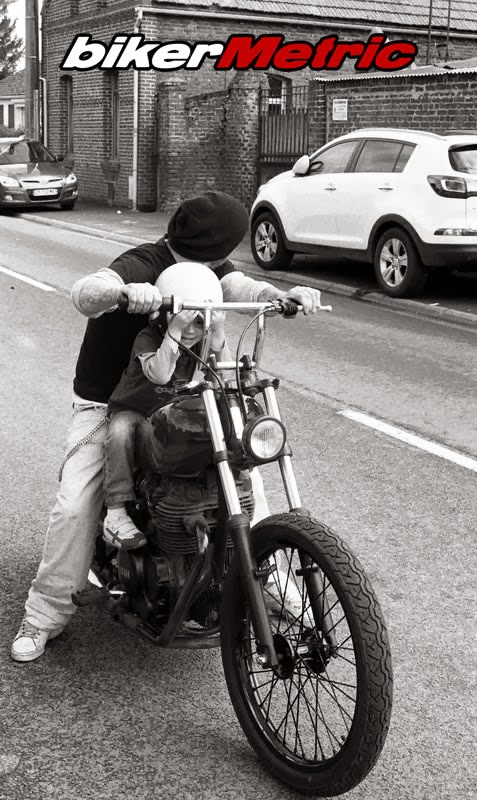 This photo is of Vini and his little woman aboard the XS. The tall and thin front wheel, thin fork tubes and small solo headlight remind me of Harley-Davidson’s Blackline, but cooler. Yeah, we mentioned a non-metric, deal with it.

The chrome mini-apes and lack of any front brake are obvious signs that this Yamaha has been given the custom touch from VGC.

The XS400 rolled into Vini Garage Company with a droopy rear turn signal and a tacky custom seat, but other than the cosmetic issues it was a great place to begin a build.

The stock pipe was shortened; the brake light was replaced and the turn signals and twin rear shocks were removed entirely. The front and rear fenders were removed as well, along with that massive seat. The Yamaha’s side covers were removed, and the shop’s logo was slapped on either side of the tank. As things began to take shape Vini removed the engine so that the frame could be inspected, carbs cleaned and engine rebuilt.

Originally the wheels were painted flat black, but later the front wheel was replaced with a taller, and narrower, one.

Personally I really like that the kick-start was kept, and the lack of levers and gauges at the bars adds to the minimalist look of this Yamaha. We’ve got two Hondas from VGC on the way, so stay tuned and be sure to check back daily.

Pour nos amis francophones, and the English speakers who just like cool motorcycle videos whatever the language, check out this video from the XS400 build!