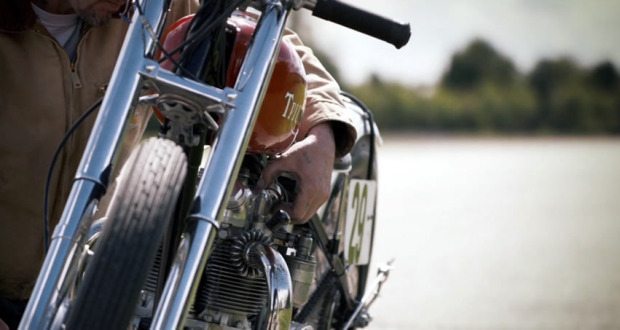 **** Smith aka The Baron, as he is sometimes known, is a 49 year-old custom motorcycle designer and builder based in Croydon, who has been chosen to be the 44th Londoner in the documentary series 1000 Londoners. ****’s speciality is 1950s & 60s Triumphs, for which he has a lasting affinity, as well as other classic British bikes. **** first rode on his brothers track bike aged four and has been obsessed with building and racing motorcycles ever since. His skill, knowledge and craftsmanship are legend in the world of classic custom bikes.

‘****’ is a brand new documentary directed by Alex Osman and submitted as part of the 1000 Londoners ‘Design In London’ Filmmaking Challenge in partnership with the London Design Festival. Alex chose **** because he himself is a motorcycle fanatic and believed that ****’s astonishing skills should be seen by more people.

Want to know more about **** Smith and Barons Speed Shop? Check out this blurb from Southsiders Motorcycle Club:

**** Smith is widely known for his knowledge of all things Triumph.
Having rebuilt an engine at the age of eleven and having served under the famous marques such as BSA and Norton honing his skills in an era of craftsmanship after leaving ace classics it was inevitable that his own workshop would follow. With his friend and partner Del it was 2003 that the Barons speed shop was conceived. A hot rod /speed shop specializing in the American bobber motorcycle and the hot rod style of the 50’s and 60’s.With over twenty five years of experience ,the bikes that were leaving the south London workshop quickly received the recognition from those in the know. With such clients like Charley Boorman and Ewan McGregor Riding these hopped up little bobbers lots more followed, “stray cat” “Carolina kid” to mention a couple. with wide ranges of in house quality parts, bright paint and hopped up motors the bikes have become popular on both sides of the Atlantic. **** has recently moved to larger premises; his new speed shop still situated in south London is equipped to deal with anything the customer may need. Full engine rebuilds, parts and accessories and specializing in one off fabrications. The motorcycles that are being produced are high quality machines many being completed with original parts from back in the day. From good servicing to one off show bikes its all here. Now 2014 **** is firmly established in In the new workshop for all of you involved in building motorcycles whether it’s in the garage or professionally you all know how long it takes to get it just right,and the machines that are leaving the Barons speed shop are all hand crafted.

You can read the rest of the Southsiders post here.