and the motorcycle goes “vroom.”

that motorbike is something to smile about. i’ve never heard a cafe racer sound like dime city’s new cb400/466 cafe racer does. it was all i could do to not call the nearby strip club and tell them to shut down and bring everything over. we had enough beer and could have mounted two stainless poles before they arrived. we were counting our dollar bills and i was ready to take all our twenties to the closest quicky mart for more beer and a few hundred dollars worth of change.

instead, we played with guns. 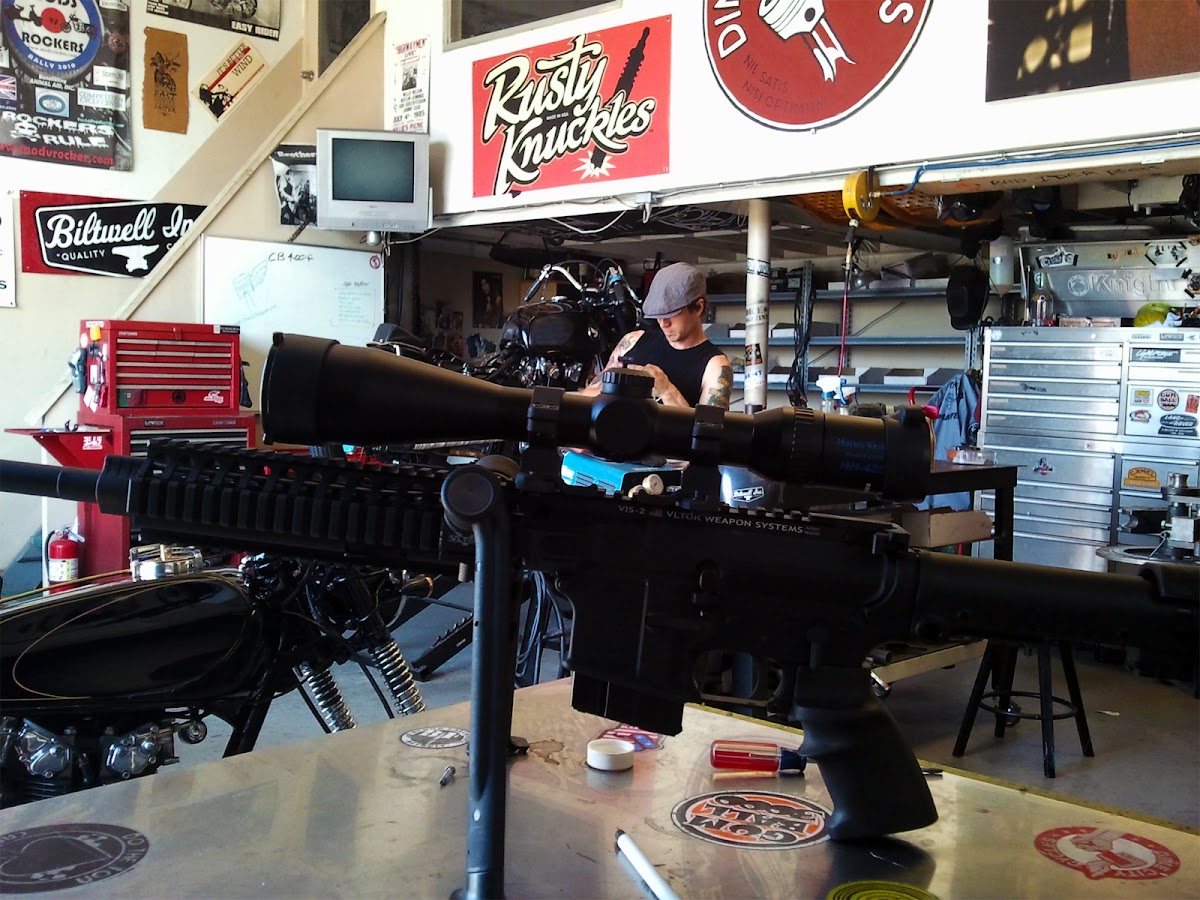 metaphorical jokes apply to hahaha@bikermetric.com. be sure to write “you f***ing *******” in the subject line or your entry will not be accepted.

the video above is simply a teaser of what you’ll see and hear on cafe racer tv this month.

the bike is a honda cb450 ported in tampa (ha ha – a pirate joke)  and bored to 505. it was wailed on by bostrom brothers and will be coming your way on some tv show, whatever it is. i forgot. i should quit huffing glue. how many paragraphs do i have to write to get paid? more? the life story? f**k.

jason and herm have day jobs. like many, they build bikes instead of f***ing hot broads, getting wasted, watching television, and doing things that are fun but don’t fulfill the need to create a machine in our image or a life of liberty in their spare time. mostly.

*** first built motorcycles before robots and androids. just ask honda. lest i bore you with reasons how ignorant simile and metaphor created sentient beings too foolish to understand how accidental self-awareness encumbers the knowing with the need to care for it, i shall instead talk about the sin of prometheus, because fire is money.

jason and herm have given notice to their day gig in the information technology world. they’re betting on their ability to help everyone build a kickass bobber or cafe racer through their services. to do that, they’re sticking it to the corporate man and committing their lives to it. 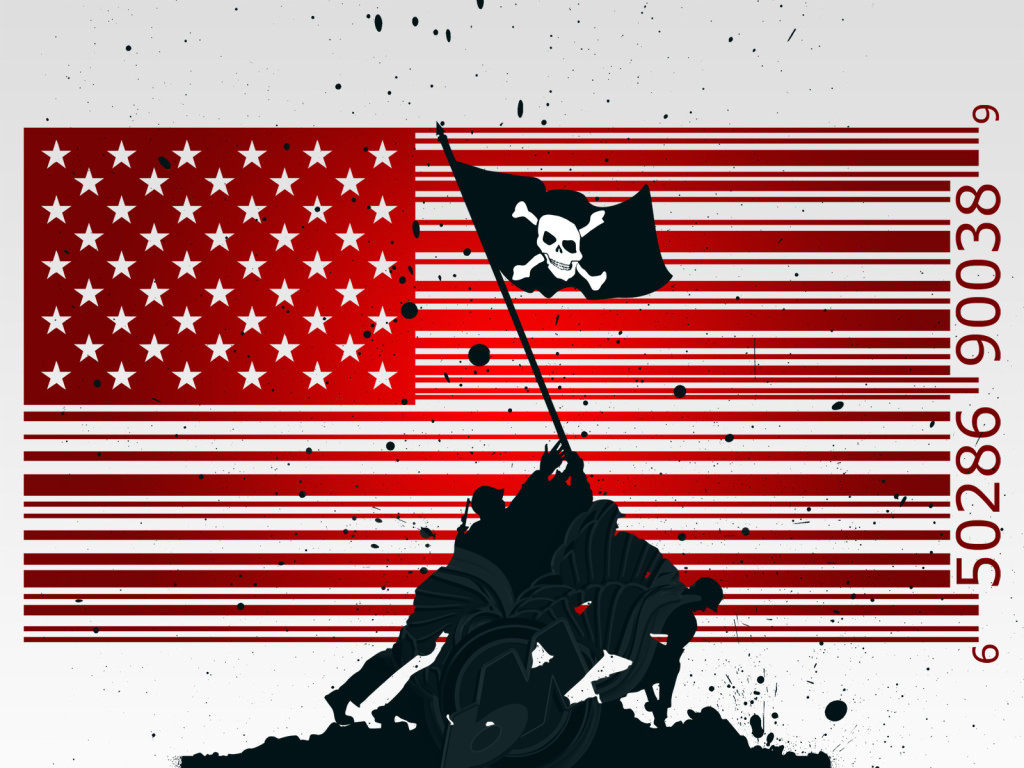 an entrepreneurial soul can only take so much of the cubicle. while jason and herm were able to translate their experience as techs into the motorcycle world, most would be satisfied to work for the man forever, never thinking how else they could apply their knowledge.

i was once told i had a job in a “right to work state.” that was defined by my employer as “this is an ‘i can fire you for no reason at any time’ state.” he did. i wonder what “i didn’t pay overtime for 15 years and owe the irs tens of thousands of dollars” means to that business owner today. especially since the owner, paul “casino” eighmey has admitted to not paying overtime wages to their employees to the department of labor and has tens of thousands of dollars to pay back. the irs is next.

f**k you casino. wait until i start publishing scanned copies of government files and emailing them to the food network and austin news outlets. sell your business now before your name and reputation is worthless.

revenge is sweet like my cold beer at five in the morning but this isn’t about me or casino or how a bike was built exactly as i wanted, but still had crooked handlebars and fender struts and bubbling paint. this is about dime city cycles. 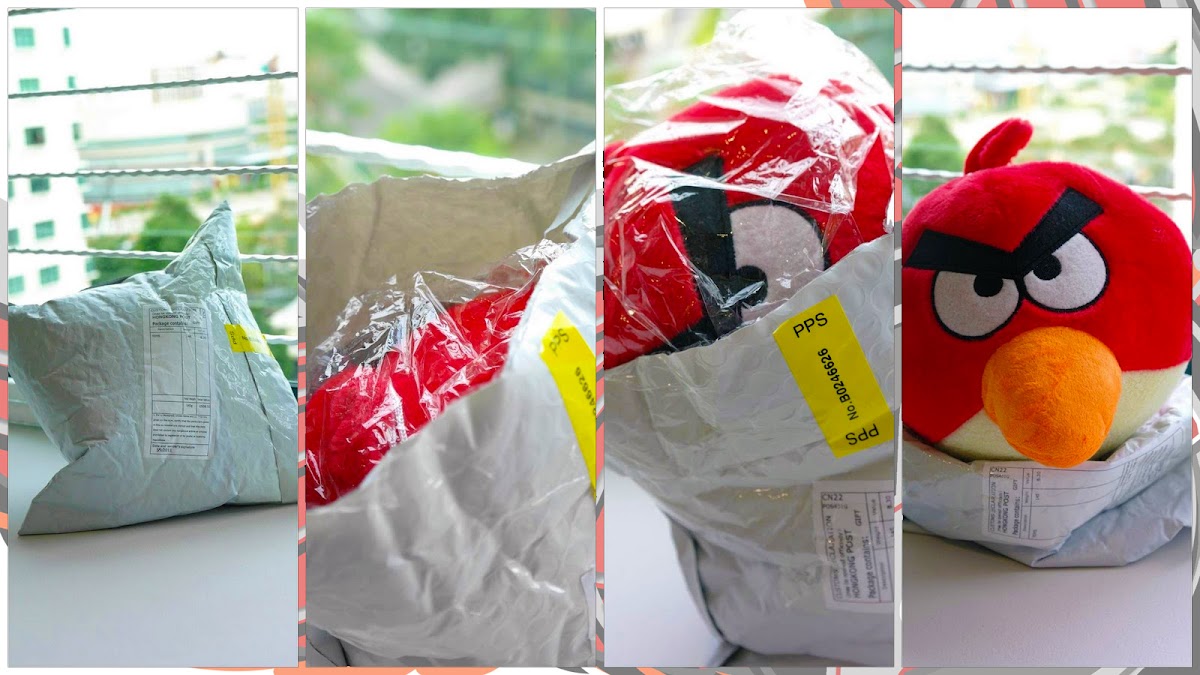 whilst drinking beer today i took two very instructional videos about heat wrapping exhaust. i held the first shot with the camera sideways, as if i was talking on the phone. i blame samsung. the second video is great, because i’d realized samsung’s fault at a break while we all grabbed a beer, smoked tobacco, and discussed world domination while playing with guns and making crank calls to strip clubs.

then we took our beer and tobacco and went for a walk. 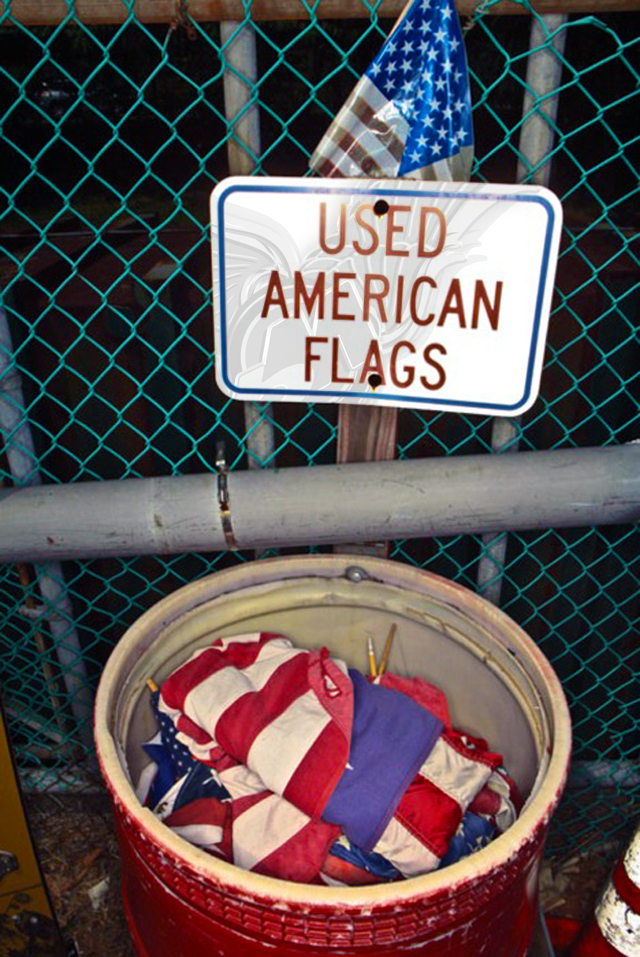 then jesus came to visit us at ihop and i got sick because i ordered too much broccoli just before our lord *** took us to the place in heaven where johnny cash tells ya stuff. 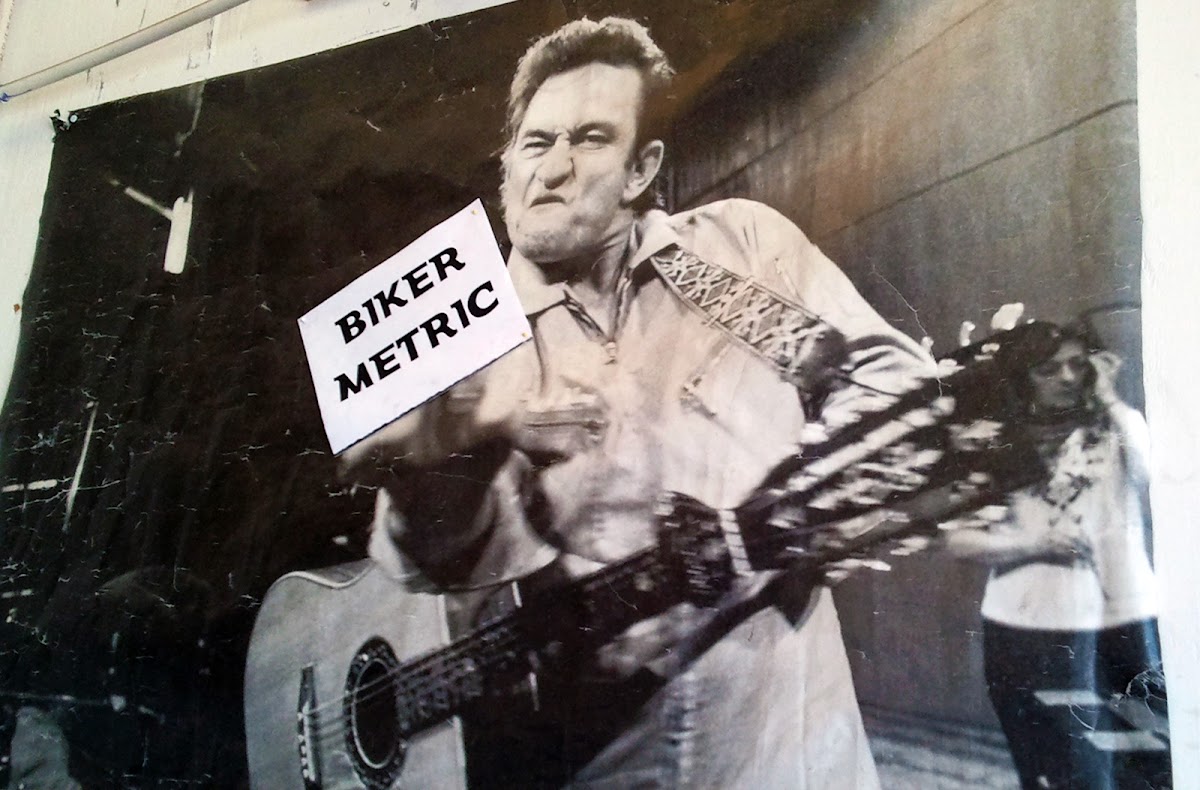 jason told me the corporate heads of discovery thought an iconic image of johnny cash wasn’t appropriate for television. instead of taking the poster down, the good men at dime city thought of bikerMetric. while it is sad to discover how uptight television producers are, it’s humbling to be on johnny cash’s middle finger. that a few dozen people who watch cafe racer tv will see my not-so-humble digital abode of b***hing metric motorbikes combined with fantasies of hurting bankers on the most infamous middle finger is humbling. ’cause you all know what’s going on there. i blame ea sports and lack of government regulation telling us that violence is bad. like *** and drugs. and prostitutes and marijuana. we have no idea how to live! please force us to do it your way that more bankers and corporations might profit by our ignorance and fear.

at the quicky mart: yes. i’d like to purchase this case of miller, a pack of cigarettes, and a lotto ticket.

f**k you. hypocrites. i oughta get w***** and dope at the quicky mart. your pharmaceutical concoctions of cancer and internal body failure are created in labs with results passed on to accountants who determine the payout of lawsuits won’t exceed the profit you make for manufacturing a pill a boy thinks will make his zits disappear.

you know how some folks tattoo a mustache on their index finger? i’m gonna get JOHNNY CASH tattooed around the inside of my middle finger. face it one way and it says JOHHNY. turn it the other and it says CASH. i find that amusing and appropriate. thank you, mister cash, for your candor and love of telling stories and singing and finding love.

watch for the photo of that tattoo in a few days. 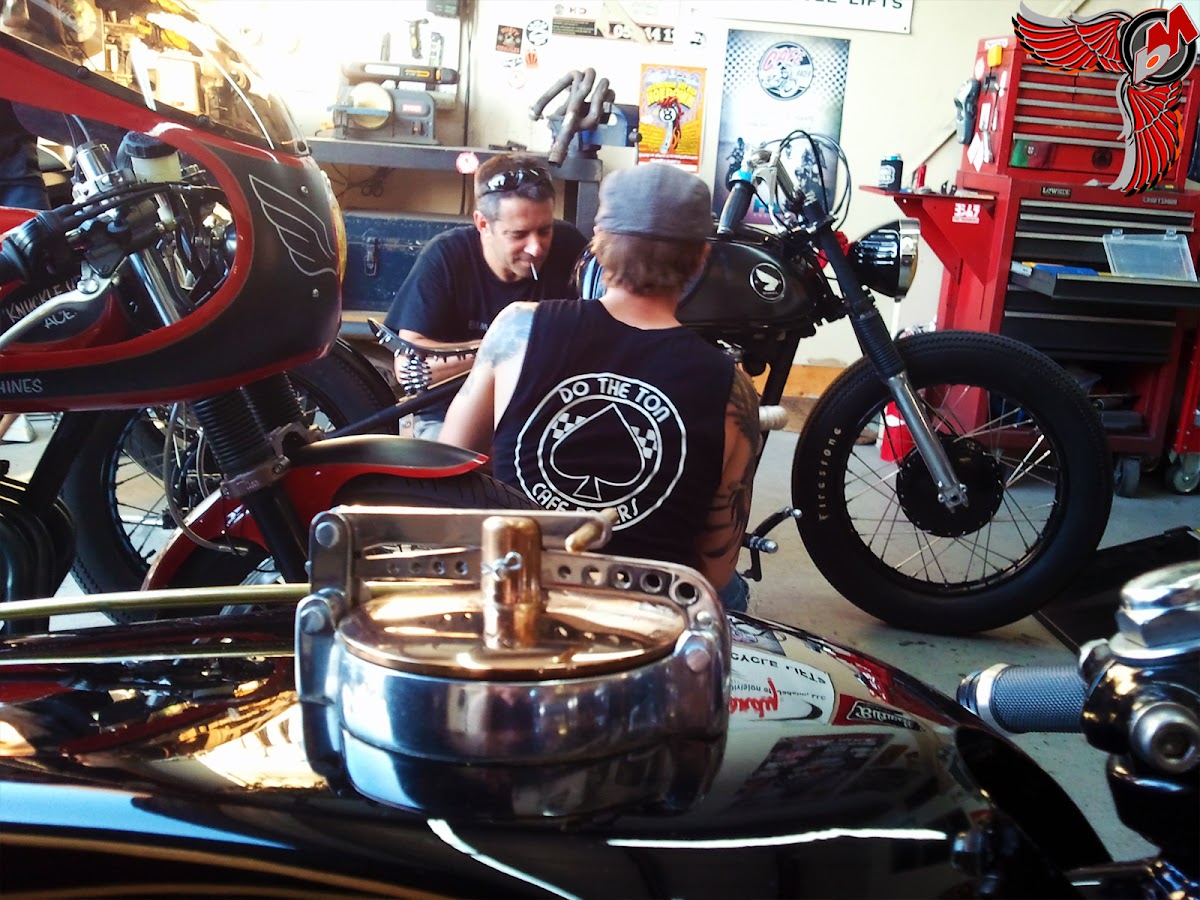 we’re gonna be everywhere. where are you? wanna hang with the metric ****, the mad captain of what should wreck but sails to the western lands with great joy and beer and *** and sweat and motorcycles and more beer and laughter while getting sh*t done?

thanks for coming along. it’s a good life and i pray every day to make it to the next builder, reader, and then to rest. television and BJs. yeah.