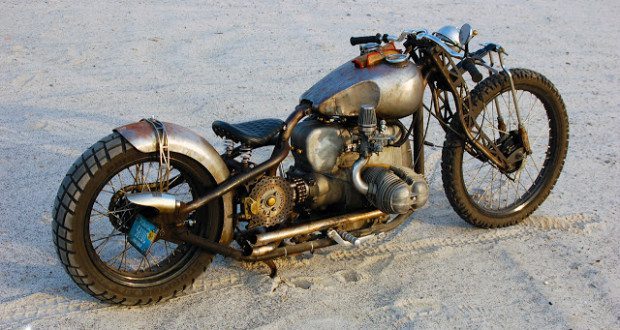 it’s unpainted raw ratbike week on bikerMetric. here is one for the boxer fans to get your beemer boing on. it’s called “fatt herta:” 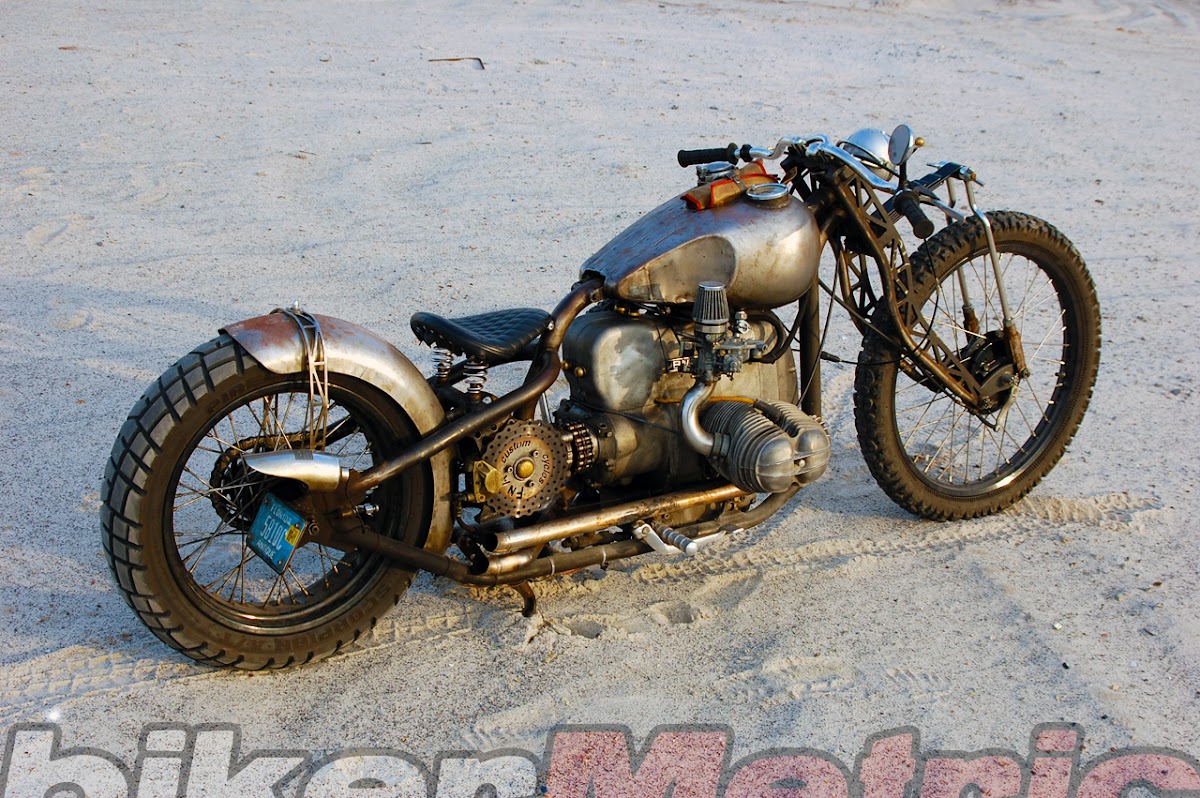 it’s one of many killer creations by fna custom cycles from lakeland, florida. if you don’t understand, fna stands for “f***in’ a!” i like it. this bike is f***in’ awesome.

the story behind fna starts with the owner, eric allard. he was into bikes of every kind his entire life and when he was younger, he mostly dug dirt bikes and atvs. in 2005, he met his future partner john mooney, who opened eric’s eyes to the custom motorbike world. they started working together in john’s shop behind his house for a year or so, building this bmw bobber along with other builds. 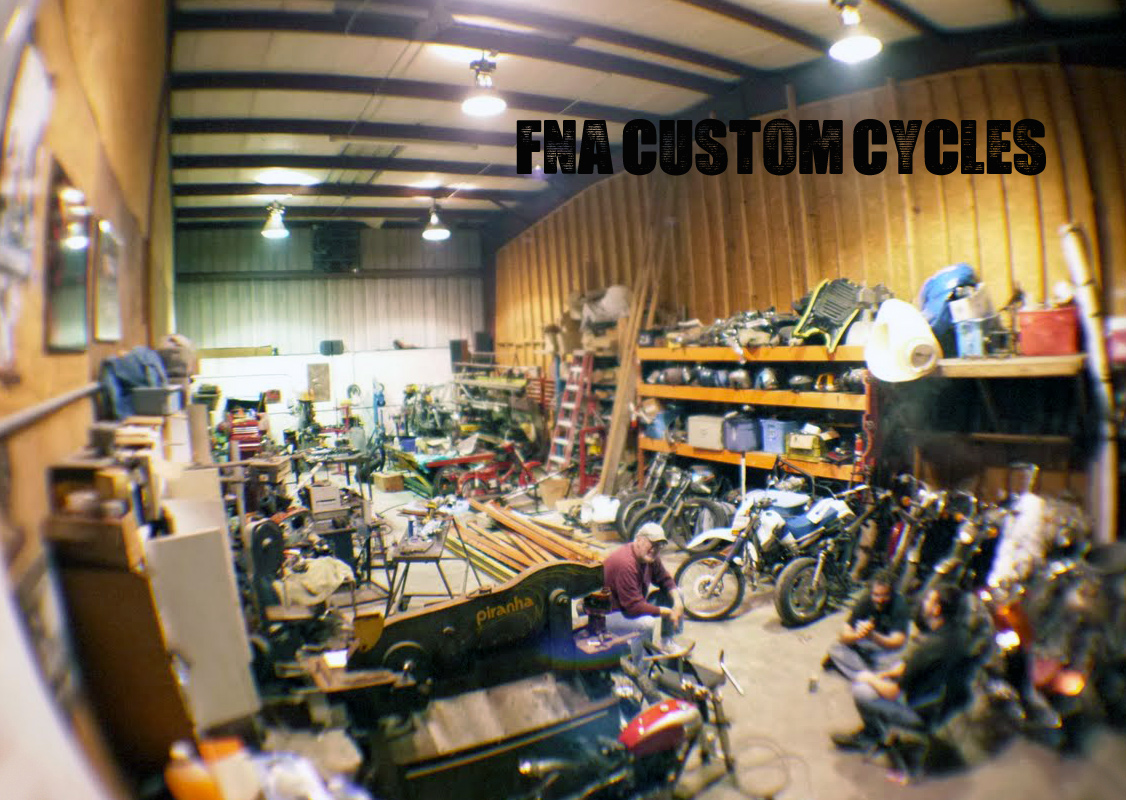 eric had a job in a fab shop at the time and was working toward an engineering degree. it was the natural progression for a man that had been “putting things together (his) entire life.” his current job is about to become part time as fna is growing due to his hard work and dedication to quality custom machines.

working almost every night and weekends in the shop, it grew to the point where it was too much stuff behind a house, so the guys moved to a 1,500 square-foot location. not long after the move, john decided that he no longer wanted to do the bike thing full-time and eric has been going at it by himself the past few years, growing ever busier, while enjoying the freedom of being the only one making decisions. 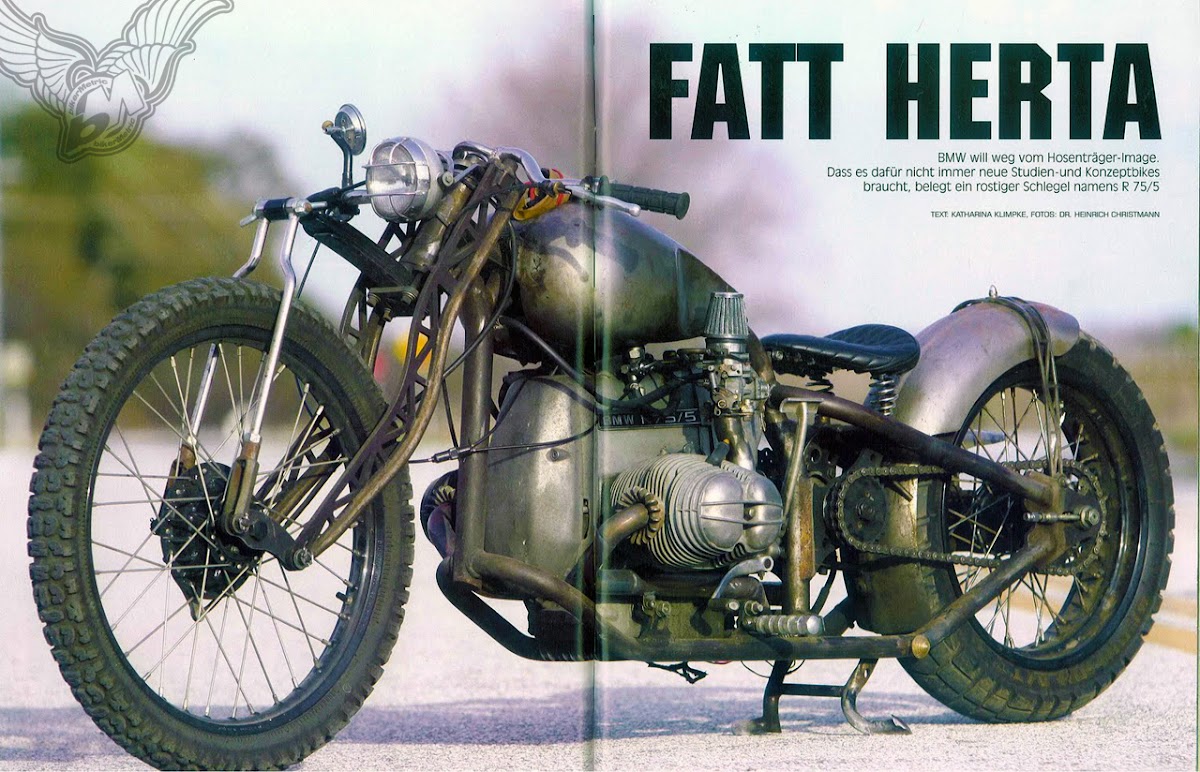 as has been mentioned, eric likes all makes and types of bikes; whether street, custom, import, american, dirt, and whatever, which keeps his customs fresh and not stuck to one type of style. everybody here knows what i think of that. he most enjoys bikes from the 1980’s and older because the components needed to run them are far less complicated than today’s computer-controlled skynet machines. he also has yet to find a good way to hide a radiator. 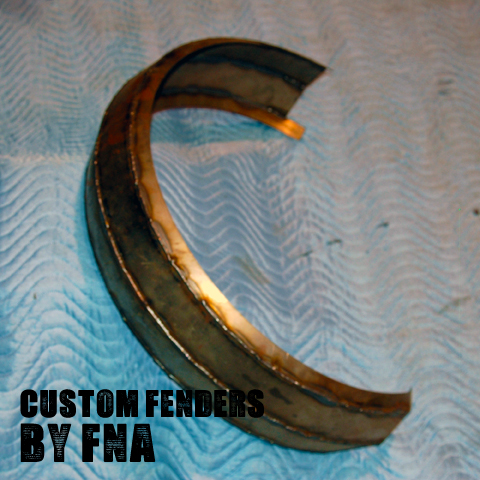 eric does everything from hardtails to entire frames and has a line of custom parts, including handlebars, tail lights, fenders, and other accessories.

this bike started with his wife’s dad. he had been sitting on a stock 1973 beemer, letting it collect dust in his barn. eric had just talked her into getting her motorcycle license and she needed a ride. her dad offered to sign the title over to her on one condition; they must leave it stock.

his wife, wendy, knew eric wanted it for his next build, so she worked on dad while eric greased her wheels by promising to build her a custom triumph. finally, after listening for a month about the significance of this “classic 1973 r75/5,” which eric says amounted to a lot of “blah blah blah,” they talked wendy’s dad into selling it to them. he didn’t want to give it up for surgery, but they struck a deal where they paid some cash, gutted the bike, sold what they didn’t need, and ended up with $130 profit. sweet. 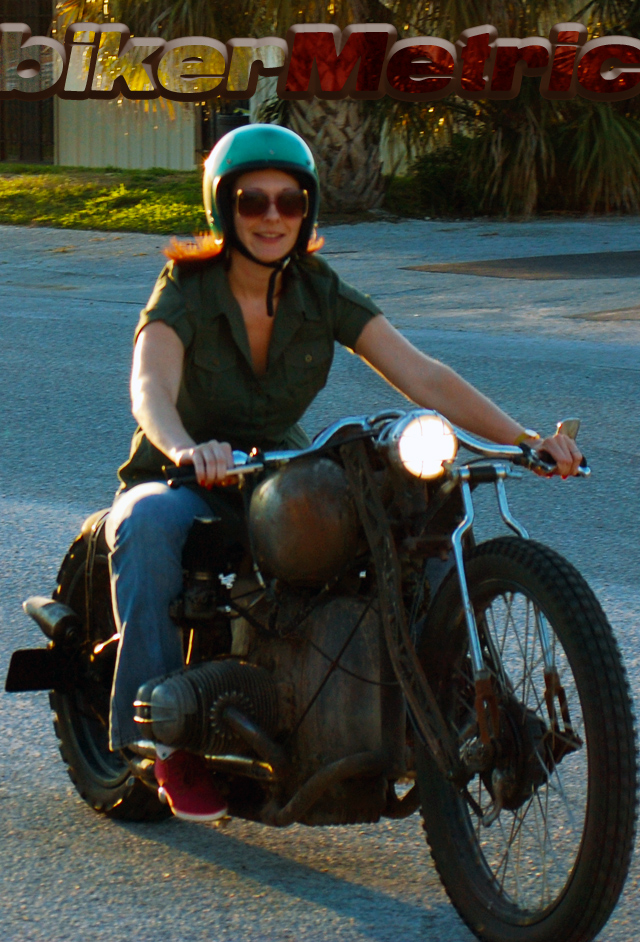 eric started out with a few basic ideas: leaf spring front end, board track handlebars, drop seat chassis, downdraft carburetors, and a certain look. he tossed the engine, neck, and differental up in his frame jig and started bending the tube around everything. using a frame jig? what a novel concept! 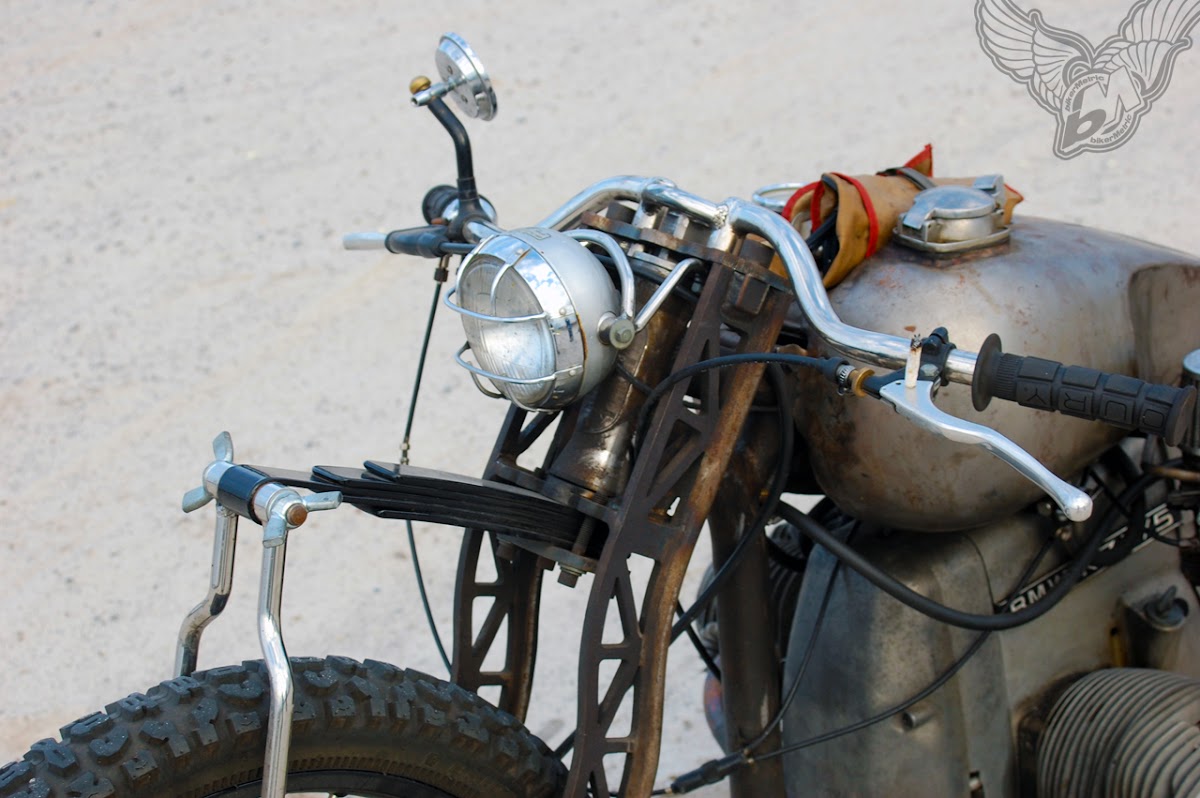 the chain drive conversion was modified from an atv differential after making an adapter from the ****** on the bmw engine to the input splines on the differential. the differential had two output shafts coming off on each side, so eric put a custom brake rotor on one side and extended a sportster sprocket on the other with a bearing support. the rear sprocket had to have 32 teeth and was custom cut to keep the stock gear ratio. 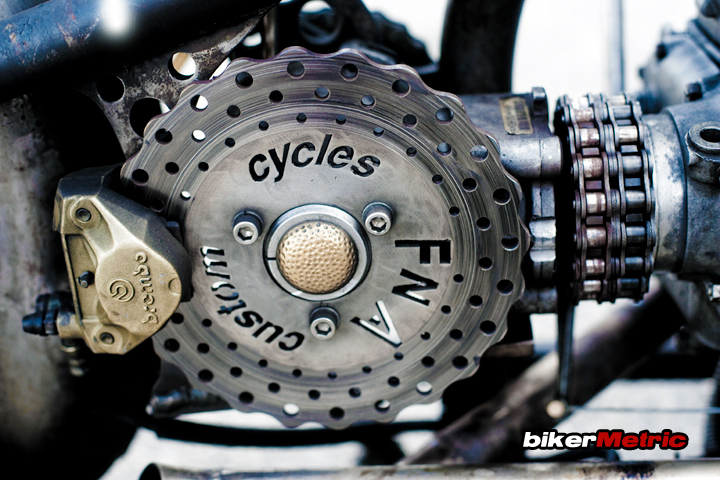 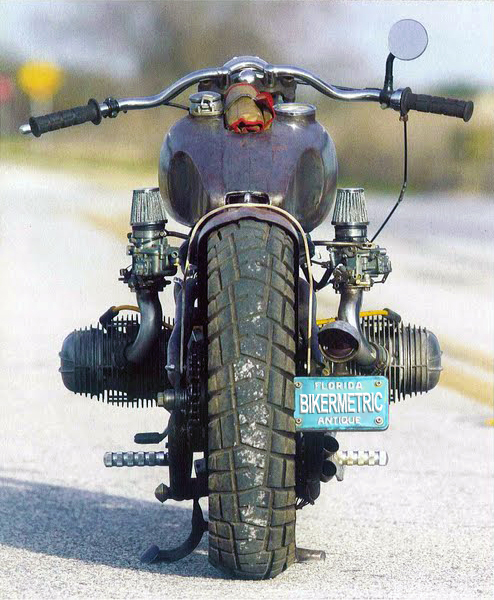 the front end, rotor, fender strut, and bearing carrier were all designed using cad, then laser cut. once the front end was put into the computer, he decided on proper rake and trail to ensure the bike was rideable. another concept some “builders” don’t understand.

eric wanted the tank to look something like older bmw tanks with indented kneepad areas, so he asked john cut up a stock wide glide tank and piece it back together with another buddy, nate, who helped out as they sunk an old speedometer into it. the bars were bent after being packed with sand, and then welded and given back to john to put some shine on the stainless. then they cut and bent the fender strut.

the carburetors are aftermarket weber ict downdrafts made for volkswagens with custom stainless intake tubing. the exhaust is made entirely of stainless tubing.

eric has been riding this bike since 2009 when it was completed with only a few changes. he says it has several thousand miles on it and is a blast to ride. i can imagine.

thanks for the pix and info, man. it’s definitely a great bike. check out fna here, f’n mofos. 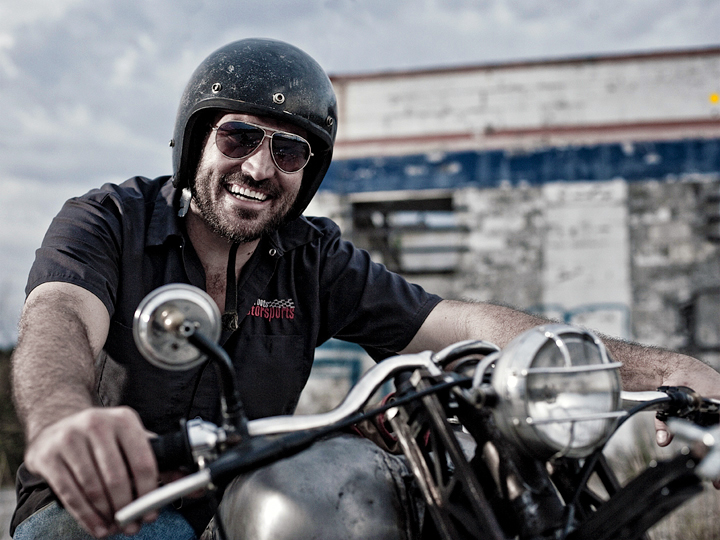 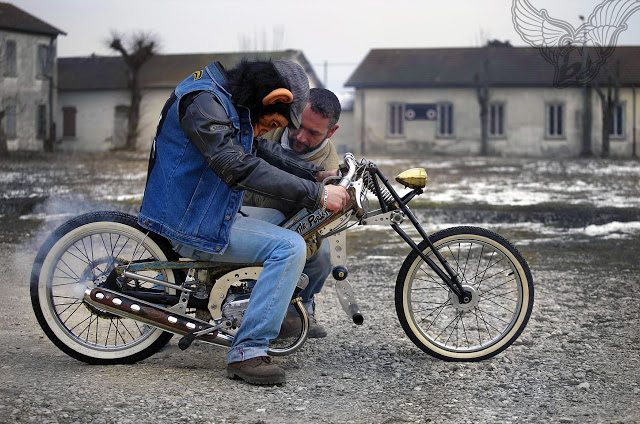 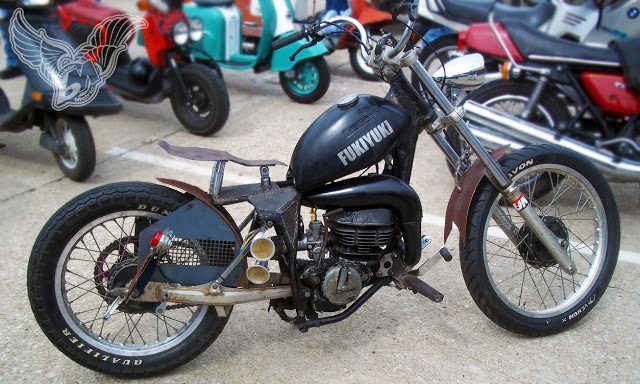