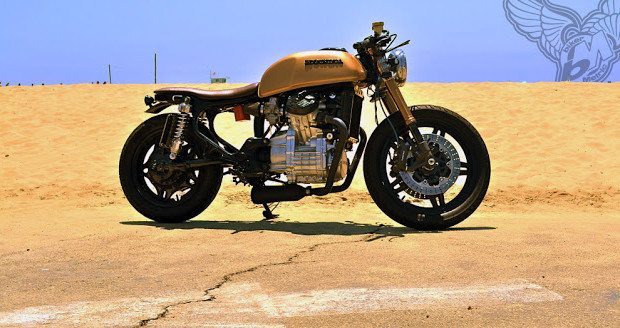 received some pix and info from mister justin allen about his custom 1979 honda cx500 deluxe about a week ago. this is what he wrote about the build, with a little editing done by some ****** who posts bikes on this blog whenever he feels like it:

This bike was a Craigslist purchase. The previous owner had some friends in the car industry so he had already started modding the bike before I bought it, which seemed to be mainly hacking some of the frame off and painting tank the Honda Element green, which made me gag. 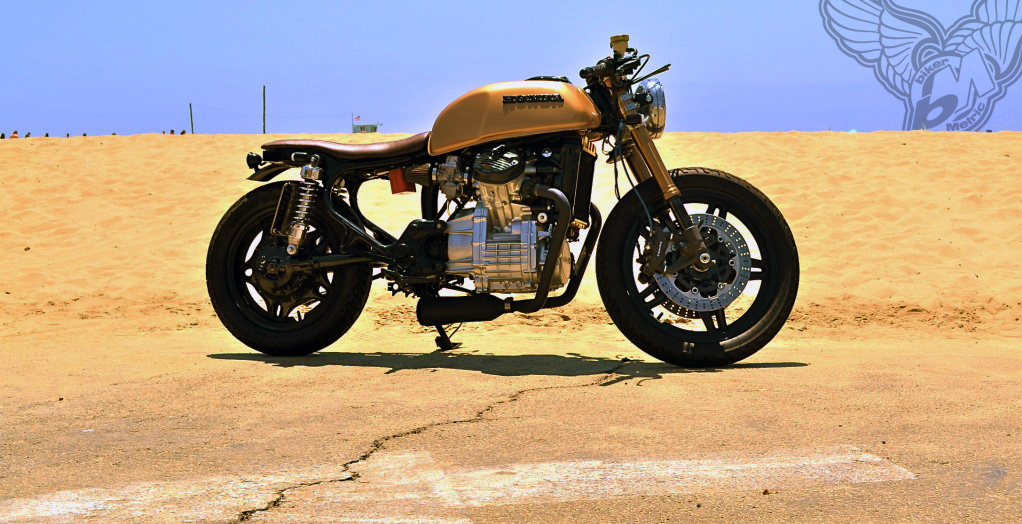 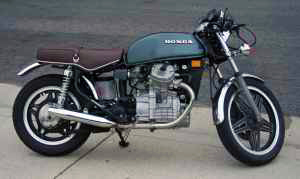 Living in Los Angeles means you either sit in four wheels in traffic for hours to get anywhere or you feel the wind in your hair and get there in 20 minutes; so I intended to ride the bike as it was and make small changes along the way. As I started doing routine “new to me” maintenance, I found a lot of issues that needed to be fixed. Exhaust leaks, an exploded fan sitting in the bottom of the radiator shroud, and a tempurature gauge that didn’t work. These things made me hesitant to trust the bike. I started getting deeper into fixing these items in the bottom level of my apartment’s parking structure. When I finally got a garage, I decided to fix the oil leaks and check out the inside of the engine. That’s when I told myself, “self, this thing is apart. Just make it what you want it to be.” So I started tearing everything down. This would be my first build without the help of my grandfather’s guidance so I learned a lot of things the hard way. 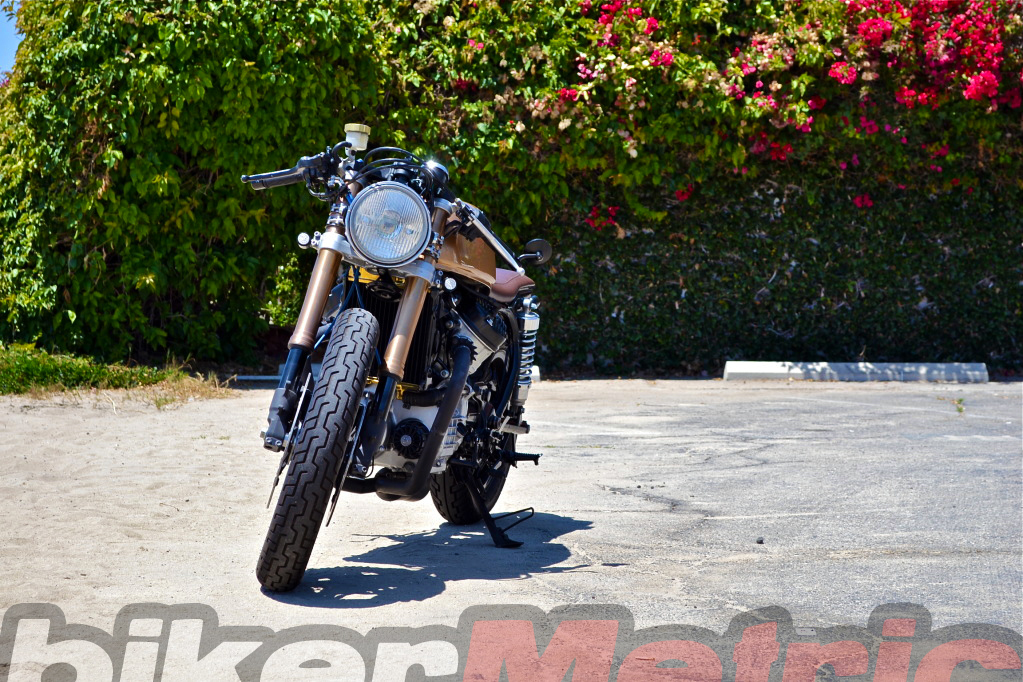 I found a lot of inspiration through blogs but I really wanted to make the bike stand out. That’s hard to do with all the great custom builders that are around right now. The front end really makes this bike pop. The forks are from an 2007 GSX-R 1000RR. The triple trees and hand controls are from a 2004 Honda CBR1000. They mated with the CX’s stem with no major modifications quite well though they did have to be modded to fit the GSXR forks.

The rotors are from a 1995 Ninja Z5 and the bolt holes match up with the stock CX wheel. Motorcycle performance in Los Angeles did the adaptor plates for the brakes.

I’ve never really been in love with the cafe bump so I wanted to avoid that if I could. This lead me to go with a more flat track style seat while embracing the nuances of the CX frame. I loved the way the slight rise in the rear of the frame looked so I fiberglassed my seat pan around that. It was then covered by Batz Auto Upholstery in Los Angeles. 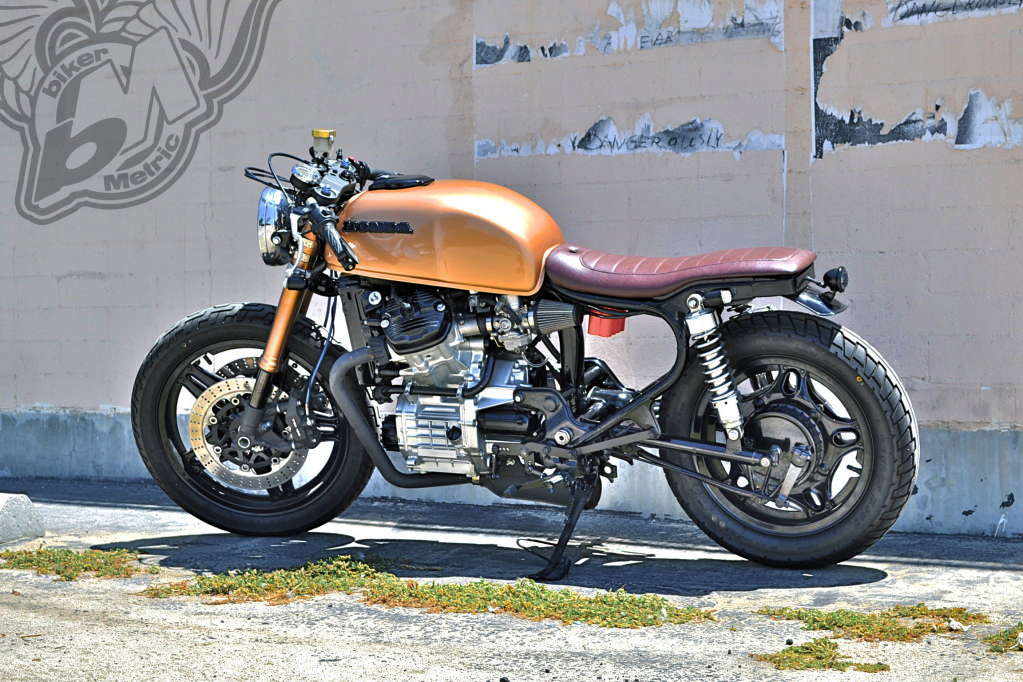 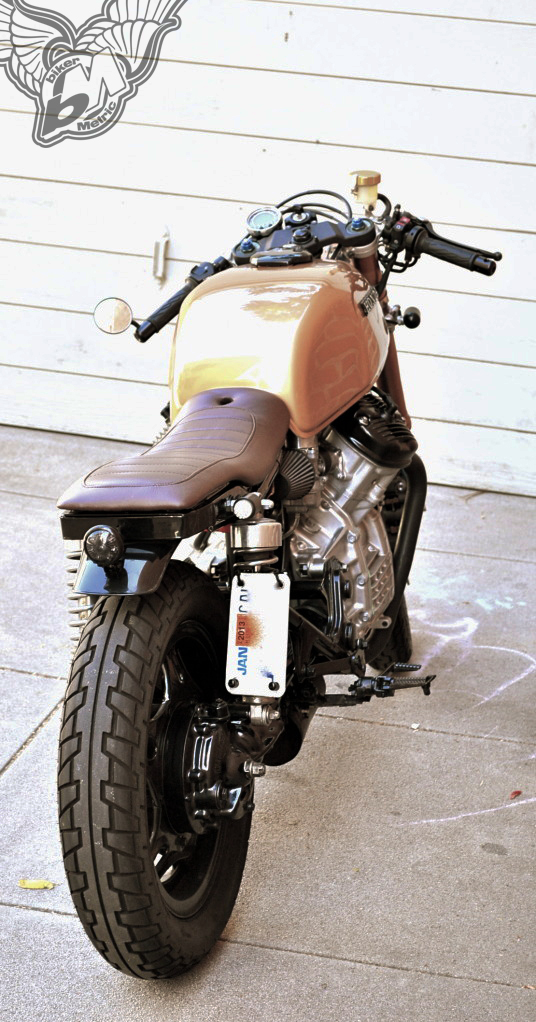 Exhaust was my biggest worry but really like the set up on the bike. I think the exhaust makes or breaks a bike. I didn’t like the Motad (you actually lose a significant percentage of horsepower with the Motad system) or the MAC 2-into-1 systems so I called upon a friend and CX500forum.com member to help me out with some welding. We chopped up some old CB pipes and made the setup rest under the engine where it mates with the Supertrapp muffler.

The engine that is currently in the bike is actually the 2nd go ’round. The first one ran after I completed a “triple bypass,” but on my maiden voyage to the muffler shop my rear wheel locked up. After tearing the block down I found that the camshaft sprocket bolt had been over-torqued and snapped in half, causing my cam chain to break and the rear case of the motor to be shredded to bits. Another CX500forum.com member has been extremely helpful throughout this entire build and walked me through the possible causes of this catastrophe. He also helped get the Mikuni Smooth bore carbs, the final touch of the bike.

Dropping the stock airbox on these bikes leads to carburetor issues that never stop so the Mikuni conversion will boost horsepower by about 10% and make my life a lot easier. Once the adaptors for are complete, the bike will be done.

If I had to it over I would, but I would do a complete mock up before I had the frame powder coated! I’d also pay closer attention to details in the bike’s manual as it will save a lot of headaches in the future.

right on, justin. thanks for the tips and build info. she sure is a sweet motorscooter. 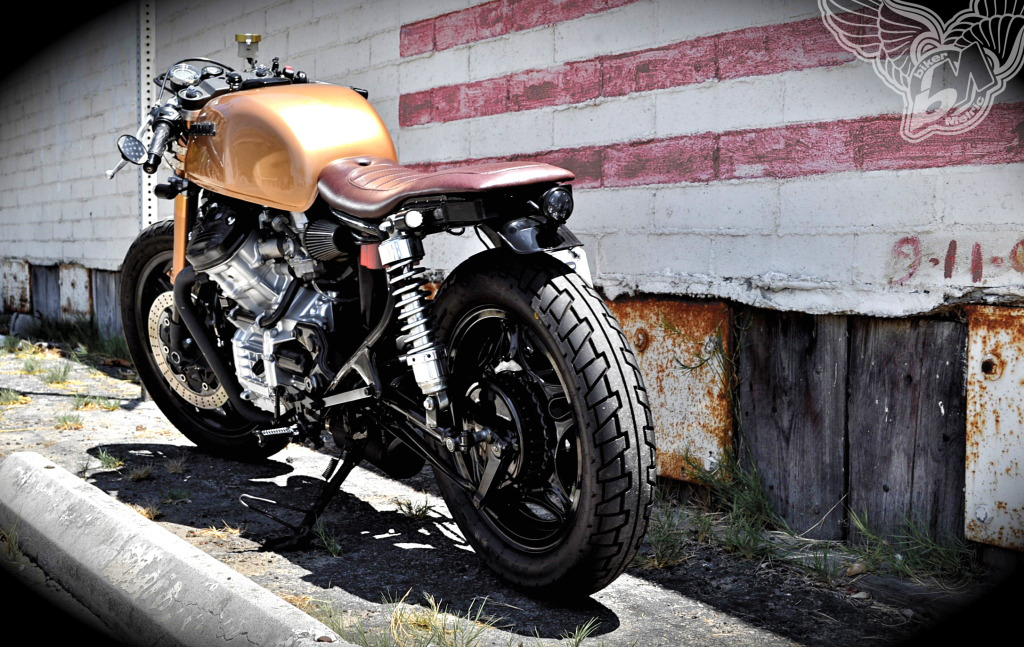