Home / Uncategorized / places to see and people to go

places to see and people to go

i apologize for the dearth of posts lately (one a day instead of two or three) but sometimes a man’s personal life needs to be attended to, and a blog with 1,100 viewers a day becomes just a hobby.

it’s going to be a busy week.

in the meantime, here are a couple of events to check out. the first is next month and the other in april. i was invited to spike’s by steve from heavy but man, there is no way i can make it to l.a. any time soon and honestly, i’m not sure i want to (having lived in l.a. for a decade of drugs and rock-n-roll craziness makes the thought of a return kinda freak me out), although there would probably be quite a few local folks i’d like to hook up with. it looks like i’ll be pretty embedded into new orleans for a while until something miraculous happens and i gain the ability to travel a bit and meet all the folks i’ve had the pleasure of speaking and emailing with in the past year.

this next poster is for a party being held by kutty at hippy killer. for some reason a few weeks ago i got a friend request on facebook. i know! nobody wants to be my friend because all i’m gonna do is spray paint cryptic s**t on their walls. but kutty was asking and i was yesing. so if you’ve got nothing to do next april 16, head out to winchester, california, about half way between anaheim and indio, and dig yourself some hot rods, custom chops and bobs, rock-n-roll, and maybe something more artery-clogging than steve’s bacon-wrapped hot dogs.

might i suggest a deep fried double cheeseburger with cream cheese topping. yes. that’ll kill ya. better have a pbr handy to wash that down.

the bikerMetric ******** kitchen will be open soon. come for the deep fried, chocolate-dipped twinkies, stay for the soft toilet paper in the restrooms. 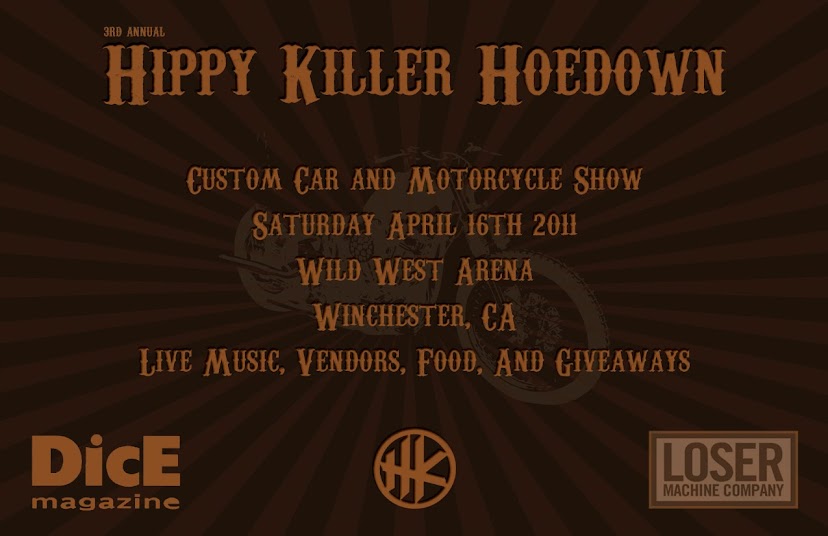 Previous: thanking the noobs
Next: heads up – disco volante moto and howard davies better do right