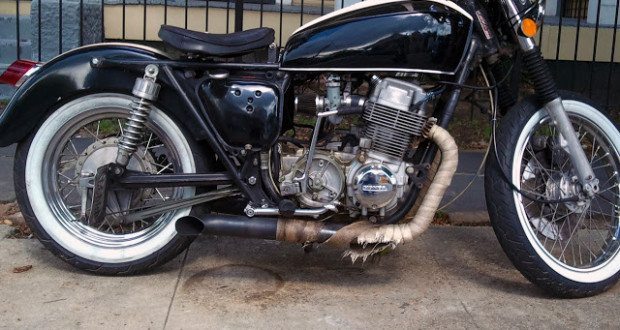 found this bike rolling down magazine street yesterday. looks like a mid-70’s honda cb750 made into a bobber with cafe racer styling that seems to get a lot of work on new orleans streets.

some b**ch had left a fresh piece of chewing gum on the seat. i cleaned it off as best i could after i took these pix. dig it. 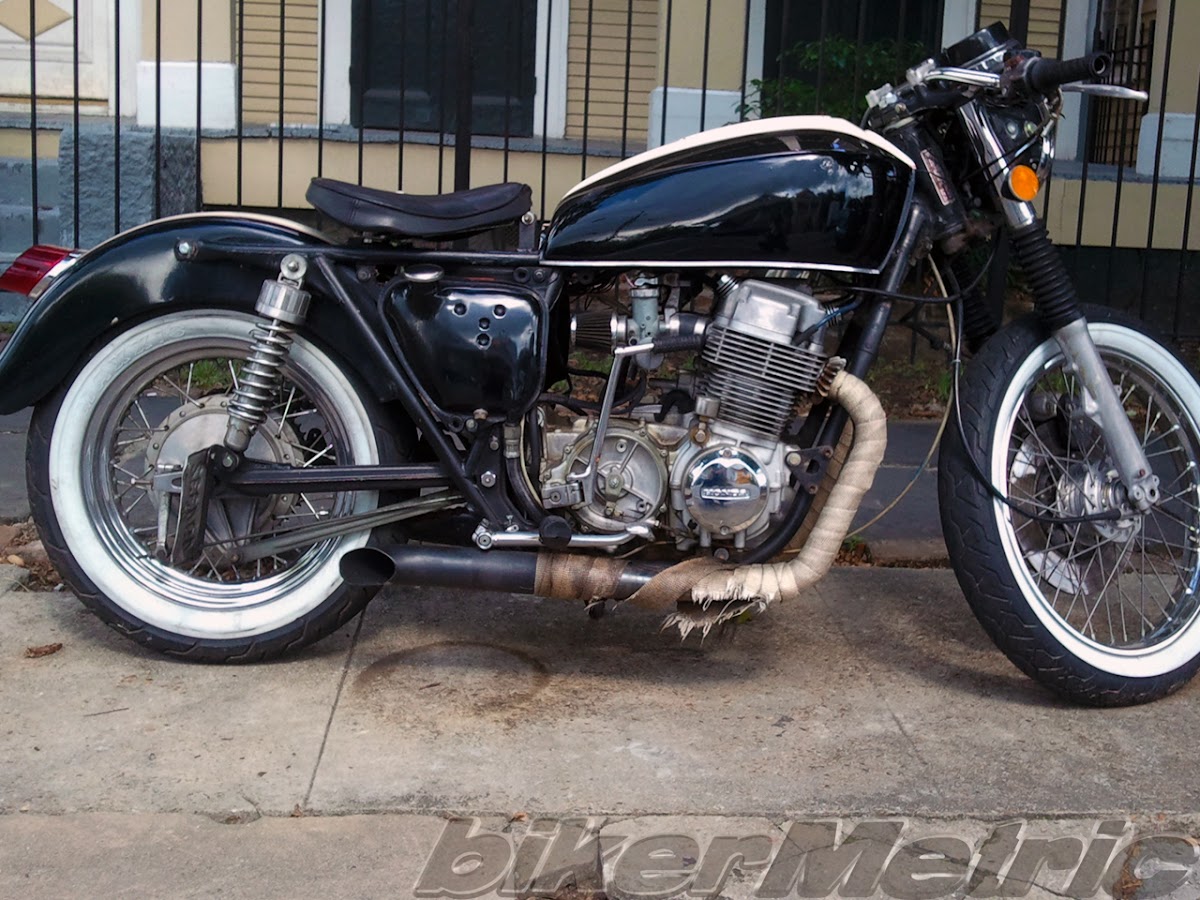 there is a discussion about what makes a cafe and it seems that unless it has the one piece seat/fender combo it isn’t a cafe. interesting.

everything is a bobber. from that, call it what you want. many say the bobber dates back to the end of world war two. others reach farther back and say dudes were bobbing bikes in the 1930’s. really? they had to have turn signals and federally-mandated exhaust systems then? give me a break. that sh*t was bare bones. *** forbid our governments let manufacturers build those death machines today. we can’t choose ourselves! our pipes are too loud! our women show their **** too often!

in truth, the bobber bike was birthed during and at the end of the war because guys who had just spent a few of their formative years in a brotherhood where you risked all for your pal wanted something more than the new united states offered. the society they returned to wanted them to buy homes, drive giant automobiles, get a respectable job, and move into the ‘burbs to spend their weekends mowing lawns and having bar-b-ques with their corporate neighbors.

the bobber was born by the hands of men that wanted to stick it to the corporate man sixty five years ago. they wanted to ride and do it as fast as possible. they were used to risking their lives so fenders and safety equipment of any sort were bull***t adornments for college educated *******.

i was chained to a bench for eight hours after that remark. 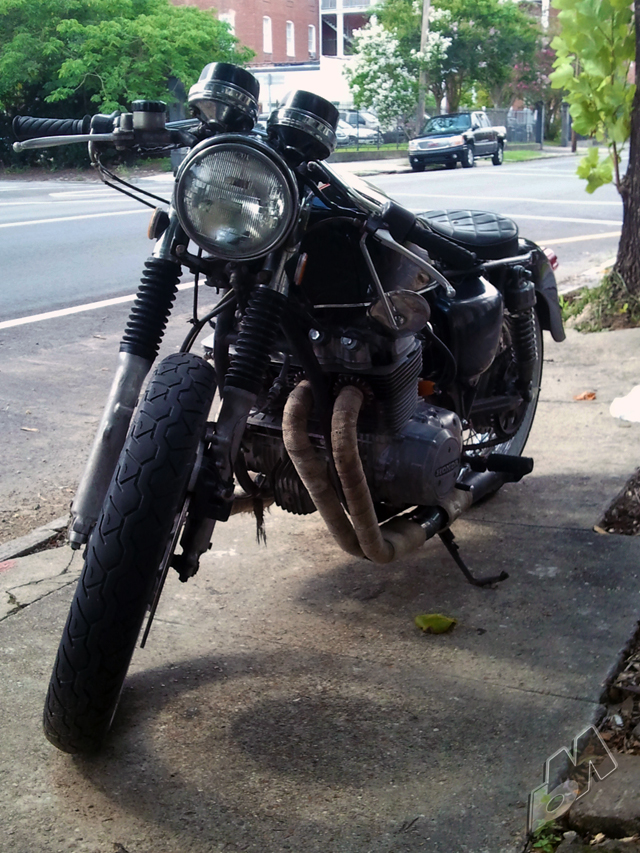 the easiest way to make a bike faster was to chop weight off it. after that, anybody with some mechanical skill could bore motors, tweak carburetors, and generally hop up their bobber. most of these bikes were raced on dirt or up hills. not queer british hills with pavement and street suspensions. the first bobbers ran up 45 degree-plus hills on dirt with rocks and s**t all over.

from this need to chop and bob, to be lighter and faster, came the cafe racer. a typical cafe has “ace bars (clip-ons or any low handlebars),” a gas tank with all chrome and badge adornments removed, and a “hump seat” stolen from the race bike designs of their day in the 1950’s. some purists call for specific or new shocks, “bell mouth” carburetor intakes, and a shortened front fender.

a fender? isn’t that what the goggles and guy fawkes mask is for?

to me, a cafe bike is simply clubman bars and some bobbed off s**t. i had no idea one had to ride a “hump” seat/fender but, from what i’ve been told from those “in the know,” it seems it is this mod alone which makes or breaks a cafe. without it, it’s just another bobber. 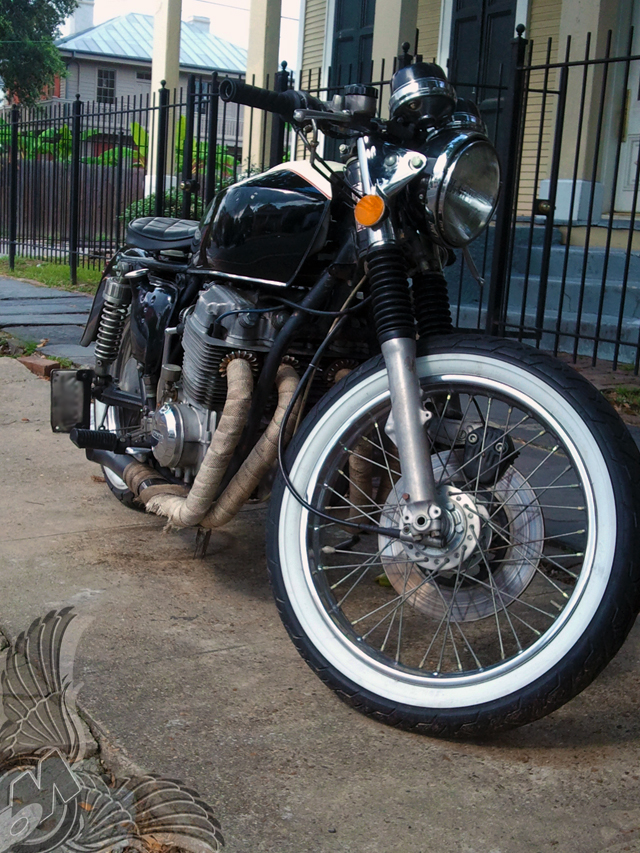 i’ve read the words of a guy from hollywood who says cb750 cafe racers are ridden by “douchebags.” i’ve read other opinions where a cafe is this and a cafe is that. same with choppers and bobbers and **** ***. there is only one way to do it, according to some.

i don’t care. do i lack credibility for leaving it up to the builder or the rider to define their machine?

so here you go; a “cafe-styled bobber” from nola. motherf***ers. 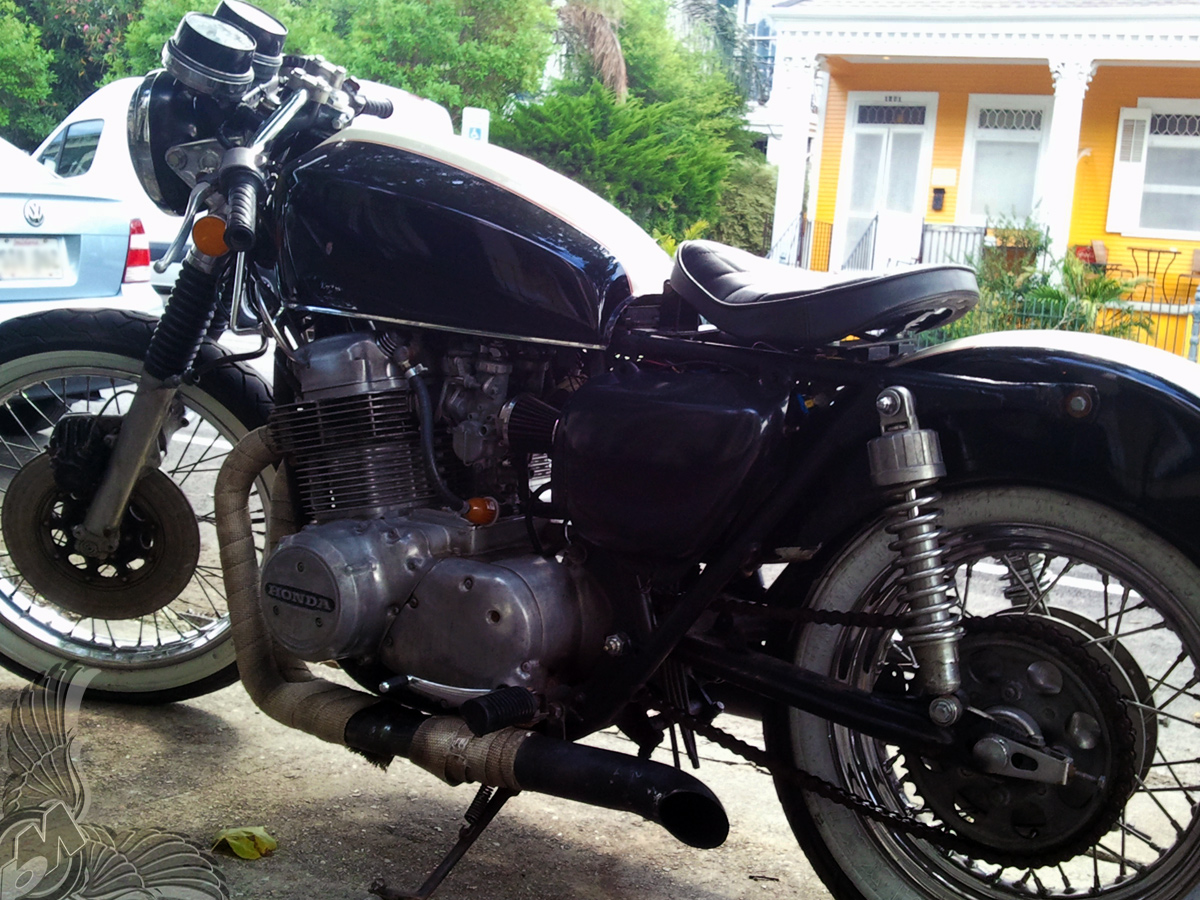