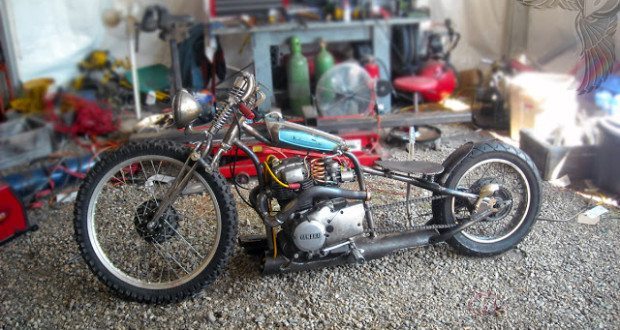 somebody sent me a photo of this bike on flakebook a few days ago and i loved it because, as you all know, i dig swap meet ****. 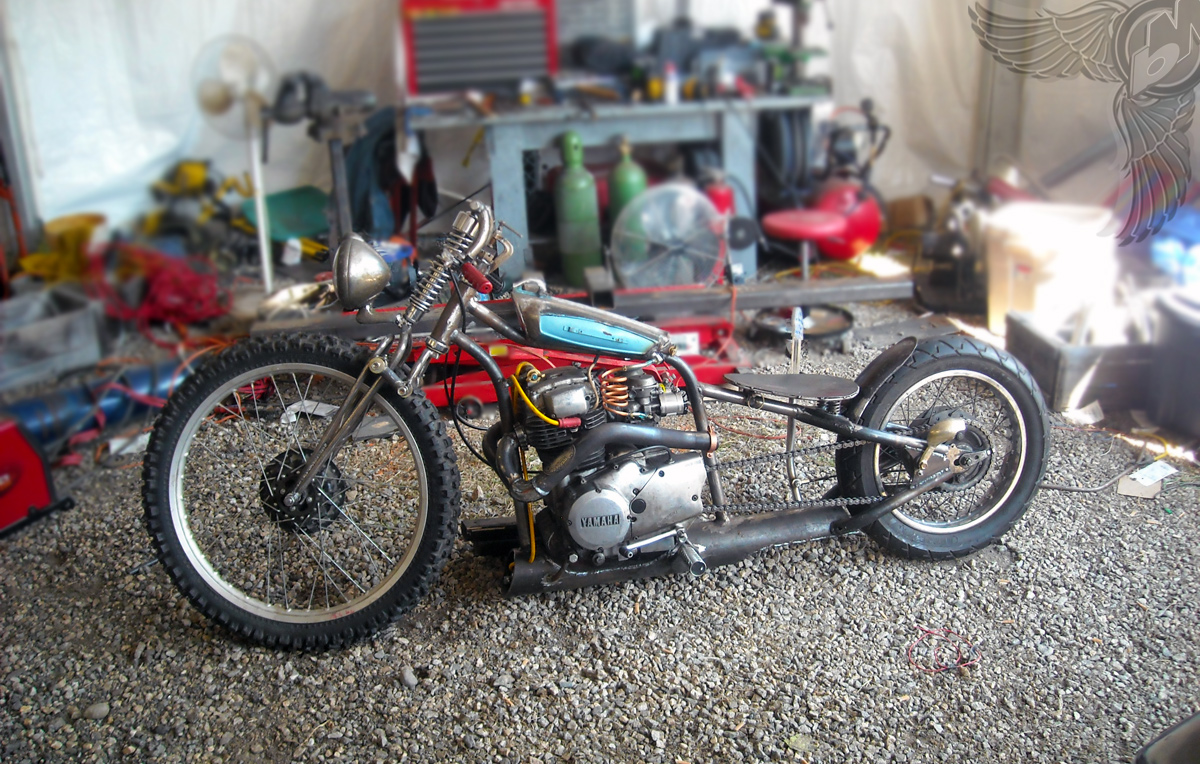 this metric chopper epitomizes that style and since sixty thousand of you sick bastards visit bikerMetric every month, i figure you dig them, too. i sent a message to the builder, mike painter from masshole moto (check out that link) and asked if he’d like to send me some build info and some big pix. he readily agreed for some reason and here it is; a 1979 yamaha chopper built for about a dollar and called “the pipe dream.”

the following story was written by mike:

It went down like this…. Andy, Paul and I took our bikes up to Boston for the World of Wheels in April. That Saturday, I was drinking some beers in a lawn chair by the bikes and this guy named **** comes up and says that he runs the Bike Build Off at the Lobster Pound in Laconia, New Hampshire, off Weirs Beach. He said one of the six shops that were coming for Bike Week had backed out at the last minute and that he had been looking at our bikes all day and thought they were very interesting. He wanted to know if we would fill in the vacant space for the contest. I told him I’d have to ask the other guys but it sounded like a blast. Two days later I talked with the guys and called **** up to tell him we were in.

Now, we had about two months to make this happen, and not much money or materials to do it with. We started with a cheap 1979 Yamaha XS400 cafe I whipped up to try and sell a month before. We would rip it around the street in front of the garage for fun so we knew it ran, and since we had no money for anything else, it was torn down and became the heart of the build off bike. The whole bike was cut up and the motor, rear wheel, and stays were the only things used from the cafe build. Next, we had a pow wow to see what we could come up with. We had been doing a shop night on Tuesdays so we kept it going and did it all on Tuesday nights only. Later, we began working on Wednesdays but not on any other times. This bike was built in eight or nine nights total. I worked to find a few sponsors who were into it and with the money that was raised we were able to get enough supplies to continue the build. 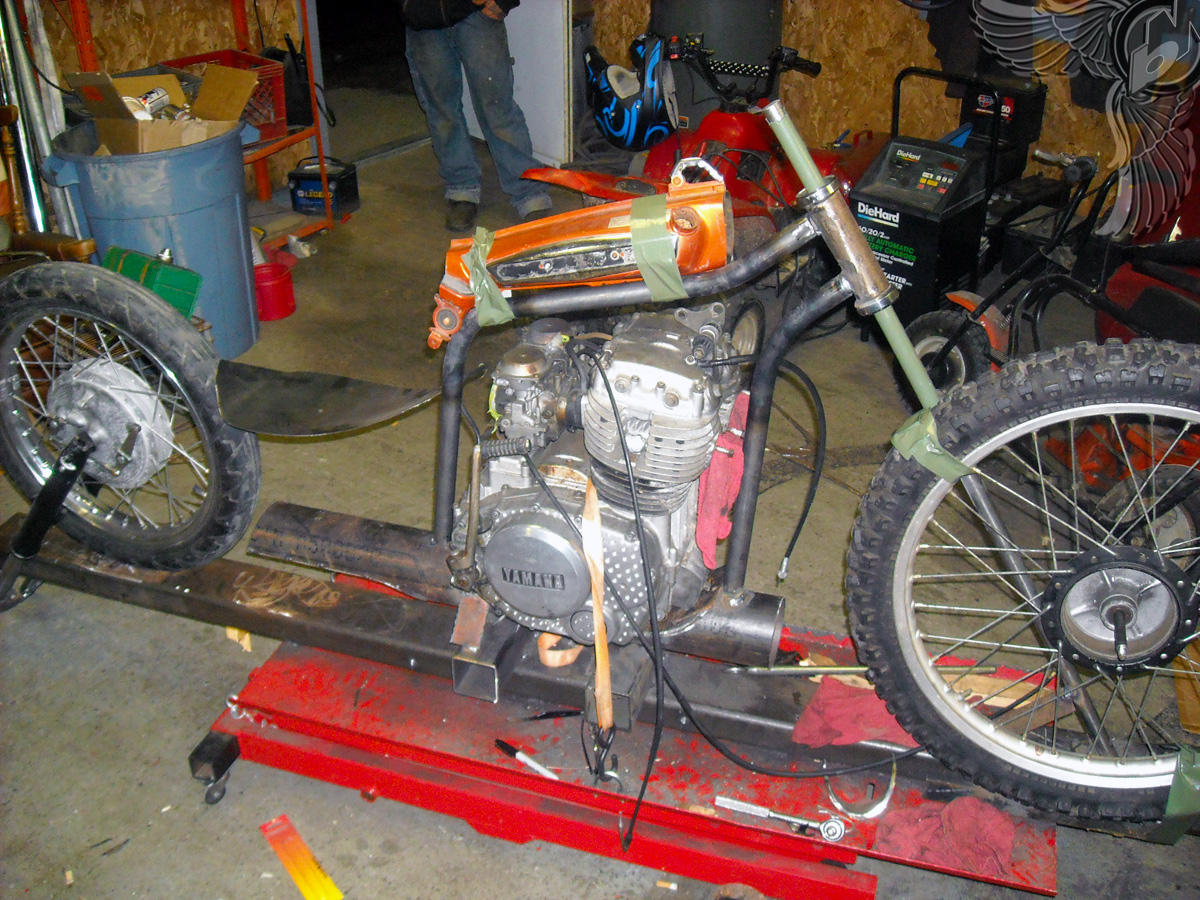 Paul and his brother John started with the 4 1/2″ piece of pipe that was used as the base of the frame while Andy and I were at a meeting. We then got the neck on the down tube and the back bone on. The bender we were using was flattening out the tubing we had so we got out the torch and bent it around a tractor trailer piston on the welding table. Next, we started on the rear end. The design changed a few times and again we were heating and bending the tubing all by eye. 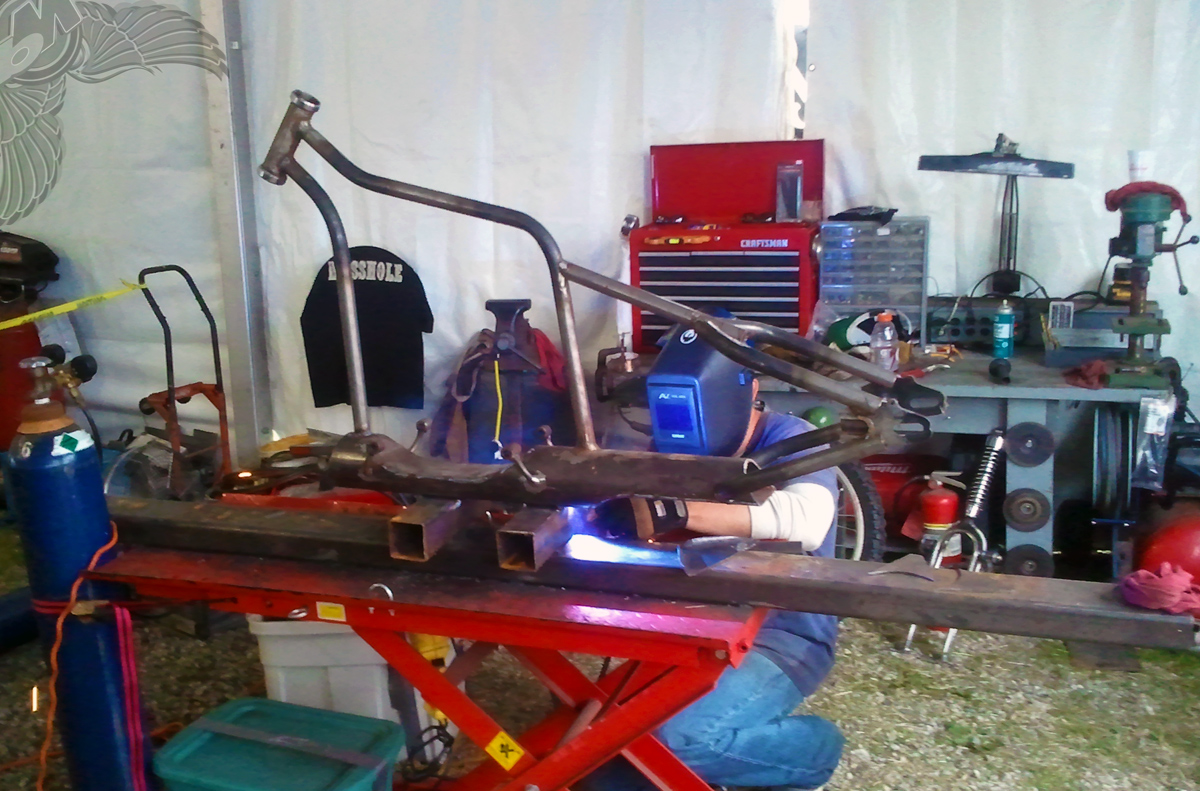 The seat became Matt’s job. He used the English wheel and whipped out a solid pan. Andy wanted to do the tank, which used to be the down tube/tank of an old moped he and Matt had re-done for a guy last year. Most of the stuff we used was laying around someone’s house or another. It was all **** that was collected over time. The 23″ front wheel is from an old dirt bike, the throttle is off a mini bike and the head light came straight out of the junk yard last winter. John cast the tail light out of brass the night before he came up to Laconia. The front end was Paul’s doing. He started when we began the frame and finished it the last day in Laconia. He made the whole thing and used an old rear suspension shock for the action. He ended up losing something, a nut or a bolt or whatever, so he used half a C-clamp to finish it off. 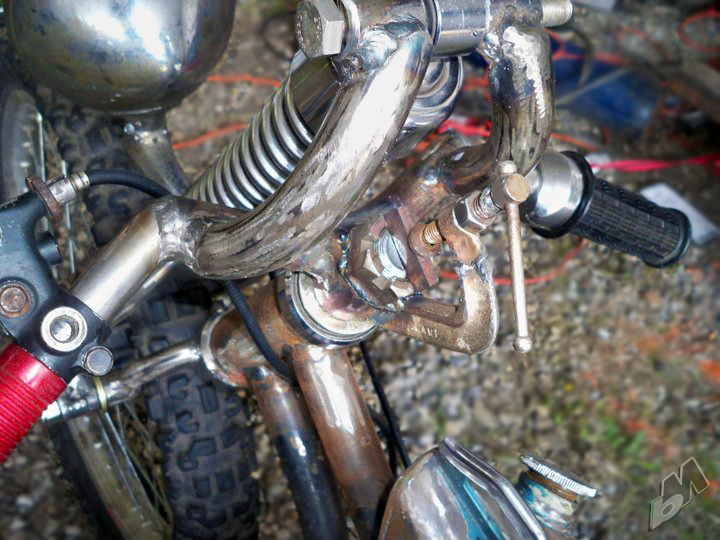 Over the weeks we had it mostly mocked up, with tools ready to go and plans discussed, but time was running out. We had to make it work on the run and we finished welding the frame the first two days up in Laconia while some of the other builders were putting their Lego projects together (IE: A goes to B, C goes to D – you know what I mean). All week long we were making things up as we went. We had brought boxes of steel and other junk and just winged it. On Thursday, John showed up as Paul had brought him in to wire the bike. He made a tray for the fire alarm battery that we used and slid it into the ignition box, then up into the frame along with all the other wires and coils. Somehow, the voltage rectifier was left back at the garage so he went to Radio Shack, got the parts, and built one. The only thing you see are the plug wires coming out of the lower frame and an on/off button under the tail light. 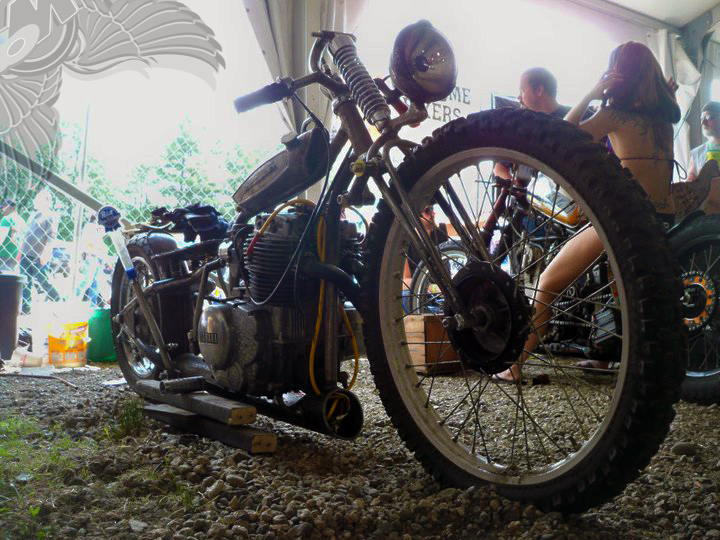 We continued with other things that still needed to be finished, such as the engine mounts, rear jockey brake, mounting the seat and fender, finishing the front end, and mounting the lights. We did this while figuring out the bars, which ended up being 14″ of stainless cut in half and welded straight onto the front end.

After a few more hours of cutting, grinding, welding, wiring, swearing, praying, and drinking, we were done and the Pipe Dream was born! 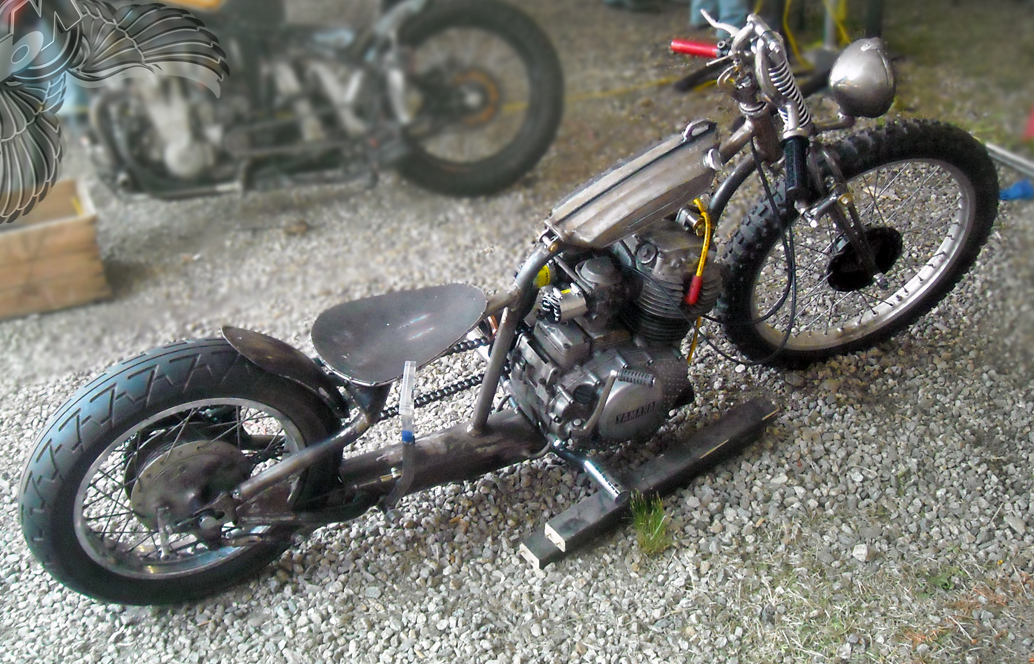 The bike started after 40 or 50 kicks because when Andy leak-checked the tank he left the water in it and when the line was plumbed the turned on it and flooded the carbs with H2O. I got her down the hill, into the tent in front of the stage and back up again with no problem. Some of the shops weren’t so lucky. We ended up with 4th place out of five competing shops (seems another dropped out) and considering we aren’t a shop but simply a few dudes who like to tinker on sh*t, that was just fine with us! 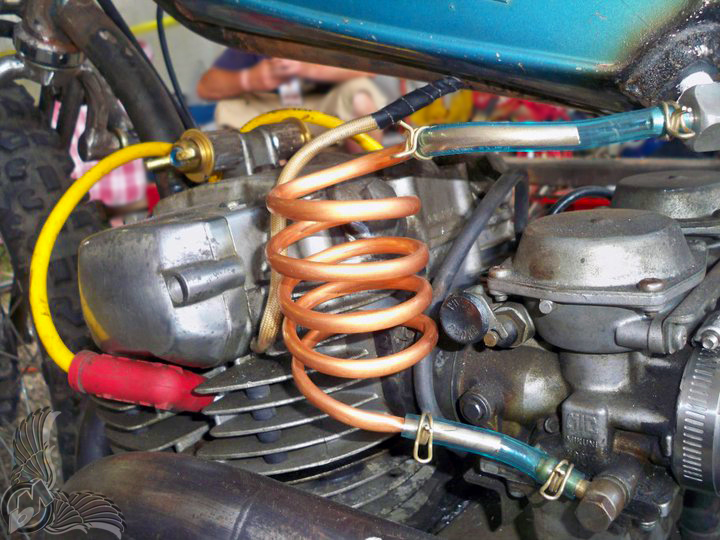 right on, mike. thanks for kicking ***, drinking beers, saying f**k (even if you didn’t write it), and having fun through it all. i’d call your machine a triumph and i’ve got to talk with paul about a front end for the FREEDOM or DEATH MACHINE… 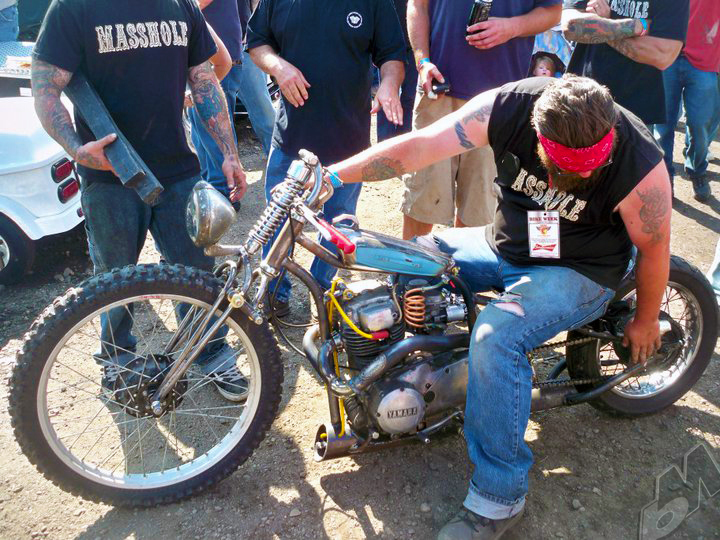 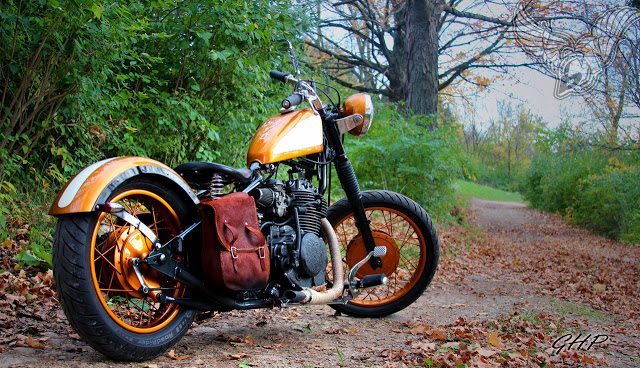 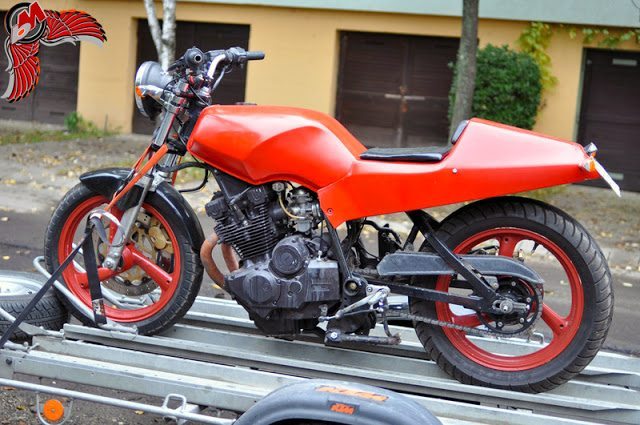 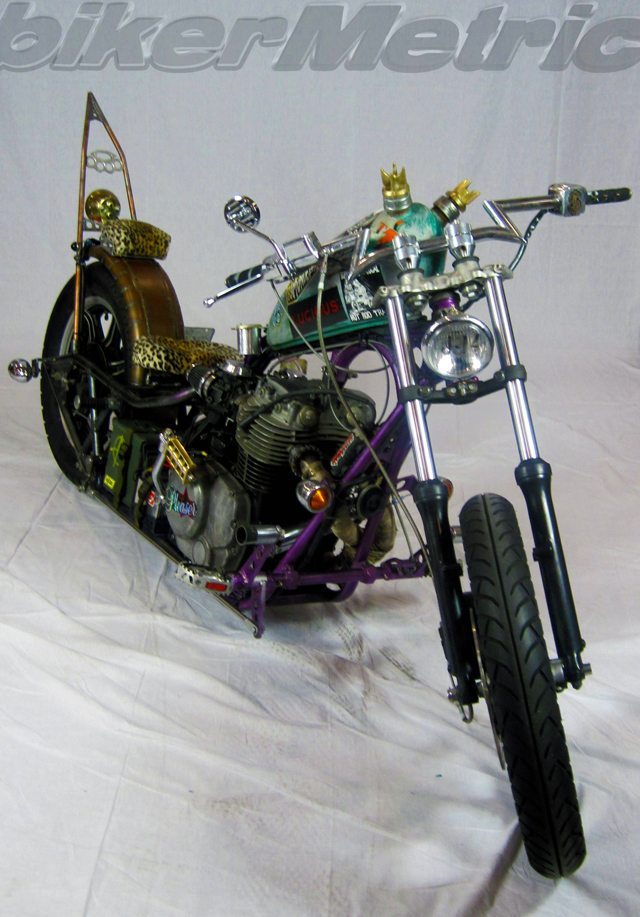 all right metric mofos. blogger finally got it’s s**t together and i ...