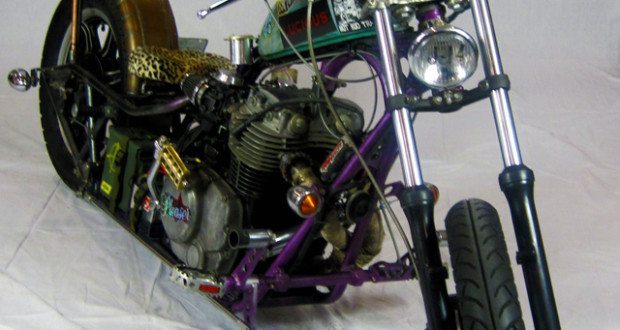 all right metric mofos. blogger finally got it’s s**t together and i can post this crazy and killer bike from canada. i’m going to let the owner of the bike tell you about it in his words:

Hey man. Love your blog and love metric choppers. You’ve got a great thing going on. My name is Cash Driedger and I live up in Saskatoon, Saskatchewan, Canada. I’m part of a group called The Bastards. Not just a bike club, but a custom culture club, rods, bikes, tattoos, etc. I’ve got a blog called Hellorific detailing my bike builds and more. Here are some pics of my first chopper build. I’d LOVE to see in on your blog. 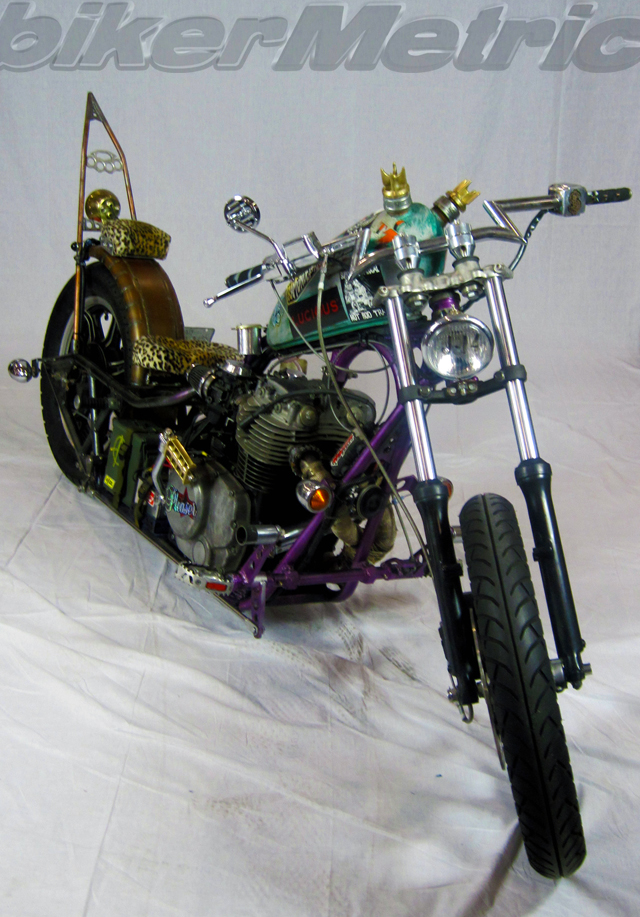 It started out as a wrecked 1981 Yamaha XS400 that I picked up for $400 from a salvage yard. After I got it running, I promptly pulled the engine. I was short on money, but had all the time in the world, so I built a tubing bender (cast the aluminum mandrel myself from scrap aluminum), and a frame jig from salvaged steel. Built a drop seat frame to fit the engine, wheels, and forks. I wanted it low and raked. Kept the original frame neck for the numbers. 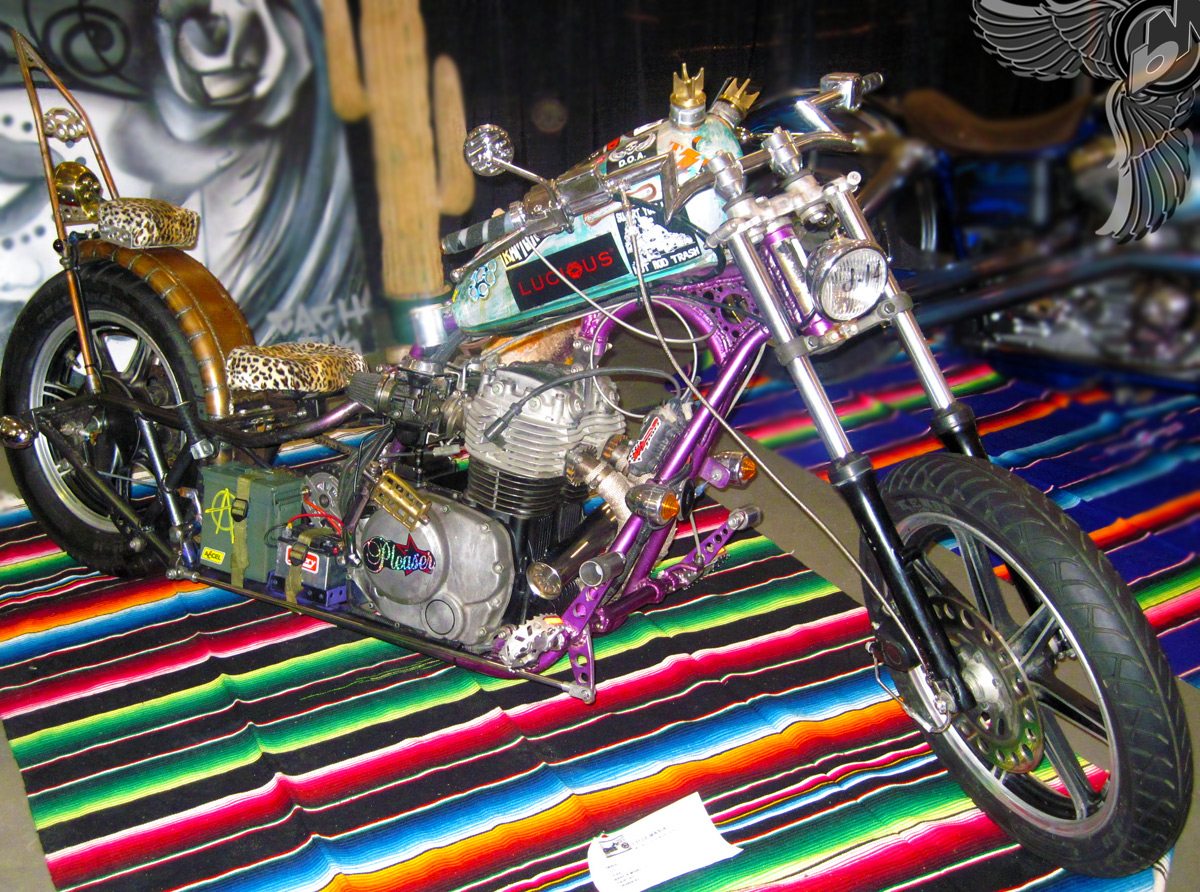 For a while I rode the living s**t out of her until she holed a piston in a spectacular way on the highway last fall. Now she’s waiting under a tarp for the right 1970’s multi-cylinder two stroke motor to come along! I can’t wait to be back on the highway, except this time with an obnoxiousness only a two-stroke can deliver! Here’s the lowdown:

Frame: Built by me, original neck, MIG welded by myself.

Tank: Built by me from original tank and extremely narrowed. Lower tunnel, hump, and dual fillers added. Gas caps made from industrial brass plumbing fittings. Painted, but hated it, so I sanded most of it off and put a bunch of stickers on it.

Rear fender: Built by me from a trailer fender, narrowed and re-radiused. Left it unfinished. 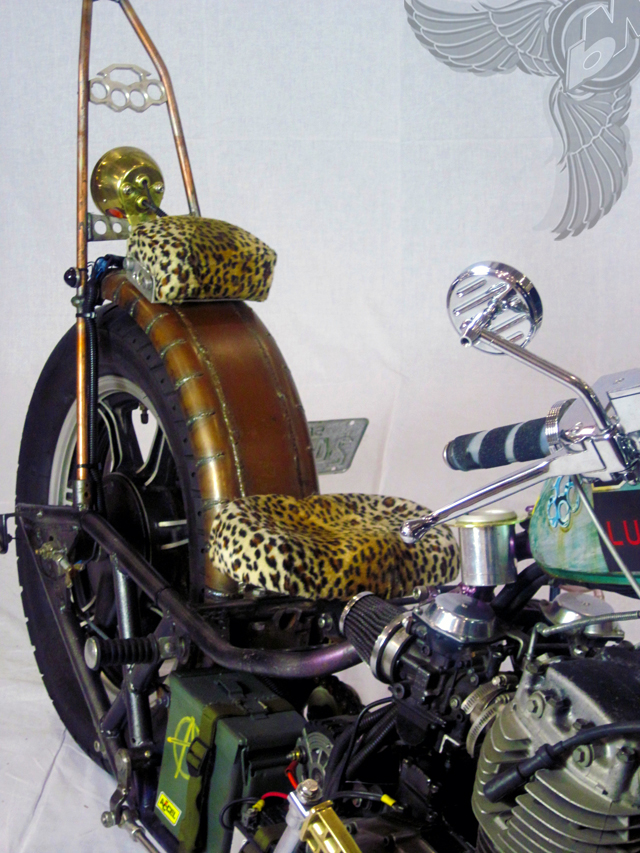 Electrics: Built by me. Did a complete, simplified rewire and used an ammo box. The original charging system had a short, so I built a block off plate with an oil seal where the rotor/stator used to be and ran a chain to an external alternator from a Chevy Sprint.

Motor: Bone stock except for the alternator block off plate, mount and support for the clutch actuator. Speed holes were drilled in various places> It has a Harley kickstarter and new carb mounts to splay them away from the frame instead of straight back.

Sissy bar: Built by me and made from an old copper-sheathed lightning rod. 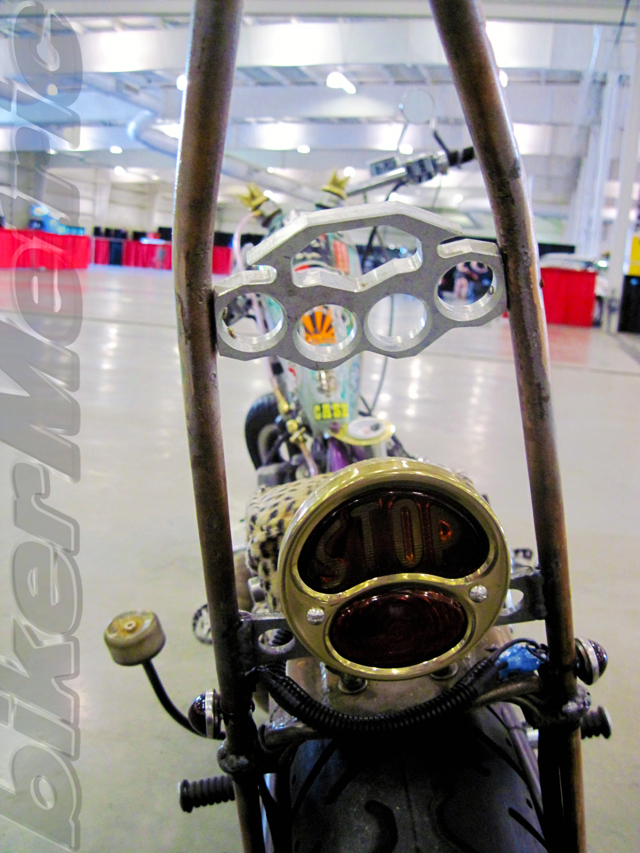 Exhaust: Built by me, original exhaust cut up and re-welded. The chrome tip is from local auto store. Wrapped by me.

Foward controls: Built by me with bear trap pedals stolen off old bicycle.

Brakes, wheels, triple trees: Stock, except I drilled the f**k out of the front brake rotor. Still works!

Suicide clutch and jockey shift: Built by me with skate wheel shifter. 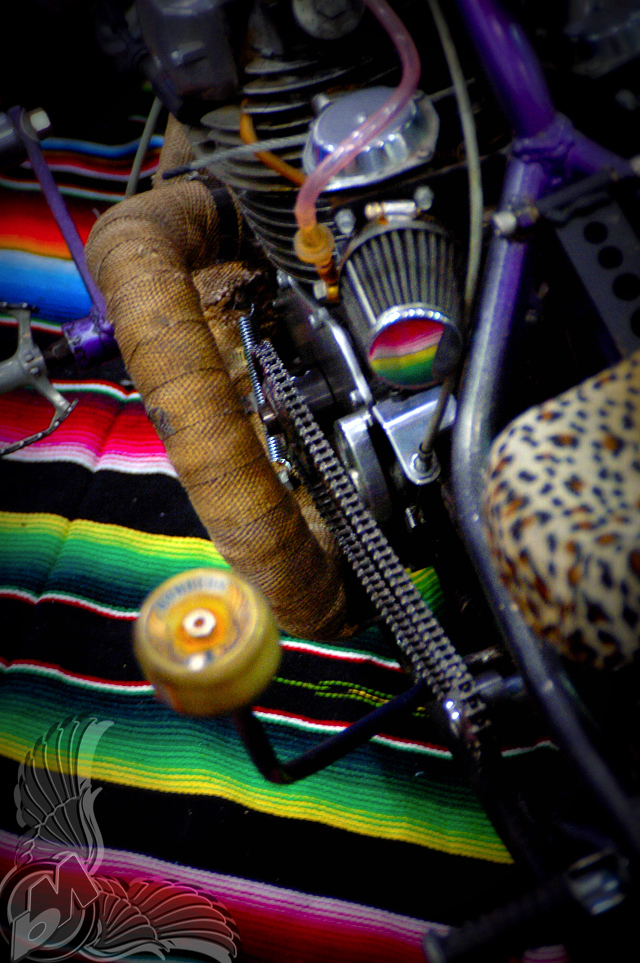 All other assorted brackets and stuff: All done by myself.

A big, big thanks to all my brothers, Bastards Saskatoon.

Check out my blog at Hellorific and while you’re there, take a look at my daily ride; a 2004 CBR600RR streetfighter (also an insurance salvage pickup), and my in-progress build, a classic CB750 chopper that’s 9 1/2 feet long! 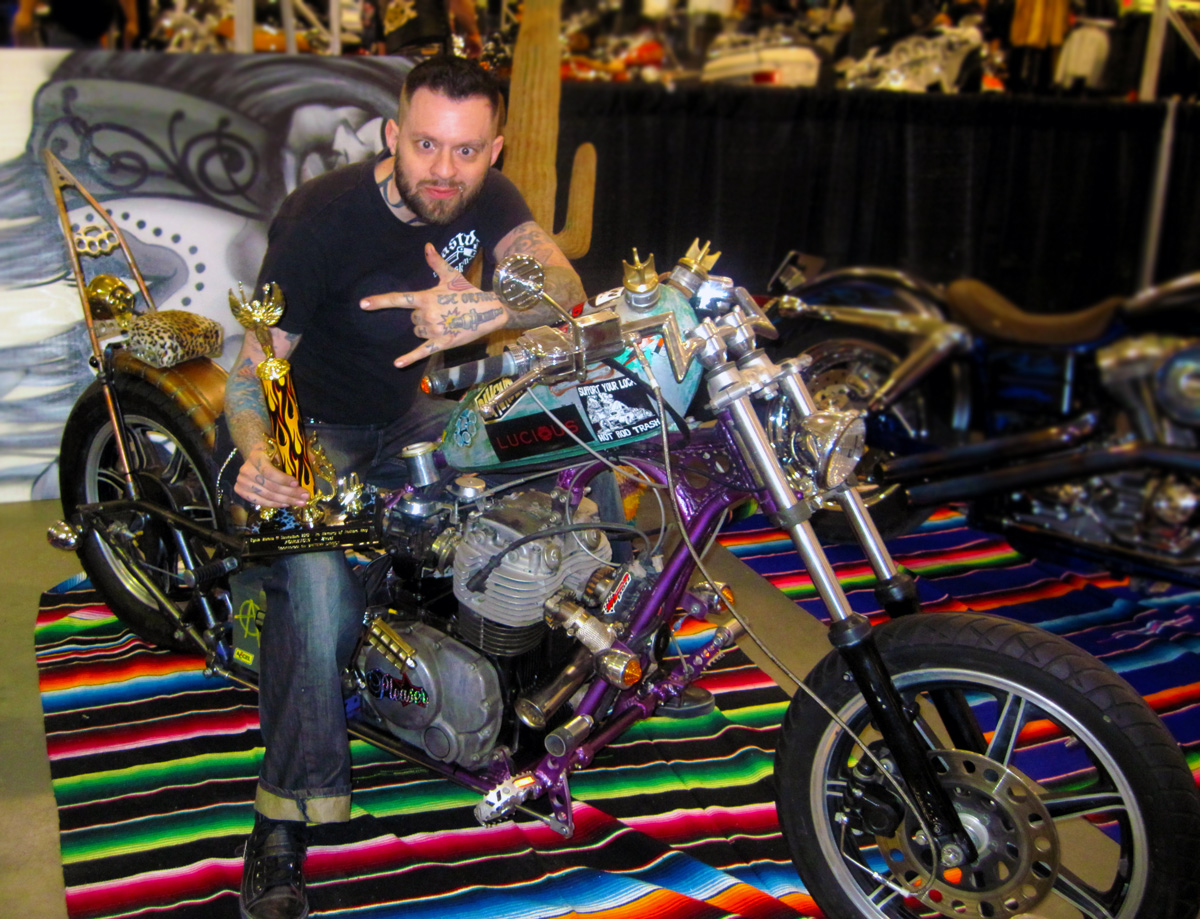 Previous: the pimp & ho tour goes through texas and into new orleans
Next: after the party 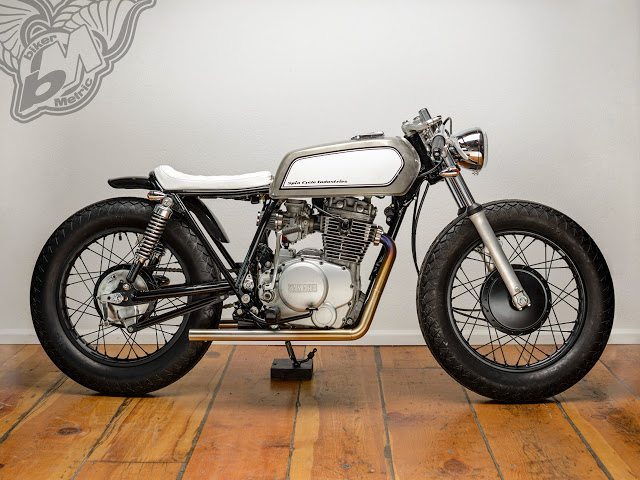