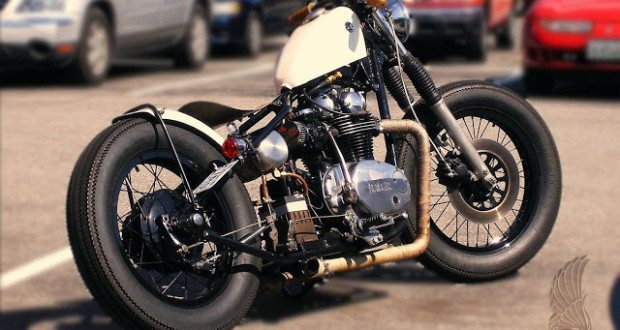 interview with shaun of slingshot cycles

Hey guys, I’d like to introduce you to Shaun Stewart from Slingshot Cycles in Virginia. On my first day as your mad editor, I posted a tiny bit about his CX500 cafe and XS650 bobber and ever since, that page has been one of the most viewed pages on bikerMetric. Number two right now, actually. So I contacted Shaun and asked if he’d like to be profiled here.

After trading a few emails and one marathon phone convo, I found him to be open-minded, funny, smart and ethical. Shaun believes in builders who spend little money on their chop or bob while riding it daily. His wicked XS650 chopper is one of his regular rides. It’s hard to see, but he fabricated switches on the bar ends, inside the classic and rare gold flake rubber grips for the starter on one side and the on/off for the electrics on the other. The bike doesn’t have a key. He ran the wires through the bars and backbone, as well as through the copper tubes that lead to the fake oil tank, where the electrics are hidden. Very clean. 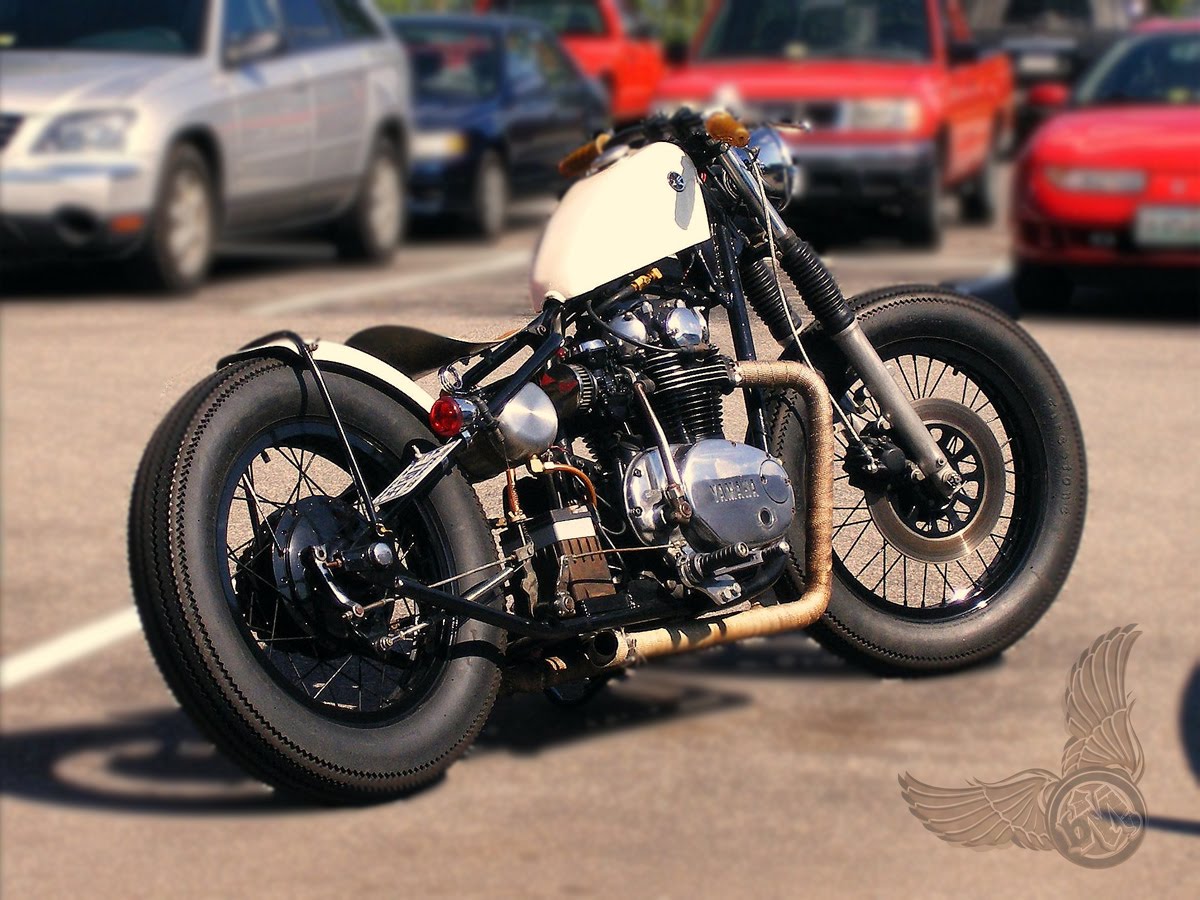 Without further ado, here is the interview with Shaun of Slingshot Cycles, with answers he texted from his phone:

bM: Your website is mostly focused on brake parts and other bits for old Hondas. Do you have a storefront in Virginia where we can come and bother you?

SS: Since I have a full-time job during the day, I’m only able to focus on the shop in the evenings. I call it a shop but really it’s a storage location for my personal bikes and tools. I used to sell other parts like custom CB750 rear sets and more used parts then I do now.

The rear sets took me too many hours to make and by the time I had them all polished and ready, there was no profit margin. It wasn’t worth it to sell them anymore. So I stuck with one item to really focus on, the brake hoses. I bought all the equipment to make and test them in-house and they alone pay for my rent, my habitual drinking, and a little more scratch in my pocket.

About a retail space, no, it’s pretty unappealing. I’ve got a few dirty bikes, cheap beer in the mini-fridge, and a bunch of water bugs all over the place. It’s a little slice of paradise if you ask me but not much of a store front. 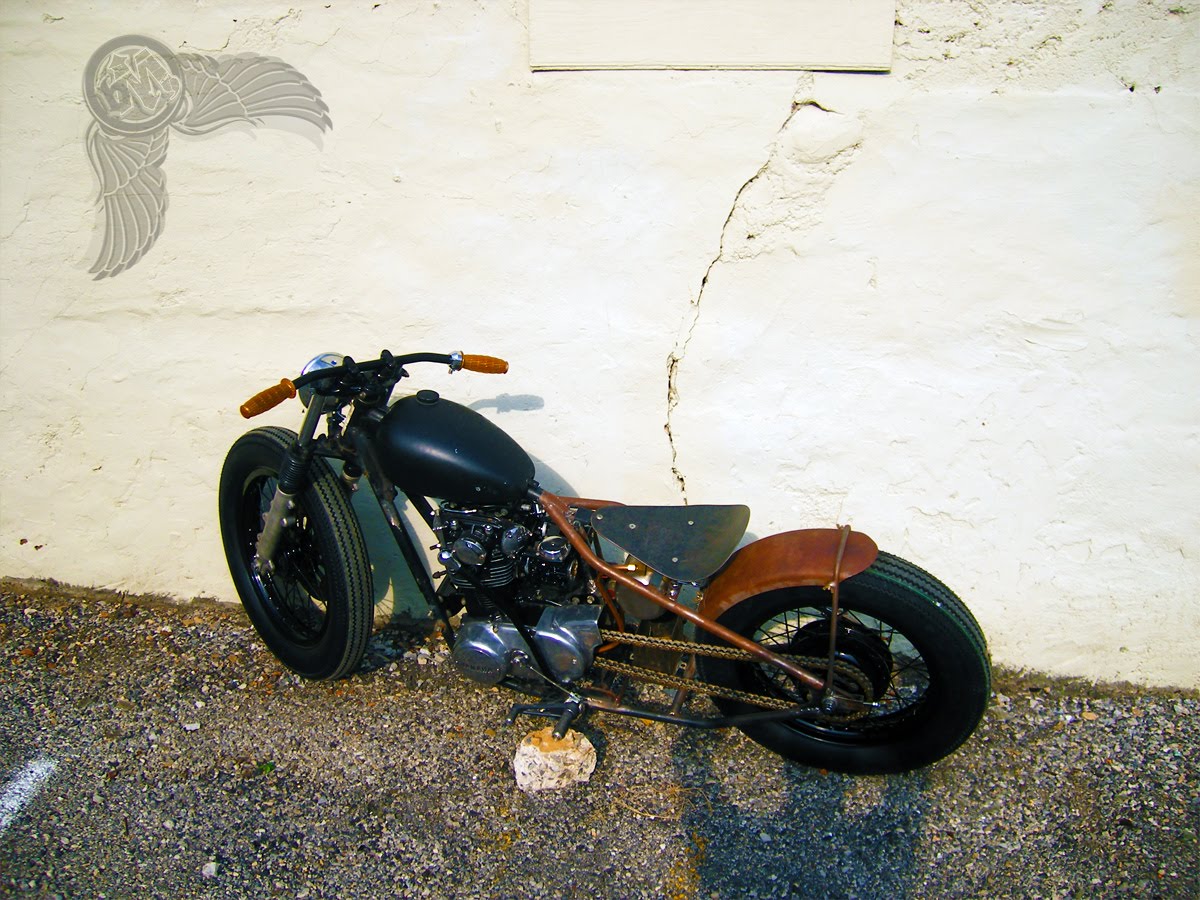 bM: Do you have plans for parts for other makes and models? What are they?

SS: I’m as busy as I can be now. Nothing really in the works for new parts. I’d like to put together a bike or two a year to unload, I guess. At some point I’m going to start making brake lines for the American v-twin crowd. Those guys are stuck spending a fortune on **** hoses made in China for their bikes. It’s kinda *** backwards. I have a feeling they’d like some handmade hoses made in America. 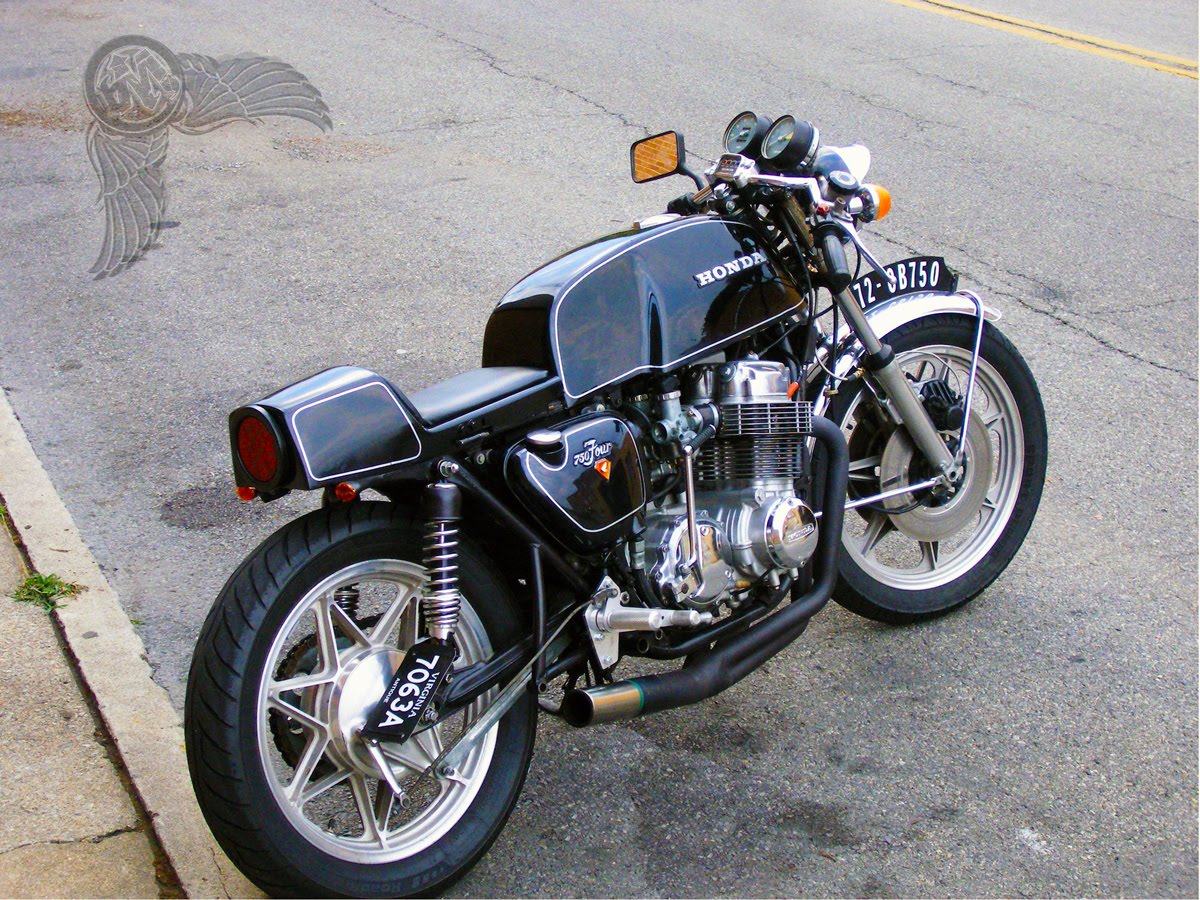 SS: Favorite bike…. That’s a tough one. The bike I work on the least is usually my favorite. I have the most fun on my CB750 and my Daytona. Both are fast as ****, just in different ways. The Triumph feels “new” and has that 70+lbs of torque. Whip the throttle and keep the front wheel somewhat close to the ground and you’re gonna get that “oh sh*t! I’m gonna die!” feeling. I like getting that sensation… in small doses. The CB750 on the other hand, you get hugely rewarded to rev that b**ch to 11k and feel a wallop of Japanese ponies thrusting you down the road. I’ve also had it the longest so there’s the whole comfortable-familiar thing.

The hardtail Yamaha bobber I could ride all day long. It gets a ton of looks and is a blast to ride around town on, but the vibrations the Yamaha has over 60mph make it much less enjoyable on the highway.

So no favorite. But I wouldn’t mind something Italian to keep the water bugs company. 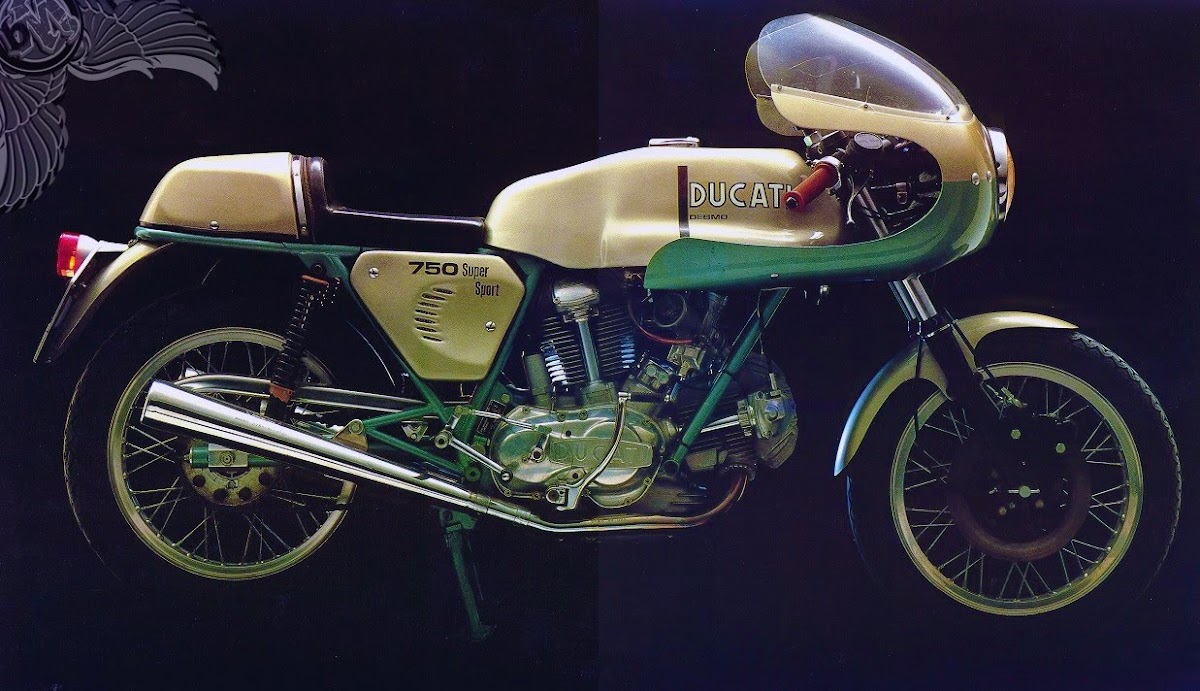 As you may be aware, I believe that beer is a foundational element of revolution and without it, we’d still be subjects of the Queen, plus there would be more polo shirts on everybody. When you take off riding with your associates, what beer do you prefer to drink when laughing smugly at your good fortune?

SS: Beer…. Delicious beer. High Life in cans, Miller Lite in bottles, PBR on tap, Dos Equis with tacos, Guinness at the local pub. If you only drink one beer, your an amateur.

bM: Dude. I think I love you. Do strippers like your bikes?

SS: I’ve never thought about it. I’d like to think that their taste in bikes would be as impeccable as their choice of profession.

bM: Exactly. Strippers rock and so do your bikes. When the end of the world comes in 2012, what should we be riding?

bM: Good answer. I really dig Scott motorbikes. In early March I put a nice image of a 1929 Scott Sprint Special in a Friday Cool Stuff post. To lower the temperature on his 596cc two-stroke Scott employed a unique thermosyphon convection cooling system, which was at the time an advanced method of passive heat exchange based on natural convection to circulate oil without a mechanical pump.

Here’s an image of a 1929 Super Squirrel that was once owned by uberman Steve McQueen and painted by Von Dutch, who got the date of the bike wrong on the fender plate:

What future plans do you have for Slingshot?

bM: Make sure you’re always drunk, too, and that you smash stuff all the time. I would totally never watch that! 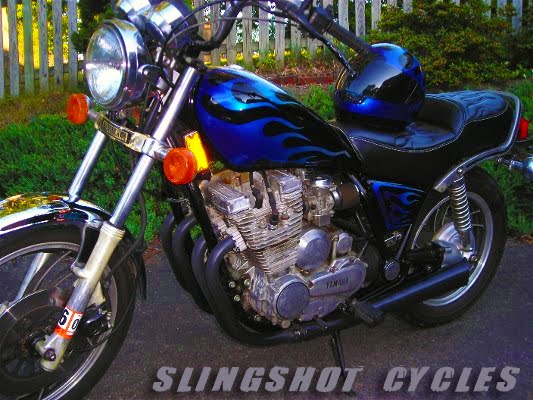 Shaun is working on a couple of new projects right now. First off is this XJ650 he’s turning into a “street tracker.” He has put only $600 into it so far. He lowered the rear of the tank, changed the *** up, and added his rear sets. All he needs to do is polish the covers and add a seat. 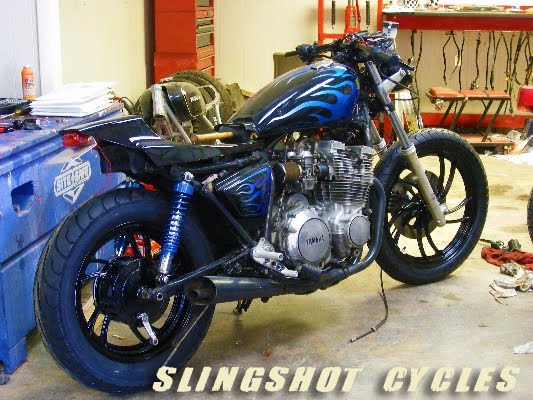 He’s got another XS650 bobber coming up as well that will be all black with sportbike tires and the original mags. Nice.

Be sure to visit Shaun at Slingshot Cycles for American made brake and clutch stuff, fiberglass cafe racer tanks, and even Slingshot-branded Dickies jackets.

And he’d dig building a bike for you.