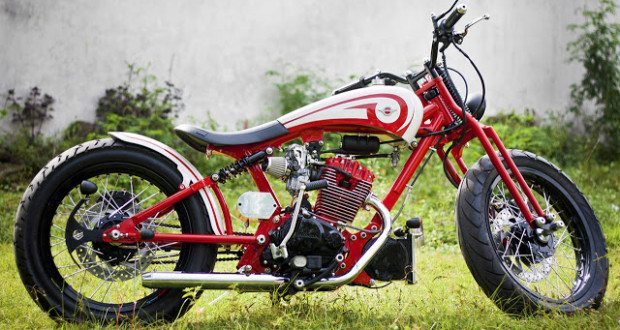 all righty. didn’t see the 13th attempt coming so fast, did you? dig the bodywork. it flows…. 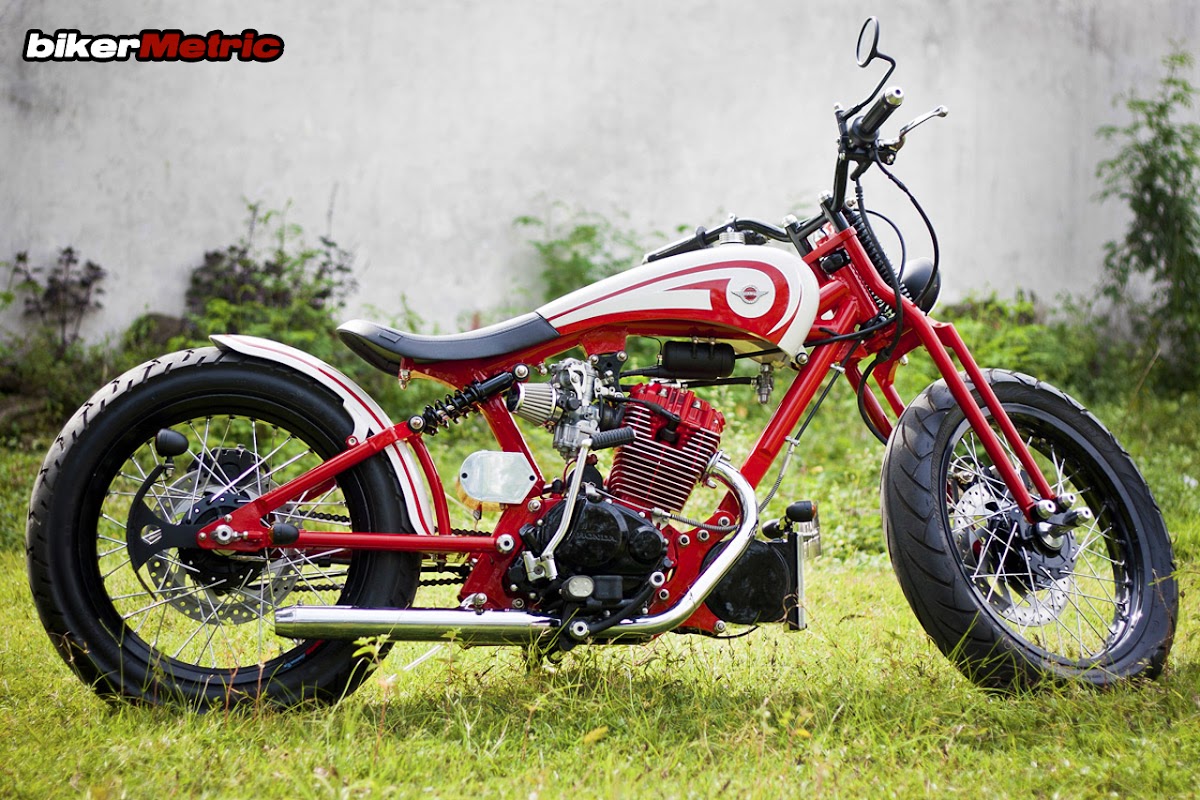 faiz from dariztdesign emailed yesterday, one day after i’d posted their unique kz200 cafe racer. he sent some info and asked if he could share this bike, the 13th attempt, with another website at the same time, which would have been yesterday. 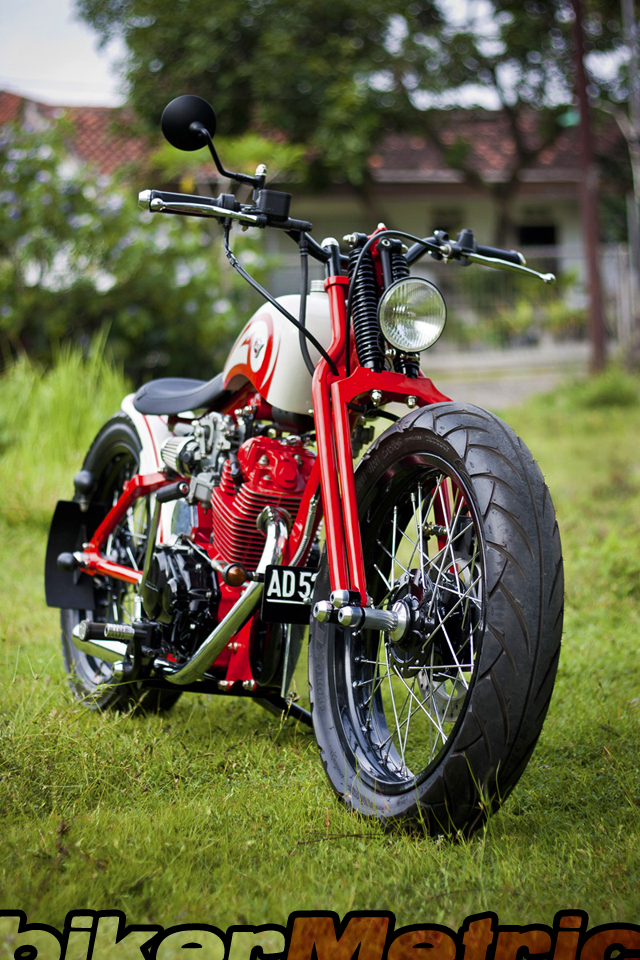 i didn’t have the time to do it. besides, we’ve been here before. twice. the editors of bigger biker blogs read bikerMetric and try to out-scoop me. hey, it’s rough out there and competition comes with the territory. i read and research for too many hours every week, trying to find the next cool thing but so far, besides my mate robbie, the guys at darizt are the shiznit. nobody else comes close. the bikes agus, the builder at darizt, creates are always gorgeous and most of them have some incredibly unique suspensions and body design.

while i’d first posted a sketch of this cb125 bobber seven months ago, all i had going was another cb750 cafe racer to post today, which would have been the second in a row, and the third cafe in a row. i know the cafe thing is trendy but give me a break. i really wanted a couple days to find something else before putting up this killer creation.

i asked to be able to still be the first to profile their bikes but i needed a couple days, and thankfully, the agus and faiz remember how i found them and exposed them to hundreds of thousands last april, and what it’s done for their business.

according to faiz, “you’re the first person that give us courage to keep this job, not too mention bring a lot of people from around the world to know us. endless thanks from us to you. although we’re not a fancy and fully equipped garage, it means a lot when our work is appreciated from people that keep our spirit up. it’s always been a special relationship with you, and i think you’re the top priority.”

not a builder in the world has paid me a better compliment and it’s for guys like faiz and agus that i work on bM. it was a humbling thing to discover, and i’m not easily humbled. the ego, you know….

so i decided not to wait so long, and get it out there for you and for whatever other site wanted it. everybody wins and hey, at least it isn’t another freaking cb750 cafe. not that there is anything wrong with those, any more than an xs650 chopper (ahem). now that the man love has been expressed, let’s tell stuff about this bike.

it’s based on a 1976 honda cb125 which belongs to a “faraway customer on sulawesi island.” yeah. 1,100 miles (1,790 km), most of which is over water, is far away. it seems the owner of this bike has many nostalgic memories of the original cb125 from his college days in yogyakarta. faiz wrote, “he’s trying to resurrect the bike from death.”

there was nothing left from the bike except the left side crankcase. i’d call that “terri schiavo.” i’d also say it has been resurrected.

first, the engine was upgraded with gl200 parts which included all the wiring and ignition. 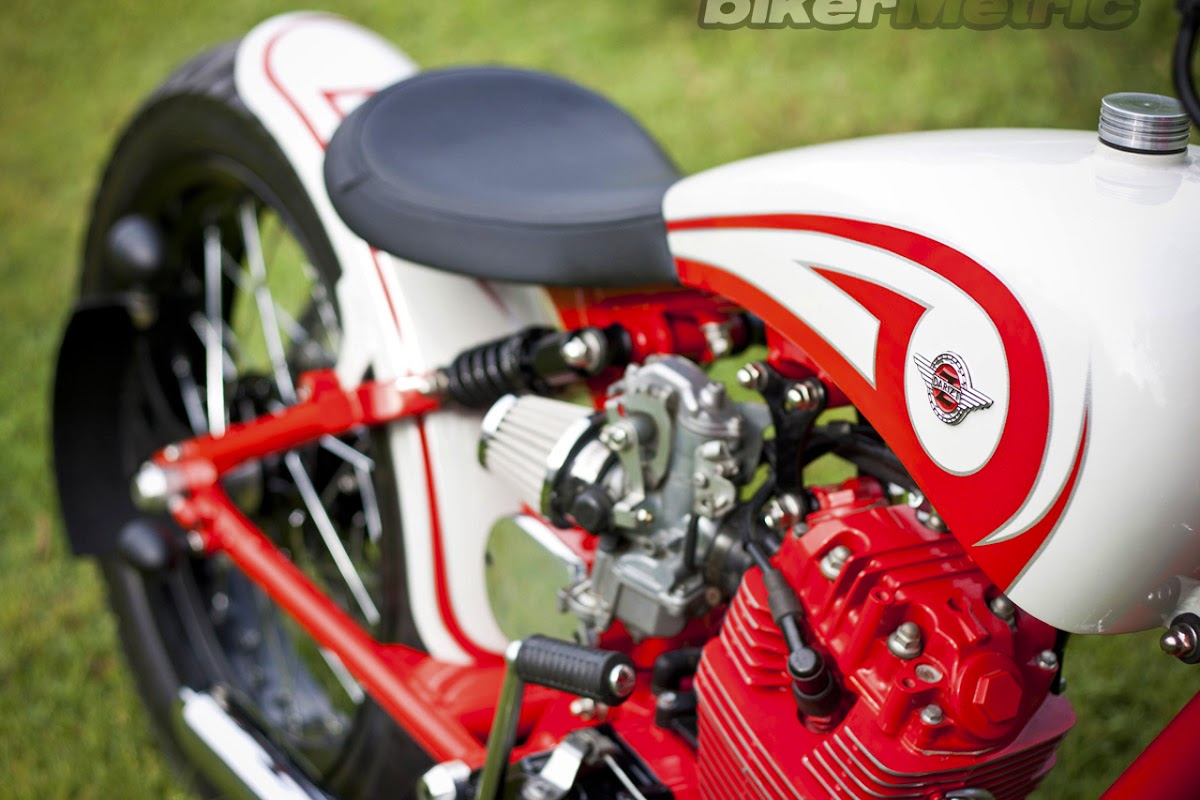 almost every part was hand made by agus, including the frame, tanks, fender, handlebars, springer front end, swing arm, forward controls, and exhaust. i love that suspension. i’m going to build a bike some day with that design. 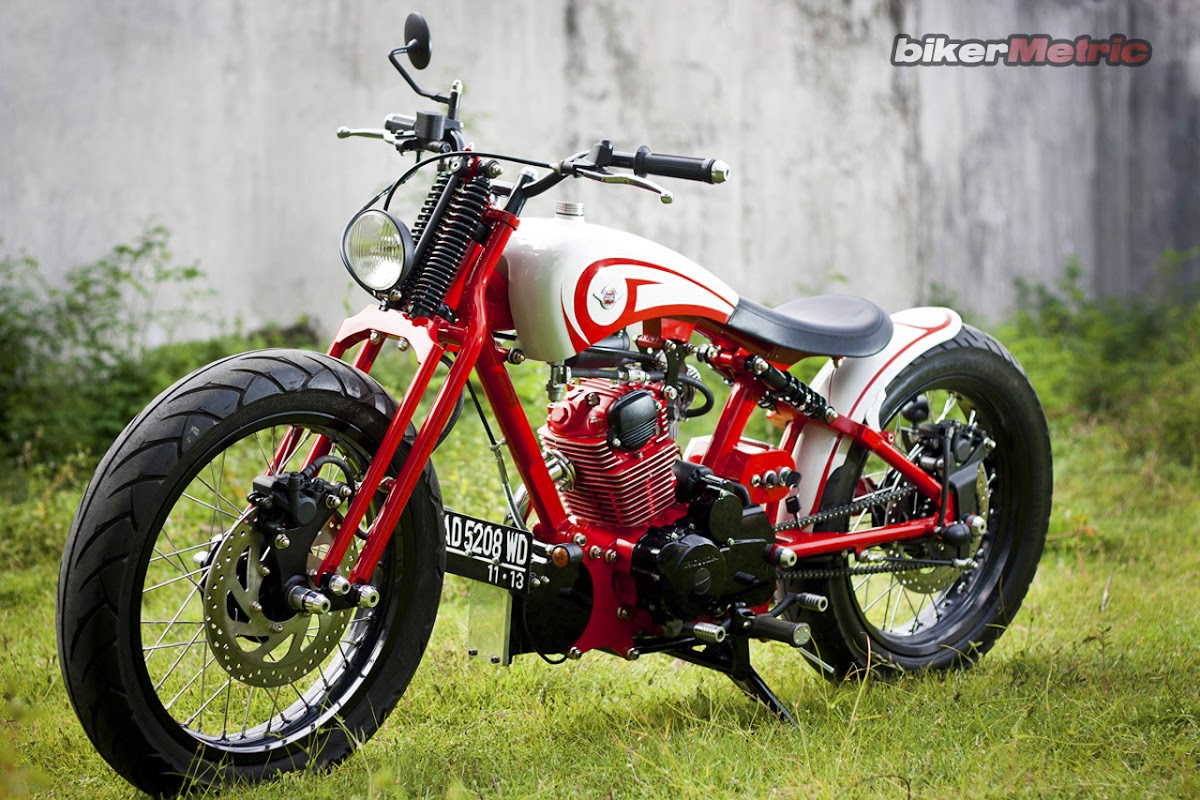 the box in front of the engine stores the battery and multi-functions as a license plate holder and turn signal mount location. 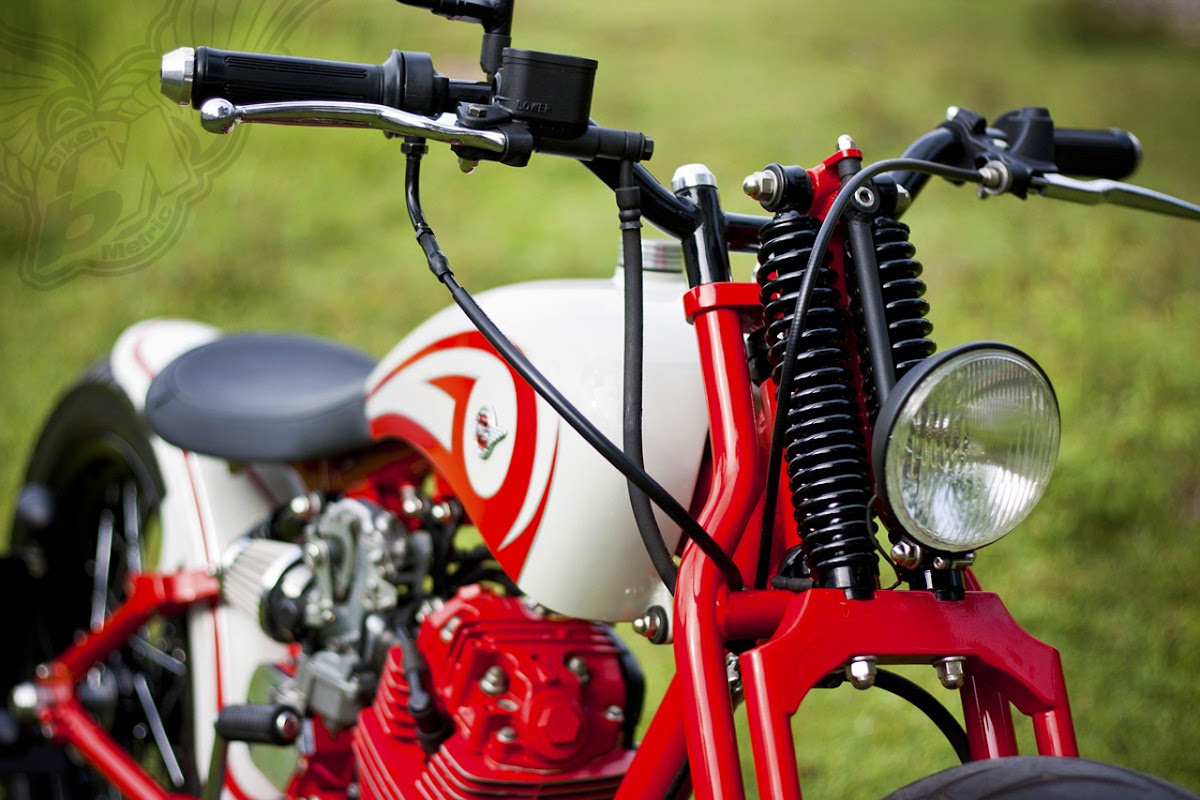 gentlemen, i hope to make it to yogyakarta some day to shake your hands, drink and eat, laugh and tell stories. i am more than incredibly thankful for your friendship and loyalty, and faiz, you guys have a really a great photographer for your shoots. that resource makes a big difference when it comes to showcasing the creations you guys dream and make. great success is coming to you both and those you love. peace out.

be sure to visit the brothers at dariztdesign and let them know you found them on bikerMetric. keep kicking a*s, mofos! 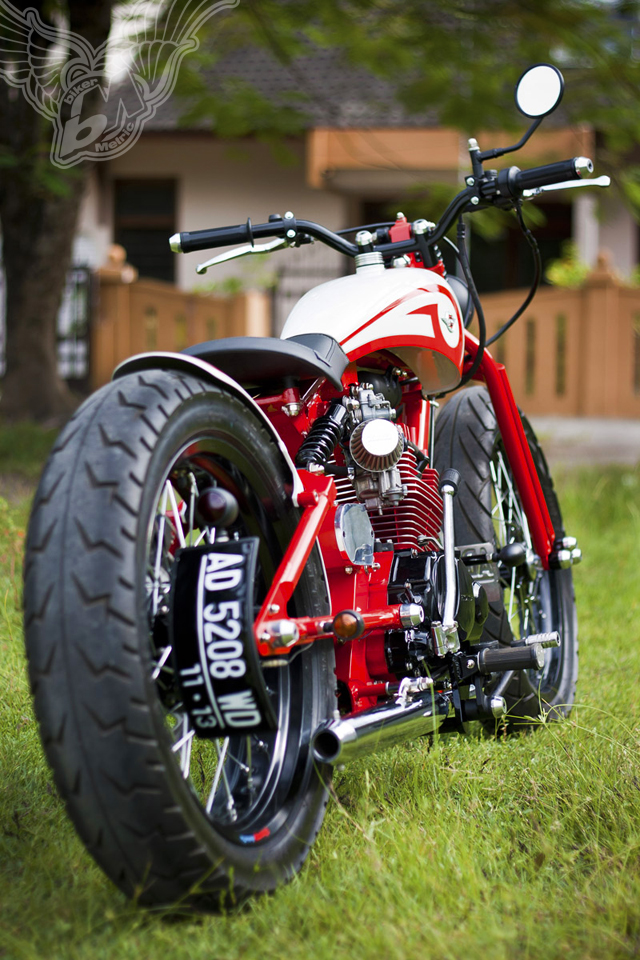 Previous: slick vid from this year’s one motorcycle show in portland
Next: for julienne