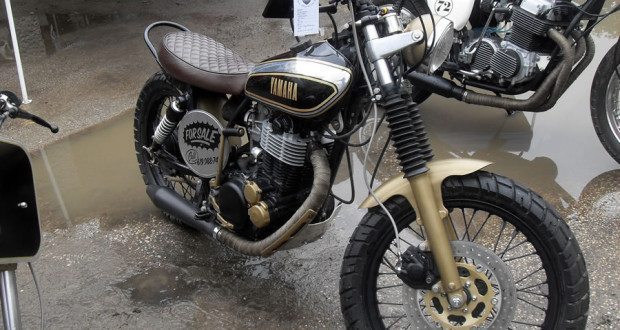 Posted by: Worth Cadenhead in Custom Motorcycle Builder Interviews 1 Comment

I kept checking the weather app on my phone, looking at the hour by hour forecast. Since I live in Texas, the forecast can change multiple times in a day. Finally, it looked like a strong chance of rain early, then it would pass on by. This was important, because parking in downtown Austin in a car is a pain, plus who wants to cage it to a motorcycle event? The event in question was the sixth annual East Side Classic bike show in Austin. I zipped the rain liner into the mesh jacket and tossed it at The Boy, and pulled the liner out of my waterproof winter riding jacket, just in case. We left the rest of the rain gear, wanting to travel light. ****, the kid is sixteen – he’s long overdue for a good soaking on the bike. Which he got. It was bright and sunny when we left the house, but the sky dumped buckets on us as we rolled south on I-35.

It turned out to be a good thing, in my opinion. Rain on the day of a motorcycle event just shows who is really dedicated. The number of bikes entered in the show was a bit smaller this year than the two previous times I’ve attended, but the quality was as high as ever. The crowd was a bit smaller, too, but that leaves room to really check the bikes out more. I have to say, it was a fine grouping of mild restos, cafe racers, choppers, brats and unclassified customs. I took the opportunity to point out to The Boy how they all had scratches, scuffs, worn spots with rust showing through the paint. These are real bikes, built to be ridden, and you could tell they’re ridden hard, and regularly. No trailer queens here. Those all got towed home by the RUBs after the R.O.T. rally last week. A few I recognized from previous years, and some were new (to me). One that stands out the most in my memory was the GL1000 with the flyscreen, drag bars mounted upside down cafe style, and the old school Samsonite bags.

There were also some pretty wildly custom painted helmets from local artists that, along with some other donated swag, were being raffled off. I bought a ticket, but despite my coveted and prestigious standing as a contributor to bikerMetric, I came away without a really cool lid.

The money raised from entry fees, T shirt sales, vendor fees and raffle tickets goes to Austin Pets Alive, a no-kill animal shelter here in Austin, so I didn’t feel bad about donating to the cause.

I met the man behind the event, Russ Walters, and made arrangements to sit down at a coffee shop in legendary South Austin and ask him a few questions:

bikerMetric: Tell us a bit about yourself. How long have you ridden? Have you always been into the older bikes? What do you ride currently?
Russ Walters: I’ve been riding about eleven years or so and my first bike was a Royal Enfield.

bM: Older or newer?
Russ: It was a newer one, and that kinda got me into café racers.

bM: What motivated you to throw it all together?
Russ: I used to own a food trailer, a kind of moto-centric food trailer, I guess. It was called the Café Racer. So, I started the event to try to drum up business one year. The trailer didn’t work out, but the event was so much fun I kept doing it. (Author’s note: I ate there a few times, and it was a cool café on wheels. I was sorry to see it go.)

bM: That first year, how was the turnout, both entries and spectators?
Russ: The first year we didn’t actually have a bike show, it was just kind of a meet up and we had a raffle, and that was about it. 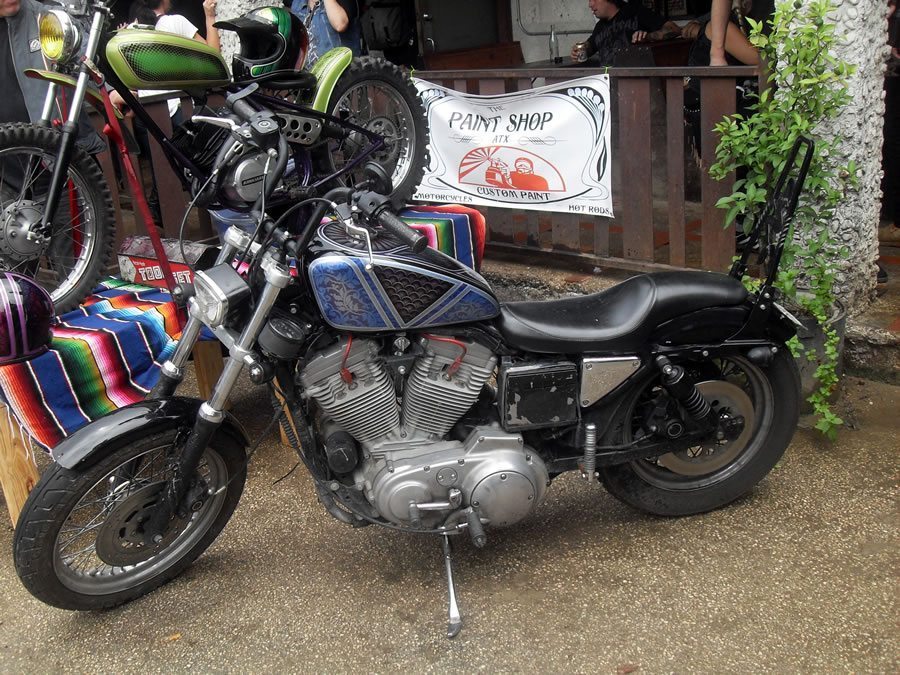 bM: What about the connection to Pets Alive? Where did that come from?
Russ: That’s where I got my dog from, so I’ve always liked it.

bM: Define “classic” with regard to a bike that’s eligible for the East Side Classic.
Russ: Recently I made the cutoff year 1981. That’s the year I was born.

bM: So, it’s not from any rigid definition of “antique” or “classic”?
Russ: No, not really.

bM: Best In Show – is that like a People’s Choice kind of thing?
Russ: No, usually we just get the judges together the day of, and decide.

bM: That leads into the next question – who judges the bikes?
Russ: It’s different every year. This year it was all mechanics from shops around town.

bM: Right now, you have awards for first place in each class. Do you see a time when you might expand that to first, second and third?
Russ: Yeah, maybe so. I try to get artists to make all the trophies, so it’s hard to get that many trophies.

bM: That’s pretty much it. Do you have anything else you want to put out there?
Russ: Well, we started doing the helmet show about three years ago – the helmet art show, bringing artists in to show custom work.

bM: That’s a nice touch, too.
Russ: Yeah, I think this year it really brought a different level of artists to the show. They turned out pretty good this year so we’re gonna keep doing it. 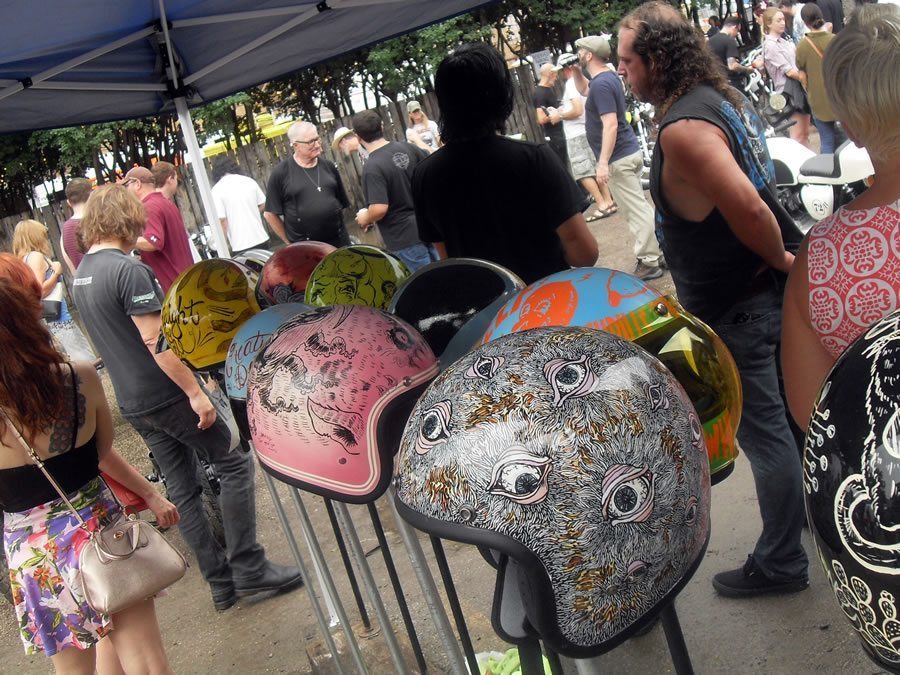 bM: You contributed some helmets, didn’t you?
Russ: I did. I contributed a couple of them.

bM:  Is that something you do on a regular basis?
Russ: Yeah, I paint motorbikes and helmets out of my garage.

bM:  Kind of a side thing, or…?
Russ: I actually work for a couple of painters around town.

At this point, Russ and I sort of turned to more general conversation about motorcycles, life in Austin, bike movies and TV, and the Austin motorcycle scene. There may or may not have been beer involved after the coffee was finished.

The East Side Classic is held every year on Father’s Day Sunday, rain or shine, in Austin, Texas. It’s a great show with a friendly vibe and none of that plastic vibe you get with the big, sponsored shows. Just really cool, old motorsickles that actually get ridden. Even in the rain. If you find yourself in central Texas the third Sunday of June, make your way to town, and check them out.

ESC can be found on the interweb at eastsideclassicatx.com. The website has links to the show’s Facebook and Instagram pages, as well as links to the various contributing artists, and cool photos from this year and years past.

You can find Russ’s custom paint work at spacegianthelmets.com.

I’ve worked on a lot of rallies and various benefits and bike events. I can tell you there’s a lot of invisible work that’s never seen by the attendees, and it tends to go un-thanked. So, Russ wanted to be sure and give some credit to his friends who help him put on the show: Aaron Buck, Josh Kadulka, and Smitty Smith.

Made it to the East Side Classic? Want to show all your friends? Share to let them know you were here. 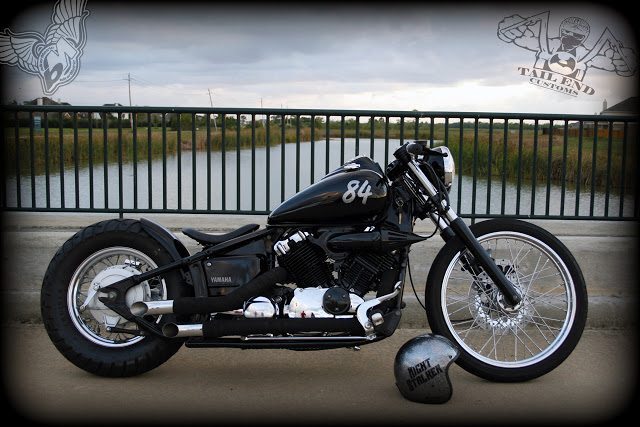 one day the builder of this bike, josh from tail end customs, ... 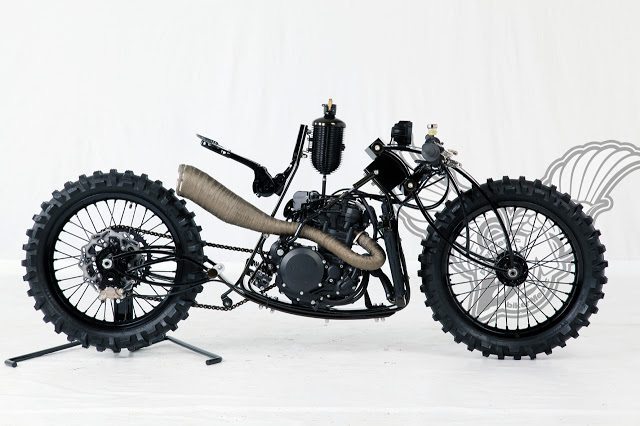 before my words, enjoy some photos by frank sander of the the ...

concert at sxsw this saturday

listen to a some songs for free and dig their bands that ...