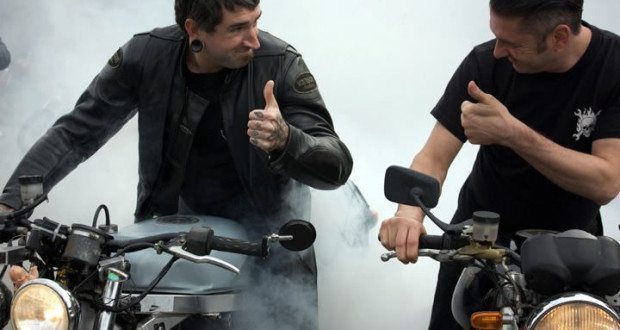 The Dirtbag Challenge is an event that takes place every year in San Francisco. It’s a grass roots, low budget chopper build-off and party, and besides being a contest, it’s also a concept: if you want a bad-*** motorcycle, then go and build yourself a bad-*** motorcycle.

The event is popular for its burgers, broads, beer, and burnouts. But what about the builders? Dirtbag is different things to different people. Meet the builders of the Dirtbag Challenge, and witness the talent and passion that goes into the birth of their one of a kind creations. 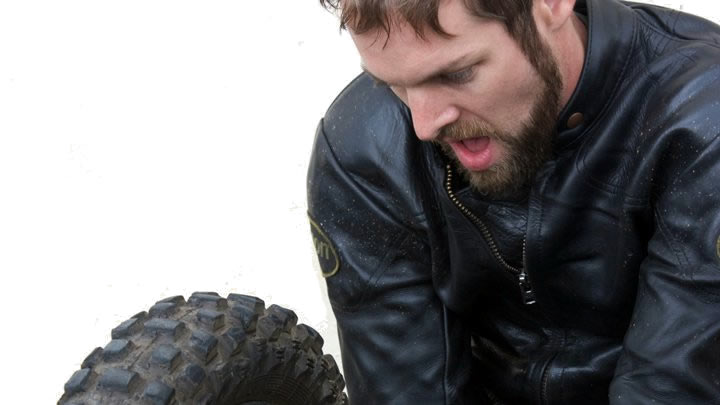 bikerMetric: When you first set out in 2008, to make a documentary, what was going on in your life and in your mind?

Paolo Asuncion: That time of my life was saturated with motorcycle activity. I was the art director at a local motorcycle magazine, A couple of my friends had just learned how to ride so we were hanging out a lot talking about motorcycles, going on local and long rides, and watching a bunch of moto films and documentaries. We made our first short moto film – a quick documentary about the first time we took apart and restored a Yamaha XS650. As for my state of mind, I was going on about a year’s worth of sobriety, so I was trying to keep busy.

bikerMetric: What kind of movie were you heading out to make?

Paolo Asuncion: The founder of the Dirtbag Challenge saw that short film and asked us if we wanted to film his event – which we did. When I finished editing the video though, I realized that the story was in the builders and not the event. We scrapped the movie, waited a year, and went back in 2009 to follow the builders. I wanted to tell the audience about their motivations and inspirations, the reasons they had for making the build decisions that they made. I noticed that spectators at the event were overlooking these things and that is what we set out to present. bikerMetric: What kind of movie did you end up with? (differences, things that didn’t go as planned, etc.)

Paolo Asuncion: Collecting footage was a huge logistical challenge – the contest lasts a month, so my friends and I had to be constantly running around from builder to builder to make sure we had coverage, and then even after they were done building for the day, we would hound them for interviews at night. The main character’s bike broke down during foilming, and although it was not what anyone had planned, it turned out to be an important and significant part of the narrative. We were very happy about how it turned out, although there was a bit too much vitriol than I was comfortable with. It was a sign of the times though – people were sick of the whole OCC and ridiculously expensive custom bike scene of the times.

bikerMetric: What left you the most in awe?

Paolo Asuncion: I had been riding motorcycles for more than 10 years at this point, but it never occurred to me that one could make their own bike. I thought that was reserved for professionals. Watching these people just plow into a bike and get rid of parts that seemed sacred to me – that really opened my eyes. Listening to these folks say repeatedly that ‘anyone can do this’ or ‘you don’t have to have experience to build a bike’ – that really inspired me to not only customize the bikes I owned at the time, but it got me thinking that one day I would build a chopper. 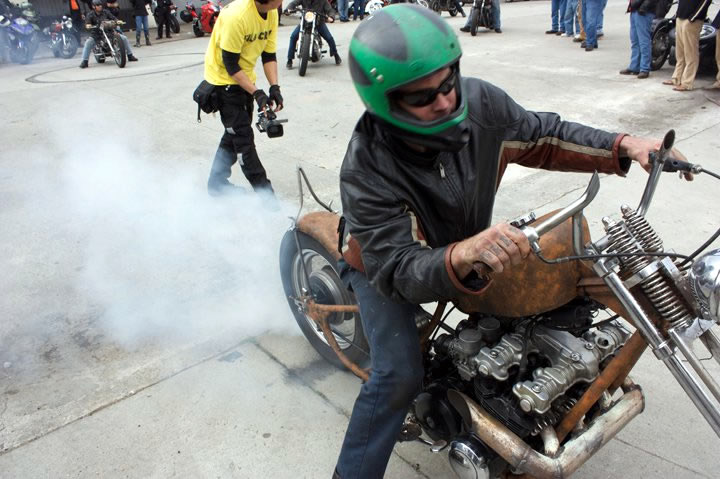 bikerMetric: Did your perception of the event change? How?

Paolo Asuncion: Completely. The first time I saw these ratty bikes, I thought it was entertaining and novel. But I noticed the look of satisfaction on the builders faces though, and I discovered why while documenting their builds. Bringing a bike back to life is satisfying in many ways – something I would discover for myself later on.

bikerMetric: What kind of reach and exposure has the documentary had?

Paolo Asuncion: In the beginning, all we wanted to do was show the San Francisco motorcycle community the movie we had made. Word got out though, and I got messages from different parts of the country asking for copies so they could screen the movie. Since Choppertown was one of the reasons we set out to make movies, we reached out to them and were pleasantly surprised when they asked if they could distribute the film. That led to more exposure of course, mostly via socail media, which is where we had visibility on conversations about the film. It was really enlightening and interesting to see people’s reactions – both good and bad, but it was really inspiring to hear people say things like “man, that makes me want to build a bike right now!”. That was the ultimate compliment.

Another litmus test was entering and being accepted to the Motorcycle Film Festival in NYC. We screened the film a few times prior, but it was always to a crowd that was familiar with the event. The Brooklyn crowd had never really heard of the Dirtbag Challenge, but the audience applauded the film nonetheless. It was then that I was convinced that the film itself – and not the event – could stand on its own merit. 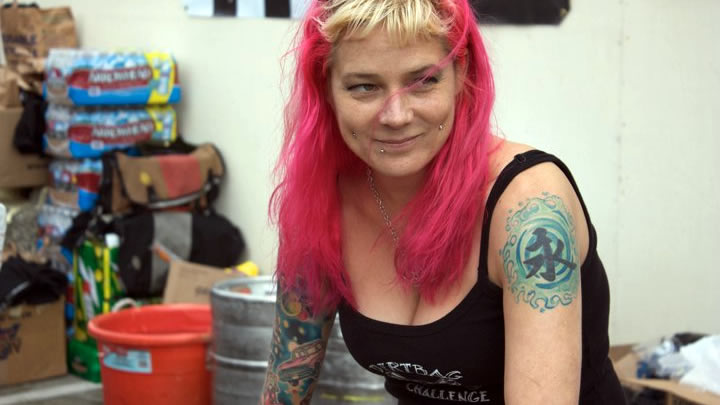 bikerMetric: Did you think it would get so big?

Paolo Asuncion: First of all, it didn’t get big. Second, I was always proud of the finished product. We were very happy with the job we did, and personally, I was very satisfied with the edit of the film. I still remember finishing the edit – it was 3 am when I laid in the last sequence (the slide show scene that featured the bikes that led to Poll’s last words that led to the last title frame that leads to the credits) and I watched the entire film standing up with my arms raised ala Rocky at the top of the stairs. It’s very much like working on a bike and hearing it turn over for the first time.

bikerMetric: Did it ever get a little weird?

Paolo Asuncion: Not really, no. Some weird private conversations were happening behind our backs, but mostly about the event and the builders. It amazes me how some so called motorcycle enthusiasts would seek to tear apart other people’s ideas of what a motorcycle is.

bikerMetric: Ever look back on anything and wish you had done it different?

Paolo Asuncion: Yes. That is why we made a sequel. bikerMetric: Where are you at now? What’s going on in your life?

Paolo Asuncion: I’m a **** ton busier these days. Not only with a full time job, but with my family. I have a son from a previous marriage, a wife (who I met through Dirtbag), and we have a 4 year old daughter.

Still riding as much as I can, and as far as film projects, we have 3 or 4 projects in development. We plan to submit at least one short film and one feature to next year’s MFF, and we just started a web series:

bikerMetric: Where’s the future taking you?

Paolo Asuncion: The goal is to produce a proper moto film that will have crossover appeal. Making these films is enjoyable, but a huge part of that is because I am making them with some of my best pals. As long as that continues to be the case, we’re just gonna keep making all this silly ****. :)

bikerMetric: Last but not least… Tell us a little about part two?

In the first film, all the builders said the same thing: “anyone can do this”. Also, like I said, that film had a wee bit of animosity in it, some trash talk about other builders. Sure these were sentiments of the people we interviewed, but I admit that I prodded a little bit of that. When my buddy Luis suggested making a follow up, I thought it was a chance to turn that sentiment around. So having those two elements in mind, and since we were the perfect “anyone” not having any real fabricating or building experience, we set out to not only put what those guys said to the test, but also to present a more heartfelt version of the first film. 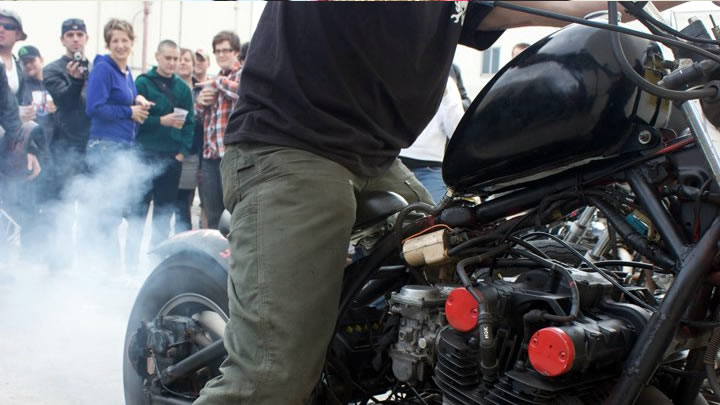 We also wanted the second one to be more personal – we wanted to emphasize the lighter side of this whole thing: every time you see a bike build video, it’s always taking itself waaaaay to seriously. Slow motion, some gruff voice is reciting some cliche poetry, people are building and making sparks in the dark, etc. I mean, sometimes these ******* don’t even look like they are enjoying the process! SO like Dirtbag 1, Dirtbag 2 is also a response to the currect crop of builders and of motorcycle film. We just wanted to have fun, and to show people that this is supposed to be fun.

The sequel took home the People’s Choice Award at last year’s MFF, and people like Shinya Kimura and Austin Vince have gone out of their way to tell us how much they liked it – so all in all, I think we succeeded.

bikerMetric: We think so too. Thanks Paolo!

Find out more about the Dirtbag Documentary (I and II) on Facebook.