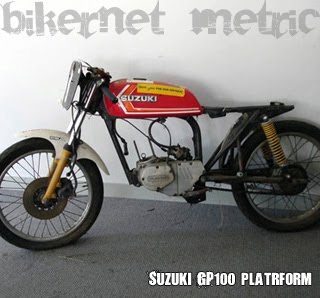 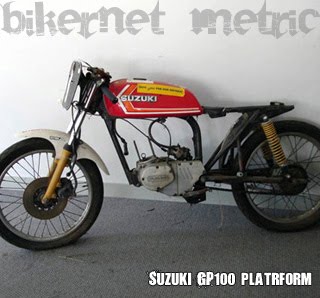 =”separator”>Assuming that compressed air will replace gasoline engines in the future, an Australian industrial designer named Edwin Conan has devised a pneumatic-powered motorbike built on the frame of a Suzuki GP100.

While the “post-oil” era is generally discussed in terms of electric vehicles, a compressed air engine has many supporters who are developing projects. Edwin tried to build a pneumatic pmotorcycle (yes, I think that’s funny) that could overcome the main barriers of this type of engine: short power lifespan (AKA: autonomy) and low speed.

With 15 students from the Royal Melbourne Institute of Technology, Mr. Conan procured a Suzuki GP100 to begin the building of his “Green Speed Air-Powered Motorcycle.” Once they got the old bike, they tore everything off but the frame, wheels and brakes. The air bike has no gearbox; there is only a pinion mounted directly on the motor shaft and connected to the rear wheel by a chain.

The mechanical engineering design is derived from the work of engineer Angelo di Pietro who has patents in pneumatic motors, including a compressed air rotary engine. His work created an engine with no emissions, that was incredibly quiet, has constant high torque, no vibration, and is very efficient; needing only one psi of pressure to overcome the friction to enable movement.

Stupid dinosaurs. There should have been more of you. 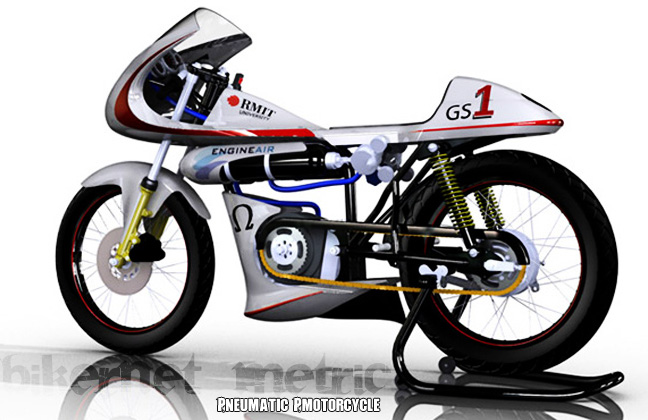 Sadly, there wasn’t. We’ve sucked up most of what’s left of them and it seems we are entering the age of motorbikes powered with alternative sources such as electricity and air. This will make our internal combustion-powered *** scoots extremely rare in a few generations. At that time, Edwin imagines future air bikes will be “equipped with photovoltaic panels that generate enough energy to compress air and store it in reservoirs, which indefinitely increase its autonomy!”

Air bike, say hello to solar bike. What about riding at night? You’ll need batteries to store the saved electricity. Okay then, say hello to electric bikes. Wait…. what’s the big deal about air when battery-powered bikes are already running? This is giving me a headache. 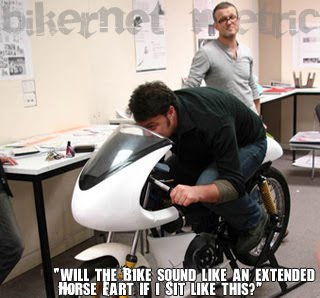 Currently the air bike is only a concept, but as you can see in the photo to your right, they are working to build a running prototype. Edwin is hoping that once the bike is built and runs as long and fast as he hopes, he can get others to invest in the project.

The nice thing about pneumatic pmotors (ok, I’ll stop) is that they possess maximum torque even at zero rpm. The bad thing is that an air-compressed motorcycle motor needs some sort of fuel to work at compressing the air which then powers the bike. This seems redundant.

We’ll see what Edwin Conan and his Aussie crew can do and get back to you with any new developments.