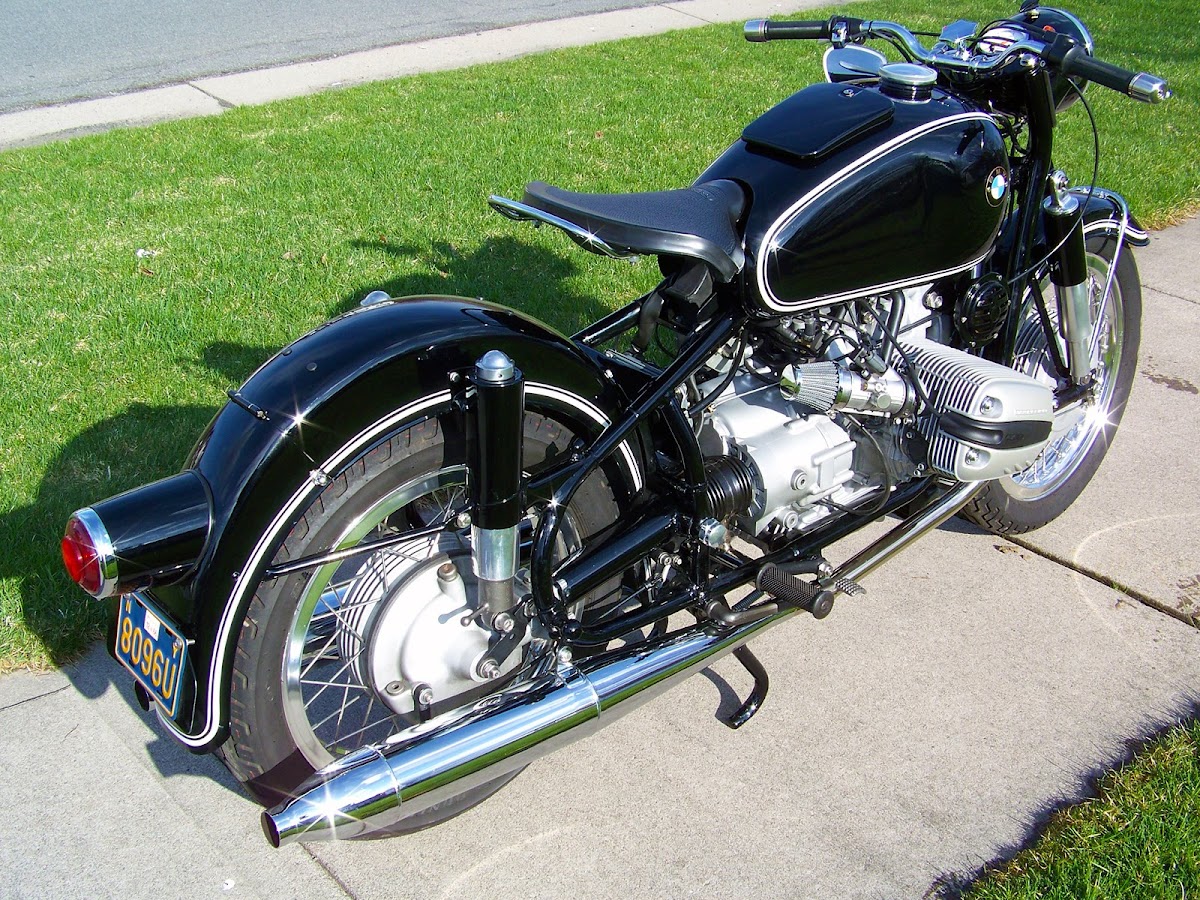 I found a photo of this bike, a custom 1966 R60 BMW cruiser with a new 1150RT motor in it about a week ago and loved it. Seems some pursuits are all up in arms about it. Pansies. Stuff is made to be modified. Ever seen a 1926 Ford hotrod with a Boss 429 motor and heard somebody cry, “where’s the original 177 inline four!” Yeah. Thought so.

For a little background on the builders, there are three main troublemakers. Rodney has been painting, welding and building cars for 45 years. Supposedly, “he’s the kind of guy that when you ask him how to do something, he breaks out a welder and says, ‘let’s see what we can do right now.'” Kurt went to school for software engineering, but knows both electrical and mechanical things very well. Steve went to school for mechanical engineering and has a part-time business in engineering consulting. What a bunch of smarty-pantses. All these guys either work as engineers or in shops that make parts and assemblies. They’re dudes to know when you’re out of the flow.

Steve Ferrarese is the guy who had the original idea and humored me by answering a few emails and speaking with me on the phone. Here are a few questions I asked him:

bM: What made you want to meld a 1150RT motor with a R60 body, and how many beers were consumed before you spake your idea aloud?

SF: I’ve been talking about this idea for a long time. Maybe too long, which could be the reason most of my friends like to drink heavily when I start talking. We’re all car guys, and we’ve been putting newer motors in older cars for some time. I had a few /2’s (R69S, 2-R50’s, a real nice R60) and they are great bikes. I love the looks but they’re painfully slow. The R69S left me feeling really helpless one day on an entrance ramp when a fat woman in a rusty Dodge Caravan tried to take me out. She sped effortlessly away while I did my best Fred Flintstone, hoping my shorts would dry. 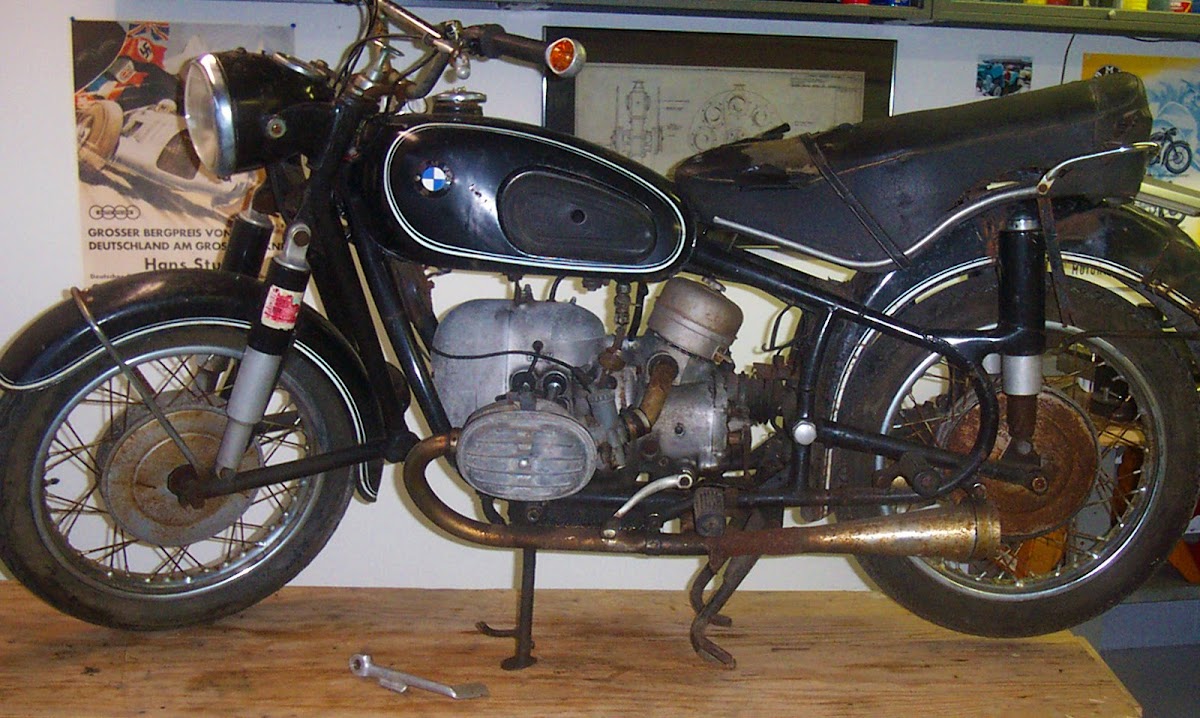 bM: I bet if you set your shorts on her face, her hot air would dry them in seconds while her failure-for-a-husband grins toothlessly in the background as her stupid kids yell, “we’re hungry!” Did you have one or both bikes before you started your project?

SF: I bought both bikes for the project. The RT was a complete motor with injectors, ECM, harness, and transmission. The /2 was a complete bike, but a rusty mess. The motor was hosed, the body work was mangled, and the chrome was flaky. 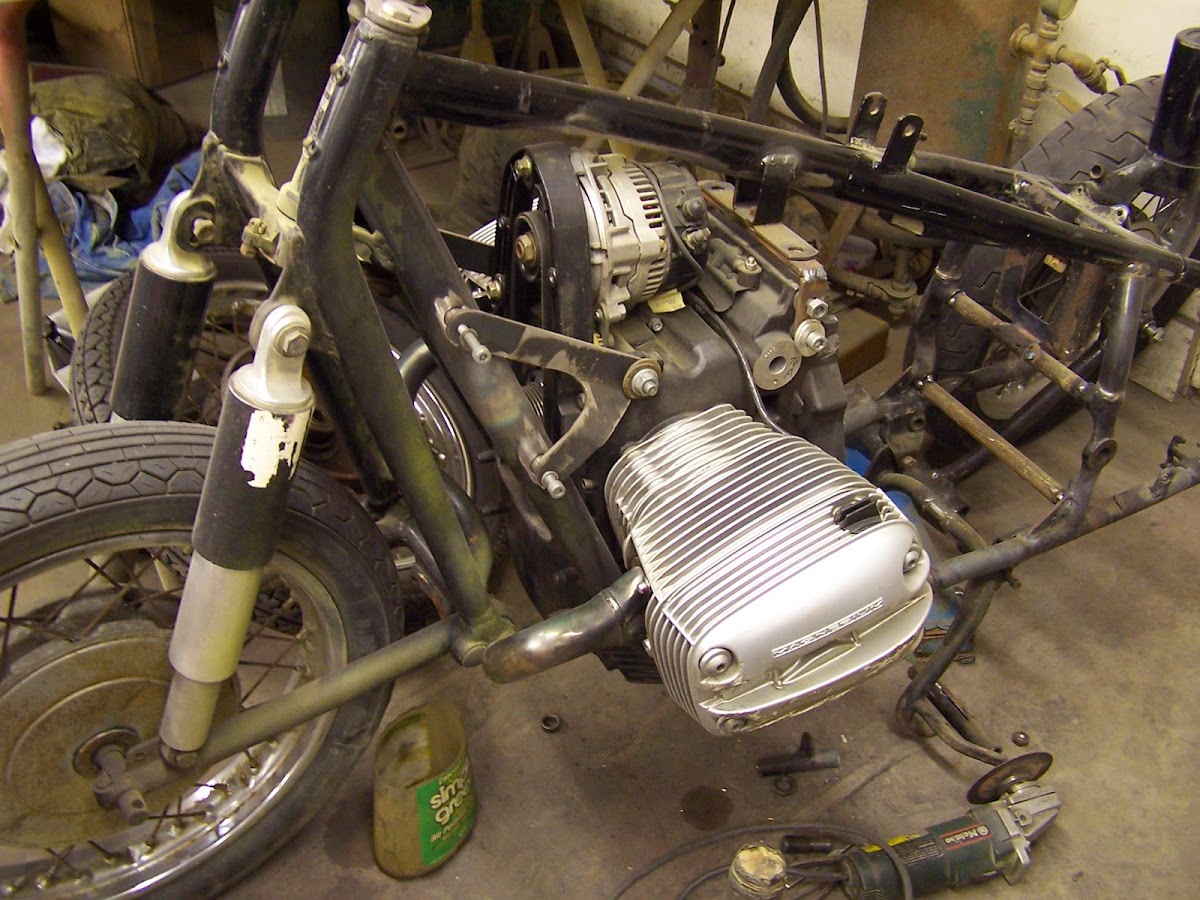 bM: Flaky, huh? Your friend Kurt has alleged that his contribution was “hanging around and telling [you] it couldn’t be done.” My informal poll, taken in three bars in Austin Friday afternoon, has 100% of respondents remarking about his contribution with skeptical smirks. What would you like to say to those who doubted your engineering prowess?

SF: Kurt and I have been working on stuff together for the last 35 years. Truth be told, we bounce ideas back and forth, and usually get things working. He will keep asking the “how ya gonna do that?” questions, which keeps ideas going. For the engineering thing, we’re both engineers. Kurt knows software and electrical, I’m mechanical. One of my other close friends, Rodney, is the best fabricator in the group. 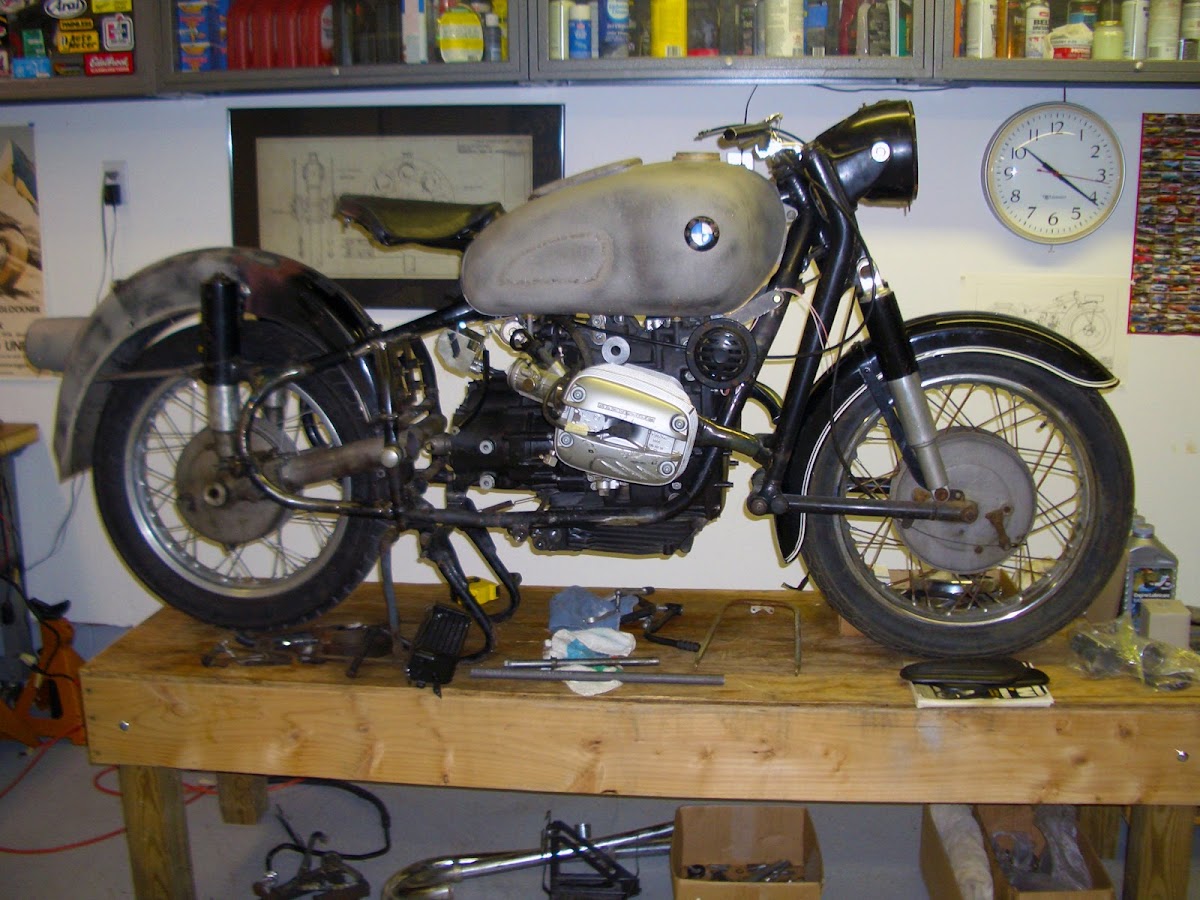 SF: With heat and a ram, we opened the frame up a few inches at the bottom, added wider cross bars and fabricated a wider swing arm. The drive shaft is also custom with a bigger diameter and ties the RT yoke to the /6 spline gear and the R100RS final drive. It took a great deal of checking over and over to get everything lined-up. The head pipes were the hardest to figure out. After trying a muffler shop, a tube bending firm, and a motorcycle exhaust guy, which chewed-up a year, I modified conversion pipes from EPCO and now all is well. To keep true to the /2, I stayed with /5 drums and a manual clutch to keep the /2 controls. In general, I tried to use BMW motorcycle parts or fab from scratch. I think the Autometer gauge is one of the only deviations.

bM: Does this bike help you pick up chicks or do they still ask you what kind of Harley it is?

SF: I get a lot more attention at the Harley bars then the potato-potato bikes do. I like Harleys but the chicks still ignore me. I chased my wife for quite a while to talk her into marrying me. She still refers to me as her stalker. 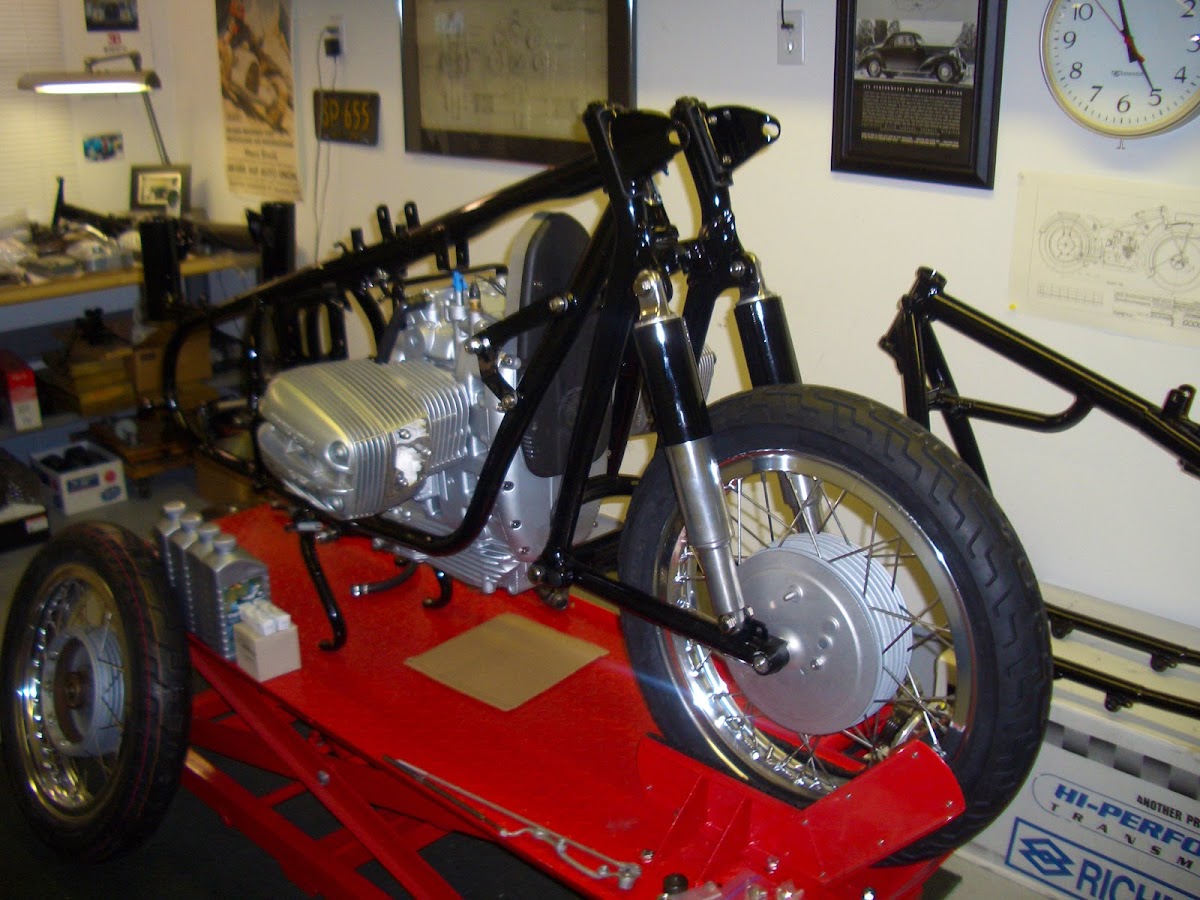 bM: Stalker. Nice. That’s a better name for this bike than Frankenbike or whatever **** others have written like an old frame has never held a new motor. Please tell us about your next project.

SF: The bike was sold last weekend on ebay and is waiting for a trip to Dallas. It was time for me because I like building stuff and keeping it, but room and budgets don’t allow for much. After a little break and some seat time on a newer bike, I plan to start on an 1936-37 R5 copy with a hex motor. I can use several front forks and the hard-tail makes the final drive stuff easy. Plus, the one-inch bars and inverted levers, the black rims…. what a sinister look. Kurt’s already pointing out the difficulty of getting and making R5 parts, and Rodney and I are already talking about what part of the frame needs to be fabricated from scratch. This is how it starts… 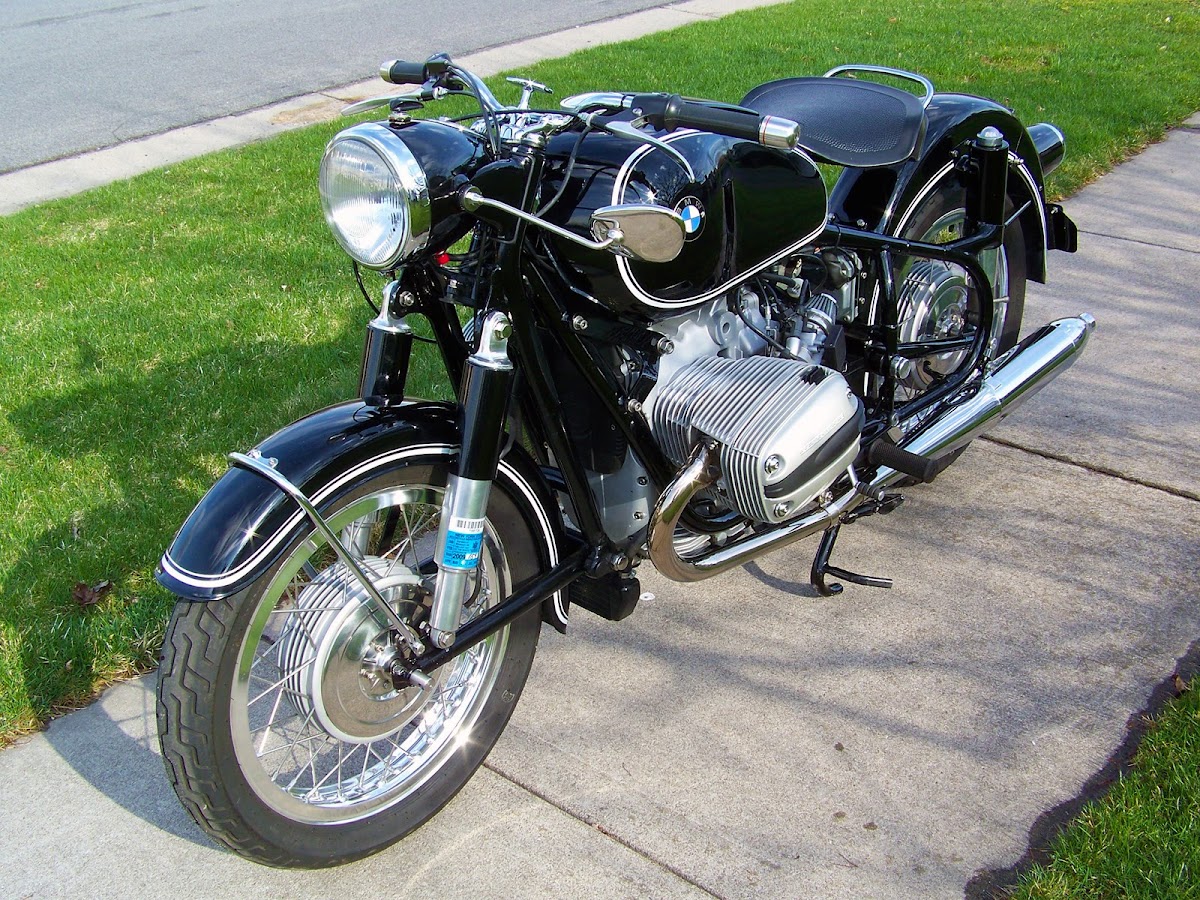 bM: Well man, you sure started something. We’ll be very interested to see how your ’36 R5 turns out. Congratulations on ruffling the feathers of those who fear what is outside the box. What is a motorcycle but ours to do with as we wish?