went up to mansfield/lexington ohio to the ama mid-ohio vintage motorcycle days this weekend with eric to a race that broke out in a flea market. it was an interesting trip. 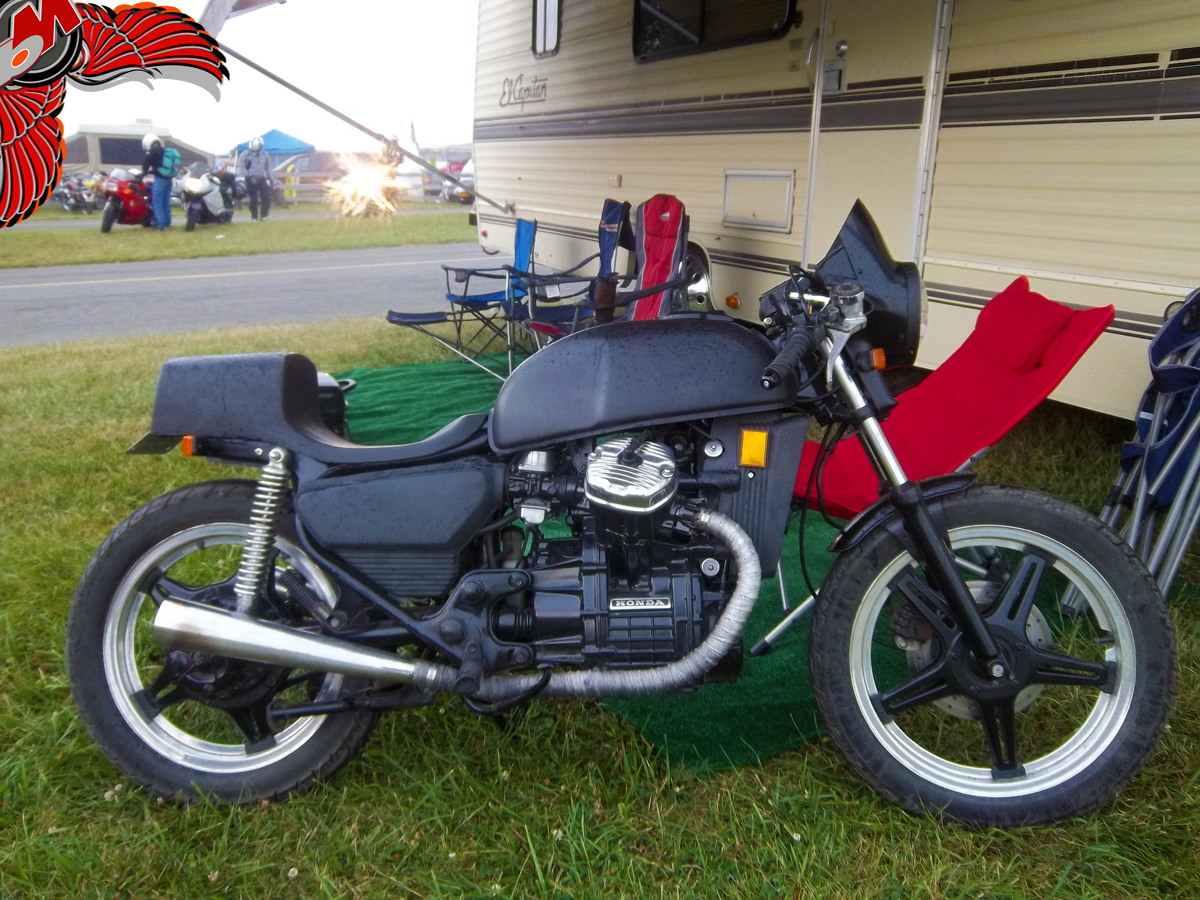 we met the guy who built that old honda cx500 cafe and drank a few beers as we walked around. could have met dozens more builders and seen hundreds more bikes for an extra hour except… ama, get a sponsorship from a mobile phone company or something. seriously. you’ve got tens of thousands of riders, spectators, fans, and vendors and nobody’s phones could make or receive calls. only text worked and sometimes text isn’t enough. that’s a pretty half-assed production, folks, and on a couple of occasions this inability to have standard, first world 21st century communication caused stress that should have never happened had we, oh, been able to make phone calls. 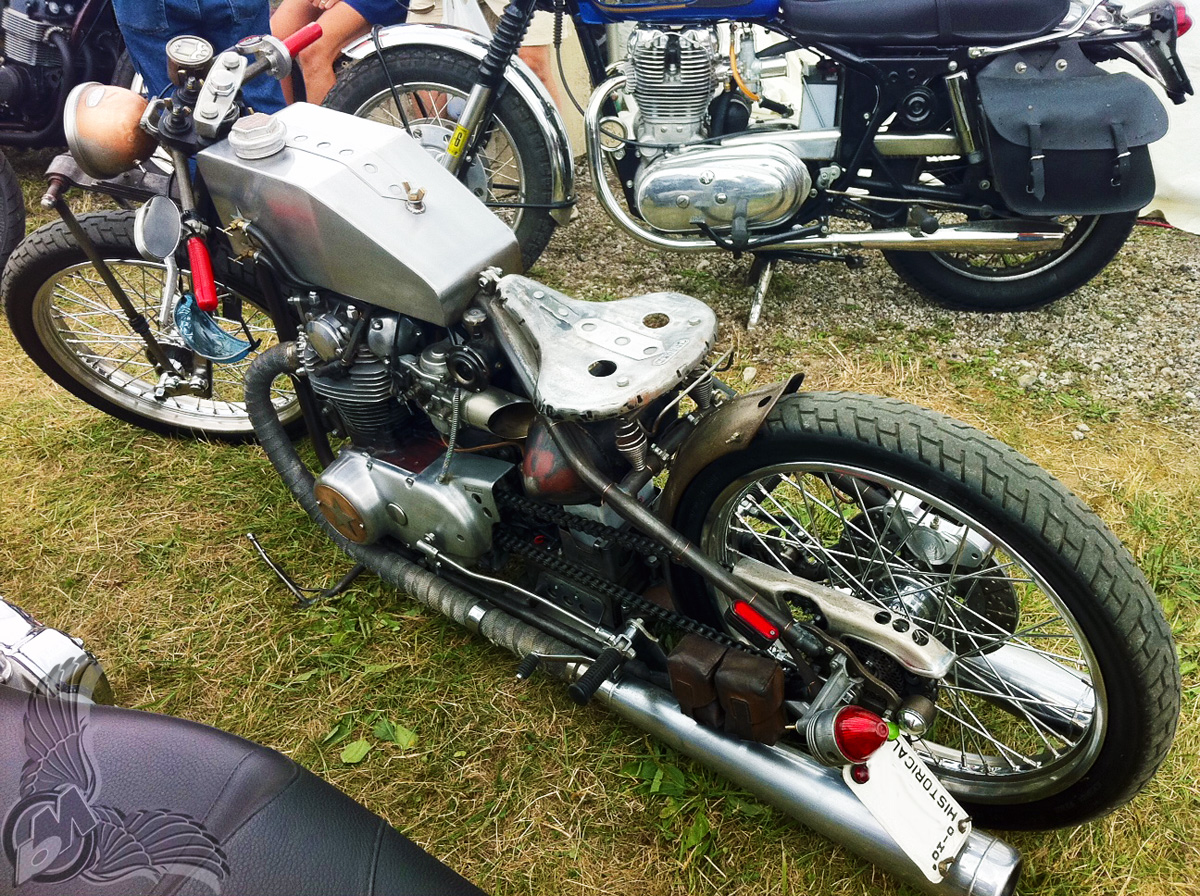 eric met some folks, and cafe racer mag editor and publisher mike seate pulled his xs500 cafe out and snapped some pix. eric traveled 1400 miles round-trip and slept three hours friday night (actually 5:30 am to 8:30 am saturday morning) to be there because he was invited by mike a few weeks earlier. his bike better be in mike’s mag. 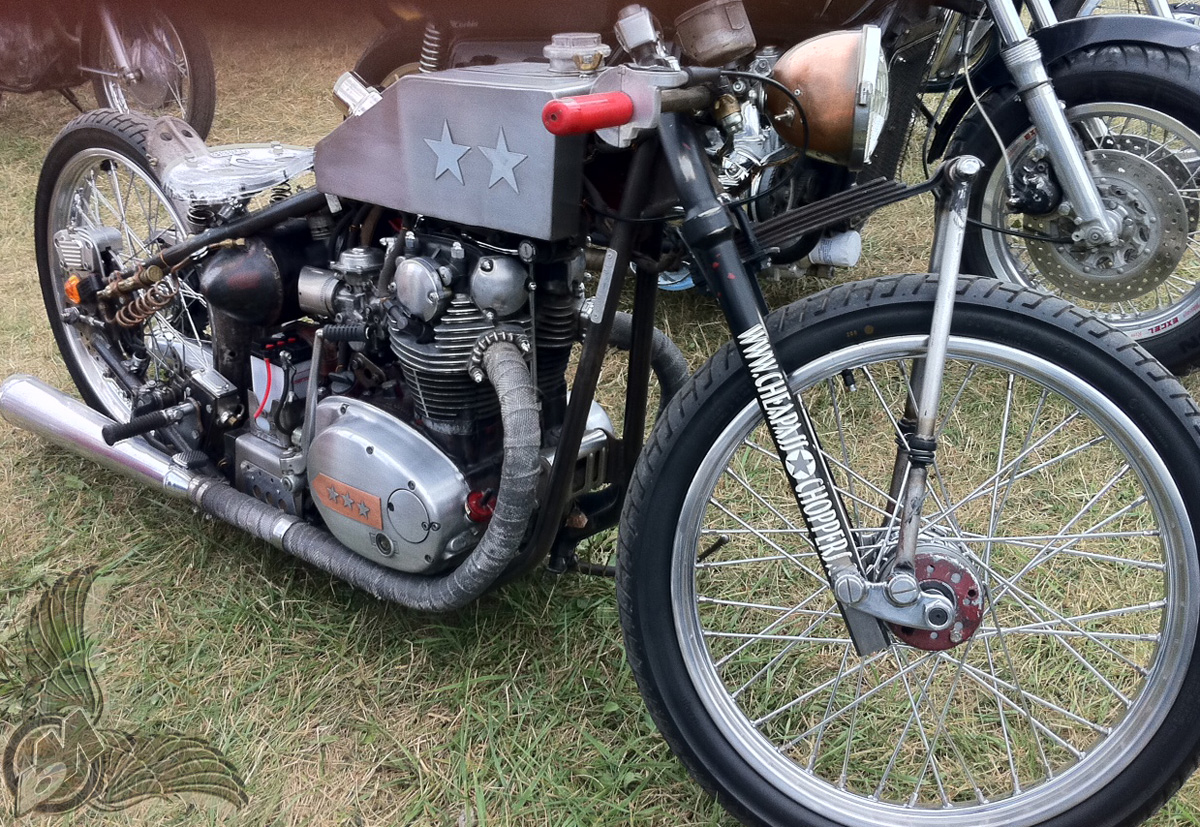 around the track were vendors selling largely swap meet ****. it was heaven. cool old tanks, wheels, frames, motors and a million parts strewn around as if a motorcycle hoarder’s home exploded. there were a few companies you’d recognize but it was largely the little guy building a bike here or a bike there who has a ton of s**t laying around they are trying to sell. if we go next year, we’re going to be bringing money.

we saw many cool bikes built by guys doing what they can with little to nothing but some tools and a vintage metric motorcycle. there were bikes of every sort, including the obligatory cafe bump made from a gas tank rat machine. 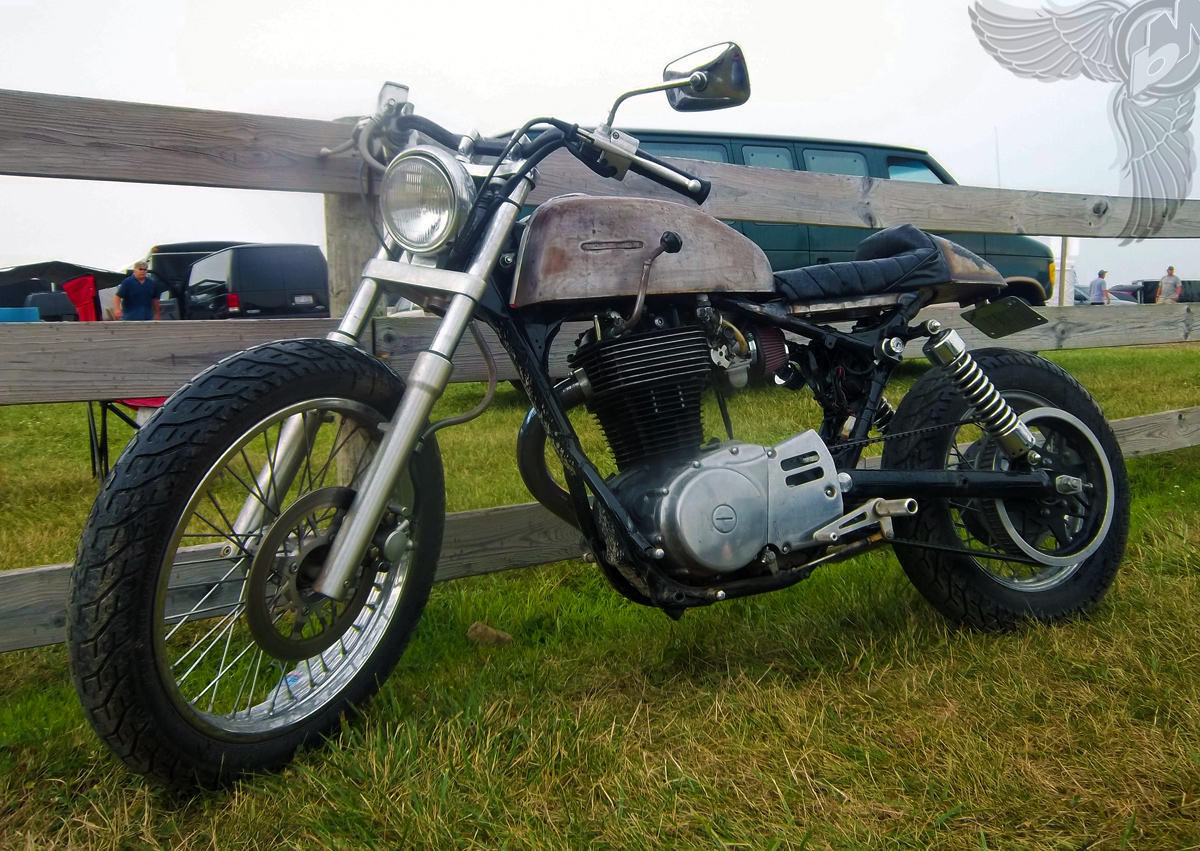 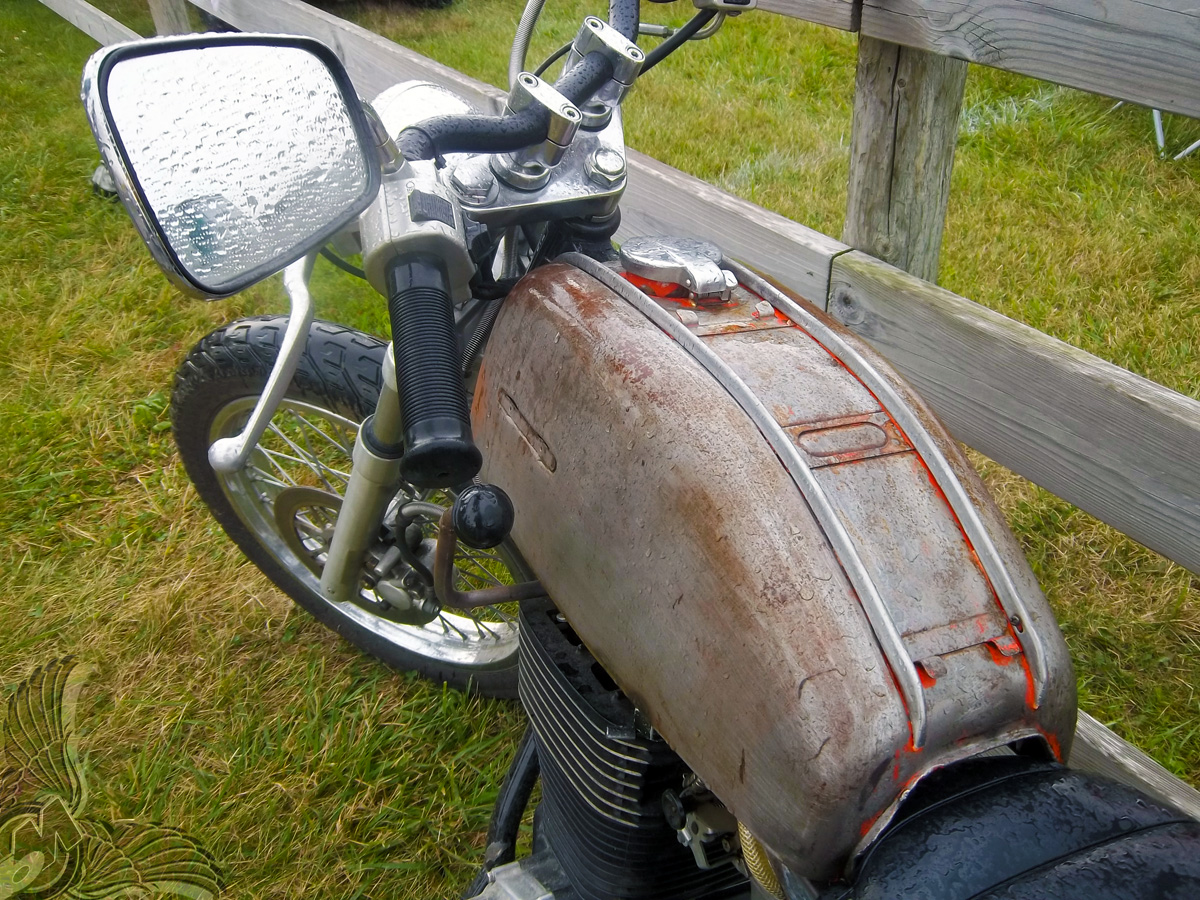 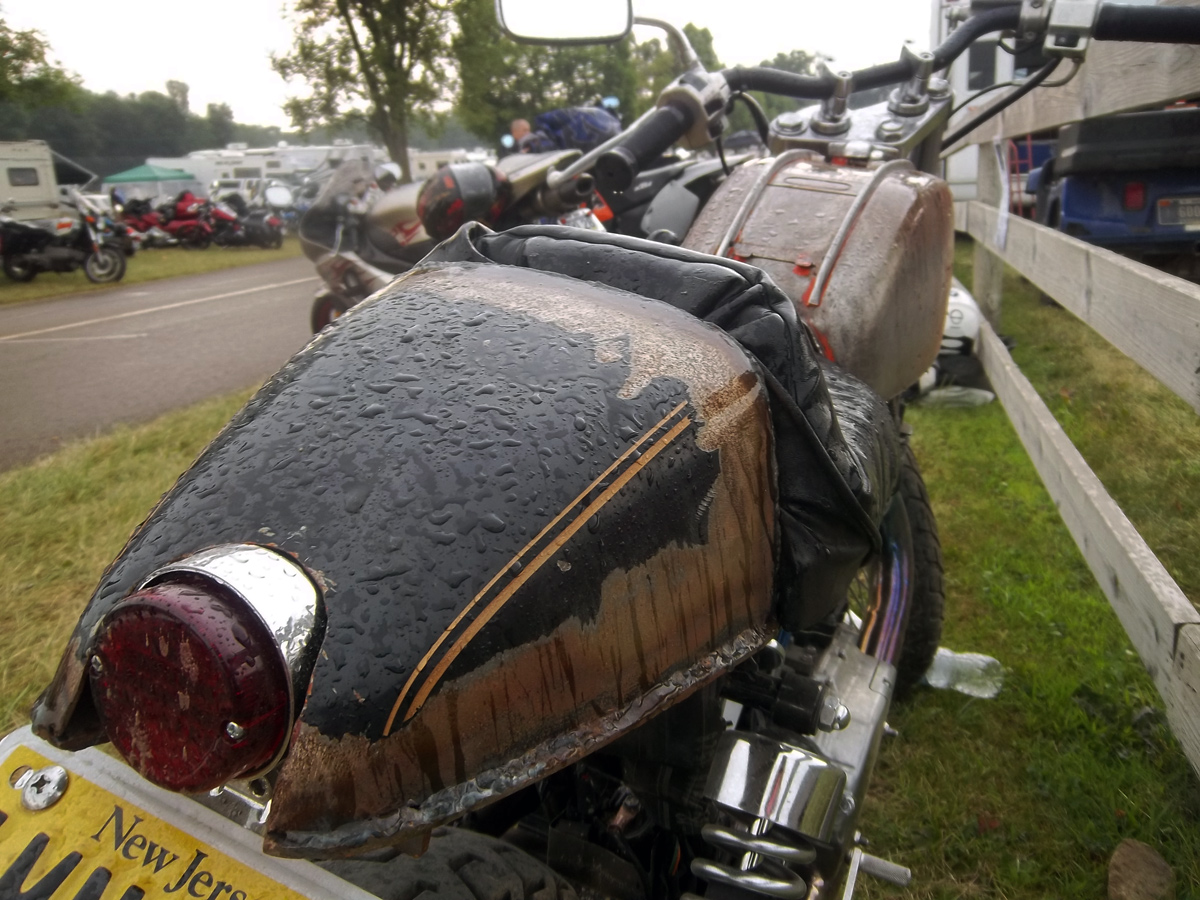 how many scavenged parts made this jersey blaster?

at the end of the day, eric wasted his rear wheel bearings and after grabbing some subway, we went to the lounge attached to the motel where we and many other biker types were staying. the lounge was called joez tabernacle lounge. no apostrophe anywhere. they had cool tee shirts, of which i would have had to choose to not drink beer had i bought one. the shirt had an eagle with the american flag on one wing and a rebel flag on the other. 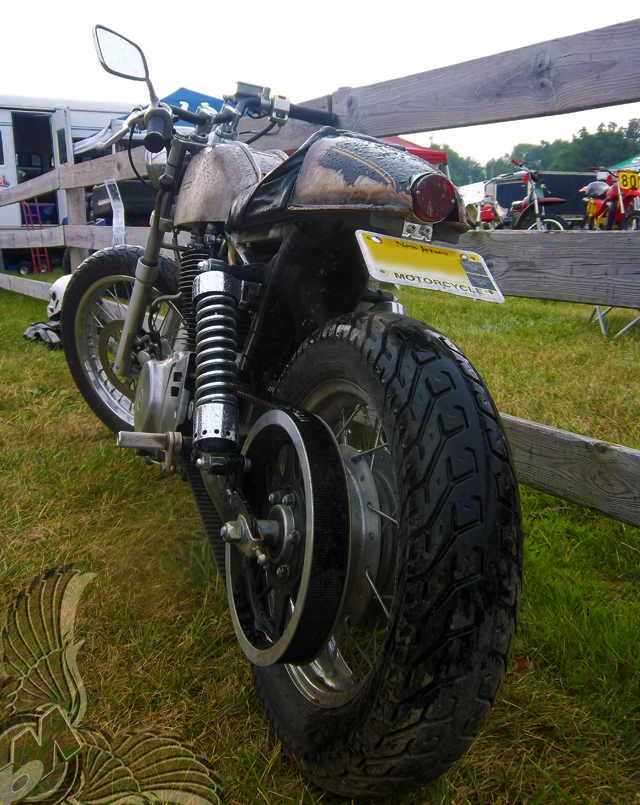 we were outside mansfield, off highway 30. ohio fought for the union in the civil war, and there was a confederate flag on the t-shirts of a local bar? i was amazed but the slogan on it, “***, guns, less government” was cool with me. so was our bartender, sam. there was a gadsen flag on the sign outside the bar. i’d recommend to anyone going to the mid-ohio track to stay at the mansfield inn and drink at joez. we had a great time talking/drinking with old guys who raced and held records in bonneville (what’s up with that all of a sudden?) and went back to the room to pass out around 3 a.m. 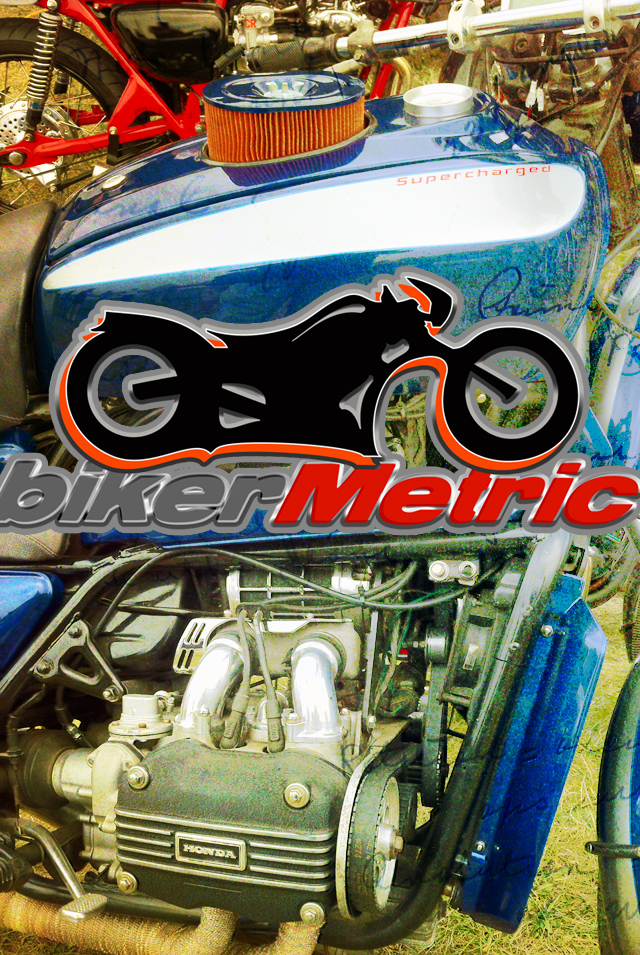 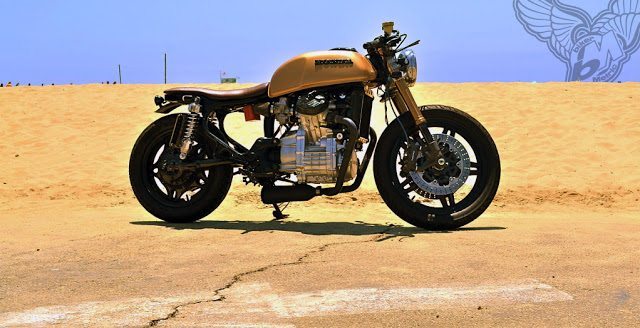 received some pix and info from mister justin allen about his custom ...