anzani was an engine manufacturer founded by alessandro anzani (1877-1956) in 1907 in france. throughout its 73-year history, the company produced engines for aircraft, automobiles, boats, and motorcycles in factories in britain, italy, and france. 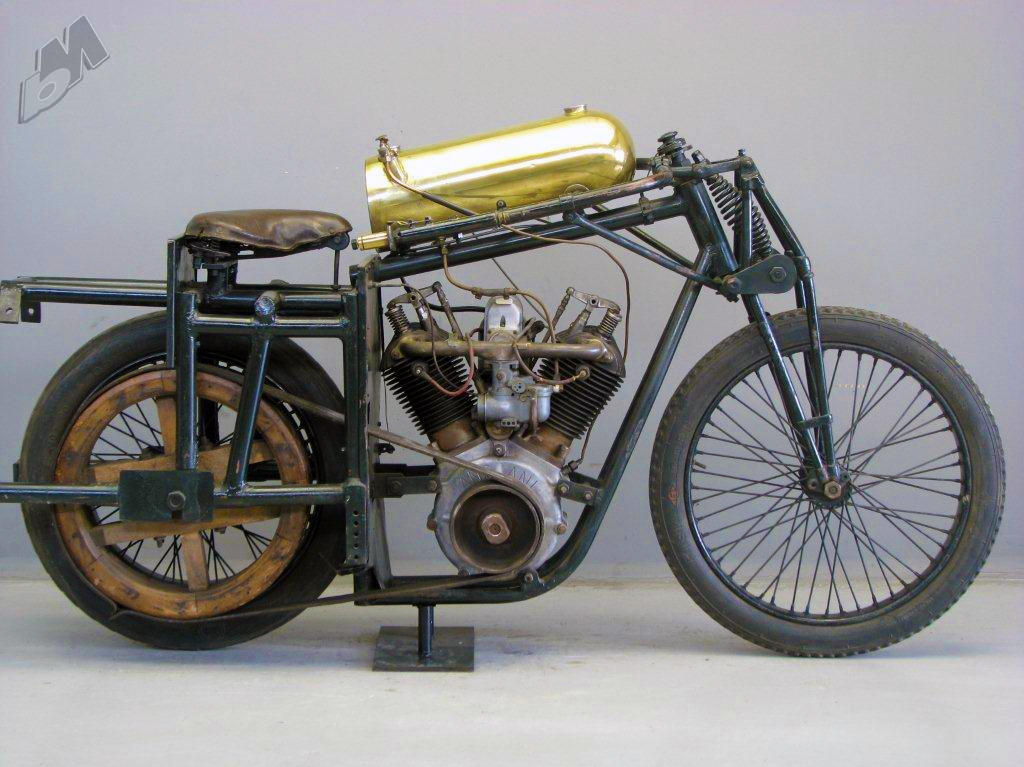 alessandro’s early designs included a 25 horsepower (18.6 kilowatt), three-cylinder motorcycle engine that in 1909 powered one of sikorsky’s first helicopters. the copter failed to fly due to a lack of power and a better understanding of the dynamics of helicopter design. sikorsky went on to be a huge innovator in helicopters, producing the first operable american helicopter in 1939.

in 1913 anzani had seven different aircraft engines available, one of which was a two-row 10 cylinder radial. in 1906 he built a motorcycle with a propeller. 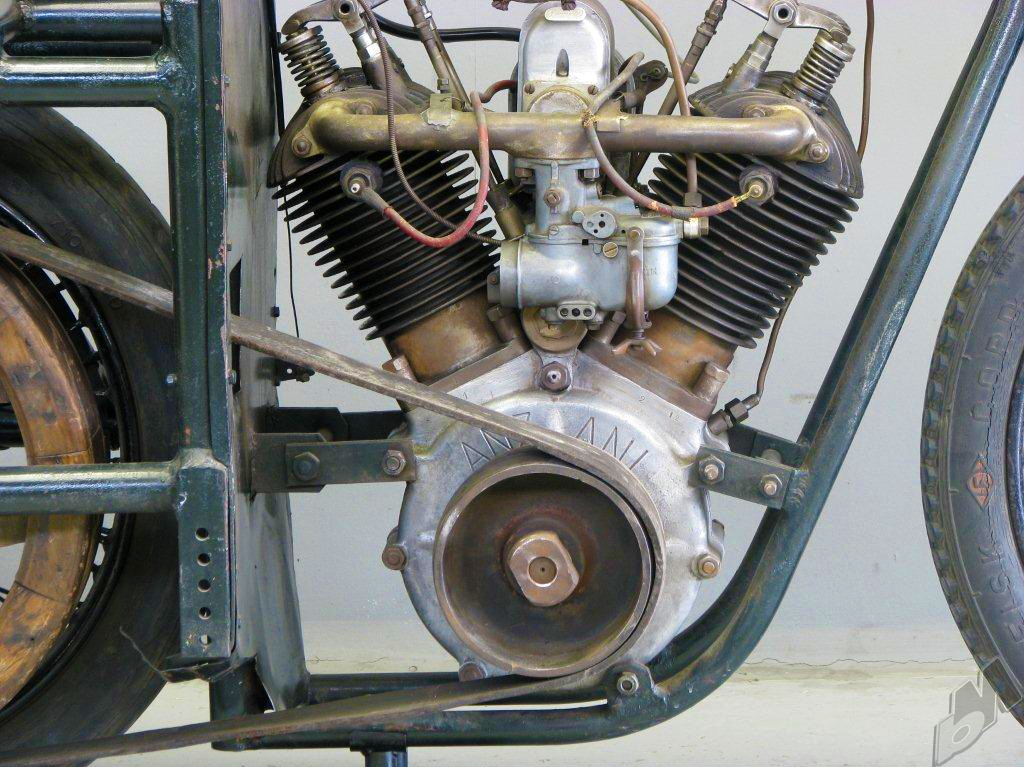 the bike here was specially designed to create a large slipstream for its rider and is equipped with what was then a powerful v-twin motor.

i find that interesting as the cylindrical copper fuel/oil tank looks pretty uncomfortable with its flat end. if the rider was to lay down upon it while racing, it seems as if it would hurt. if the “slipstream” is at the end of the tank, the rider seems to have had to crunch into a fetal position to race this bike. see where the handlebars stretch back to the end of the tank? that seems to have been the concept. were there chiropractors in 1925?

this rare anzani racer was allegedly designed and built by legendary boardtrack speed racer léon vauthier, who rode this bike to a whopping 75mph (120kmph) the year it was built. i write “allegedly” as there is no proof on paper – no matter what anybody else says – that vauthier did anything but ride it, even though he is well known to build many of the machines he rode. 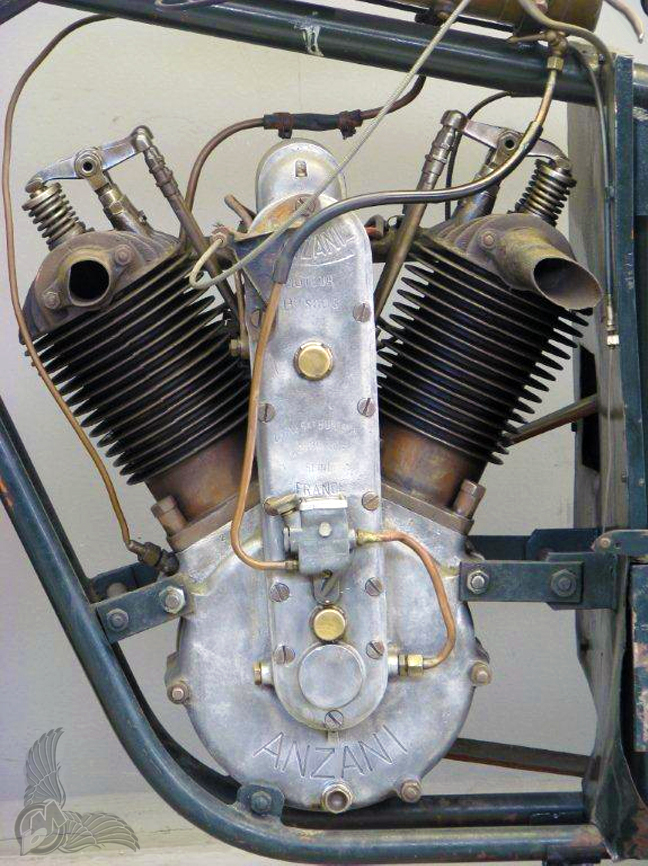 as the title states, the bike has a two liter (122 cubic inches) overhead valve engine with no real exhaust. just holes in the heads. that’s a metaphor for something, i’m sure. the magneto is positioned in the center of the engine. the motor is fitted with a “drip feed” oil pump with extra lubrication at the front of the cranckcase, which is controlled by a hand-operated oil pump in the oil tank. didn’t rube goldberg really design this?

also, what is the deal with all the extra tubing at the rear? it looks like a bolt-on. did this thing pull a cart later in life?

the anzani company went though numerous changes in name and location. through the 1960’s until its final product was assembled, it was a company based in england that focused mostly on marine, light vehicles, and motorbike motors. the company’s assets were liqudated in 1980.

got a message from my fb pal pete at occhiolungo. he wants to clarify a few things about this bike. i knew it was called a “pacer” but when i read it was ridden by a famed racer, i changed the word to the sportier one. hey, i’ve got traffic to drive to this site! who cares about a pacer?

as for the information i gathered, it seems the websites i used for info were a bit lacking in some areas, namely context and decent writing. here is the gist of his message:

the bike was ridden by a pilot who wore a “big suit” and stood up straight while riding to block the wind for the racing bicycle who rode right behind him. there was a roller placed horizontally behind the rear wheel in case they bumped (i liked the cart idea better). since the motorbike rode so close to the bicycle, it couldn’t shift gears without a crash, so they used really big motors like this anzani and ran in one gear from a stop all the way up to the maximum speed of the racing bicycle.

according to pete, it was “really cool stuff. it must have been fun to watch three or four of these and the bicycles they attended to on a velodrome at the same time, trying to get ahead of each other.”

wow. it’s like steampunk roller derby with the bigger and more powerful bikes operating like blockers to the smaller, “bicycles” behind them, which were in turn similar to a jammer. this also seems to apply to offensive linemen and running backs and receivers in football. interesting.

thanks for all the additional info, pete! check out occhiolungo here >> 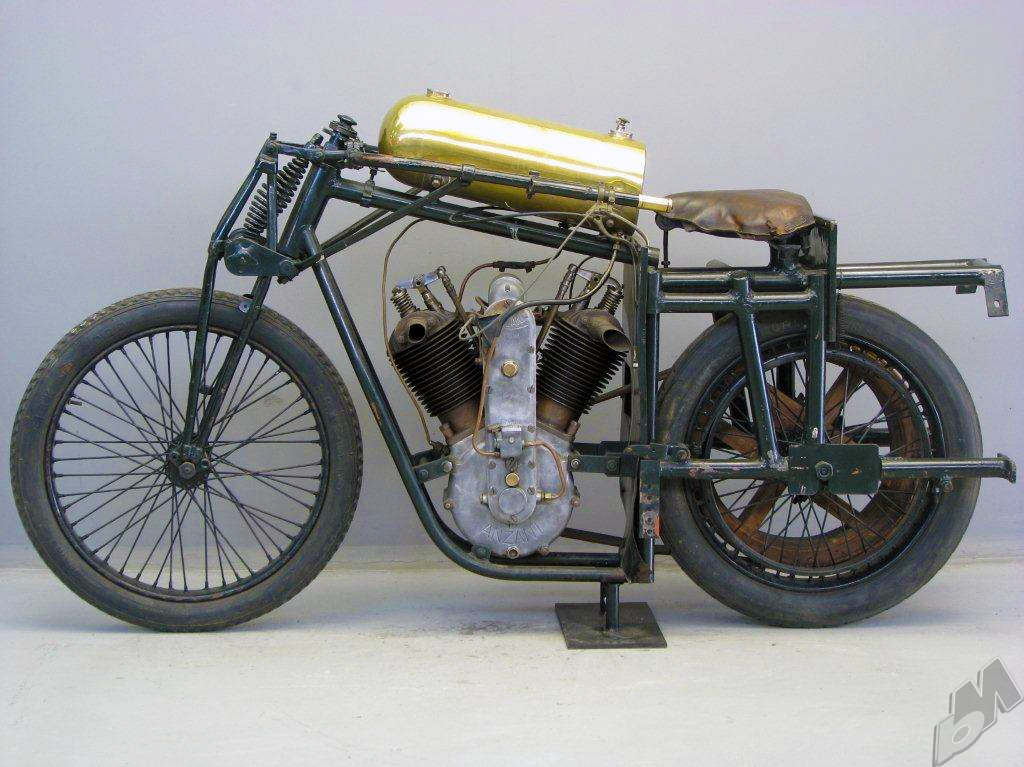 Previous: crazy s**t to freak you out #51
Next: amusing statistic of the week: keywords + one xs650 chopper