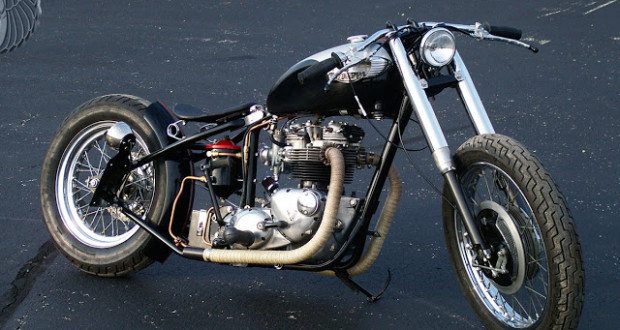 Welcome to bikerMetric’s continuing saga of builder interviews. In this article, we’re going to meet Dave Helrich of Helrich Custom Cycles in Tempe, Arizona. He and I have had a few long telephone conversations about everything from politics to art over the past six months, and he’s introduced me to cool folks who have become good friends. Dave builds mostly Triumph bobbers and does them cleanly for a great price. 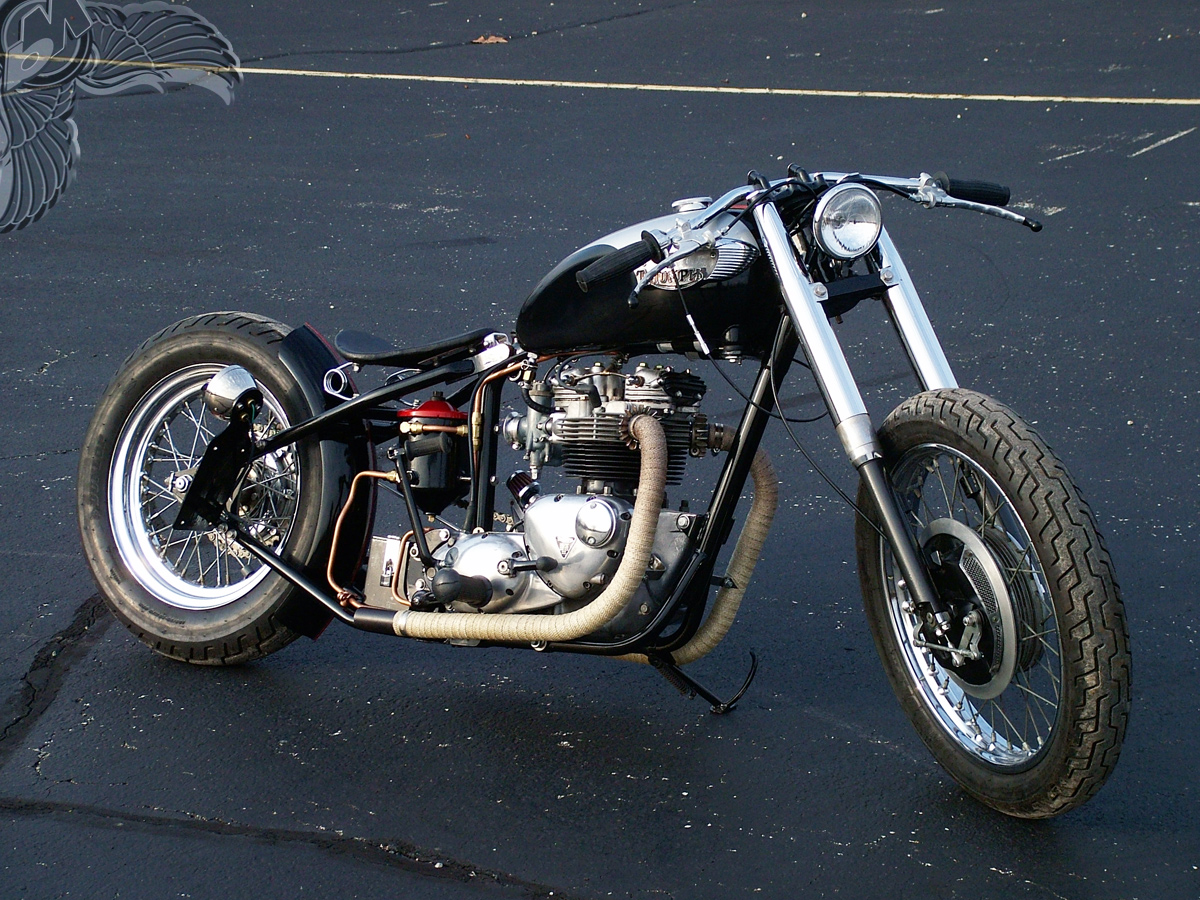 TR: What led you to building custom bobbers, choppers and cafes? Did you take welding or metalwork classes in high school?

DH: I’ve been building bikes professionally for about seven years, but started 17 years ago. I learned most of my fabrication skills working construction for ten years. My boss also had a used car lot and I worked on cars there, too. That and my crew and I would build and rebuild bikes, so that is where I learned most of the stuff. As far as deciding to build bikes? I was a grad student in art school and got kicked out of the program. I needed a job and since I don’t play well with others, I decided to build bikes. I think my time in art school has helped me build bikes that are a little bit different; maybe more refined, or balanced. 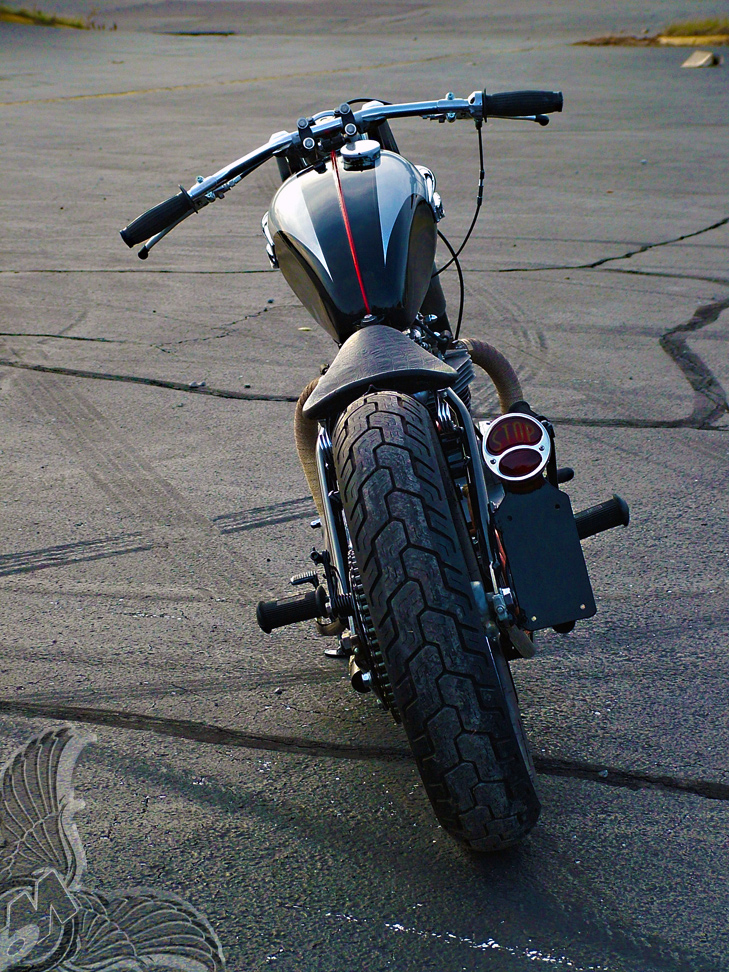 TR: Triumph bobbers seem to be your forte. Why Triumph, and why are all of your bikes black and/or silver? Is it a crush on Hugh Grant?

DH: Black and/or silver looks the best but I did build a black and white one and ummm…. I have a crush on Hugh Grant, and Jude Law, he’s dreamy.

My first bike was a 1984 Honda Shadow 750 but I have always liked Triumphs ever since a buddy of mine had one back in the day. When I started building bikes I started with Harley Sportsters but then one day I was looking for a donor and ran across a Triumph so I figured “what the ****.” The real turning point was when I sold it and made about twice as much profit for the same amount of work as one of the Sportsters. I haven’t looked back since. That and Triumphs are just cool.

TR: Money is cool. Your bikes are incredibly clean and seem to be built to demanding tolerances. What drives you to perfection?

DH: I think it started with my father. He always said “do it right the first time.” When I was working construction our philosophy was “there is the best, and there is everything else.” Art grad school also helped sort of refine my eye, to look deeper and more critically. A buddy of mine always said “if you can’t make good art, at least make sure it’s well crafted.” I try to build bikes that look as if they were built in the factory, and my bikes are better than factory-built. I am a big fan of the understated aesthetic and also a big fan of the arts and crafts movement, where quality in craftsmanship was emphasized.

I have this annoying drive for perfection and always want the next bike to be nicer than the last one. It can get really annoying. I always feel that things can be nicer, more refined, more perfect. I not quite at the point of being in the bathroom scrubbing tiles with a toothbrush, but it’s close.

TR: The Arts and Crafts movement, with it’s distrust of machinery? Hm. And to think I was going to invite you out to score a bunch of meth and pick up hookers on Van Buren, so let’s talk about beer. What are your preferred brews and do you have a favorite spot in metro PHX to hang out? 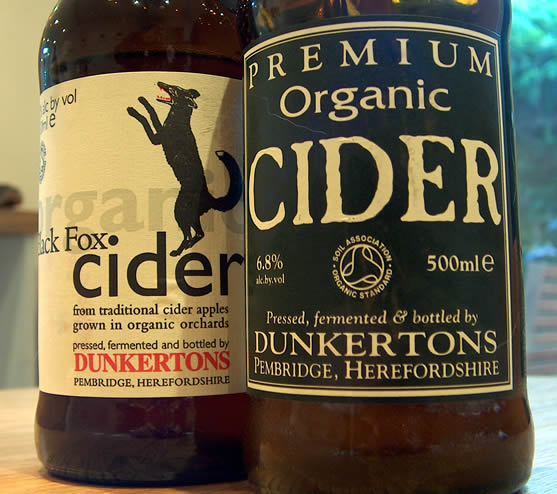 DH: Right now I am on a cider kick, but as far as beer goes, I’m a big fan of Wheat beers. I am glad that there are finally some decent brewers here in the States. If I do hang out it’s usually at TT Roadhouse, that’s where most of my friends hang. But really I don’t get out much, I have too much sh*t to do.

TR: I drink Blue Moon sometimes. it’s the only wheat beer I can stand. I like TT. Cool staff and crowd there, and the owner owns a few bikes, including a first-generation Confederate Hellcat. A lot of Brit and metric motorbikes there.

I understand that GTP is building a CB750 chopper with your help. What embarrassing things can you tell us about George and his project?

earl grey playing with his nipple

DH: I think the only thing I can say because of the confidentiality clause in our contract is that George likes Earl Grey tea with cream and sugar. He raises his pinky when he drinks it and he uses a saucer. He takes his tea very seriously.

TR: Summer in Phoenix sucks. Do you ride often, or only when it’s under 90 degrees?

DH: I don’t. Right now my bike, a 1980 Harley FXWG is in a million pieces and parked in the living room. It’s the whole “the shoemaker’s kids wear flip flops” thing. Rumor has it that air-cooled motors don’t like the summers here, so I would like to get a water-cooled bike, like a Triumph Daytona or a GSXR 750 or an R1 or a CBR or maybe a Hayabusa or ummm…..

TR: You like the crotch rockets, eh? Interesting. I vote for the Daytona.

I’ve been thinking about overthrowing the government and enslaving their corporate masters. Do you have any advice for the amateur revolutionary?

DH: I would suggest moving to a country that understands the true meaning of freedom and independence, not one that thinks its citizens are there to be serfs for corporations.

TR: Yeah. Corporations are not “the people.” Do you rebuild the motors of the bikes you build? 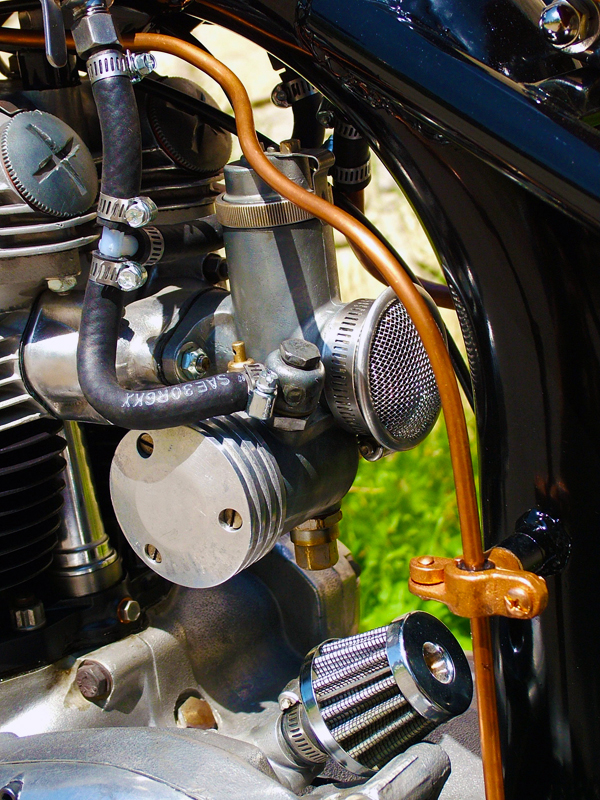 DH: Yes from the crank up, for the most part. Some people don’t want me to, and to save money I suggest re-doing the top end and make the rest look pretty. This is a bad idea as it will cost more in the long run….. A lot more.

TR: What is the hardest thing to repair and what are common problems you find with donor bikes?

DH: A lot of people think frames are the hardest things to fix but they are fairly easy, you just cut out what’s f**ked up and replace it. I think the motor is the “hardest.” You never know what is going on in there until you tear it apart. Sometimes everything is kosher, sometimes you replace everything, getting everything machined is big bucks. Really I am not a “motor guy.” I can build them and rebuild them very well, but it’s just not my forte.

I don’t normally have huge issues with donor bikes, since I am not looking to restore with all original parts, so if something is ruined I usually can buy the part. But it’s usually the motor. I have bought a few donors with a “rebuilt motor” that couldn’t make it around the block. Finding a donor for a decent price is the hardest part. A lot of guys think their **** is gold.

TR: Gold turds…. I wish. What is your favorite tool? 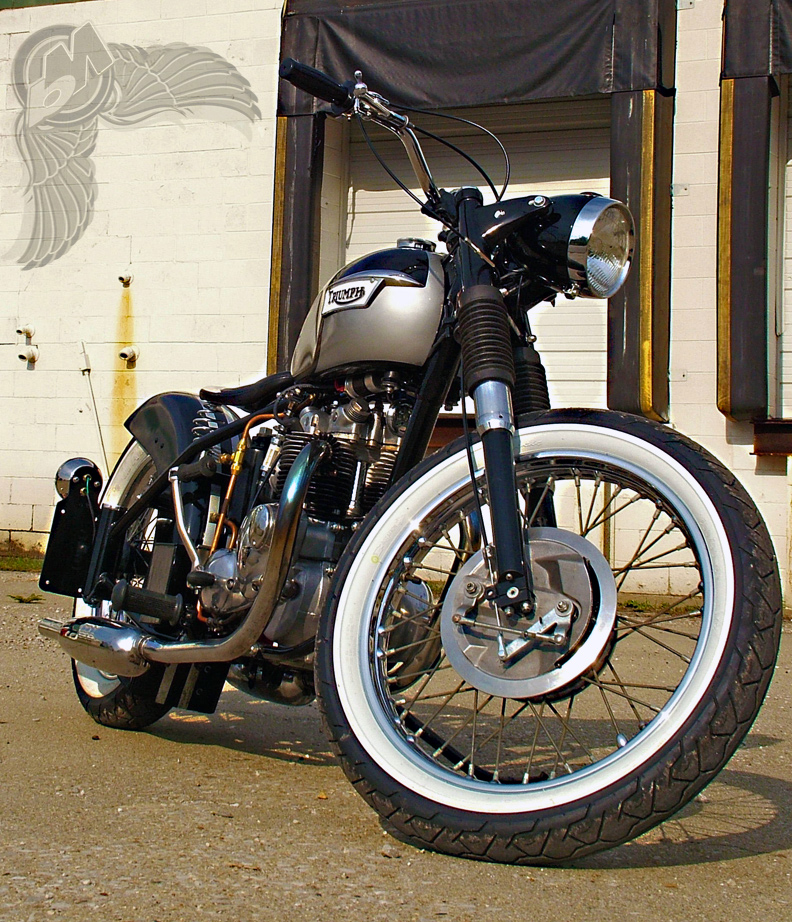 DH: My hand file, but my DeWalt cordless impact is a close second, though. I also listen to a lot of Tool in the shop. A lot of Tool.

TR: Please tell us why Honda is superior to Triumph.

DH: Depending what you want to compare…. ummmm…. let’s see…. Hondas have better brakes, more horsepower, cheaper parts, overhead cams, require less maintenance, less vibrations, are more comfortable, possess better build quality, did I mention more reliable? And then there are the crazy things they do, like use oil filters, a standard thread type, electronic ignition, starter motors, and stuff like that.

Other than that, Triumphs are far superior. The only real problem with Hondas is that they are kind of generic and soulless. 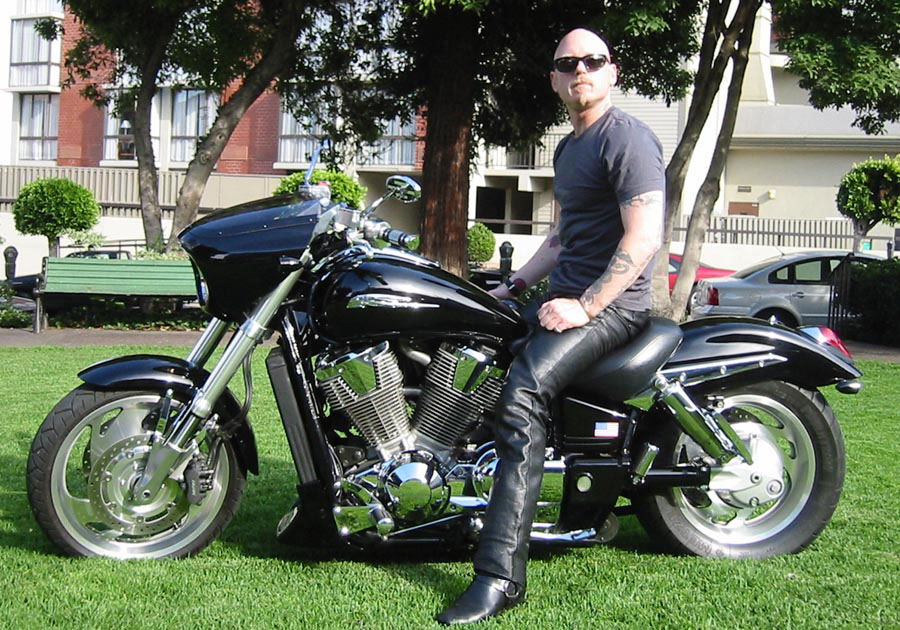 TR: Hey, you’re the guy who admitted to wanting a freaking ‘Busa and drinking cider. Sheesh. Besides, the VTX I rode for eight years was a hot kinky chick magnet. Is there a bike you’ve dreamt of working on? What would you do with it?

DH: That I have dreamt of “working” on? No, I dream of having somebody work on bikes for me! Are there any bikes that I dream of building? Yes. I have an idea for an XS650 or a Kawasaki W1 that will be something a bit more modern and slick. I really want to build a BMW bobber. At some point I would like to build a Triumph for myself. I have enough ideas to last me at least one lifetime, so if there is anyone who is looking to sponsor a bike builder. 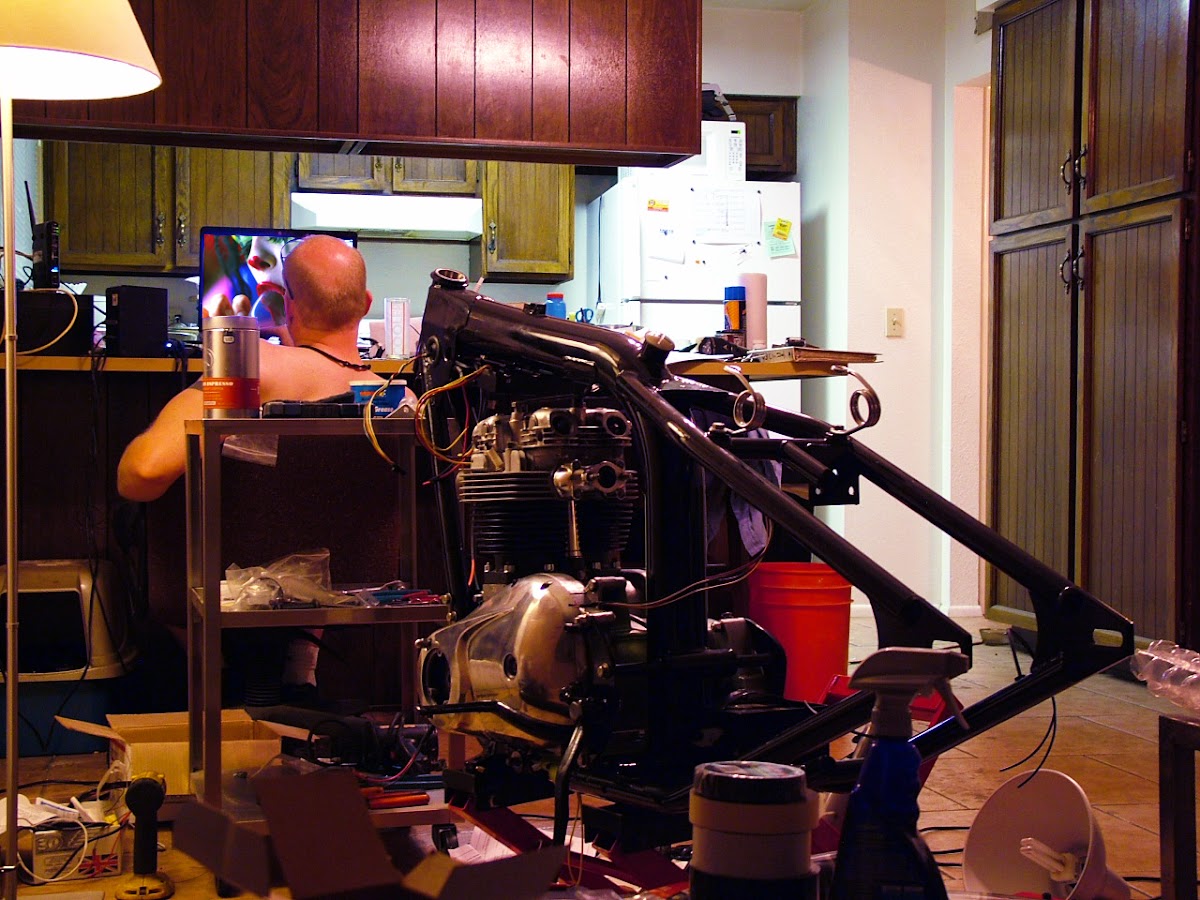 dave researches stuff on the computer

TR: I might be able to help you there, man…

DH: What would I do with it? Uh, ride the sh*t out of it. Then sell it, or park it in the living room.

If I could buy any bike I’d like a Ducati Desmosedici or their 1198. 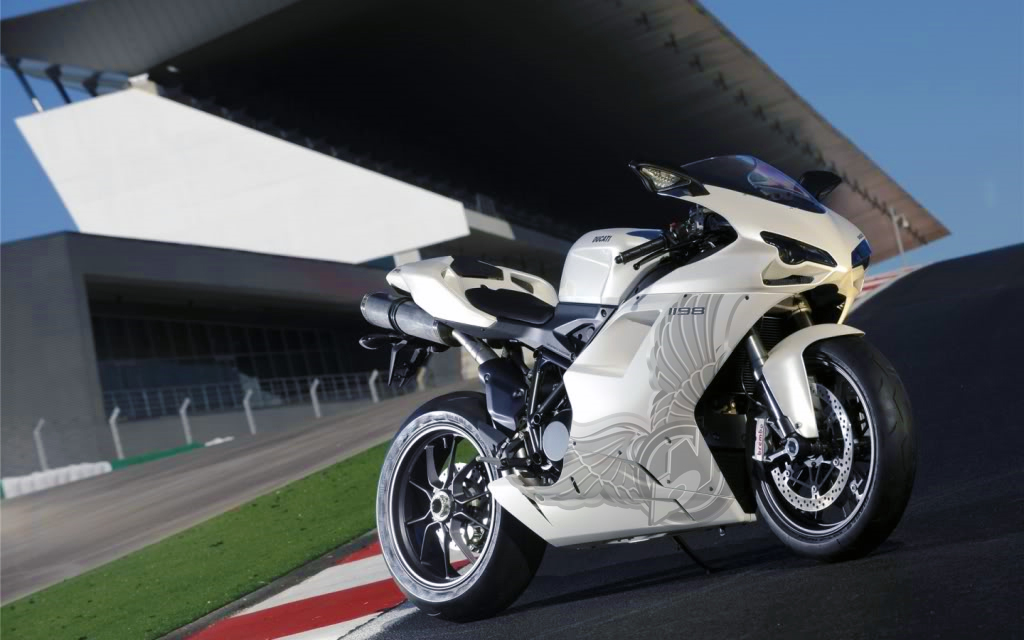 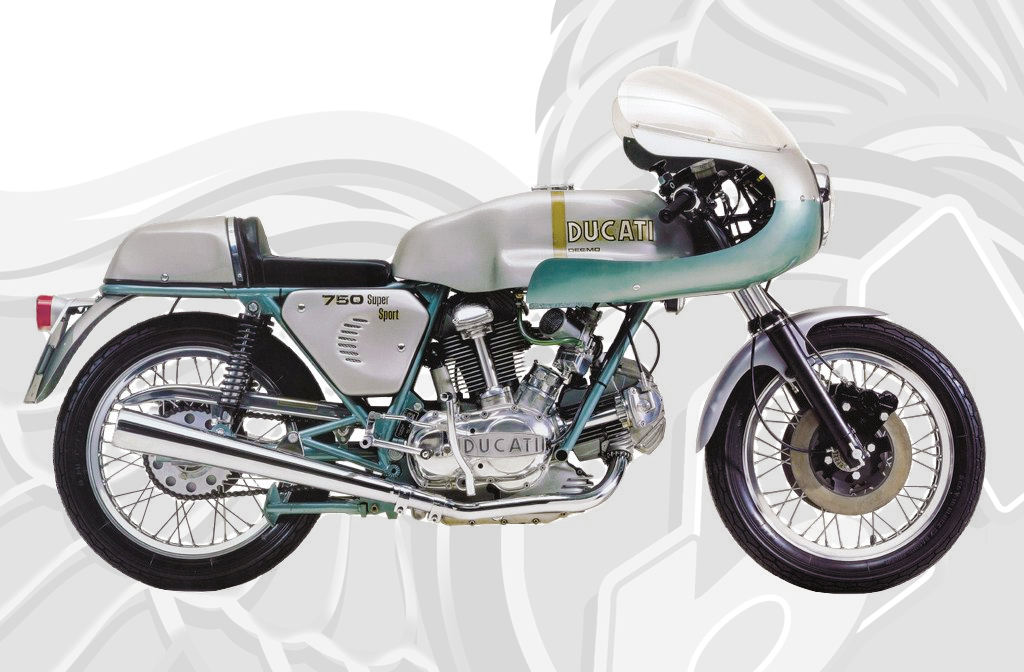 Right on, Dave. Thanks for playing. We’ll have to hook up the next time I’m in PHX and hit the Hi Liter with my best friend Sose. Say hello to GTP for me and tell him to heal up so he can come along, too.