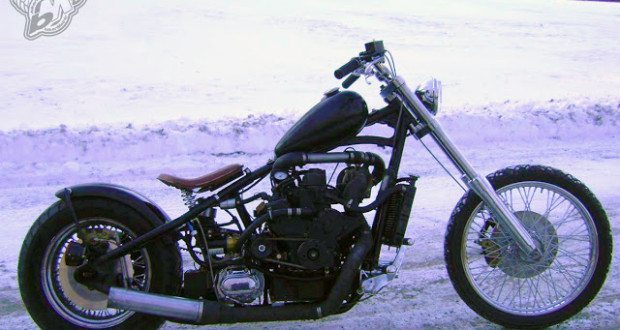 friday’s post of cool stuff #68: nothing about hurting bankers!

but start drinking beer now. this gets pretty good at the end….

since receiving pix and info from reader ray and finding this gem earlier in the week, i’ve become fascinated with diesel-powered motorcycles, so i spent much of the past couple of days doing a little reseach to find out more. 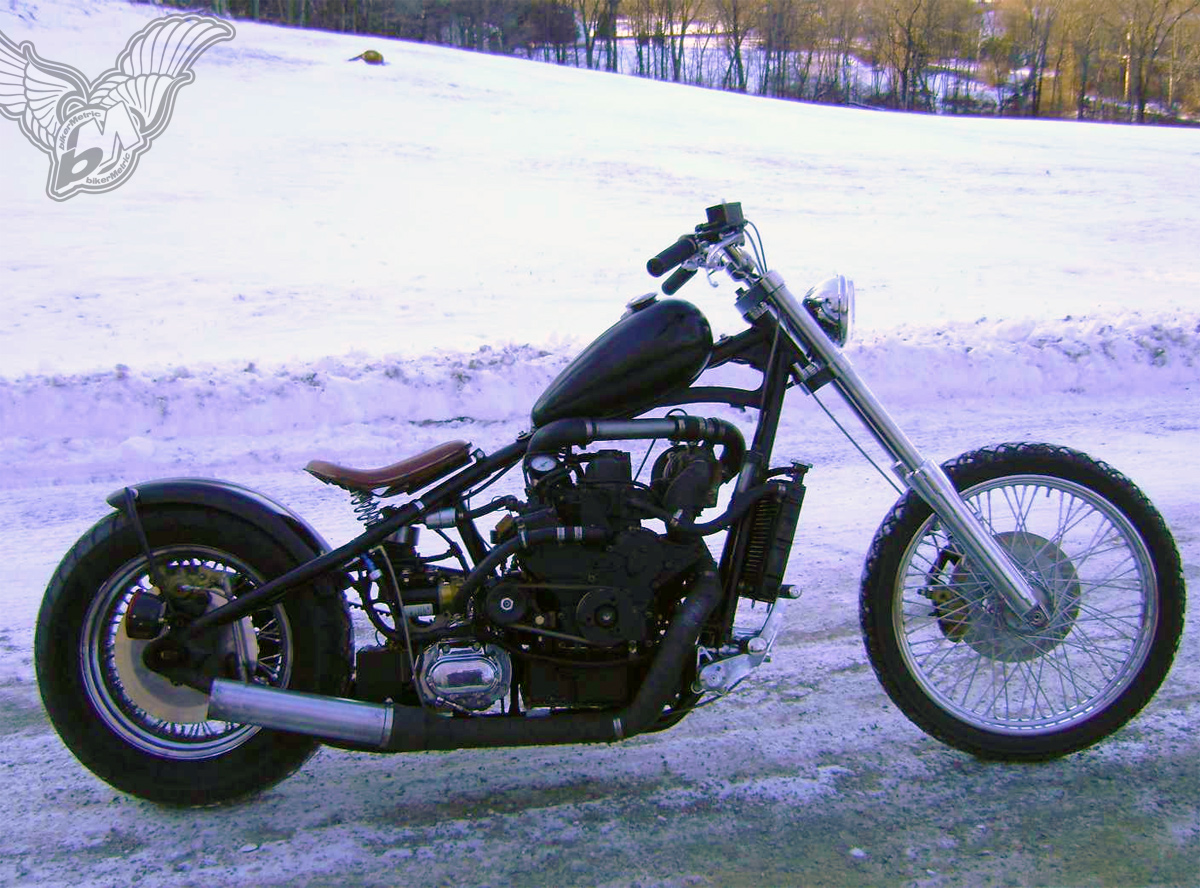 that’s another turbo diesel, but built by a guy who goes by the name of “dethmachinefab.” according to him, the motorbike started with a chassis he ordered online and cut up “in ways most would cringe to.” he fitted a three cylinder yanmar thermo king diesel from an 18-wheeler’s reefer unit. he bought parts and began to cut, weld, machine, and bolt them together in a working fashion.

it seems that after much trial and error he got everything working before he took it all apart for painting.

the motor is a 1000cc. he’s running a six speed transmission with a 3.35″ open primary. he fit a gt15 turbo to the engine, redesigned the oil pan, made fuel system mods, gave it an hydraulic clutch, installed an electric remote water pump, and more junk he didn’t care to list. 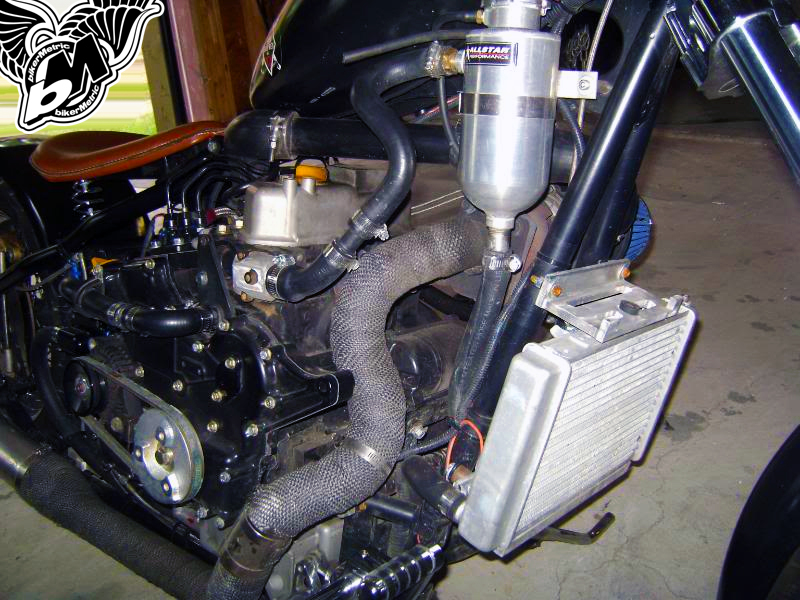 his machine was dynoed to have 37 horespower at 3800 rpm at the rear wheel with about 70 ft/lbs of torque.

here is a build thread on pirate 4×4. 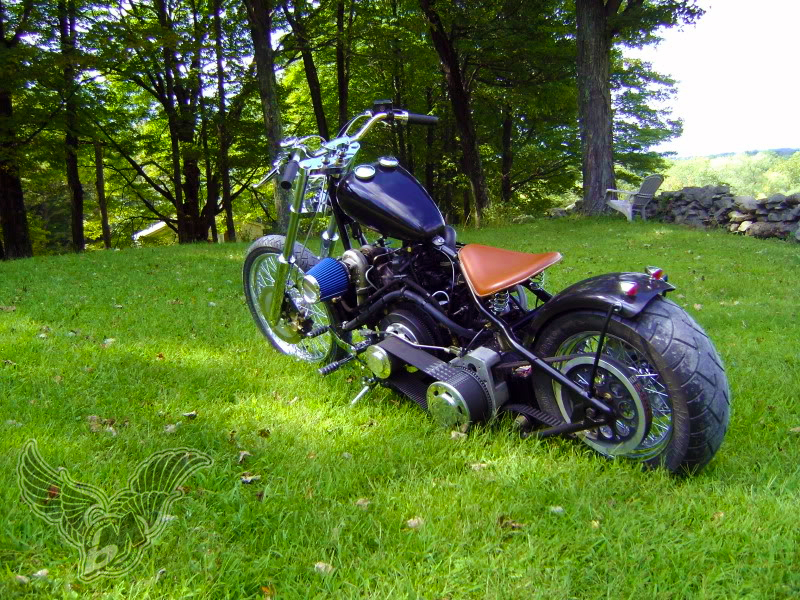 and another by dethmachinefab, a caterpillar diesel motorcycle:

now for a couple pix i found of diesel-powered motorcycles of the swap meet crappy kind: 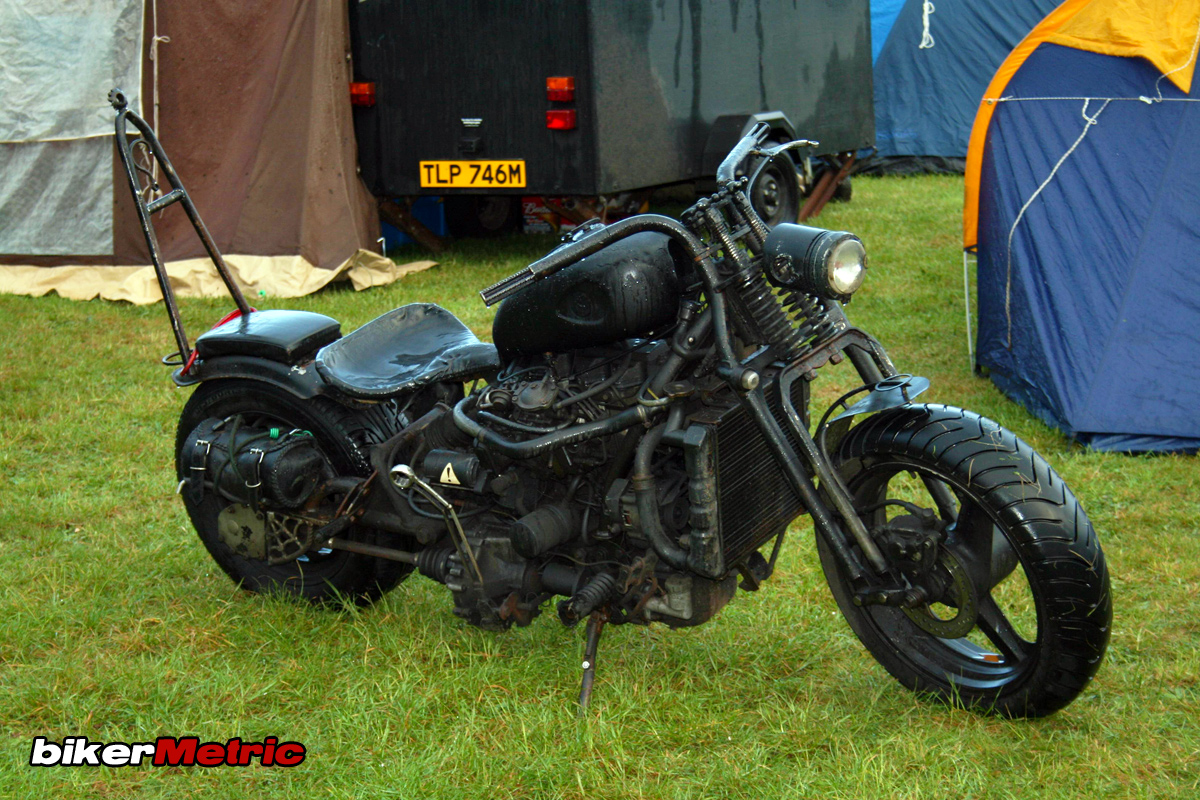 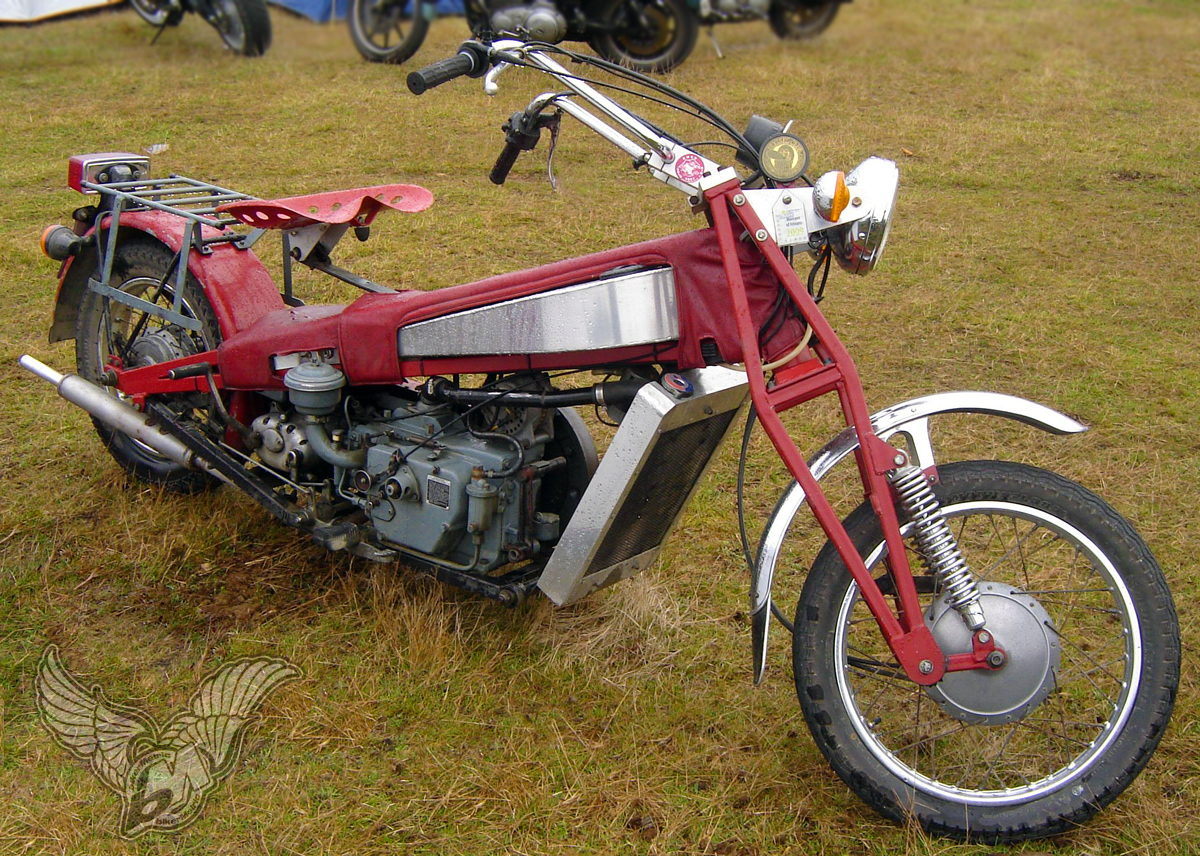 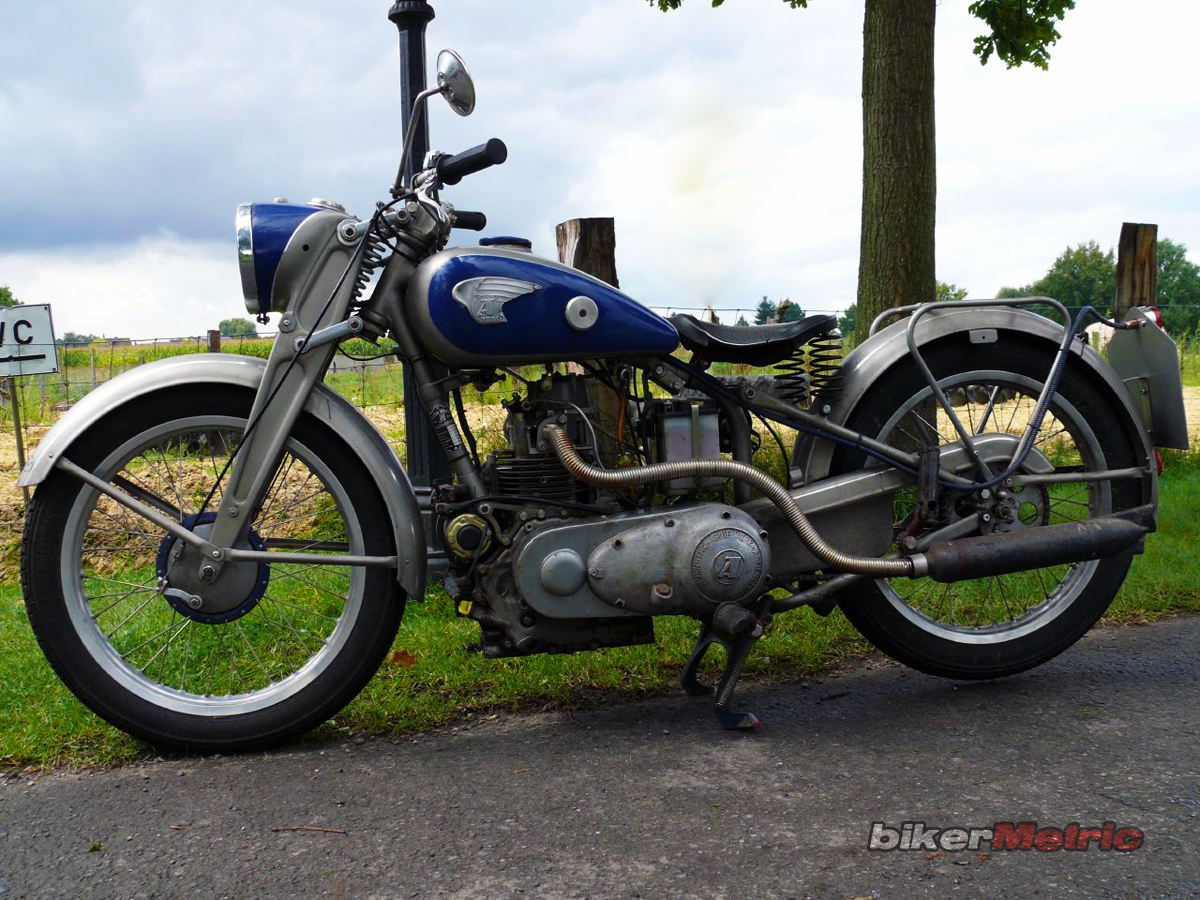 i’d like to send you mofos to a cool blog run by a dude named andraz. he’s from slovenia and he emailed me in october. he rides a clean little honda cm400. 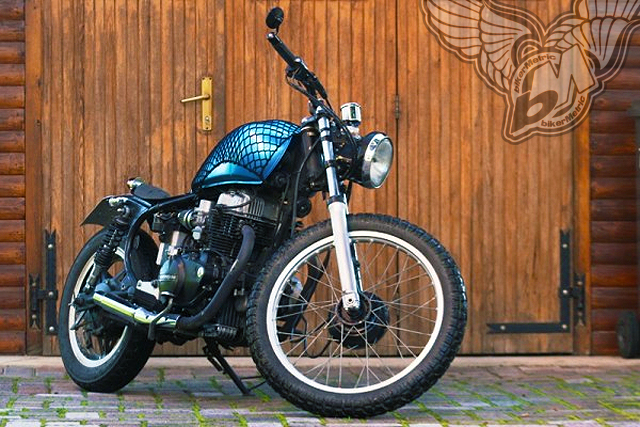 he plans on turning that bike into something that resembles the sketch below. i’ll be looking forward to it. be sure to check andraz out at 7seven.blogspot.si.

dig this sculpture. the guy who made them is making 52 bikes, all of different design, and donating all of the proceeds to charity, one being a dog rescue. 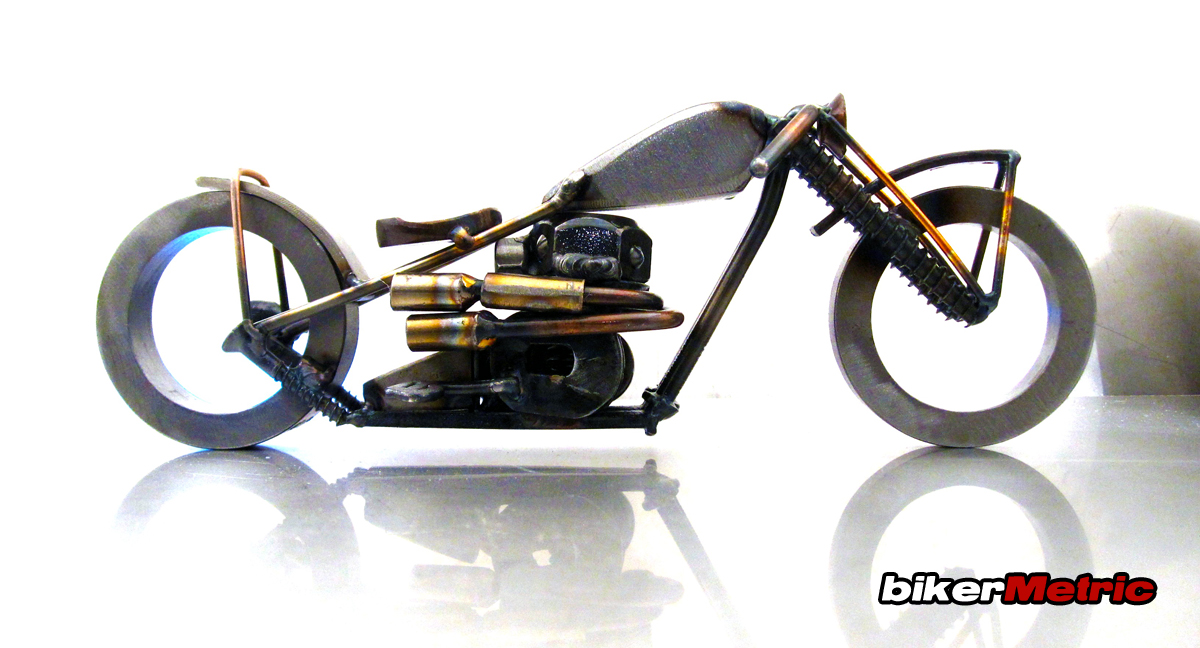 his name is josh and you can find out more about him and his work at brown dog welding out of metro detroit. besides cycle art, he makes a ton of cool stuff. to purchase a bike sculpture and help out an abused or abandoned dog in the process, visit his online store and do the good thing. 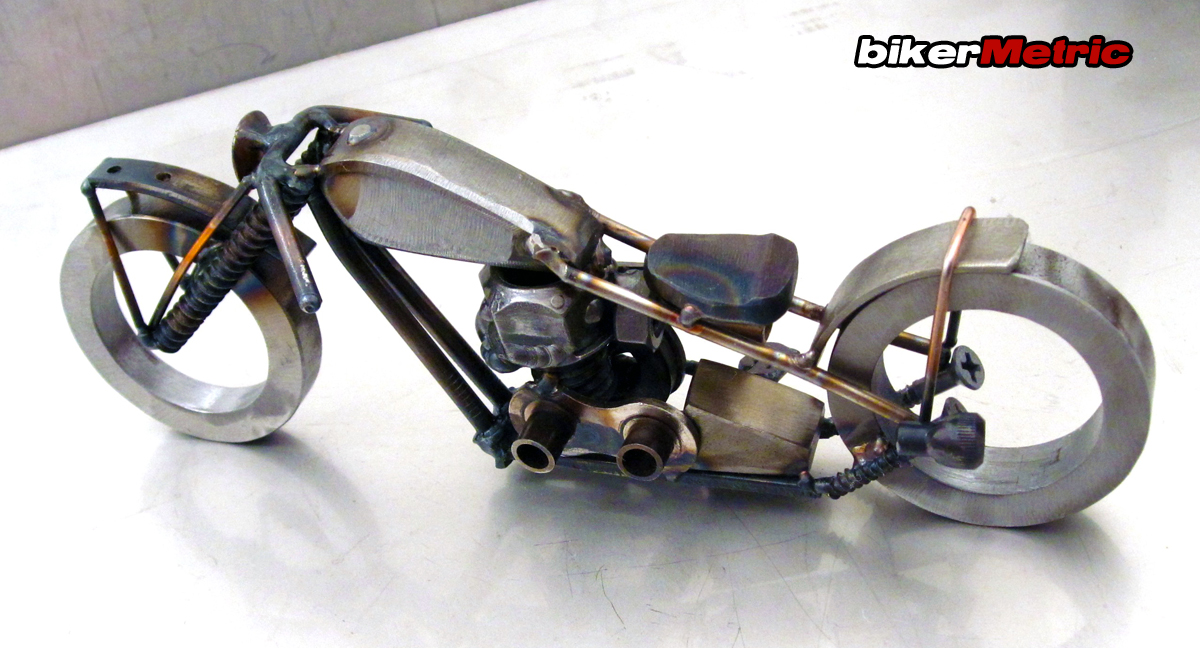 sticking to the artsy stuff, here is a custom painted helmet by death spray custom: 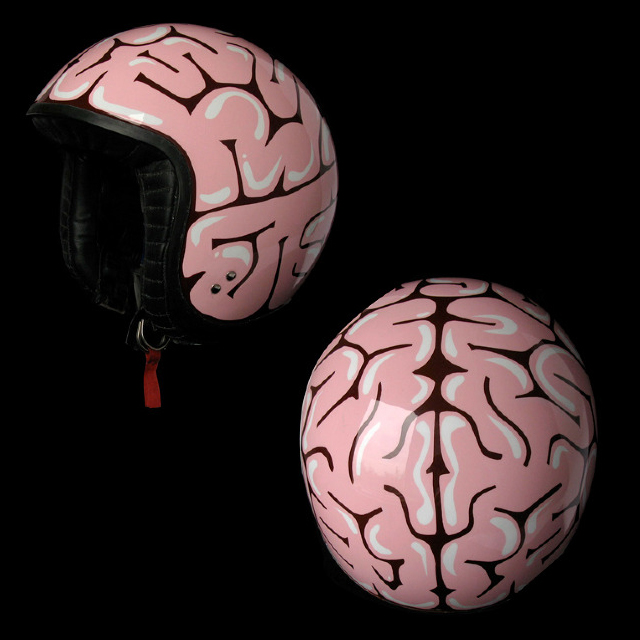 that makes me think of zombies, which makes me hungry….

once, many years ago, i was at a truck stop once and on the menu they had pig brains and eggs. i was mighty tempted, but decided to order steak and eggs instead.

finally, if you guys come by on wednesday, january 18 and there is nothing here, no worries. i am going to contact my tech meister and see if we can have a one-page shout out/f**k you to the government seeking to censor the internet. i will be doing this along with many sites that matter, including reddit, tucows, and move on in protest of two bills being debated in the house and senate that would give our government the ability to do what they have condemned other countries for doing; namely shut down and/or make it difficult for you to visit websites our “leaders” find troublesome.

those of you who re-post copyrighted images, show nudity, rant about freedom, or call for the repeal of unconstitutional “laws” such as the “patriot act,” “citizens united,” or “the national defense authorization act,” can and will be shut down if these bills become “law.”

i implore those of you who have the ability/tech savvy to either take your site down for a while this wednesday, or place the image below your index page and stay off line for the rest of the day.

we will not be shut up, put down, spied upon, jailed, or killed for our views. thank you.

if you want a larger image than the graphic below, email me and i will be happy to send you one as big as you like.

see? nothing about bankers. until now. and this doesn’t count.