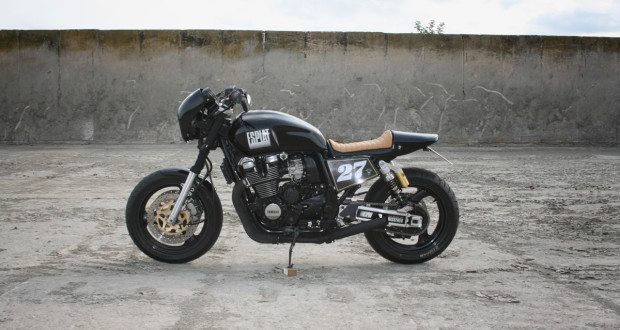 Daniel Schuh is a graphic designer and motorcycle enthusiast based in North East Germany. He fell in love with anything two-wheeled since he was a child. Be it BMX bikes, motocross, downhill mountainbike, it was all fascinating to him.

In winter 2014 his garage became his second home, and his custom Yamaha XJR 1200 was born.

bikerMetric: Alright, Mr. Schuh, a custom Yamaha XJR isn’t a common on bikerMetric. Tell us a little about what you were going for.

Daniel: I was inspired by my downhill racing background, as well as by motocross and speedway bikes. I like rideable bikes, and I don’t like fancy colors. Black is Beautiful ;) 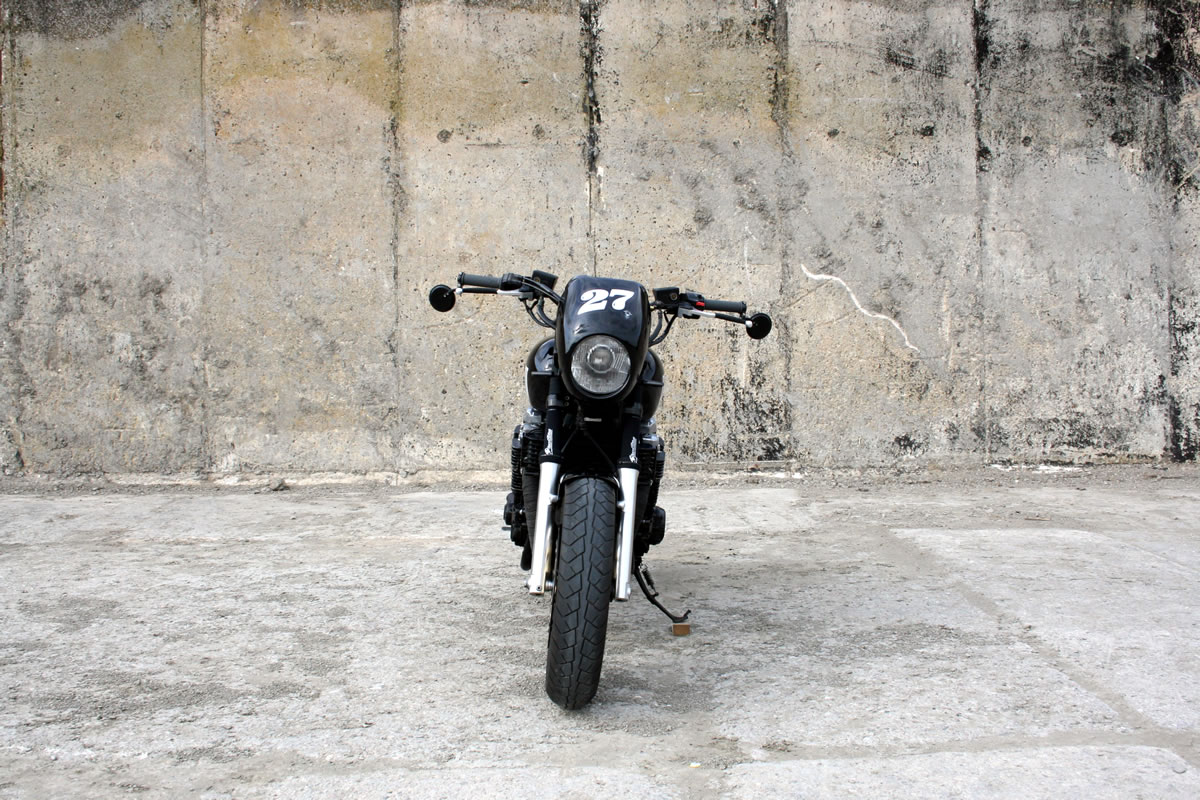 bikerMetric: What were you going for, and how did you manage the budget?

Daniel: The budget I set shouldn’t limit my ideas but remain manageable. I wanted a custom motorcycle with power, with approx. 750-1300 ccm and a 4 cylinder engine like my favorite motorcycles from Japan. I wanted it to be made in 1995 or earlier. One day the phone rang and my buddy, Toni, a motorcycle dealer called. 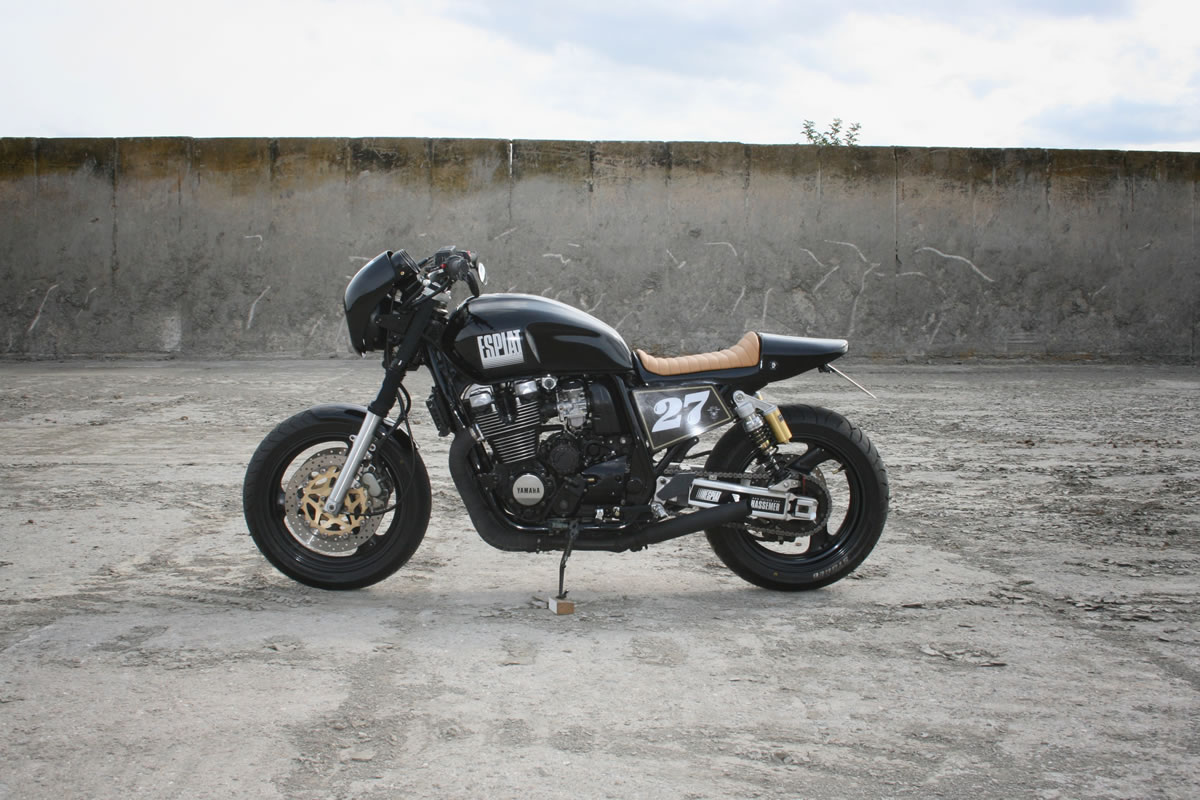 “Daniel I have 2 very interesting bikes for you.” he said. Toni had a XJR 1200 built in 1994 and CB 750 built in 1998. Both bikes were in good condition and technically ok. It didnt take much time before I decided and chose the XJR 1200. In my opinion the XJR engine is one of the most beautiful air-cooled 4- cylinder engines out there and and I couldn’t wait to start with the design sketches.

My goal was a cool everyday motorcycle, that perfect fits to me.

bikerMetric: What kind of shape was the bike in cosmetically?

Daniel: I was thrilled by the processing quality of the nineties Yamaha. no rust really nowhere!

bikerMetric: What did it take to turn it into the custom Yamaha XJR of your dreams?

Daniel: A new tail and the number plates were formed with fiber plastics. The miniature LED taillight was fitted directly in the tail. The rear bench seat was fixed over the seat lock and disassembled for maintenance with a handle. To keep the motorcycle center of gravity as low as possible the battery was left in place and raised only by 1 cm. Now the bike is 20kg lighter. The results are noticeable advantages in handling. 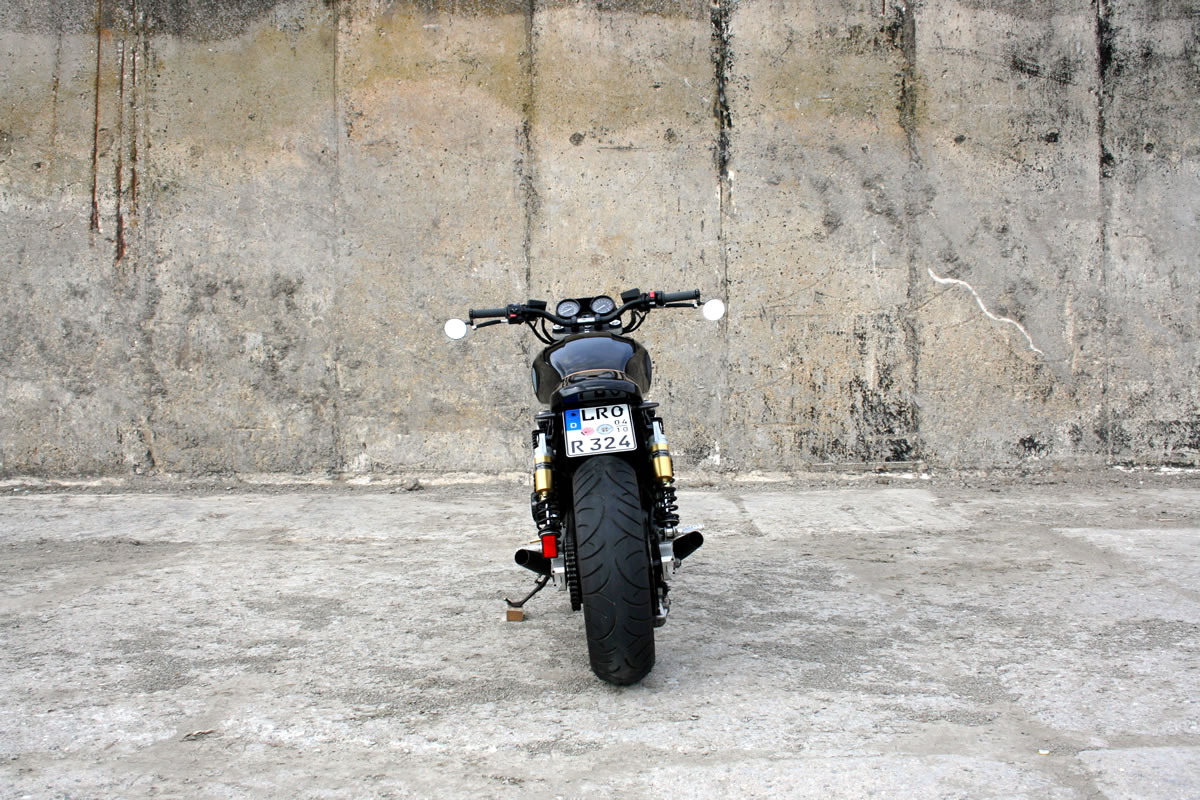 The seating position is 3 cm lower than the original. In interaction with the Renthal MX handlebar the perfect driving position for me. I converted original XJR foot pegs with the unique cartridge cases shifter. This completes the old school vintage racing look. I optimized a lot more details. Bar end mirrors were added to keep the front end looking low and a bikini fairing mounted to add a touch of classic racer look. The exhaust headers were wrapped and the factory mufflers replaced with throatier sounding ones. 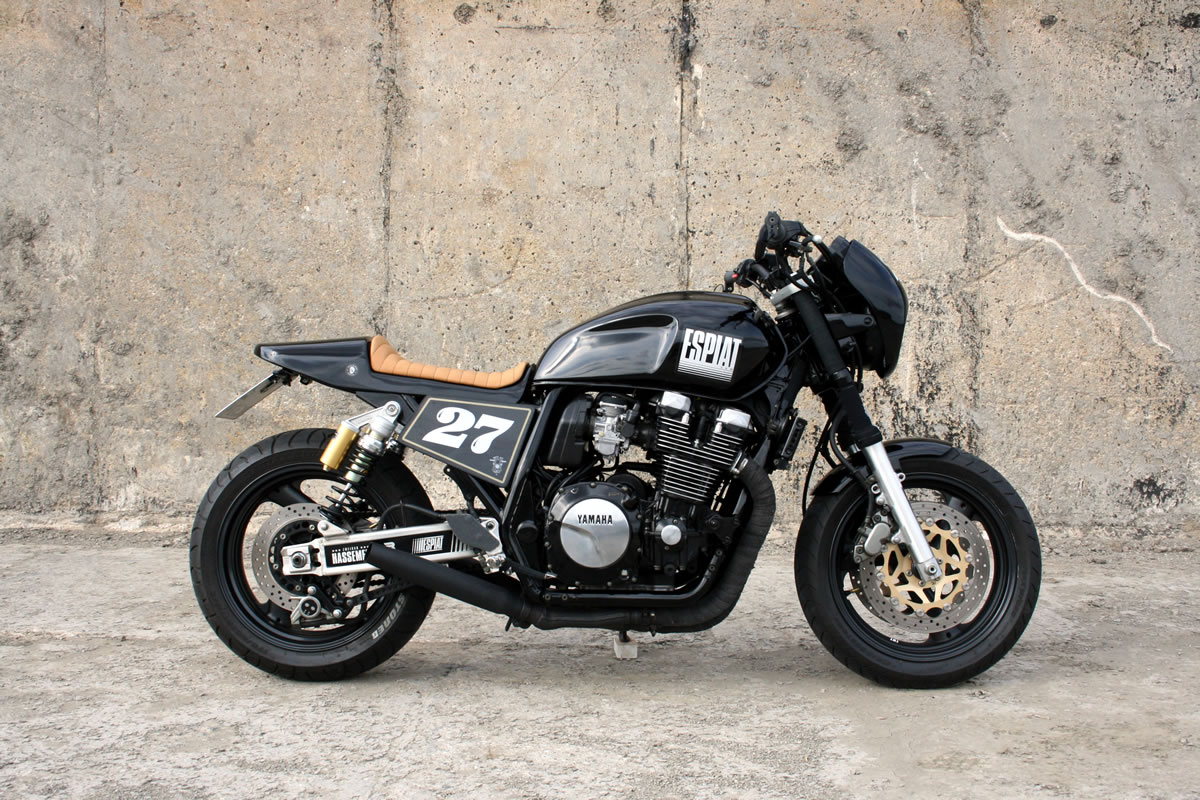 Daniel: In winter 2014/2015 during the customizing process I destroyed a lot of beer with my buddy Gunnar. Gunnar helped me a lot to maintained the beer level ;)

Daniel: I love the sound. It’s deep and powerful but not uncomfortably loud. Just the real 1,200 ccm. I love it seriously. 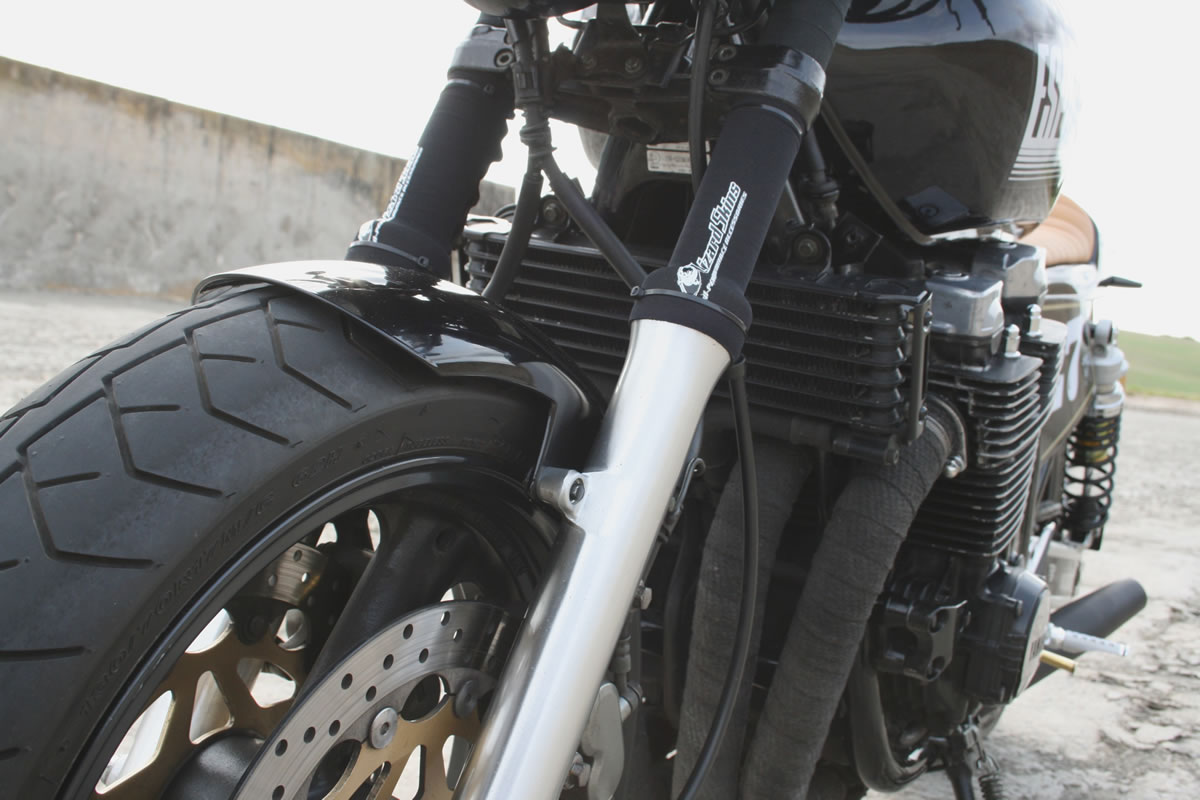 bikerMetric: Have you thought about selling it?

Daniel: I had quite a few offers. But I could not get it till now. Maybe next year, we will see.

bikerMetric: You can ask for a lot more now that it’s world famous! What’s your next build going to be?

Daniel: I think the Yamaha XV 950 is interesting to customize. I also have ideas for a completely different XJR 1200 that’s more radical and more progressive.

bikerMetric: Know what time it is? Shout-out-o’clock! Who do you want to give a shout out to?

Daniel: Thanks to Gunnar for the tasty beer. To Tony, my bike dealer, who found the XJR for me. To my father and my uncle for teaching me to handle tools in my early years. To Torsten for the great paint result. 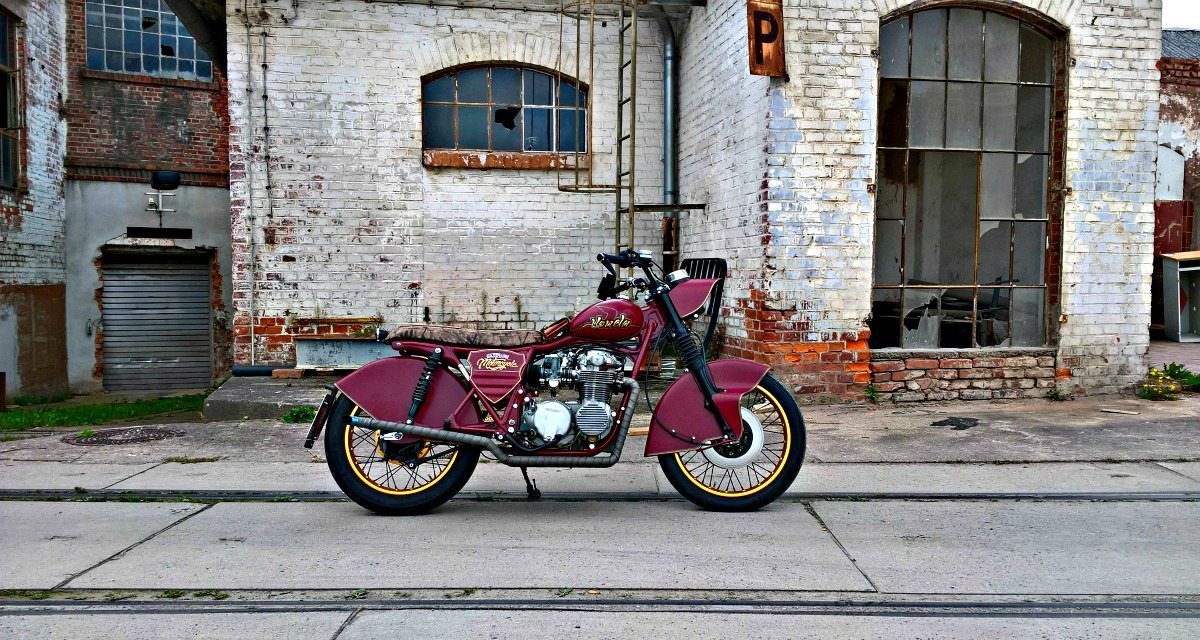 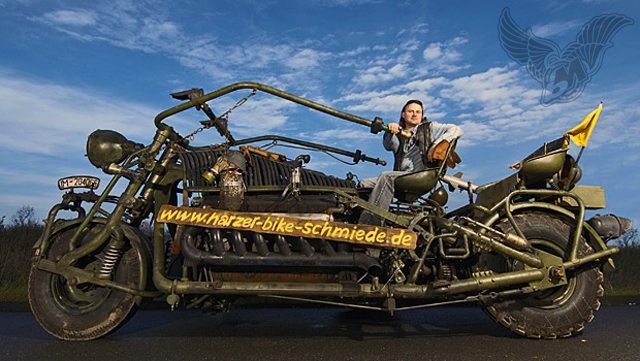 have some mental motorcycle madness, mofos. this is a freaking giant ratbike ...