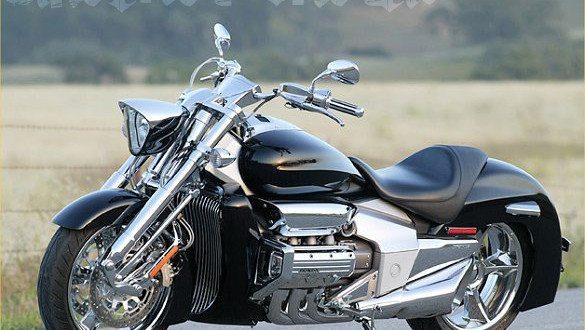 It was a simpler time. In 2004, we had jobs, banks didn’t need our tax dollars, Detroit wasn’t financially bankrupt, and we decided what the ****, give him four more years to find the weapons of mass distraction. We were carefree and dancing all over our credit card statements in our brand new houses.

It was when Honda ruled the metric v-twin market. Their VTX 1800 was introduced three years earlier as the largest mass-produced v-twin in the world. Back in those days, when children listened to their elders and stayed off my lawn, the VTX was the metric cruiser gold standard. It’s entrance into the cruiser market defined a new generation of metrics; the power cruiser. Suddenly manufacturers around the world were launching their own versions, and many tried building even bigger engines. Some companies like Kawasaki went and created lighter, smaller and more nimble power cruisers while others such as Triumph sought to build even bigger bikes than the VTX.

Then Honda came out with the Rune. The powerplant wasn’t special, it was the bike’s design and engineering. It screamed “custom” unlike any bike that was ever manufactured. I had the pleasure of riding one for an afternoon in 2003 and loved everything about it. 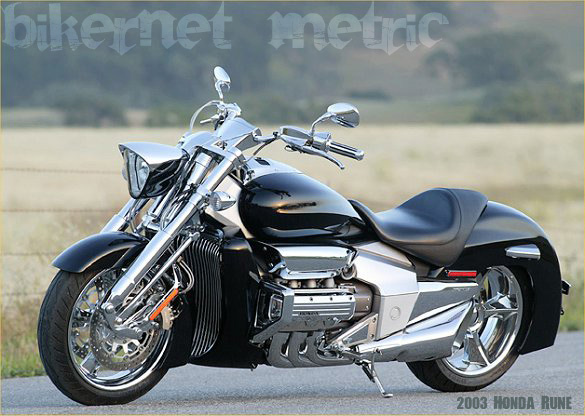 The Rune was pretty pricey and while not a big-seller, it made Honda the leading international motorcycle builder by creating a radical design and not playing it safe. Some loved the Rune, some hated it, but everybody talked about it when one was spotted. Honda thought they could take some of the Rune’s innovations and apply them to the VTX.

In 2004, nobody saw the coming of the end of the world. Instead, Honda wanted to introduce a motorcycle that would take the power cruiser to another extreme, an extreme they were determined to define. The mood in this segment was like the early 1970’s with muscle cars. Instead of Chargers and Mustangs it was Warriors and Mean Streaks and if there was a bike to kick all other power cruiser’s *****, this was it. 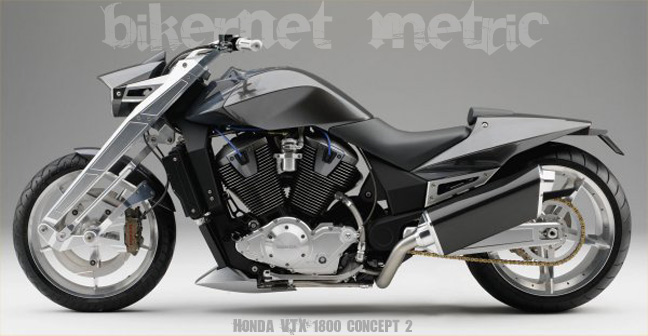 This drag-styled bruiser was a VTX 1800 motor with a lot of tweaking in a modular frame made of aluminum and carbon fiber. As recently as January, 2006 there were rumors that Honda was going to produce this bike with a turbocharger. Wow. Talk about a killer. This bike was already chain-driven and while not as technologically advanced as a shaft, a chain provides over 20% more power to the wheel than a shaft.

Speaking of the wheel, they were cut from solid blocks of aluminum and the 230 mm rear had no hub. Nope. Nada. Dig this: 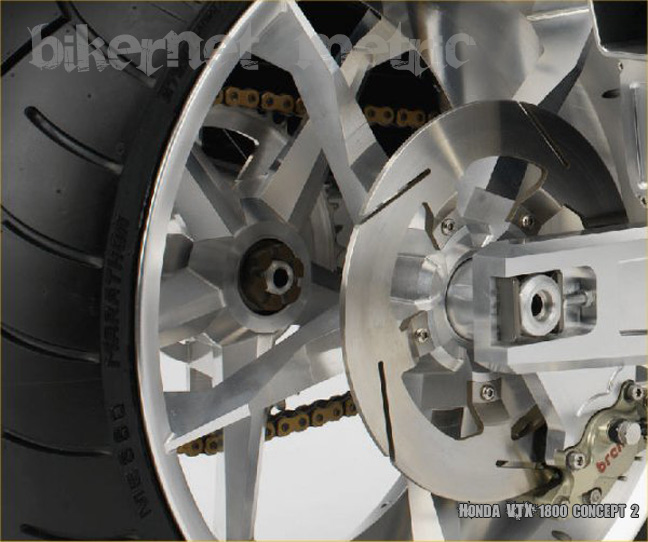 Honda called it a “split hub.” It wasn’t completely new, but on a major manufacturer’s concept, it was extremely rare.

The boxy radiator of current VTX production bikes was replaced with two curved, trapezoidal pieces that did not look like an afterthought next to the trailing-link front suspension, also cut from solid blocks of aluminum, as were many other parts on the bike, including the swingarm. 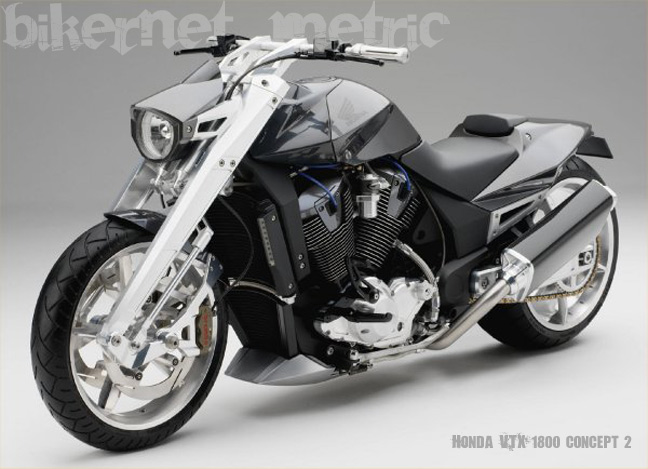 It had drag bars, a carbon fiber gas tank and dual exhaust, which was curved around the transmission and primary like it was bent by a custom builder from Southern California. It had styling like it belonged in Batman’s garage. Where is the suspension? It’s hidden beneath the lightweight carbon fiber body, carved in masculine angles. It looked faster than anything else, simply sitting still. 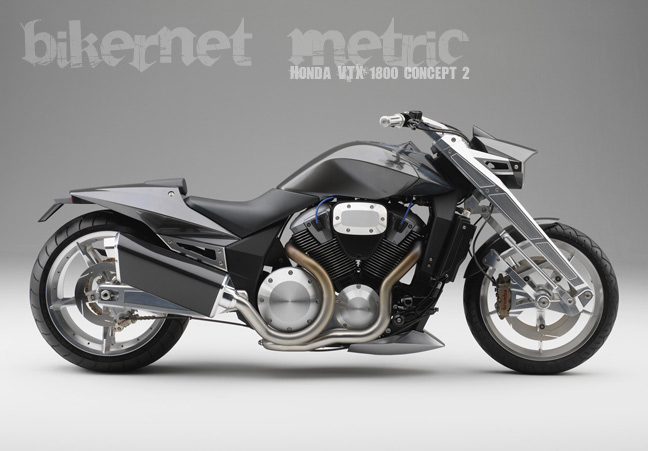 It looked fast because anybody who knew anything about cruisers would understand that a VTX 1800 chain drive would make 120 horsepower and 140 ft/lbs of torque on a dynamometer with an aftermarket custom fuel map. Having owned a 2002 VTX 1800C with a custom map that makes 118 ft/lbs, I can’t imagine that kind of power, much less mated to a frame and body that weighs 100 pounds less.

Then everything stopped. It seems that there were a lot of morally bankrupt people out there and a lot more who believed them. Mortgage payments ballooned and then….POP! Honda closed down their Marysville, Ohio plant this year and as of yet has to re-start production of the VTX 1800. To stay relevant in the cruiser marketplace, they came out with three brand new models using the same VTX 1300 engine. Don’t fool yourself into thinking these new Hondas are power cruisers. They are not as agile as a V-Rod, nor as powerful as a M109. They’re just reliable, middle-sized, well-priced bikes with a little more rake and trail than any Honda before them.

It seems like a risky bet to think the Concept 2 will be produced any time soon, but I cannot help thinking that it is exactly what Honda needs to do. 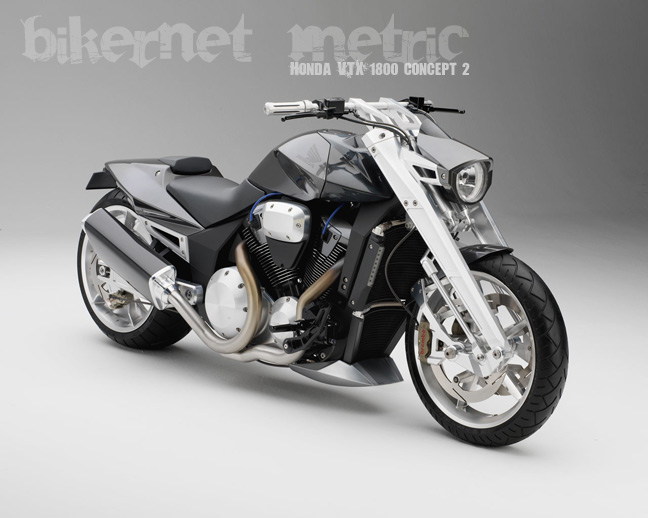 First, even with all the innovative aluminum design and mechanical elements, why can’t it cost 18 or 20 grand? It doesn’t need to be a huge bargain, which is relative, considering that a basic Brass ***** (*** bless ’em!) will cost 16k and it won’t even have a rear suspension and will consist mostly of technology that’s about 100 years old. Even a basic V-Rod Muscle, which would get beaten like an ugly, retarded step-child by a Honda Concept 2, is over 17k, and that’s before the owner does any customization do it. Can you say, “twenty grand out the door?”

That’s the segment Honda needs the to market the 1800 to, not entry-level chopper buyers. In this economy, who is buying their first motorcycle, anyway, and paying 14 grand for it? Honda’s Fury and 2010 1300-powered cruisers should have been built in 2003, when the chopper craze was still building.

I know, hindsight is 20/20 but I am far from the only bike writer that’s stated this opinion.

With that in mind, the riders for such an extreme machine as the Concept 2 aren’t the “my first chopper” club that Honda is marketing the Fury, Sabre, Stateline and Interstate to. Sure, 1800 sales have dropped like Washington Mutual stock but that is only because Honda gave up. They quit innovating, closed up the American shop and cranked out a bunch of bikes about which my wife says, “they look Japanese.” 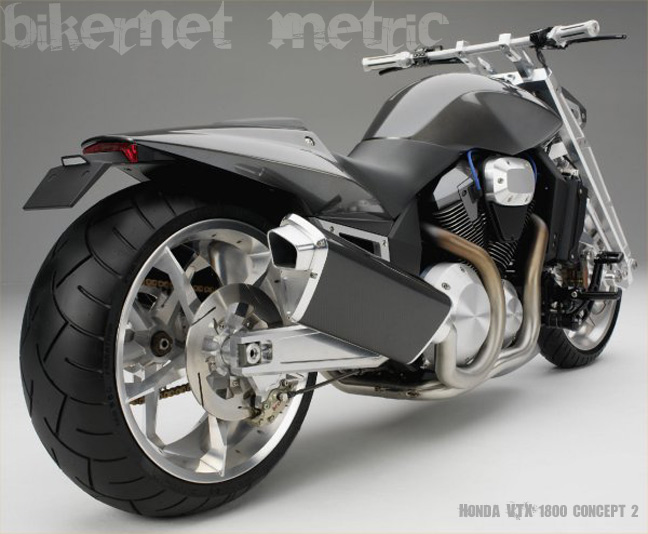 Honda, who else is going to produce a cruiser in such an American-inspired drag bike style? Yes, I wrote “American.” The original VTX was designed by American dudes in So Cal, not *** cats in Tokyo, and they were manufactured and assembled in Ohio. The Concept 2 was also designed and built in the United States.

Seriously. The concept of a huge motor in a drag-styled motorbike was bank-rolled by Honda, changing the cruiser industry forever. There are still a bunch of bikes from every major cruiser manufacturer that fit in the power cruiser segment that have more cubic centimeters, more mechanical innovations, and more style. Honda, don’t be left out of the segment you created! 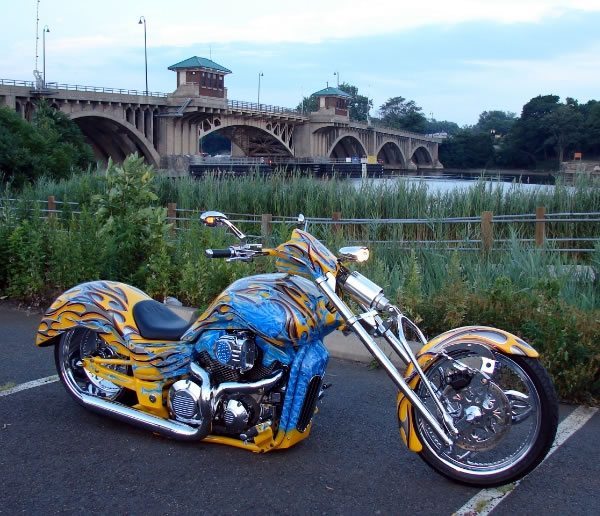 Got a new email about a custom Honda VTX1300R Chopper from David ...