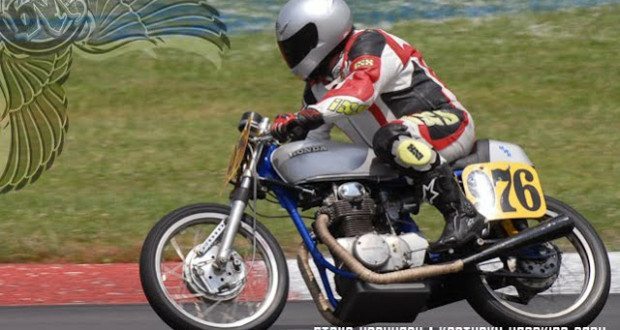 As some of you remember, bikerMetric and Bikernet are sponsoring race teams to compete against each other in the WERA motorcycle roadracing circuit. It all started when Bandit shot me an email about Flat Rat Racing and I created a nice little post for them. You can read about it by clicking here. 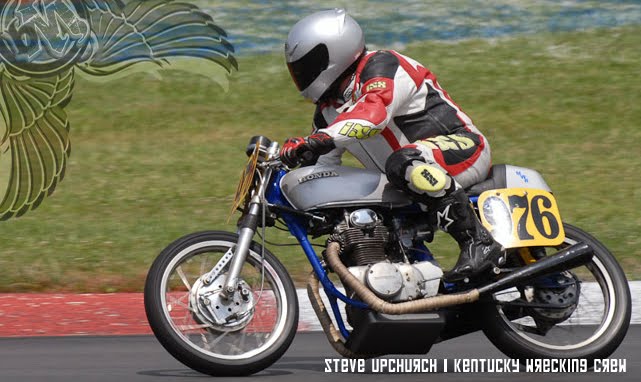 Well, we found a team and they kick f***ing ***. They call themselves the Kentucky Wrecking Crew and are comprised of quite a motley bunch that race vintage Honda, Yamaha, Triumph, Ducati and Bultaco (!) motorbikes. Steve Upchurch, the poor chap who’s been tasked to interface between his team and me, took the AMA #1 plate at the Mid-Ohio Vintage Festival last year, while another member, Chuck Skarsaune has held multiple National Titles.

A week ago I got an email from Steve to tell me a bit about himself and what he rides.

In the four years since he started racing he’s racked up numerous class wins with WERA and a few podiums with AHRMA. He runs four engines, has had two crashes and wears two sets of leathers. To pay for all of this madness, Steve owns a small engineering company doing machine predictive maintenance.

Steve mostly races a couple of vintage Hondas. First is a 1970 CB350. The bike is built out of three other motorcycles. The engine has a Mike Wells Racing ported head with Kibblewhite machine valves, guides and valve springs. It uses Todd Henning Racing Wiesco pistons that bump the compression ratio to 12.5 to 1. The camshaft is from Megacycle. The ignition system is from THR and runs a PVL magneto. Carburetion comes from Mikuni 34mm carbs. A set of custom-built headers and mufflers make it breathe. The front fork is a Betor road racing set up with a Honda 450 front drum brake with shoes from Vintage Brake. The bodywork is all custom and the wheels are Excel aluminum with Dunlop race rubber.

Steve’s other bike is a 1971 Honda CB450. The bike started off as a pit bike procured from a friend of his and now it has a Mike Wells Racing ported head with a Team Hansen Honda valve spring conversion kit. This kit replaces the torsion arms for valve actuation with conventional valve springs and keepers. The valves also have oversized faces with small stems (5mm instead of 7mm).

A very cool thing about this bike is that it uses custom built intakes made by the Logan County High School afternoon shop class. Go punk kids! The intakes they made extend the 34mm Mikuni carbs back from the head to keep them cool and to “swirl” the mixture before it hits the intake track. That’s f***in’ rad.  High school.  I can’t wipe the smile off my face.

The pistons are Toad Town Racing oversized pistons that bring the compression ratio to 13 to 1. The transmission uses a Todd Henning Racing close-ratio 5th gear for more acceleration. Ignition comes from a Toad Town Racing/Electrix magneto system. The engine is cooled by an external oil cooler/filter system built by Capallini. This system does away with the engine’s internal oiling system that feeds up the head bolts and directly feeds the Megacycle camshafts. The frame is the stock frame that has been heavily modified and braced to stop frame flex and cracking. Front fork is a Race Tech-built CB500 unit. The braking is by a four leading shoe Suzuki GT750 unit.

We’ll get an update on how the teams fared in Talladega last weekend as soon as I hear from Steve. When I find that KWC wailed on Flat Rat (Charlie wrecked his bike a week before the season even began!), I’ll be the first to laugh!