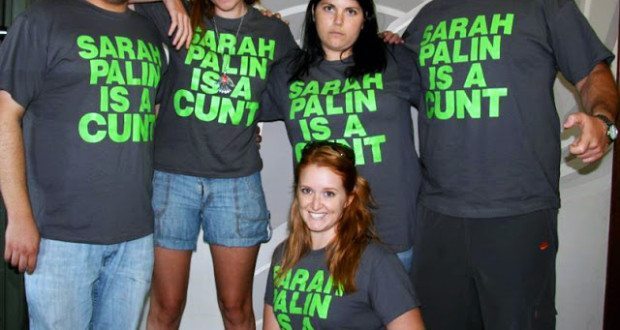 As I often do while drinking beer and surfing the web, I discover a builder who’s just getting it on, and seems to be giving Dirk Diggler a run for his money. New guys are fun to find, and the following is an interview with Jay of Vintage Customs. He’s in Florida somewhere. Orange Someplace…. who cares. It’s Florida. That’s America’s ****.

Why is it when I type in “homer simpson america’s ****” in Google image search I get pictures of Sarah Palin? 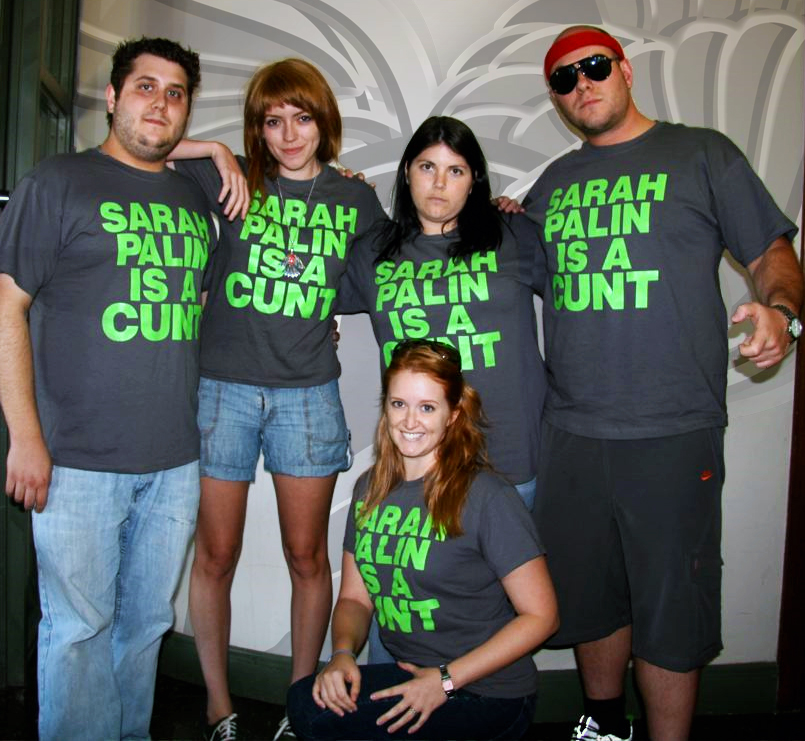 Jay is also building a relatively gnarly xs650 rat bobber/chopper thingy. He was almost done when I asked if he’d like to do a short interview and he replied that he could finish the rat and get nice photos to me this week. Somehow during our conversation he mentioned that he knew a transvestite and, as you can imagine, I thought that having a tranny drinking beer while posing with the rat bike would be really f***ing cool. He disagreed politely. I can only do so much, guys. I’m really sorry. Really.

Therefore, here’s the short interview with a few questions I tossed at Jay, who should have known better:

JL:  Well, the change from graphic artist to bike builder was dealt to me, just as it has been to many others, by the wonderful economy. Graphic Artist positions were few and far between when things started slowing down where I was working. It wasn’t long until the company closed down completely. I had already been building bikes as a hobby for about a year prior to my layoff. As things had slowed at work and my hours were cut, I spent more time wrenching on my bikes. It got to the point where I started calling off work to build bikes at home, so when the news of unemployment came, in my mind it was a sign that maybe it’s what I should begin to pursue. It’s been a little over a year now and my business and my work have grown and progressed at a surprising rate. 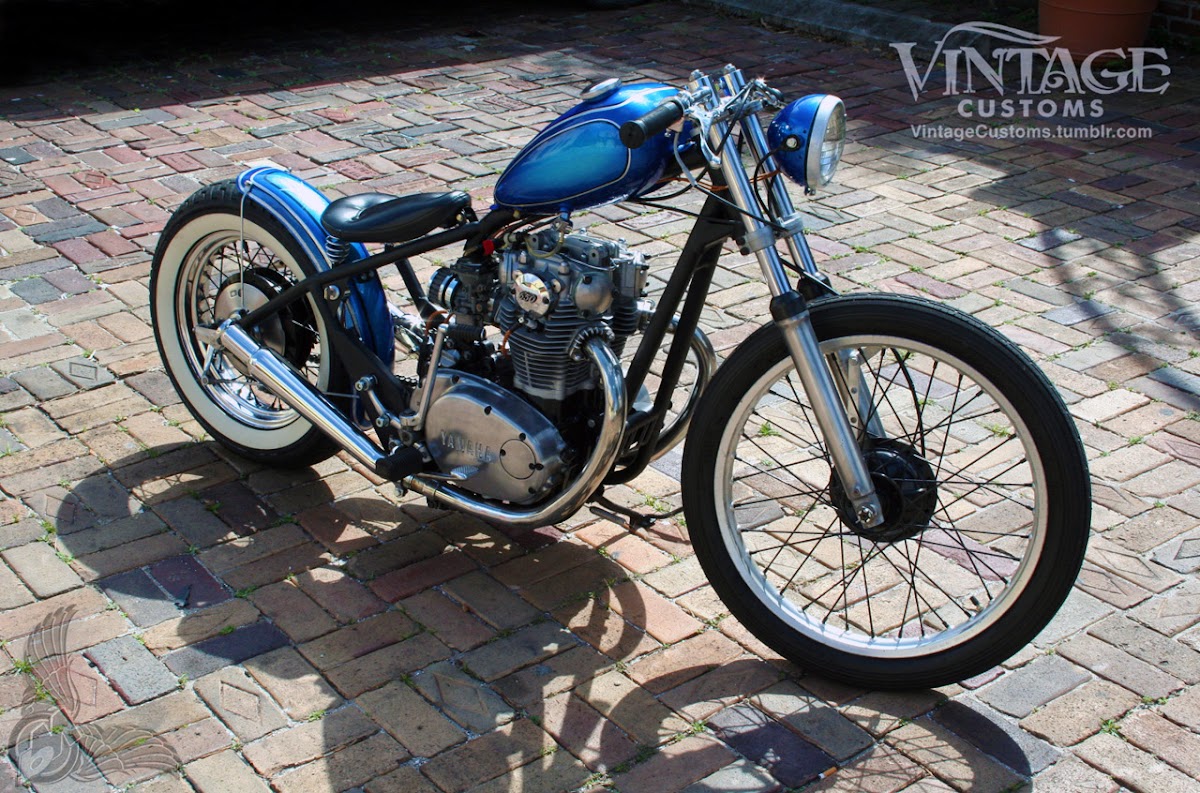 bM:  Yes. That’s why I’m a mad poet instead of an art director. It’s better this way. My soul is brighter and my shoulders are lighter. What is similar about graphic design and motorbike design?

JL:  Well, I wouldn’t really compare the two but I like setting up the shape of the frames, paint schemes and the overall look of how the bike will eventually turn out. I often use some of my graphic programs to “draw” scaled versions of possible frames and tank choices. I’m a minimalist at heart, so I like everything to be really clean and tucked in or tucked away. All of my bikes use very low handlebars, it’s little things that I want to appear as clean and pleasing when you see the bike as a whole. 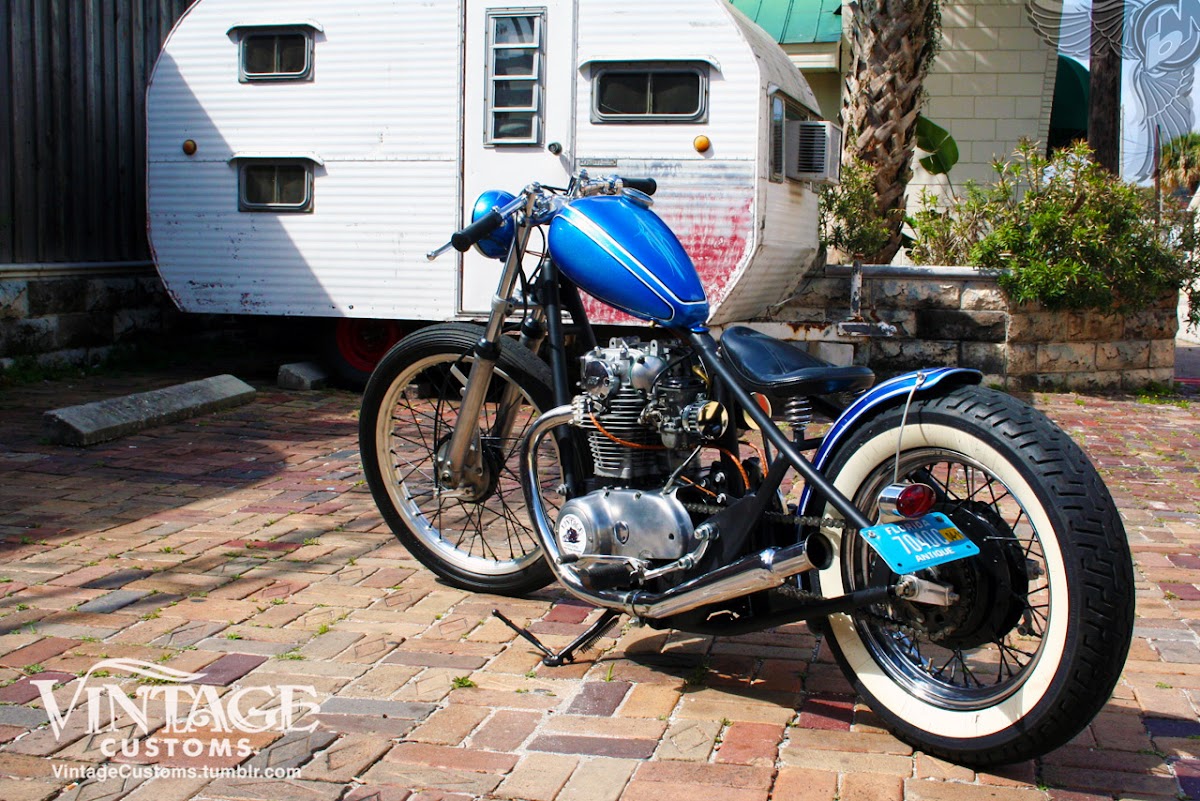 bM:  Did you say something about a beer and *******? I’m sure you did. So…. beer. Three groups. Please choose one from each (Jay’s choices are in bold and orange for the reader):

JL:
A) in the afternoon
B) in the eve or weekends
C) any time i feel like it 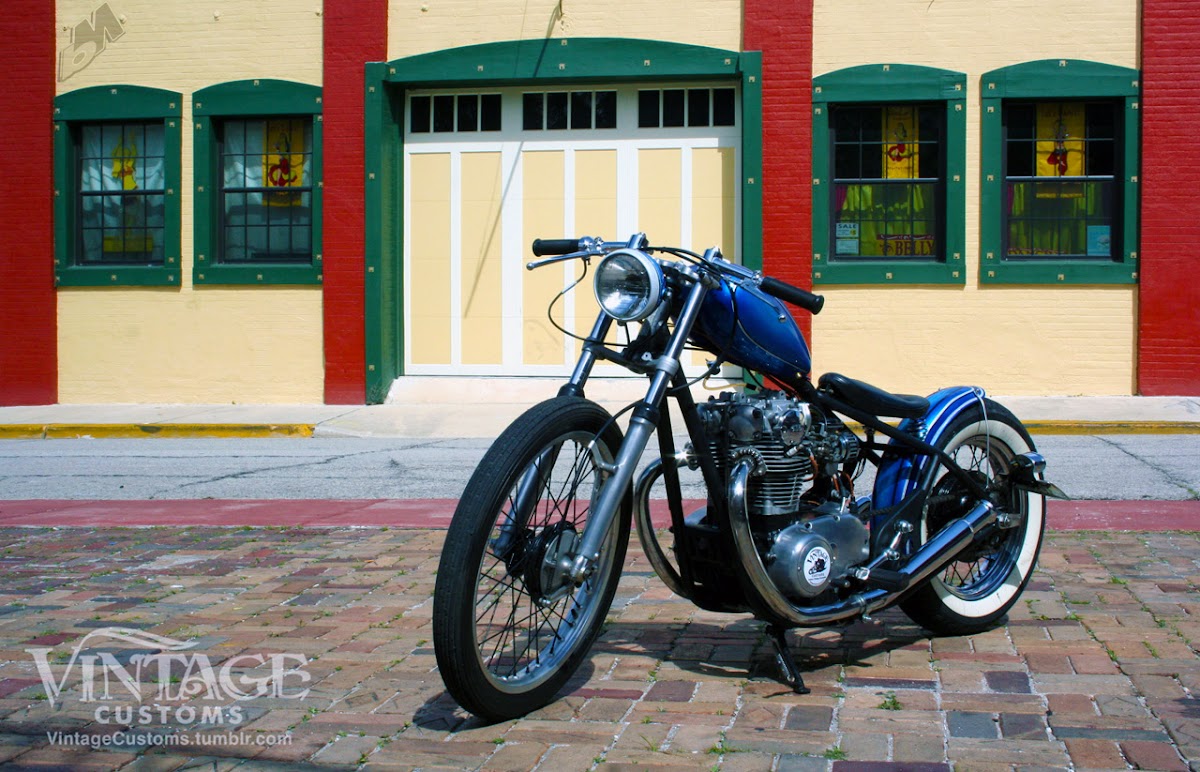 bM:  Nice. Okay now, please finish this limerick: There once was a man from Orange City…

JL:
Who wanted to build bikes so pretty
Wrenching away
Nearly every day
Turns out they weren’t too s***ty.

bM:  Oh man! You were supposed to start with “titty!” Wanna see my version? No? Okay:
There once was a man from Orange City
Who made bikes that got beads more than *******
But his tranny was out
Though he knew without doubt
That his ‘sickles were badass and gritty.

You got a problem with that? Okay.

(Note that the following pix have neither a drunken tranny nor some other stuff, as the bike is not quite complete. But either is a tranny! Anyway, Jay still has to finish the brake setup and then he’s going to run a Holley single barrel carburetor on it. F**k yeah. That will be cool. He calls it “The Undead.” The original name is in Spanish bit if I recall it’s translated as “matar a todos los banqueros.” )

What is your favorite part in building a new bike? 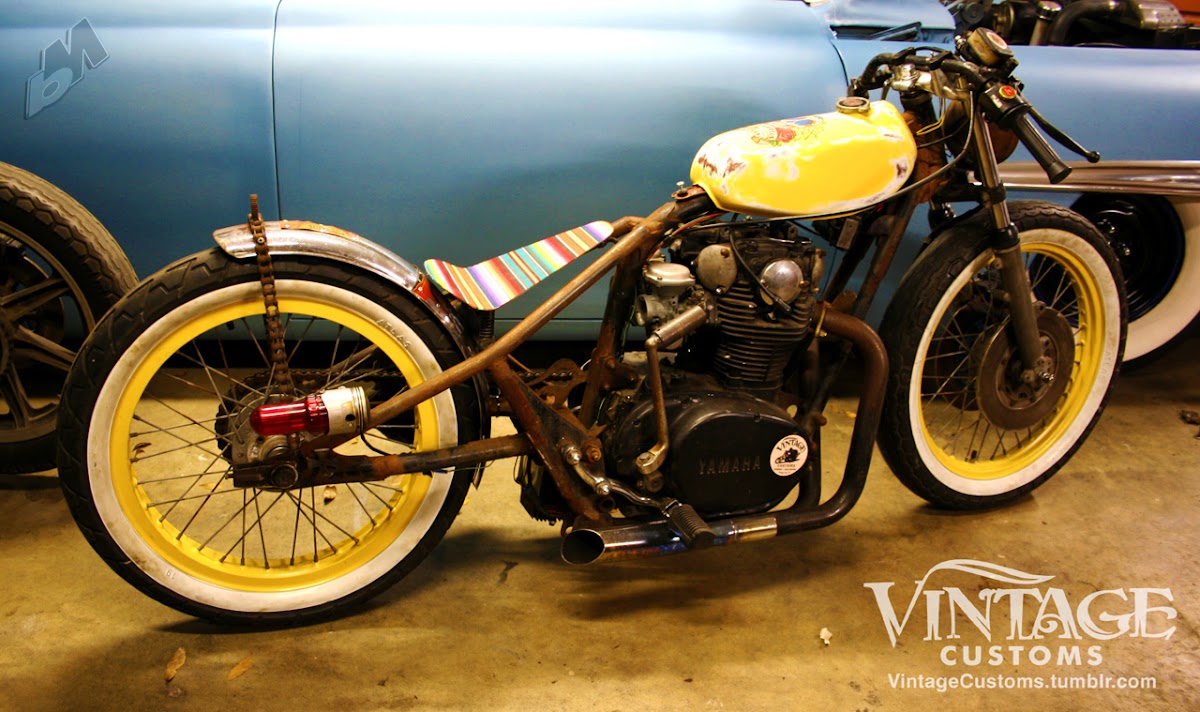 JL:  Favorite thing about building a new bike is the setup, the overall concept of what it’s going to look like. I love when I get all of the parts mocked up and it all just looks right!

bM:  Do you have a favorite style of bike to build?

JL:  Not to jump on the bandwagon of bobbers and cafe-“esque” type bikes, and I know the whole bobber thing is overused and has saturated the mainstream with just about anything, but it’s a good look. Like I said, I’m a minimalist, so the more stripped down the better. 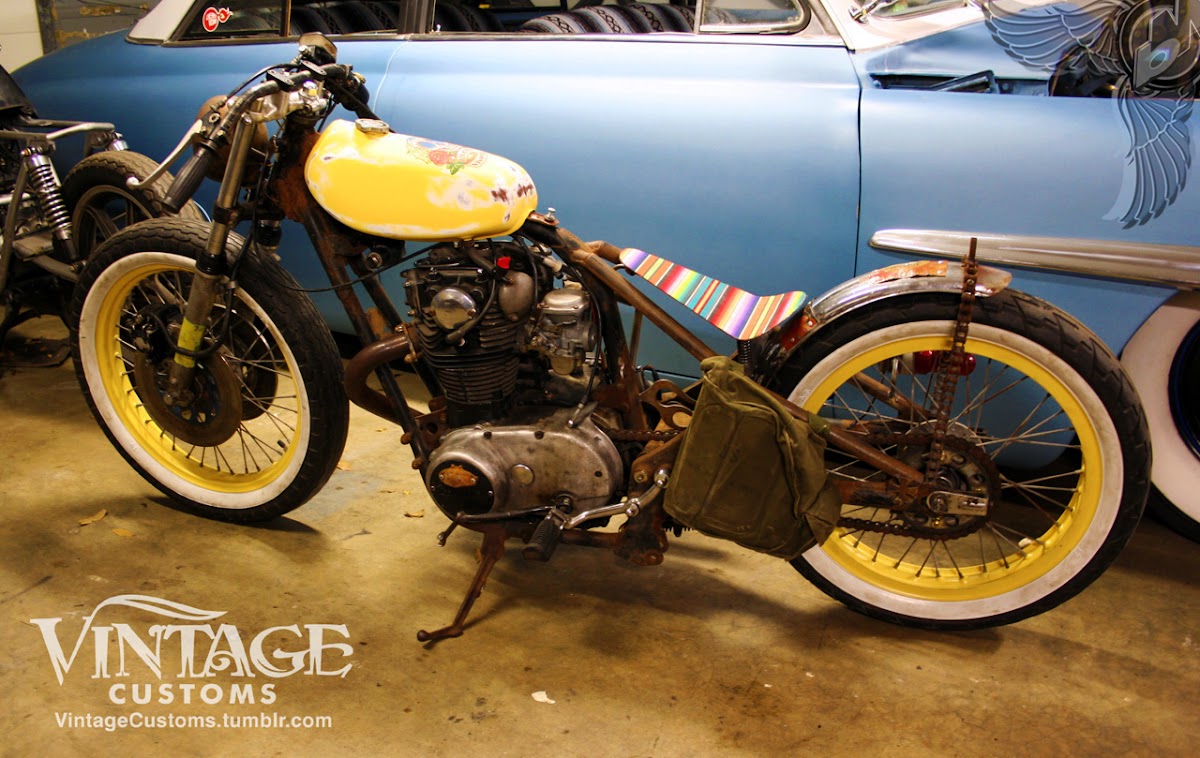 bM:  Perfect. Regarding the “stripped down” element of your bikes, let’s go to another B word, babes. In leather or in vinyl?

Make sure you visit Vintage Customs and send him pictures of hairy men in ladies clothing!