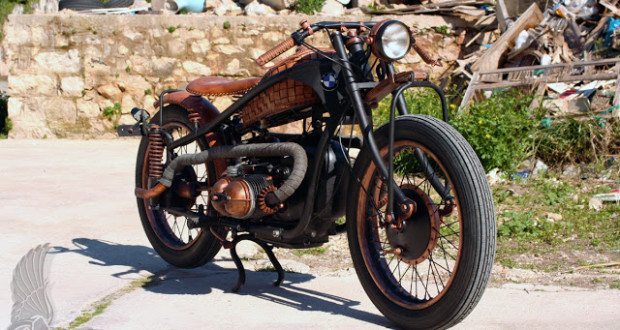 all the leather work on this r51/3 bobber was done by my friend elias dairis (click that link, please). he’s a young greek leathersmith and he designed all of the dead hide you see on this ride by hand. he also took the photos, and a friend of his wrote a great foundation of what you will read in this post: 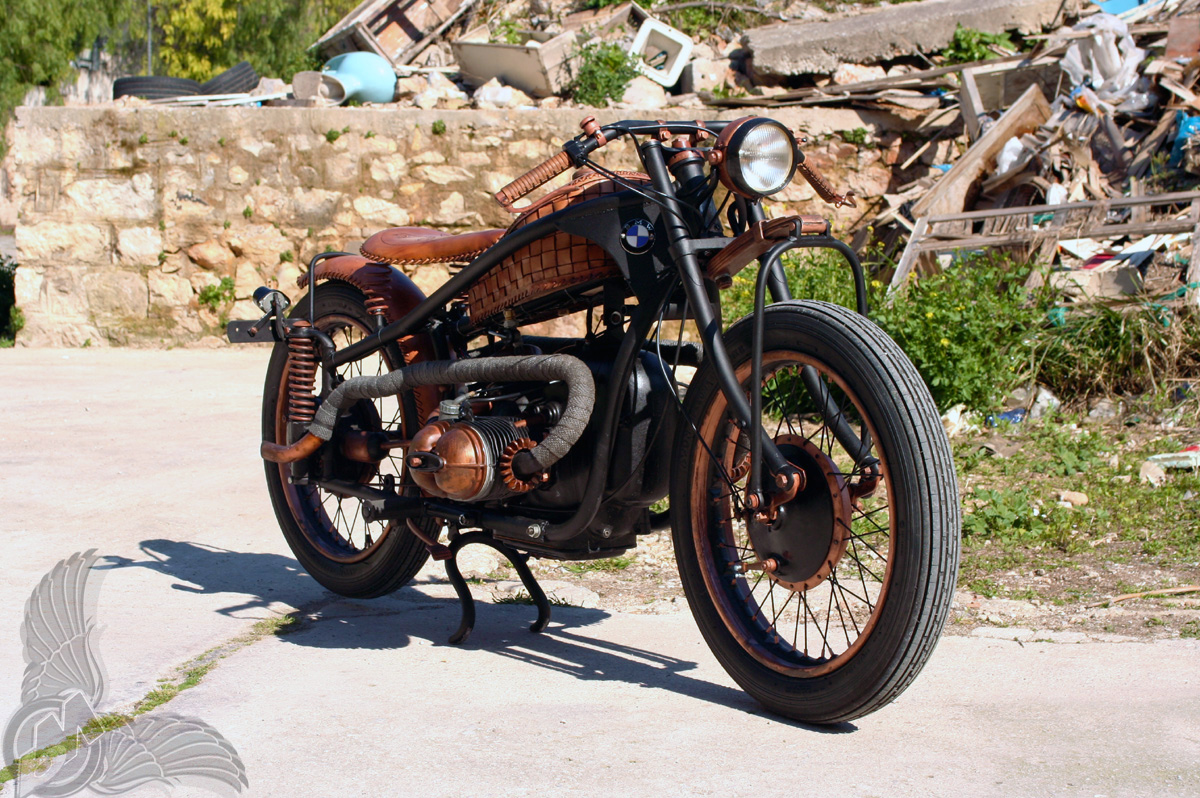 hugo ferraro has been into vintage bikes for years and especially plunger beemers. after owning a largely stock bmw r51/3 for years, it was time for their relationship to move to another level. he decided to chop the bike and transform it into a mid-1930’s styled bobber, but in a more unique way than most would conceive. 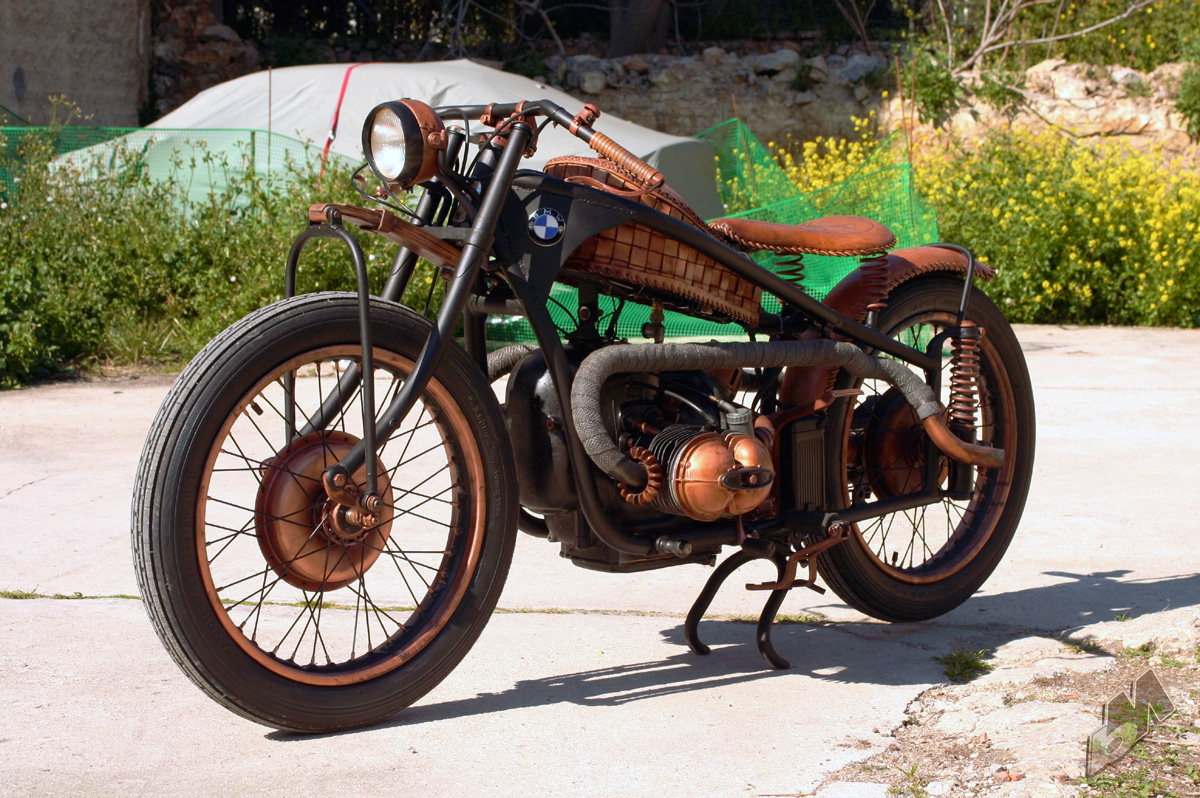 the upper part of the frame was cut and turned into a cradle to hold a diamond shaped custom fuel tank some might call coffin-shaped. it’s reminiscent of the 1934 bmw r7 art deco streamliner, but in a very chopped way. slick idea.

the standard front fork was cast aside and a hand made sping leaf front was fabricated instead. lots of leaf springs happening suddenly. i blame arpad.

the rims and hubs are standard 19” bmw wheels and fitted with more appropriate vintage-style avon tires. 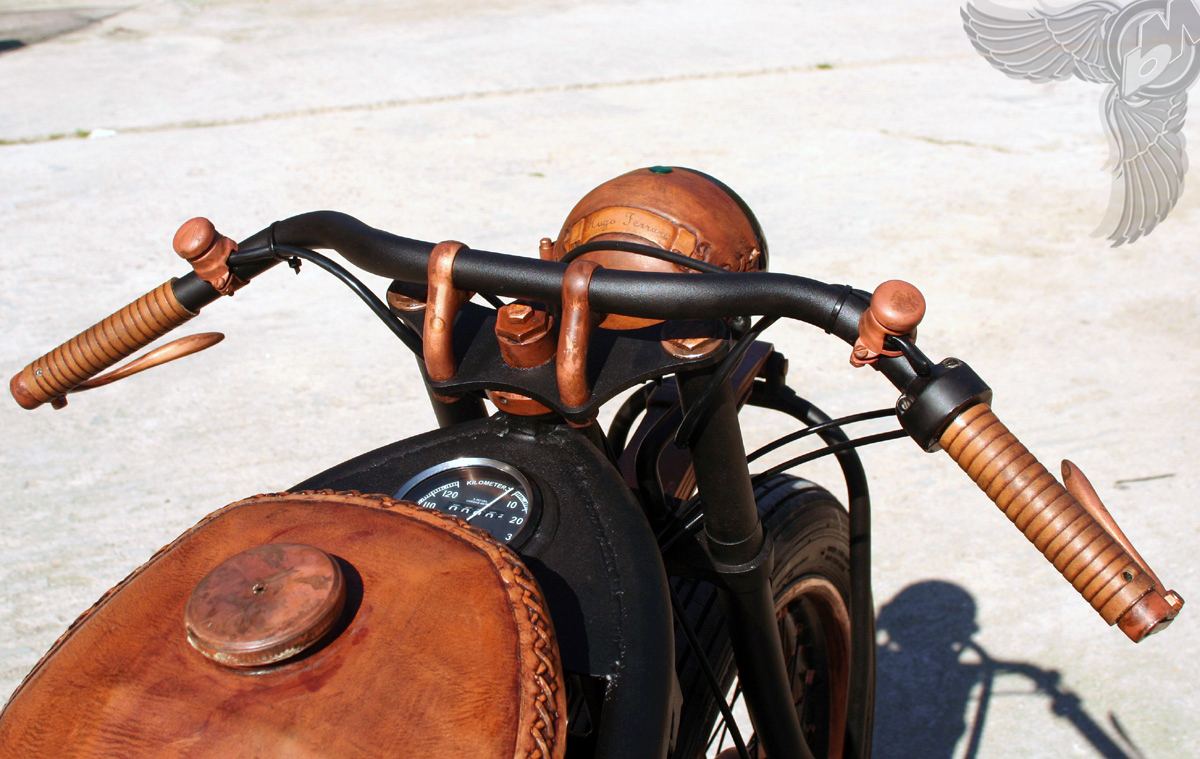 the rear fender is off the front of some japanese bike and adds to the minimal look of the bobber. elias (aka luie leather), a very talented and imaginative leatherman and a close friend of hugo’s, decided that the bike should be covered with leather instead of paint as originally planned. hugo agreed and gave the tank, seat, rear fender and the headlamp to luie, leaving him to work absolutely free of instruction. he worked day and night for over two weeks to create what you see here. 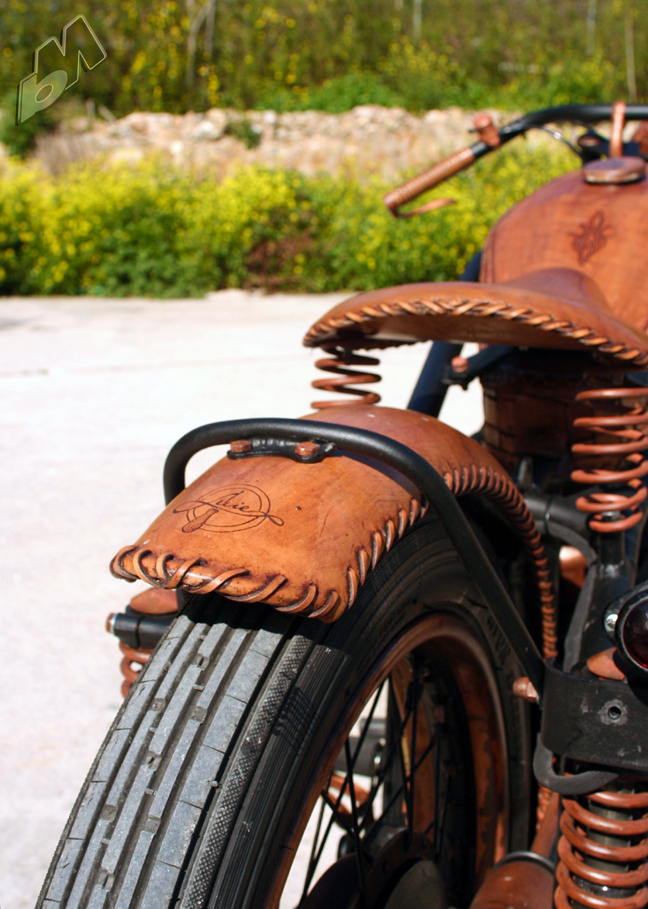 meanwhile, hugo had time to rebuild the engine, gearbox and final drive. the crankshaft of a bmw r50s was used since it is lighter than the standard r51/3, and it was combined with “special” pistons in the motor as well. the camshaft is off an r68 while the carburetors from the r51/3 remained. 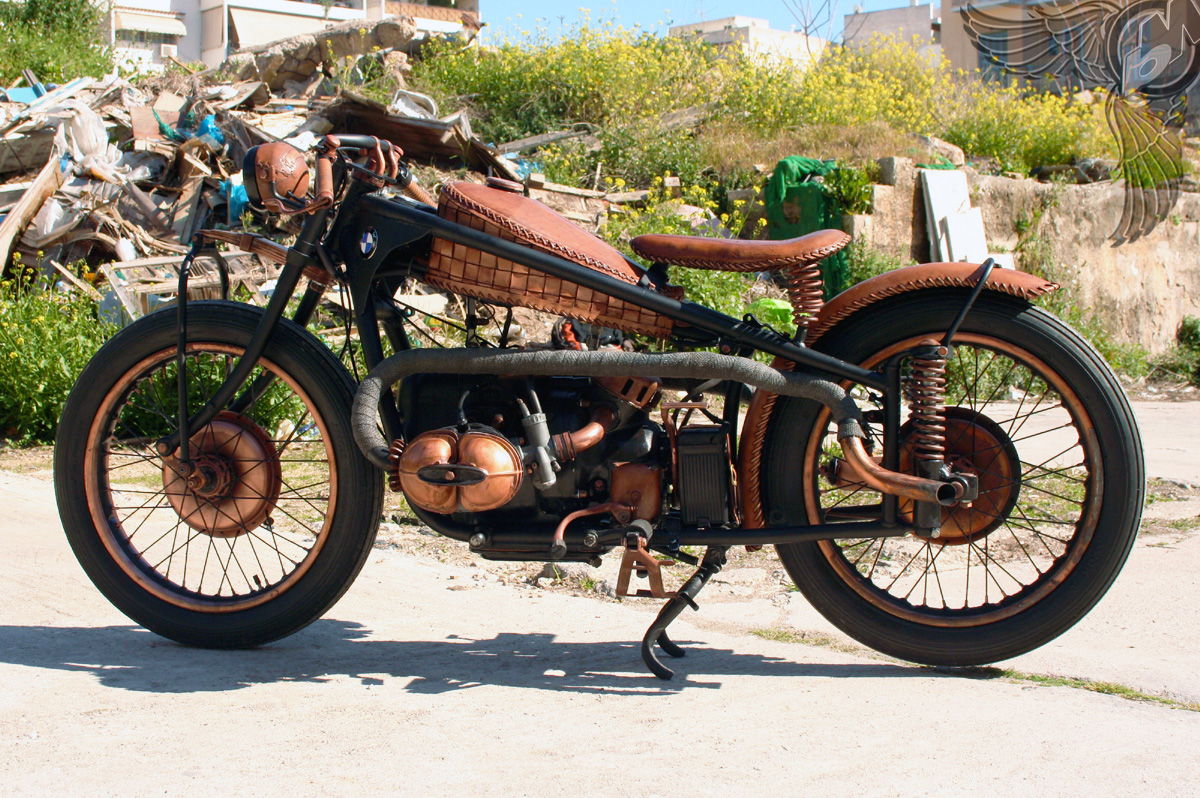 with the engine done, a gearbox from an r67 was used instead of the original because it would give a better power ratio in combination with the r68 final drive. the estimated output is 35hp. while that may not sound like much, the standard r51/3 output was only 23hp, which gives hugo’s beemer bobber an increase of nearly 50% more power. not bad for a 50-series boxer. many parts were copper plated to give a more vintage look but what nobody could imagine was how they’d match with the leather parts.

elias’ work is straight-up killer. the leather covered tank matches the plated cylinder head covers and the leather headlight assembly and reverse copper control levers on the handlebars are just a few of the many details that make this a very unique and, in my eyes, a beautiful bike. i’d curve the exhaust down to align with the top tubes after they pass over the cylinders to give it a cleaner look, but that’s me and this is not my bike. i’m sure there is a reason why it was done as it was.

as it stands before you, incredible leather, copper, good engineering, imagination, and passion were the basic ingredients of this badass one-off bmw bobber. 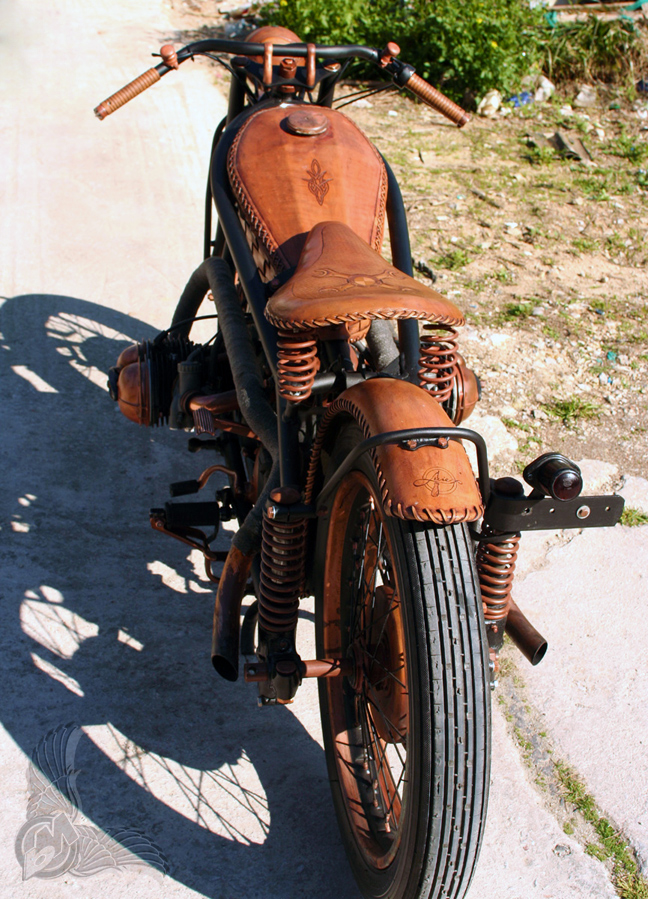 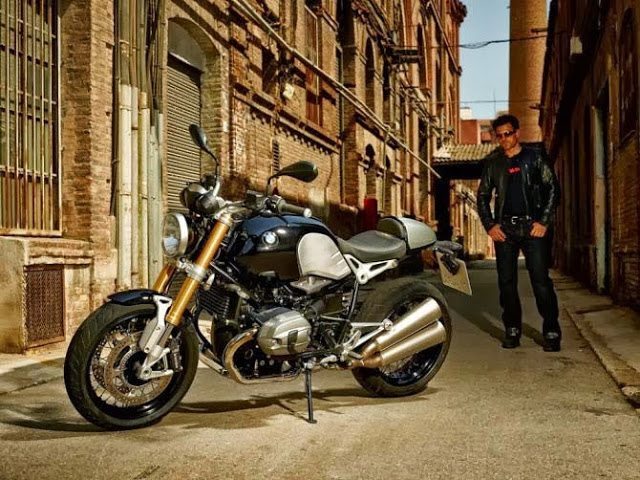